How One Philly Company Navigates the Politics-in-the-Workplace Minefield

With this country’s increasingly tense and frenzied news cycle, it’s impossible for politics to stay outside of the office. Here’s how Stitch Data turns controversial lunchtime discussion into learning opportunities. 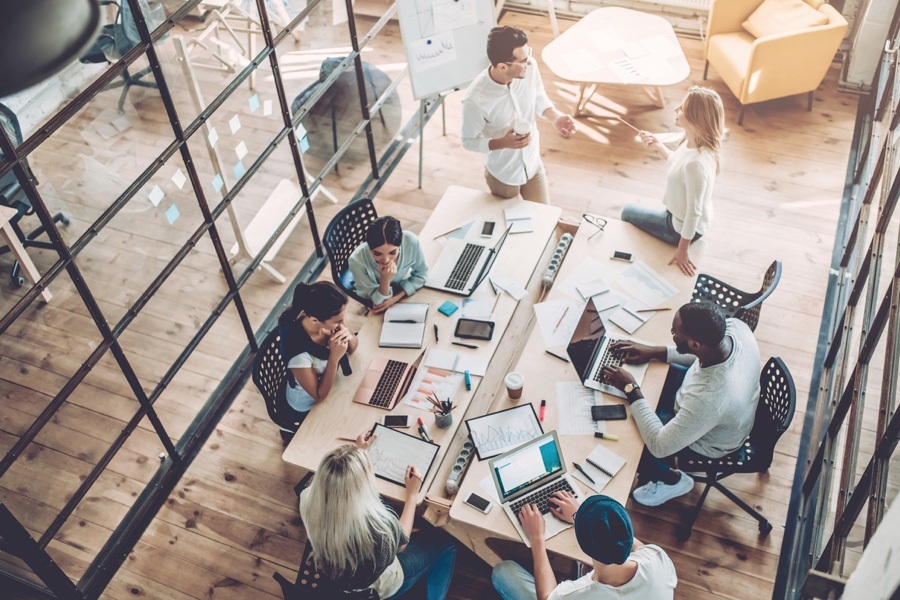 The government shutdown may now be behind us temporarily, but its aftermath has us reeling. And with the 2020 election on the horizon, our offices remain key locations where political events get dissected through dialogue. But with various opinions floating around, discussion can become tough and circuitous. Employees at local data management company Stitch sit down and have lunch together every day, and politics have never been off the table. BizPhilly talked to Stitch’s director of People Operations Samantha Glasberg and Stitch CEO Jake Stein about how the team tackles the politics-in-the-workplace minefield and the strategies the team uses for productive conversation.

BizPhilly: How often does your company discuss politics?

Glasberg: Because of our company culture, people often feel very comfortable speaking openly about politics. It’s not something we avoid, but we also don’t necessarily set aside company time to encourage these discussions. Usually, they occur organically in meetings or over lunch.

BizPhilly: Have you provided employees with rules or guidelines for talking about politics at the office?

Glasberg: One of our core values at Stitch is DTRT — do the right thing — so we would expect our team members to utilize this as a guiding light when engaging in sensitive conversations such as these.

We like to say we encourage our team members to bring their whole selves to work. So, you’re not just an engineer or a designer or an analyst. You’re also a person and a family member. I think the culture it adds, the perspective of yourself outside of work, you can bring your outside self into the workplace.

BizPhilly: How have you seen recent discussion impact the workplace?

Glasberg: The way it can hurt is that we have people with very different opinions, very different voices on politics or religion and any other number of topics. You can get into a really heated argument about that or try to change a coworker’s mind about something that’s supposed to be their personal belief. But it may hurt your ability to work with that person. We try to find a balance between those things and encourage conversation and potentially some debate. We don’t want it to get to the point where someone is coming away offended in their working relationship. Ideally you can be friends with all the people at work, but it’s more important that you have a productive, professional relationship with them and then friendship is a very nice bonus on top.

Stein: I do think that the industry we happen to be in — the tech startup world — is not representative of America as a whole. To be transparent, there are not a whole lot of Donald Trump supporters at a technology company. Or if there are, we just don’t notice. I think that there’s definitely a healthy disagreement, but it’s definitely more uniform than the country.

BizPhilly: What are some strategies you’ve identified for successful political discussion at Stitch?

Stein: It’s important to remember that a political opinion is a personal belief. In political discussions, there is often a strong desire that surfaces to try to influence others to see (and agree) with your side. Work is not the right place to do that. Emotions run high in personal beliefs. If you can’t remove emotion from the equation and respect that others are entitled to their own opinion, I would likely recommend that an individual avoid engaging in political discussions. Otherwise, you risk jeopardizing a relationship with a colleague.

That said, I do believe that these conversations can happen successfully if people remove the desire to sway and instead, focus on respectfully hearing out their colleague’s perspectives. By asking questions, seeking out areas of agreement, and showing respect, an individual is likely to be much more successful. If you can remain neutral, engaging in a difficult conversation such as this can provide a great opportunity for personal growth and relationship building.

Glasberg: When things are extremely difficult, it’s important to set out a separate time and place and acknowledge that this is a tough issue. We use Slack like a lot of other companies. Sometimes we dedicate a channel to a particular topic so the people who are interested in that are welcome to join or the people who aren’t are welcome to opt out. It’s nice because it’s an ongoing conversation. There’s no having the last word on Slack, you just say something until someone says something else.

Another thing that I try to do is I have office hours every week on 4pm on Fridays. I just go sit in the kitchen and I post on Slack a couple of random conversation topics and try to explicitly say I’m also happy to talk about anything else. It’s Friday afternoon, so a bunch of people have a beer and hang out or a bunch of people will do their work half in the conversation half out. I think it’s nice because it’s really hard to say to people ‘No you can’t talk about that.’ I think it’s a little easier to say this time and place is not right, but this other time and place is much better. To provide those outlets for that conversation in a place where its open and welcome, I think that makes all the other conversations a little bit easier to not get out of hand.