In between delivering legal documents and fish — yes, fish — on his Kona hybrid bike, the 32-year-old South Philly transplant tries his best to bring a smile to your face... and to avoid getting doored. 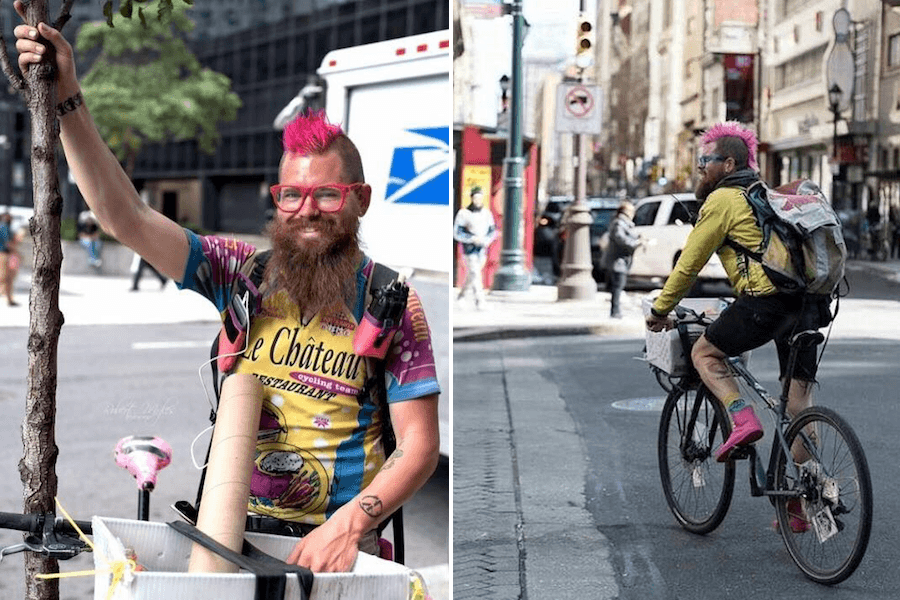 If you’ve spent any significant amount of time riding around in Center City, you’ve probably encountered Philly bike messenger Joe Cox, who, with his bright pink hair and general neon-ness, is pretty hard to miss. Cox, 32, is also the founder of PMA Bike Ride, an organization he set up to “deliver smiles and pizza to the hungry on the street.” Here, he tells us all about it.

I grew up in… Salisbury, Maryland, which is just before Ocean City. I actually biked there about a month ago. 135 miles. It took about ten hours.

My first bike was… a yellow Huffy with a radio attached to it. I got it for Christmas one year when I was a kid.

Most of what I deliver is… legal documents or drawings.

The weirdest thing I’ve ever delivered was probably… fish. That was actually on Monday. For the first time, I had a rush fish delivery. Two trout in a plastic bag. They had to go from One Logan to 1521 Locust, and the guy I delivered it to was quite happy. I’ve also delivered blood. And sometimes just lunch that somebody forgets.

I work for… TimeCycle as an independent contractor.

These days, I live in… South Philly at 16th and McKean. I share a four-bedroom house with three roommates and my dogs, Willie and Darwin. Willie is full chihuahua and Darwin is chihuahua-terrier. They are both registered service animals. You can get your animal registered pretty easily if you’ve had depression or anxiety, which I think most people in today’s time have had.

My favorite place to ride to in Philly is… Graffiti Pier. It’s very calming. I sit there, it has a perfect view of the city, and you can just chill. It’s an easy break from all of the noise. You cannot hear the city very well from there.

My lunch is usually… protein bars or pizza. I’m vegetarian though try to eat vegan as much as possible. 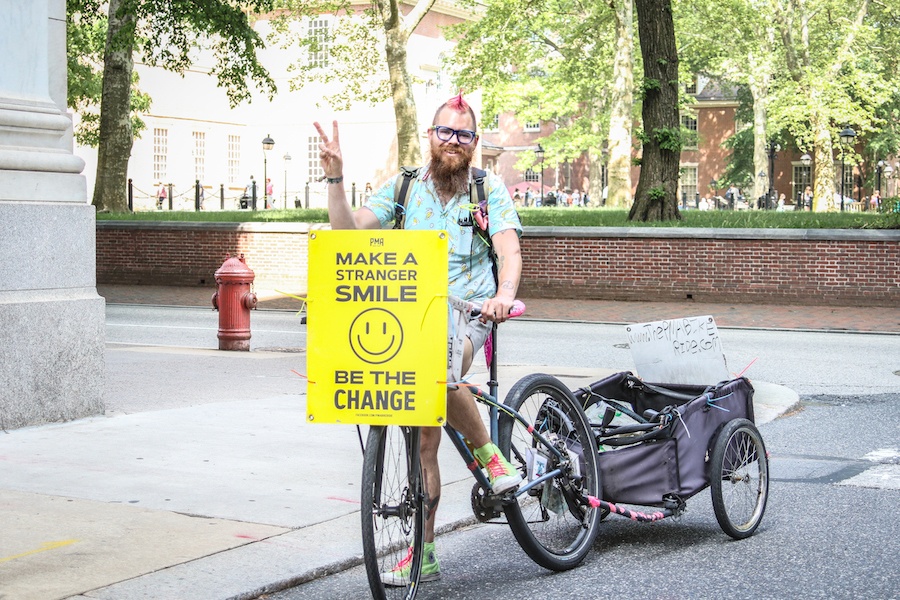 PMA Bike Ride is… a pizza party for the hungry on the street. Spreading positivity through pizza. PMA stands for positive mental attitude. We ride around giving out pizza from Rosa’s or Cacia’s to anybody on the street in an effort to brighten people’s days. I started it in 2016, and now other people around the country are starting to do it.

My first tattoo was… a broken peace sign. I’m up to 18 now, I think. I have my first courier number tattooed on me. I have a monkey on a bike. I have a “share the road” bike sign on one leg, Bobby Hill on the other. And sideshow stuff, like a bearded lady and a monkey with cymbals.

I wish that Philly drivers would be more… attentive, especially since Pablo was just killed. People don’t seem to care about each other. People can’t wait just one second. My worst injury was actually from a pedestrian who was jaywalking. I hit the brakes and tried to avoid them and flipped over my handlebars and broke my shoulder.

Drivers are also just very rude. Not long ago, right across from Hip City Veg in Rittenhouse, a guy swung his door open without warning. Fortunately, I was paying attention. I yelled at him. He got in my face, said he didn’t see me. Exactly. He didn’t see me. He didn’t see me because he didn’t look. I’m not hard to see. If you can’t see me, you really shouldn’t have a license. I’m like a billboard.

The best part about my job is that… I get to ride a bike all day and make people happy. Just the PMA Bike Ride sign alone makes so many people happy.

The worst time to bike around the city is… in rush hour when it’s raining.

If you’re going to start riding a bike in Philly, my advice to you is that… you dress as bright as you can and get all the lights on your bike that you can get. And you really need to be very defensive but also very offensive. You’re allowed to take the lane, and that’s what you have to do, even though people don’t want to let you do it. The law is a four-foot zone.

The story with my hair is that… I just like bright colors, and I’m a little odd and weird.

My favorite bars in Philly are… Bob and Barbara’s and Tattooed Mom.

If I were mayor, the first thing I would do would be to… give people a living wage of $15 an hour.

The next PMA Bike Ride event is… this Friday, actually. We’re biking to New York and doing it there on Friday and Saturday and then we’ll be doing it back in Philly on Monday before the Andrew W.K. show at Union Transfer. He is the king of PMA. There are always bad times, but even in the bad times, you have to look at the good.