How I Built a Home Gym in My Tiny, Gross Rowhouse Basement

It's not pretty, but it gets the job done. 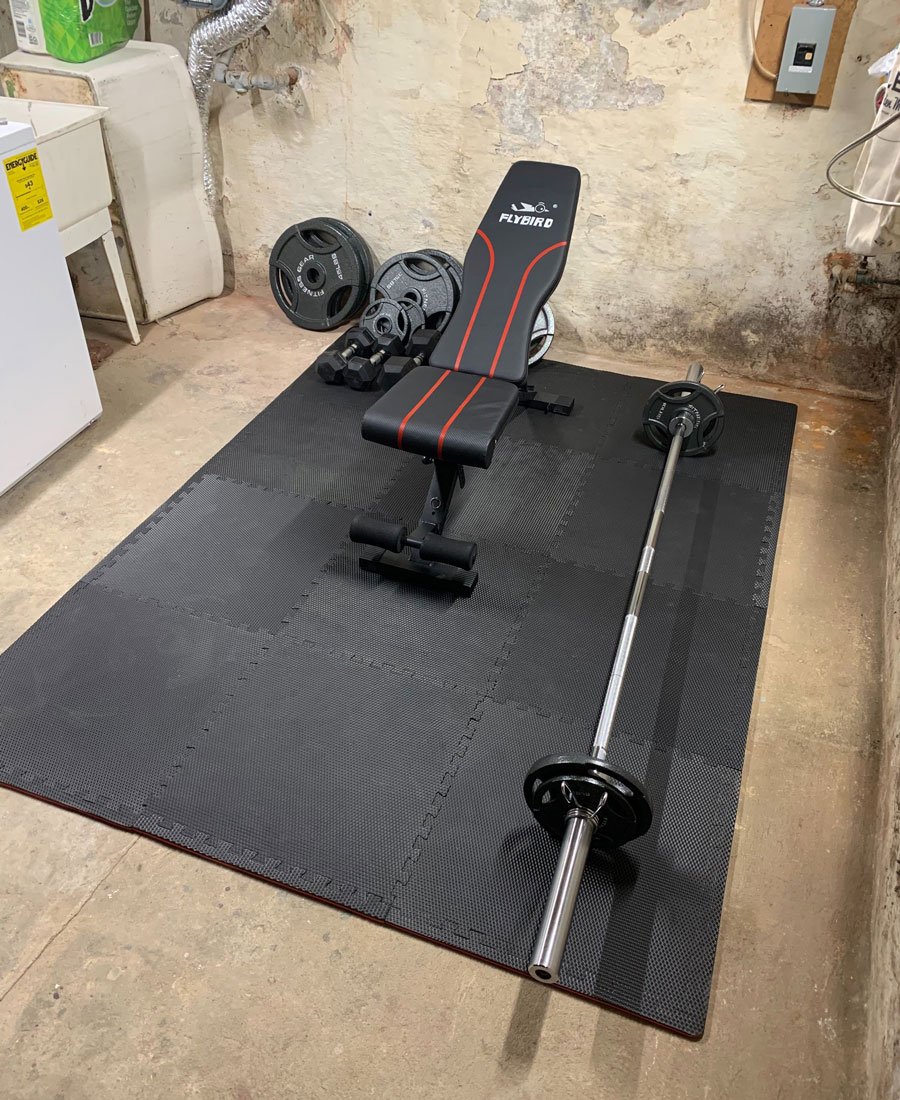 It’s not pretty, but my rowhouse basement gym gets the job done. Photograph by Caroline Cunningham

I, like many Philadelphians, have a garbage pit of a basement. The ceilings are low. The floor is dirty concrete. The walls are cracked and peeling and seem to be continually shedding little piles of brick-colored dandruff.

It’s your typical 12-foot-wide rowhome bunker that, until January, was only used to house my husband’s table saw, our laundry machines, the litter box, and a mountain of trash bags filled with demolition rubble from a renovation project that we hadn’t yet figured out how to dispose of.

But shortly after the holidays this year, my husband and I decided to turn our little hole in the ground into a workable home gym. At first, I was excited about the possibility of working out at home, where I’d never have to fight someone for a weight bench. Little did I know that in a few months’ time, I’d be more thankful for this space than ever.

Now, of course, we have a few things going for us. For one thing, we have a basement. Having spent the previous year and a half living in a roughly 400-square-foot apartment, I don’t take the privilege of having extra space lightly. For another thing, our basement doesn’t appear to flood (yet). And finally, given that we did this right after the holidays, we had some Christmas money to invest in it.

That said, if you’re looking to do something similar in your tiny, gross, dark, sad little basement, here’s how we got it done.

Start With the Floor

After doing some intense sweeping and vacuuming, we set about installing some gym flooring. Foam tiles — which will keep your weights from crashing down directly onto the concrete or whatever other flooring you have installed — can be found easily on Amazon and Walmart.com. We bought sets of these reversible tiles, which we snapped together in a couple of minutes. Buying tiles makes it easy to customize to your space (and to add onto, should you someday have more square footage to cover).

There’s a lot you can do with body-weight-only workouts. (Seriously — go do a bunch of squat jumps and then try to walk down your stairs tomorrow. I dare you.) But if you’re working towards some strength goals, weights will be an important part of the plan. While you could just go all-in on a full set of dumbbells, for space and money-saving reasons, we thought through the kinds of workouts we currently complete, the weights we use for those, and decided we could always invest in additional, heavier weights later.

Adding weights to your home gym will be one of the more expensive components, seeing as weights are frequently sold for a dollar or more per pound. After doing some shopping around, we settled on sourcing some 15 and 35-pound CAP coated hex dumbbells (we already owned five, eight, and 10-pound sets) from Walmart, which sells them for less than a dollar per pound.

We also invested in an Olympic barbell set to enable some more serious strength training. While many barbell sets we looked at — both from regular retailers and on Ebay and Facebook marketplace — ran in the $300+ range, we found this $240 300-pound set (which included the seven-foot barbell, weight plates, and spring clips) at Dicks Sporting Goods. You will pay, roughly speaking, a bajillion dollars to have a barbell and 300 pounds of weights shipped to your house, however, so I’d recommend choosing Dicks’ “buy online and pick up in store” option. (Dicks is currently offering a “Curbside Contactless Pickup” option at all locations.)

If you’re going to do strength training, you’re going to want a bench. When shopping for a bench, we considered the weight capacity, so that it wouldn’t collapse beneath us, and the width, so we wouldn’t fall off on either side. After diving into lots of reviews, we opted for a $130 model on Amazon (it’s now listed for $180). You can find a similar model for $99 on Walmart.com. (Note: Amazon just announced it will be prioritizing shipping household and medical supplies through April 5th, which means any orders for gym equipment through them may be delayed.)

Based on the fact that I’m a big fan of online barre classes, I picked up a set of resistance bands online that can be used for a multitude of online workouts. If you’re into yoga, add some blocks or straps. If your ceiling is taller than mine, go for a jump rope for some low-cost, small-space-friendly cardio.

There are an abundance of at-home workout apps, online subscriptions, and streaming classes that you can check out. (One of my favorites, Nike Training Club, is free — and it allows you to select workouts based on how much equipment you have on hand.) But now that all Philly fitness studios have been ordered to shut down temporarily, many of them are moving to online classes and Instagram Live videos. At this time of crisis for all small businesses, do what you can to support your favorite instructors and studios financially — whether that be by signing up for an online membership or sending them a Venmo payment for any “free” online classes you take.