In his upcoming book Chasing My Cure: A Doctor's Race to Turn Hope into Action, David Fajgenbaum reveals how he shifted the conversation around research and treatment for the mysterious illness known as Castleman disease. 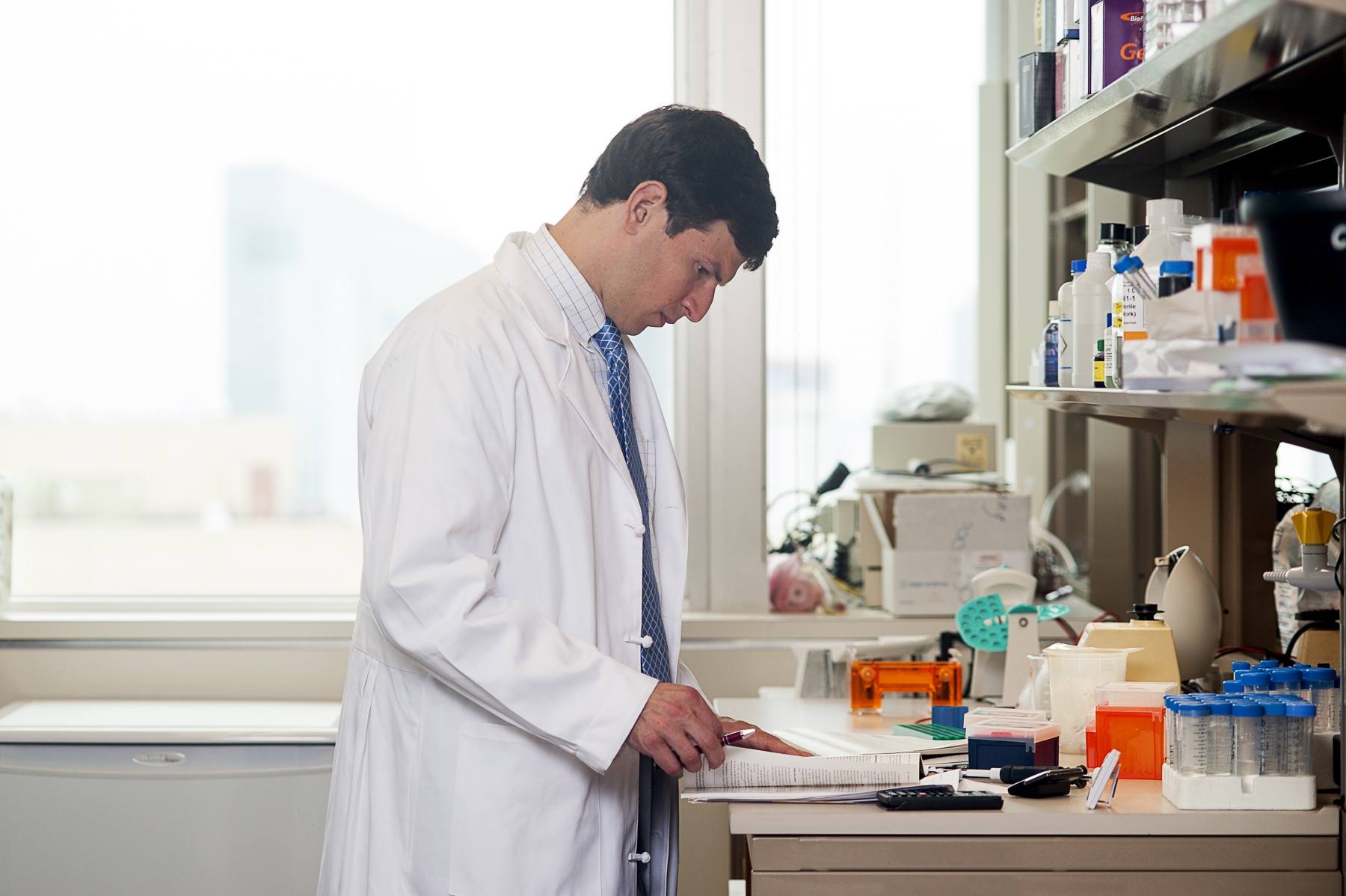 David Fajgenbaum was tired all the time. At first, this seemed like a symptom of a lifestyle, not an illness. He was in his first year of medical school at Penn, regularly pulling 24-hour shifts, surviving on caffeine and the high of helping patients feel better. But quickly, Fajgenbaum recognized that something terrible was going on with his body. “Even with the minimal symptoms early on, I knew whatever this was was unlike anything I’d felt in my life,” he says. “I had this impending sense of doom.”

Turns out his intuition was correct. Fajgenbaum would go on to have debilitating pain due to fluid build-up that squeezed his heart, lungs, and kidneys until they failed. He nearly died four times. Eventually, he was diagnosed with the most deadly form of Castleman disease (CD), a rare disorder so little understood that physicians and researchers aren’t sure whether it should be considered a type of cancer or an autoimmune disease. No one knows what causes onset of CD or the trigger for the severe episodes. 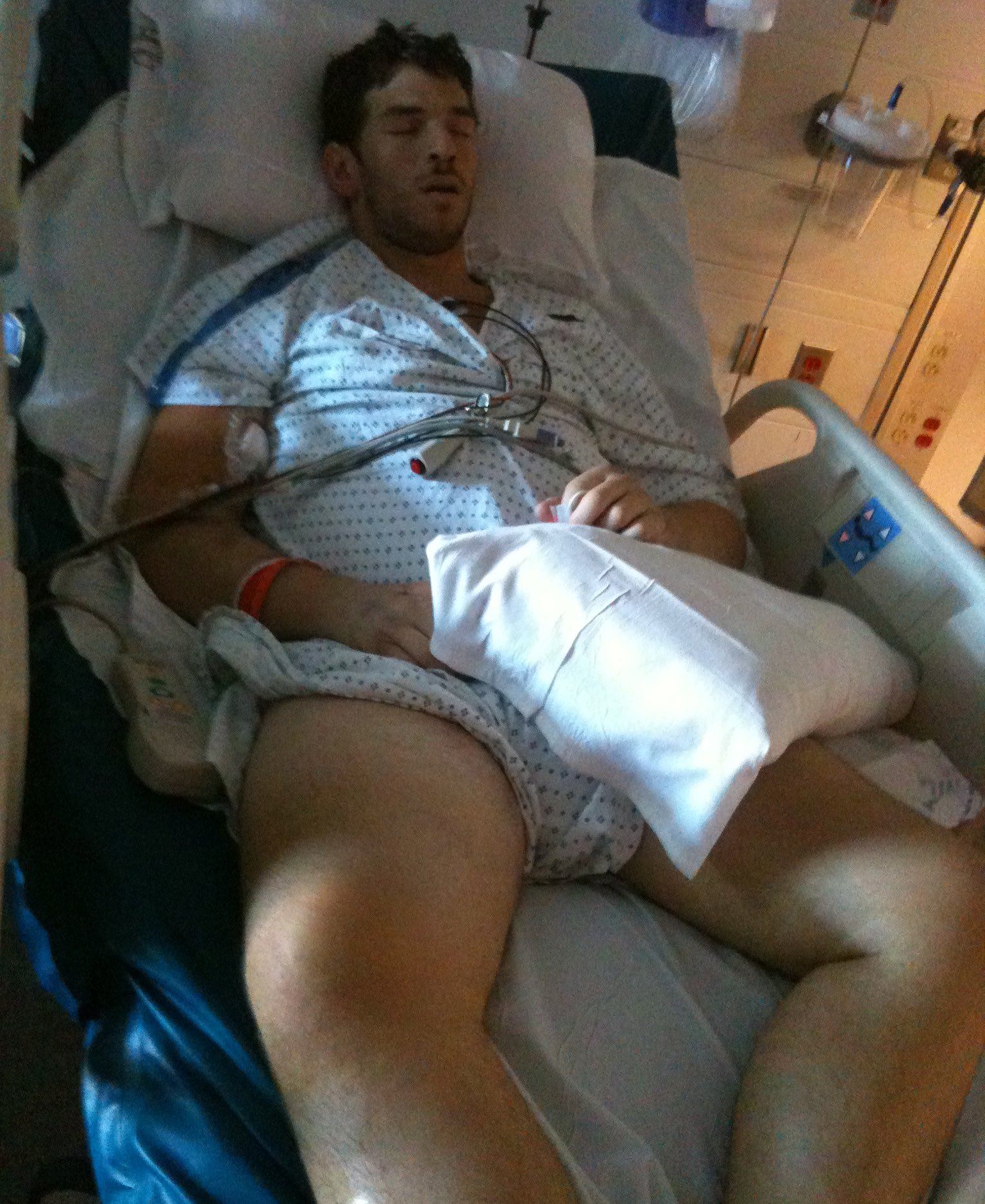 So much fluid built up in Fajgenbaum’s body that his legs and stomach swelled up. / Photograph by David Fagjenbaum 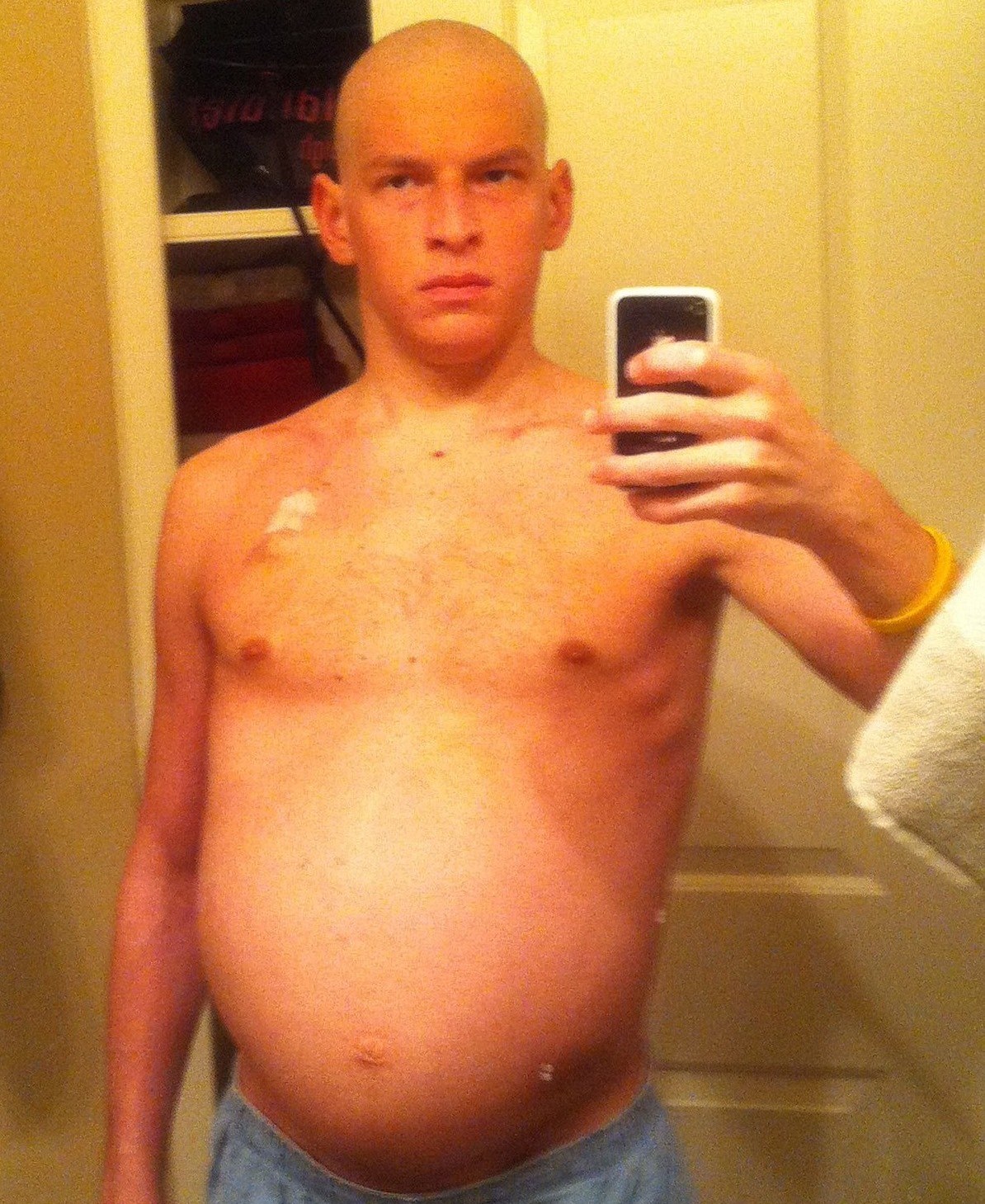 Fajgenbaum’s hair fell out as a result of the intense chemotherapy he endured to get his disease under control. / Photograph courtesy of David Fajgenbaum

Despite CD’s murky status, someone had to be working on a cure for this, Fajgenbaum thought. Or, at least, a treatment to manage it. Indeed, some patients had responded well to a drug called Siltuximab, and some folks were trying to find enough subjects for a clinical trial. But for those, like Fajgenbaum, whom the drugs didn’t work for, the only other option was round after round of intense chemotherapy that had some gnarly side effects of its own.

Fajgenbaum could have accepted his fate as inevitable. After all, he was a lowly medical student – who was he to come up with anything that world-class researchers hadn’t already discovered? Yet the desperation of the situation and his uncanny ability to turn thought into action started him on a journey that has changed not only his future but also the way the entire world approaches the study of rare diseases. 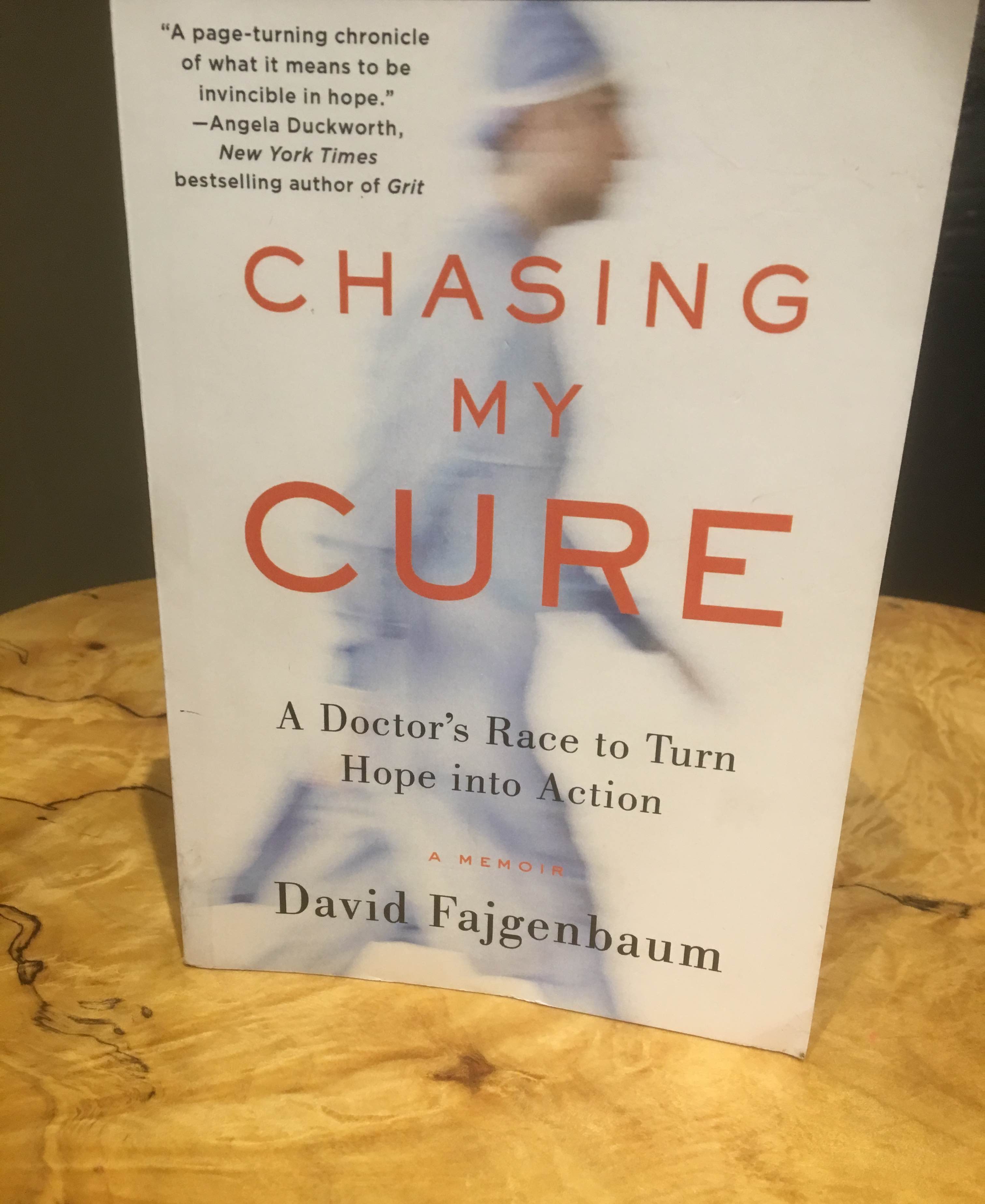 Fajgenbaum’s memoir, Chasing My Cure, tells the terrifying tale of his disease — and how he’s tried to move the research for a cure forward. / Photograph by Mary Clare Fischer

In advance of his new book, Chasing My Cure: A Doctor’s Race to Turn Hope into Action, which comes out on September 10th (pre-order it here), we sat down with Fajgenbaum to talk about his disease, his efforts, and what he’d recommend to those who feel as if all hope is gone.

Philly mag: Can you explain how you felt when you first became sick?

Fajgenbaum: I knew something really, really bad was happening early on, that it would be unlike anything I’ve ever faced. I fulfilled that prophecy — things kept getting worse and worse. It was the most relentless pain you can imagine. All the fluid accumulation was stretching the lining around my heart and lungs, so I felt like I was constantly being stabbed. And no amount of sleep could satisfy the fatigue. A combination of fear and weeks without a diagnosis all combined into what was a nightmare. Unfortunately, what made it more difficult was that it kept coming back a little stronger than it was before. But the fear and the pain that it inflicts in me and other patients has served as the ultimate motivator to fight back and to try to advance research.

Throughout the first half of the book, you reference that you expected someone, somewhere to be working on a cure for CD. Why wasn’t that happening?

Well, a few labs were working on it, but it was uncoordinated research, and they had very little progress to be shown for it. What I’ve also learned is that’s more the rule than the exception in the rare disease space. There’s rarely a unifying force that brings groups together and makes sure they’re aligned and collaborating. Rare disease foundations often don’t feel it’s their place to tell scientists what to do and what not to do. They think it’s their responsibility to fund research, not drive it. But that’s changing. My organizations [the Castleman Disease research program at Penn and the Castleman Disease Collaborative Network] have come up with a system where communities prioritize what research is to be done and identify the best people to do the work. That’s one part of creating the right ecosystem.

I imagine it’s difficult to come to a consensus on what treatment works because there are so few patients to even study, though?

Yes, that’s why collaboration across institutions is so important. If you study breast cancer, then you have thousands of patients at your institution whose samples you can work off of. Because of numbers, you’re don’t have to collaborate. In the rare disease space, if you have 10 patients at every major medical center and every patient seems to be a little different, you can’t find any sort of consistent trends. So you have to work with folks down the street and across the country. Our approach is to work with other institutions but to go directly to patients. We ask for their electronic consent and send kits for them to send samples back to us. That way, we can enroll patients from around the world into University of Pennsylvania studies.

How about the rare disease space as a whole – have you been able to collaborate with folks studying other rare diseases to expedite progress?

Absolutely. We’re all in this fight together. In the past, we’ve been reinventing wheels, but we can all help one another. The Chan Zuckerberg Initiative, founded by Mark Zuckerberg and Priscilla Chan of Facebook, has taken on a leadership role in the rare disease space, and we got a grant from them about six or nine months ago to help spread what we’ve done for Castleman disease — crowdsourcing research ideas, tracking the status of research studies, etc. — to other rare diseases. They’re working with us to make these tools more applicable to cystic fibrosis or ALS or whatever the disease might be. Our goal is to cure Castleman disease, but at the same time, we want to spread what we’ve done to help other rare diseases ‘cuz, boy, do we know how lonely the rare disease space can be and how challenging it can be when you’re fighting alone.

Why is it important to fund research on rare diseases if each one affects so few people?

When you look across all rare diseases, there are about 7,000 that affect 30 million Americans. That’s one in 10 Americans. So each rare disease is rare, but combined, they make up a huge population of the country. And 95 percent of rare diseases do not have a single FDA-approved therapy. That’s crazy. That is a public health problem.

The second thing I would say is because so little research has been done in this area, there’s a lot more low-hanging fruit. Let’s say you need to spend $1 billion to make a very small gain in survival or outcomes for a very common disease because so many billions have already been spent. With a rare disease, you can make a very large gain in patient survival and understanding the disease with a significantly smaller investment. Maybe you need to fund one $10,000 study to make a huge breakthrough. There are opportunities for small dollar amounts to go a long way here.

As a patient, you pushed a lot more than, as a doctor, I’m sure you would have thought was appropriate. What advice would you give to patients in order to find the balance between being their own advocate and respecting medical authority?

It’s a really tough balance. I think I have never figured out exactly what it is. I’ve probably crossed the line both ways. At the end of the day, if you have a rare disease or a loved one with a rare disease, you have to remember you do need to be an advocate for yourself. I’m not advocating for yelling at your doctor and demanding things. And there’s a fine line where you might actually be hurting yourself — let’s say a doctor tells you to take one drug, but you’ve done research online and think something else would be better, that could be harmful. But don’t be afraid to find the right doctor to treat you, ask questions, and really push for answers.

Why did you want to write this book?

I learned so many lessons from each time I was on my deathbed — lessons I wish I’d known before I went through everything, lessons I needed to share with the world. The less obvious one is the realization that I didn’t regret anything I’d done or said. I only regretted things I didn’t do or say. It’s given me a sense of trying to make the most of every second. That’s not a groundbreaking concept. People say, ‘Live like you’re dying.’ For me, it took literally facing that to realize that I need to get doing. If I think it, I need to do it.

That’s the other really big lesson: turning hope into action. If you have a disease where the progress hasn’t been made scientifically, no matter what your background is, opportunities exist where you can be a part of doing something. It might be putting on a bake sale in your neighborhood to raise money or maybe it’s getting more actively involved in research. What I would encourage is to think about what can you do to tangibly get the world a little bit closer to where you want it to be.

David Fajgenbaum will discuss his book with Grit author Angela Duckworth at 6:30 p.m. on September 17th at the Mütter Museum. Tickets are $10 and include a book signing and access to a reception following the lecture.