A year later, Jess Sullivan is teaching at Flywheel Sports, doing health coaching out of the new Wellness Above Walnut collective — and, most important, smiling again. 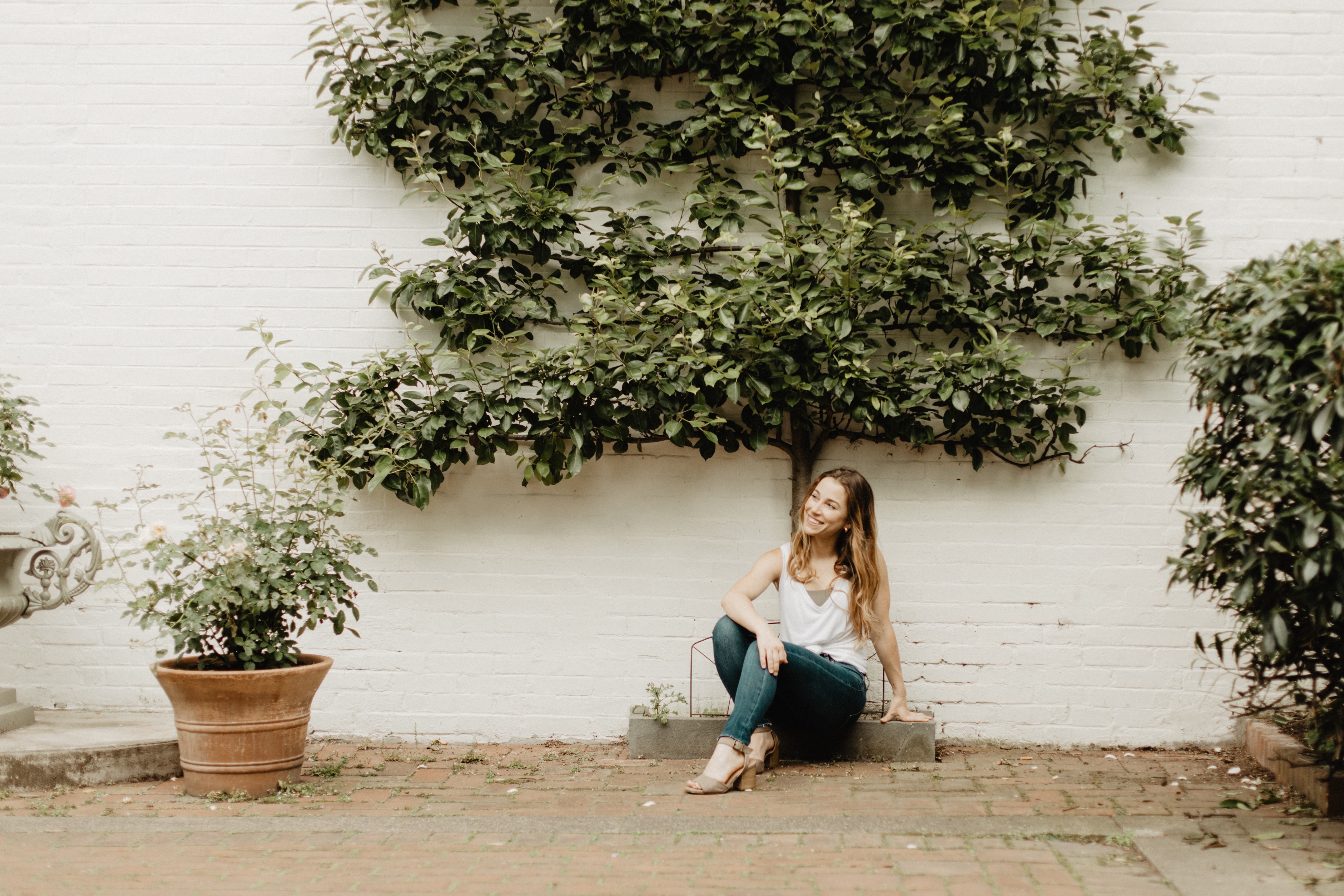 Local spin instructor Jess Sullivan went through a difficult grieving period after her sister died suddenly. Sullivan nearly quit the fitness industry as a result. A year later, though, she’s found a way to smile again. / Photograph by Delaney Newhart

“Last year, my sister passed away suddenly. I have a really cheerful disposition — a ton of energy — and I’ve been that way, I was that way for 30 years. And then all of a sudden, a few months before turning 31, when she died, I felt like…like the wind knocked out of my sails isn’t enough. My floor dropped out. My world shattered.

It was a bizarre point in time for other reasons, too. I’d been a trainer teaching probably between five and eight classes a week in Philadelphia for close to nine years. At the time, I was at Body Cycle Studio. It was so special and such a beautiful place. There was this incredible community of people that lifted each other up and made everybody feel welcome. I’d taken on a lot of responsibility there. But after my sister died, I think I took an entire month off. I couldn’t teach spin to a roomful of people — it was just too hard. Everyone knew what I was going through; it was all over the news.

I’d known the studio was having a hard time, but I didn’t really know how bad the financial situation was. The owner called me and was like, ‘Are you coming back?’ I was like, ‘I don’t know. I might not even be able to live in this city anymore.’ He said, ‘The studio’s going to close if you can’t come back.’

I was already so crushed because of my sister’s death. And then with Body Cycle, I poured myself into that and then it closed. At that point, it seemed like maybe fitness wasn’t for me. I wondered, ‘What am I really bringing to the table? Is this a shadow career? (I was a literature major in college and taught high school for a year before.) Should I be doing something different where I’m not giving so much of myself away?’

I got sucked back into spin mostly because of the riders. I have a little brother as well, and I’m very close to him, but grief is a hard thing. Our family didn’t pull together right away. I was single — I still am — and I didn’t feel like my friends understood what I had lost. So I felt alone, and I was desperately missing the community I had through spin.

Then Flywheel Sports reached out and asked if I’d be interested. I really took a risk teaching there. I didn’t want to tell people what I was doing. I still didn’t know if I could get on a bike and play music and be cheerful and be happy. They ask you to go to New York to train, and I had a miserable time. It was only five days, and it felt like three months. When you’re grieving, things hit you in waves. Someone would play the Drake song “Nice for What.” It’s this great spin song, but in my memory, the last time I felt carefree and happy was when that song was popular. I would hear it and start crying. It’s hard when you can’t share everything with everyone — you don’t have words and you don’t feel like it’s people’s right to know every feeling. You’re trying to guard your own memories.

I still wasn’t sold, but I came back and started teaching anyway. Kind of out of desperation and not knowing what else to do, I kept going through the motions. Fortunately, I really clicked with the Flywheel community. A lot of “body rockers” (what we called our riders at Body Cycle) now come to Flywheel. In that way, I feel like I’m home again.

After an entire year, I basically got back to this place where I’d been a year prior — working two full-time jobs in fitness as an instructor and a personal trainer. When I was 29, I knew that was hard. Now I’m 31, and it’s really hard. You’re on from 6 in the morning until 9 at night every day, and it’s exhausting. And being new at Flywheel, I paid my dues all over again. You’re stuck at the 7:15 a.m. Saturday morning class in Bryn Mawr and the 7:45 p.m. one in Center City. It was defeating at first. I felt I paid my dues for 10 years and was ready to walk in at a different level, but instead I spent a year working even harder than I had for a decade. I’m happy to work hard, but I wanted to work hard with a little more of a vision instead of this daily hustle.

That’s where the health coaching has come in. A few years ago, one of my best friends in the world came to me and said I don’t feel well physically, emotionally. I made her my first coaching client  and privately trained her three times a week for about a year. I built up her strength, so she could take spin classes. I became her nutritionist. We were trying to change habits very slowly. I wanted this to last and stick, because I loved her so deeply and knew her so well. It was a tremendous success. Over two years later, my friend feels better than she ever has. None of her circumstances changed — she still works incredibly hard and deals with heavy stuff — but she can handle it. That was more satisfying than working with any other client.

So I started asking personal training clients, ‘Can we track food for one month? I want to ask you a series of questions about how you feel, how you think.’ We weren’t just doing squats and push-ups anymore. All of them let me use them as guinea pigs.

It’s funny because I hired a life coach six or seven years ago. I met him at a bar in New York City and started talking about my pet rabbit. He was like, ‘I think I could help you a lot. Here’s my phone number.’ He charged me something I could not afford at the time. I think he runs a pizza shop now. But I did it, and he said, ‘I think you’re a life coach.’ I was like, ‘I’m not, I’m a trainer.’ But all these years later, I’m kind of a life coach.

I’ve learned that what people need to be successful is accountability. It takes a month of constant check-in to start to change you how you feel about your mind, your body, and your fuel. I ask a lot of questions about how my clients sleep, how they feel, what’s their energy like, do they have pain in their body. I get to know them and make sure changes are realistic. If something doesn’t work for them, we figure out how to change it.

A few months ago, I was texting with Christie D’Arcy [the owner of City Hydration and the co-founder of the new Wellness Above Walnut collective], who I met at Be Well Philly Bootcamp last year. She said she and her sister, Casey [who runs Luminous Chiropractic as well as Wellness Above Walnut] were moving to a bigger space. She was like, ‘You’re doing more health coaching than anything else. What do you think about shifting your career and moving to this office space with us?’ Now we’re starting something bigger together.

I am smiling very genuinely now. I cry a lot, too, a lot more than I ever did before. But I understand my clients so much more, too. People who struggle with health and wellness are often harboring huge pain, and they’re masking it by either punishing their bodies — with food, with workouts, with lack of food or lack of movement, and now that I have been through something tremendously difficult, I understand them so much better. I understand when someone’s so far down that they’re not going to make it back.

I’ve become very careful about not falling into the trap of overfunctioning. I work really, really hard, but I’ve become really good at being able to tell my friends no when I’m tired and spending time on my own. I adopted a dog from Street Tails Animal Rescue who I named Jane Fonda. I bring her to Flywheel a lot. I have a pet rabbit named Kevin as well. If I’m feeling rundown, I will text my clients on a Saturday or Sunday morning and say I need to sleep in today. But it’s not to sleep in — it’s because I love my mornings with Jane Fonda and Kevin. She’s this blind dog; Kevin hops around and head butts her, and she doesn’t mind. I just sit there with a cup of coffee and watch them and I’m so happy. It’s that whole you can’t pour from an empty glass kind of thing. They fill up my soul.

I’ve been criticized many times in my life for walking around smiling. I think people have a hard time believing it’s genuine. I guess even I never knew if it was. When life’s not difficult, it’s very easy to smile. When you’re grieving someone close to you, especially someone’s who’s ripped away from you suddenly, it’s easy to stop seeing the good in people and in life. Somehow I still wake up every day looking forward to helping people and creating joy in their lives. So I think I’m most proud that I was able to rediscover that joy after being sadder than I could even describe.

Because I want to spread joy. I want to be the brightest part of someone’s day. Without preaching at people, I want them to know that I see them and to feel uplifted. I don’t care very much if my clients’ triceps are visible. I don’t have many clients that say, ‘I just want to look a little tighter in a bikini.’ I could do that, but that’s not what I’m passionate about. I’m much better with clients who say, ‘I’ve tried everything for 20 years, and I finally feel strong. I walk up the stairs and nothing hurts.’ Or a mom who says she’s setting a good example for my daughters because I’m not punishing myself with food. I’ve seen my influence and support change people’s lives. It’s cool and humbling.”