This PA Native Was Addicted to Heroin and Pills. Now He’s Running His Own Yoga Studio. 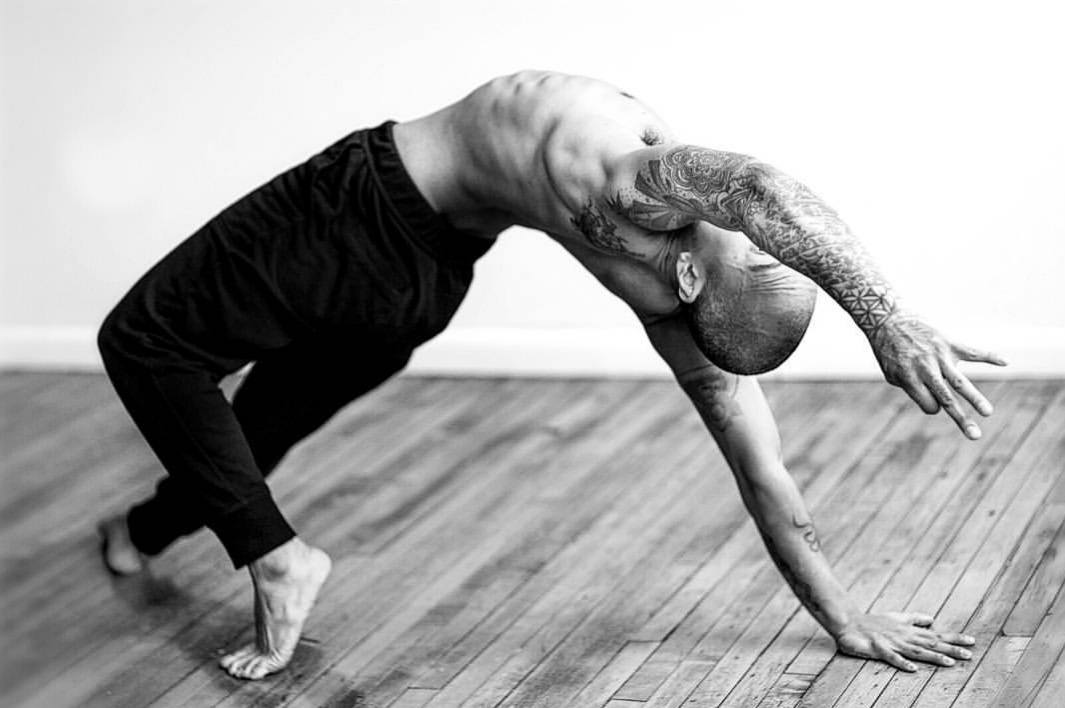 Who I am: David Hem (@thehealingfieldsphilly), 37

What I do: I run the Healing Fields Philly, a new yoga studio in Northern Liberties.

I was born in America, but I’m Cambodian. My parents escaped a prison camp and got away. Then a woman by the name of Mildred Baderschneider sponsored our parents through this beautiful church group that had a connection to Cambodia. She paid for them to get to Lehighton in the Poconosish area. Mildred charged us, I think, $20 a month for rent. I called her my grandma. She named me and my brother John and David — she was into the Bible a lot — and raised us to speak English. That’s why my Cambodian is not where I’d like it to be.

My parents wanted us to learn the American way, too, to get here and do things, be successful and stuff like that. My dad worked for the railroad putting down tracks and then became a dishwasher. We moved to Philly at that time.

In high school, there was this U.S. Army program that allowed you to go to bootcamp your junior year and then Advanced Individual Training your senior year. I thought that would have been the best move for me. I went 11 Bravo [shorthand for infantry] and ended up getting shipped off to Fort Benning, Georgia. I went back home for senior year of high school, and my mom ended up dying. It threw me off the edge at 17 years old. I dropped out and was making a lot of alcohol-infused decisions. 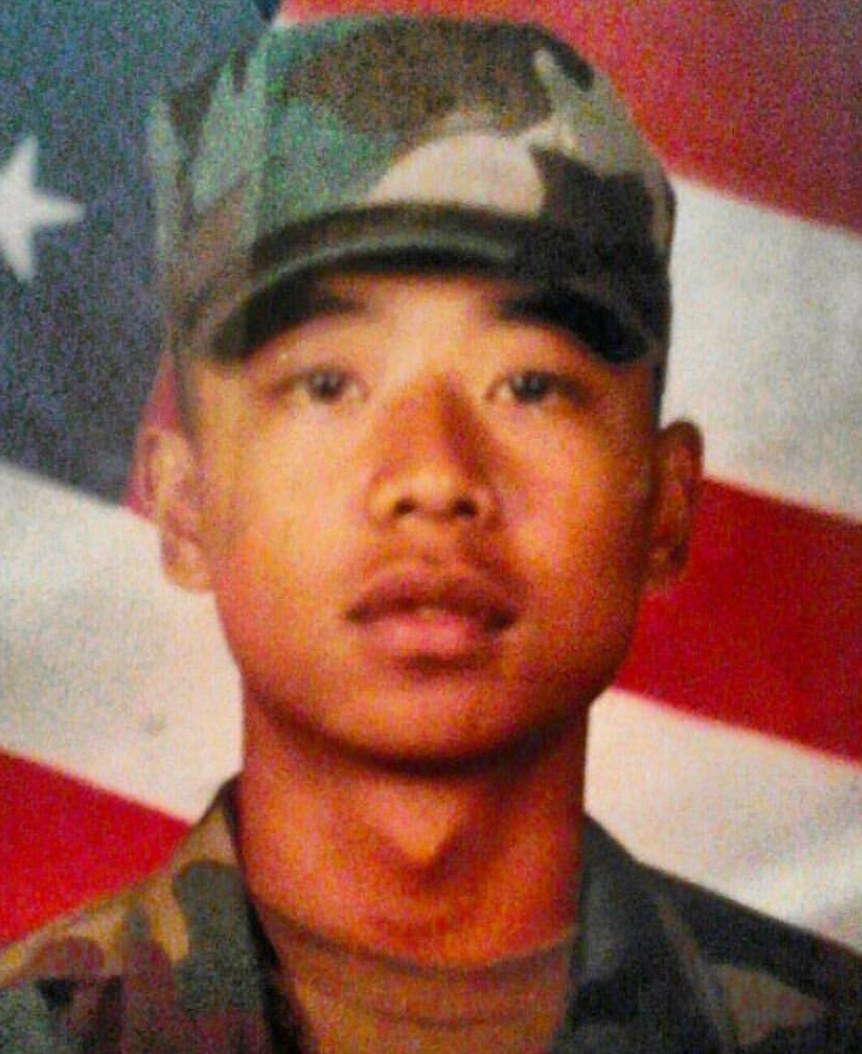 Hem was in a U.S. Army training program in high school and was planning to enter the military until his mother passed away. / Photograph courtesy of David Hem

The first time I tried hard drugs was at a greenhouse where I was working in Lancaster, Pennsylvania, and this guy gave me the tiniest line of heroin. I was just smoking weed at the time and drinking. I remember puking out the car and all over the door — but also this euphoric feeling.

Pills were introduced to me at a factory job I worked in Northeast Philly with my dad. It wasn’t the cleanest place to be. You’d smoke cigarettes and throw them on the ground. I hated it so much and wanted to do anything to escape. People were offering [the pills] so I tried them. I became all about Xanax, Percocet, weed, alcohol, and parties.

Then I revisited the heroin after the Percocets and OxyContin got too expensive. Instead of spending $80 on 80 [mg], you just buy a $10 bag of heroin. Once the withdrawal started to kick in, it was so unbearable, you’d do anything not to feel it.

That went on for 15 years. At one point, I was working only to pay people back for drugs. I lost friends. I used to be into fashion and sneakers and hats and coordination, and I ended up with three pairs of cargo pants on and big-ass red hoodie that didn’t fit me. People didn’t want to fuck with me anymore. They were like, ‘Damn, Dave, you messed up.’ Some people tried to help, but I wasn’t willing to let them. I pushed them away.

I ended up stealing all this money from my dad. He was the only one who would give me money. When I was living on the streets, he would still give me money through the mail slot some nights when I would come by.

[The turning point] was November 30th. I forget what the year was. I was seeing a girl at the time who happened to be a call girl. I met her at the methadone clinic. She would always get mad at me for not contributing to the ‘get highs.’ I was living on the streets in a place of desperation, and not much intellect comes out of that place, especially if you have no other level of consciousness. I didn’t have any money, and it was cold. I was withdrawn and in the shit. I decided I was either going to rob a Rite Aid or a corner store near my neighborhood. I was like, ‘Either you get money for drugs and not feel withdrawn anymore or you go to jail and you have a place to stay.’

I went with the corner store. I found a stick on the ground, ran inside, and was like, ‘Give me your money.’ My mask actually fell off. There was a kid crying, and his grandma threw $$5 bills at me — but also threw a cookie tray at the back of my head. It hit me, and I fell down the stairs.

I ended up going to Curran-Fromhold Correctional Facility. That was way back in 2007, 2008, for about 14 months. Going to jail saved my life. Coming out, I was in a methadone clinic and got clean successfully. I ended up in a recovery community and spent four years there.

Through that, I went to this event at the Philadelphia Museum of Art on a Wednesday when yoga was being taught. It was pay as you wish. Once I went, I knew I’d come back the next week. I’d always wanted to do yoga, but my friends made fun of me. That, I think, has been the cause of all the drug use. I was trying to fit in with certain friends, and I couldn’t express who I truly was.

I became a volunteer at Dhyana Yoga. I ended up getting hired and became a manager. I got a scholarship for teacher training. I ended up teaching full-time, 15 to 20 classes a week [at various studios, including Dhyana, Tuck Barre & Yoga, the Yoga Garden, the Sporting Club at the Bellevue, and Sweat Fitness.] That’s all I’ve been doing for four years now. 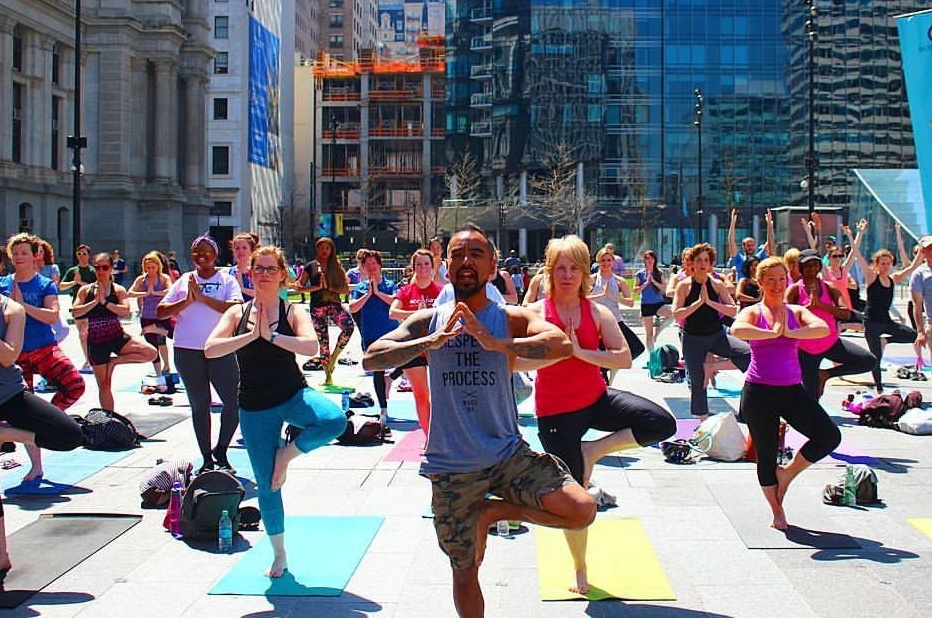 Then Dhyana wanted to get rid of [its Northern Liberties space.] I got an offer asking if I wanted to run the studio. I shouldn’t even be in the conversation to manage a property. My credit is shot. My friends told me to do a GoFundMe to even get the first month’s security deposit. But so many things started to open up and make sense. The dots were connecting. Everywhere I look, there’s so many beautiful people in my life looking to help and wanting to help, which is a cool 180 in comparison to a long time ago.

I think what yoga did is show me other options. I had more choices, you know? You ever heard of an experiment called Rat Park? They did a study about addiction. The rats would do cocaine because that’s all that was offered. They’d do until they died. But then this guy made a park with wheels and mazes for them. [Scientists] found out because the rats had more things to do and meaningfulness, they saw it as a better option than dying of cocaine. Yoga gave me a platform to practice being myself, and expression is the key to any type of liberation. It opened my eyes to how much we need service and community. It showed me more truths about myself and how most of this stuff that I trip about is trivial. It makes me feel alive, And, I mean, it’s fun. I kind of get paid to heal and get better, which is a nice lifestyle. 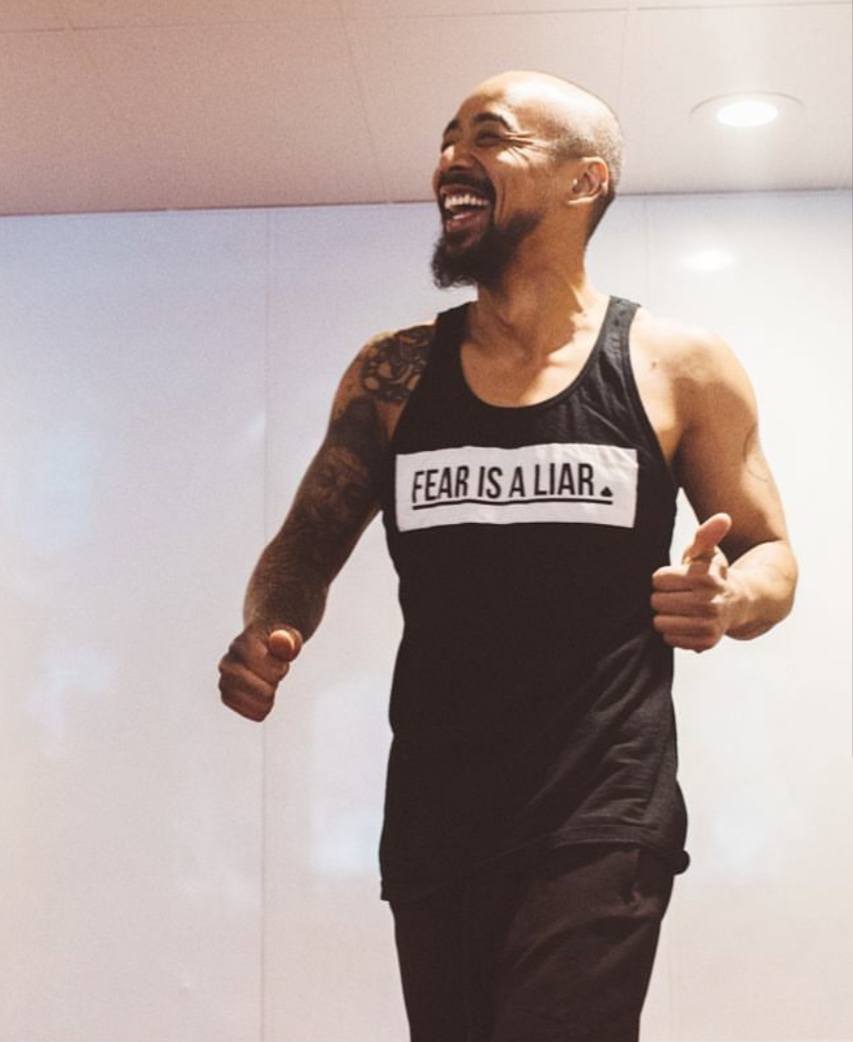 Hem’s found a way to express himself through yoga. / Photograph courtesy of David Hem

I’m into the idea of dynamism, a way of thinking where you incorporate various ideas of philosophy and therapeutic practices to help reach a wider base. That applies to yoga because I think one form is not for everyone; Vinyasa yoga’s not going to help everyone. I was trained in Vinyasa, but I’m a hip-hop dancer, too, so I’m hoping to introduce dance classes here as well as other modalities of healing, too — not just yoga and well-being. I’m thinking fitness but also philosophy classes. I’d like to make it into a school as well and call it the “Schudio.” 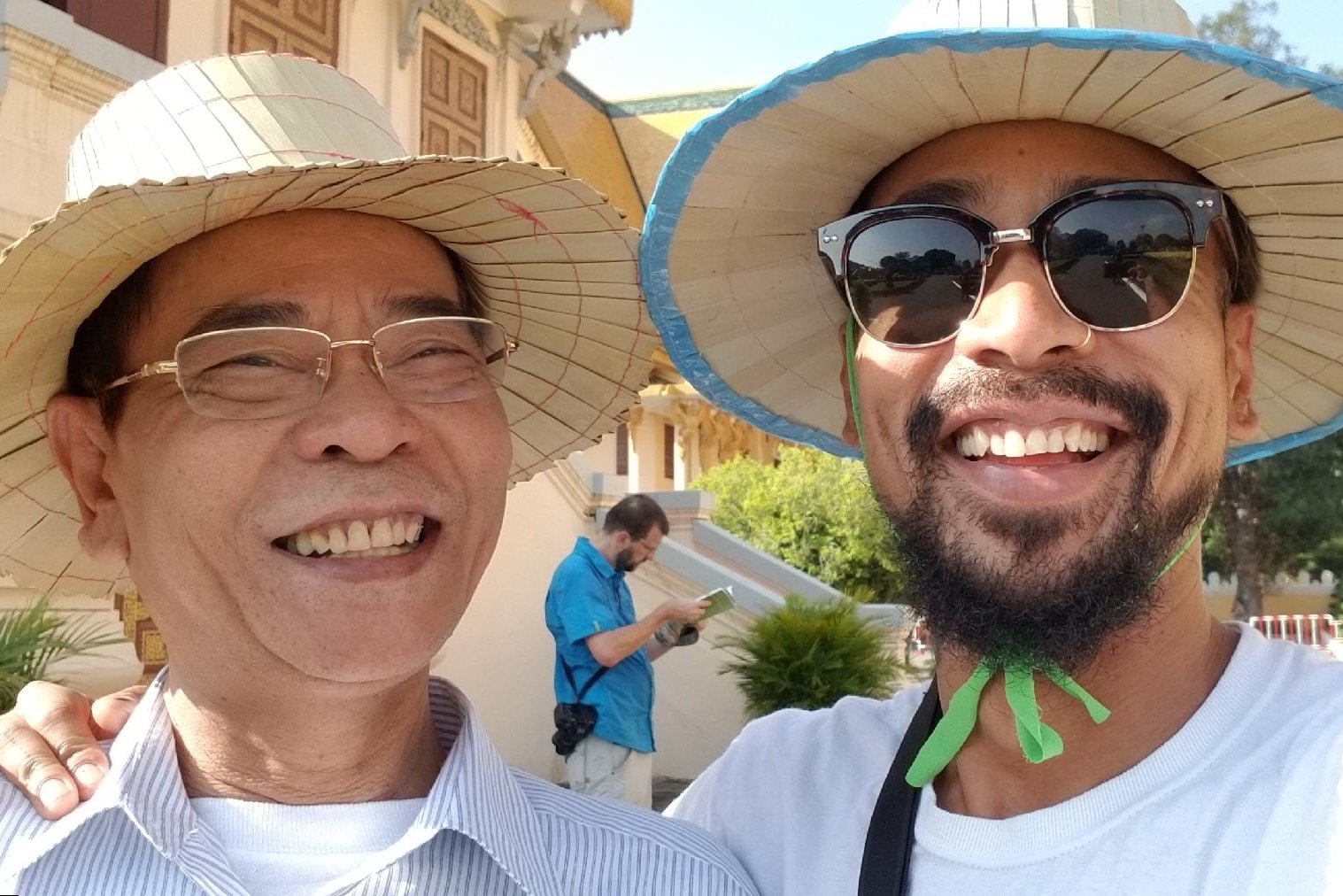 Hem and his father traveled to Cambodia together last year. / Photograph courtesy of David Hem

Right now, the yoga studio [which has been open since May 1st] is called the Healing Fields Philly because the Killing Fields were a thing in Cambodia back in the ’70s. I hope to eventually bring this over to Cambodia, too. I went there in December for the first time. It was my first time out of the country. It changed my life. A lot of the burdens that I used to have about my culture lifted instantaneously. My dad and I both went and healed ourselves and our relationship. Multiple fields of healing are warranted, I think. Especially in this day and age.

The Healing Fields Philly is open at 1030 North 2nd Street. All classes are $10 for a drop-in, and new students can get a first-month pass for $50.