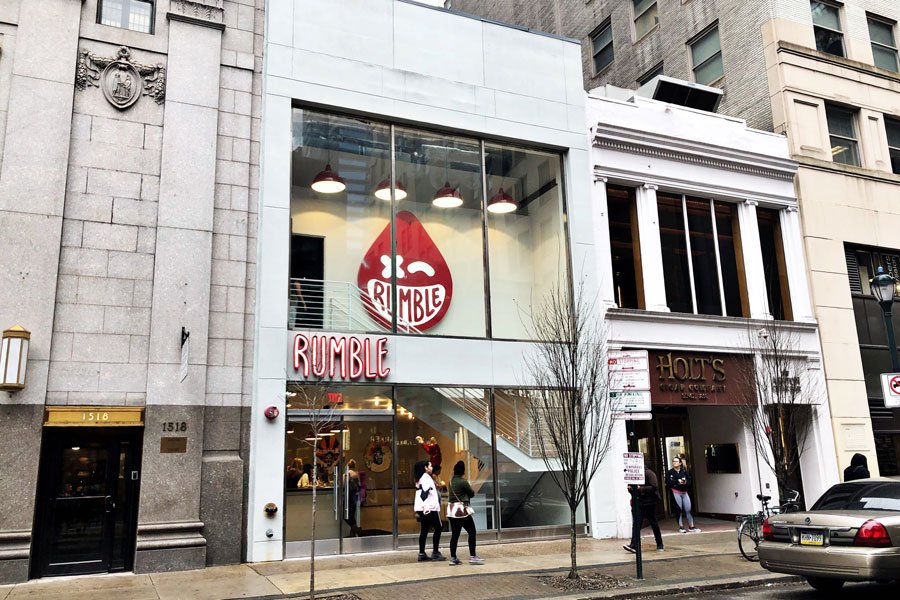 For a region that’s already packed with upscale fitness facilities and healthy eateries, it’s amazing how much attention and activity new gyms get.

But if the excitement around Rumble Boxing, which officially opened its doors on April 5th, seems a little bigger than usual, it’s for good reason. For one thing, we’ve been anticipating this gym’s opening for a while. Be Well Philly first reported that Rumble would be bringing its boutique boxing studio here in February 2018. Now, more than a year later, we’re finally able to check it out.

For another thing, the Rumble folks have made a smart move in adding some Philly talent to their team, hiring trainers that locals already know and love, like Carly Rubenstein, Shannon Brennan, and Leroy Mapp.

And then, of course, there’s the reputation of Rumble Boxing itself. It’s known for attracting celebrities (Kendall Jenner, Hailey Bieber, David Beckham, and — based on Rumble’s Instagram — an absurd number of models) in New York and Los Angeles. Now, we’re getting a taste of that celebrity-endorsed life with our own Rumble Boxing studio on Walnut Street.

We swung by for a class on opening day to see if it would live up to the hype, and it didn’t disappoint. For one thing, it’s a gorgeous studio. The front of the building is made up of two giant walls of glass, which flood the lobby and staircase to the second-story studio with light. The locker rooms — slick, pristine white spaces with all the amenities you’ll need to freshen up after class, including Cowshed soaps — smell like a spa. The studio itself is outfitted with intense sound systems, screens, and lighting (we’re talking black lights, which add some serious dramatic effects) that make the workout experience fully immersive.

We were promised a high-end boutique studio, and that’s exactly what we got. 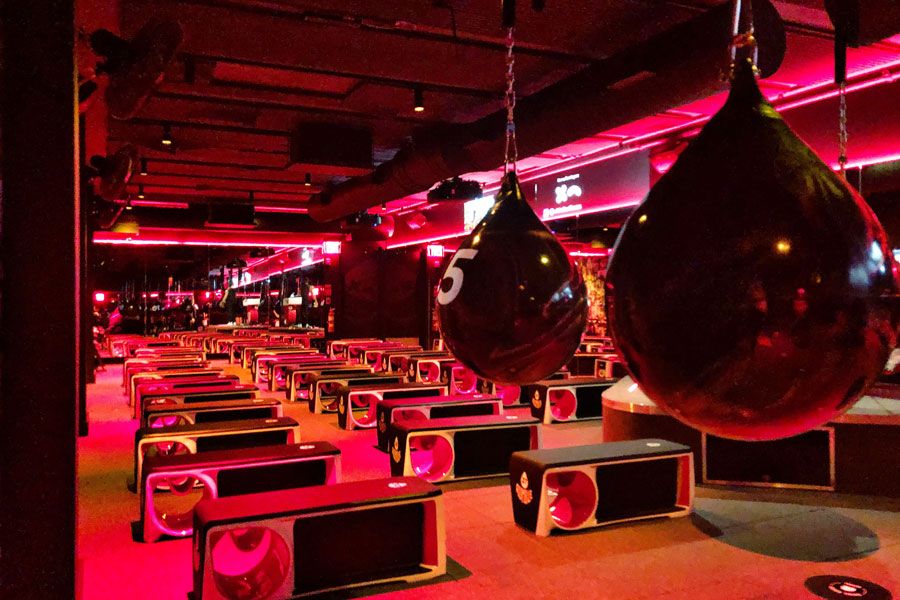 Some of the dramatic lighting on display at Rumble Boxing. Photograph by Caroline Cunningham. 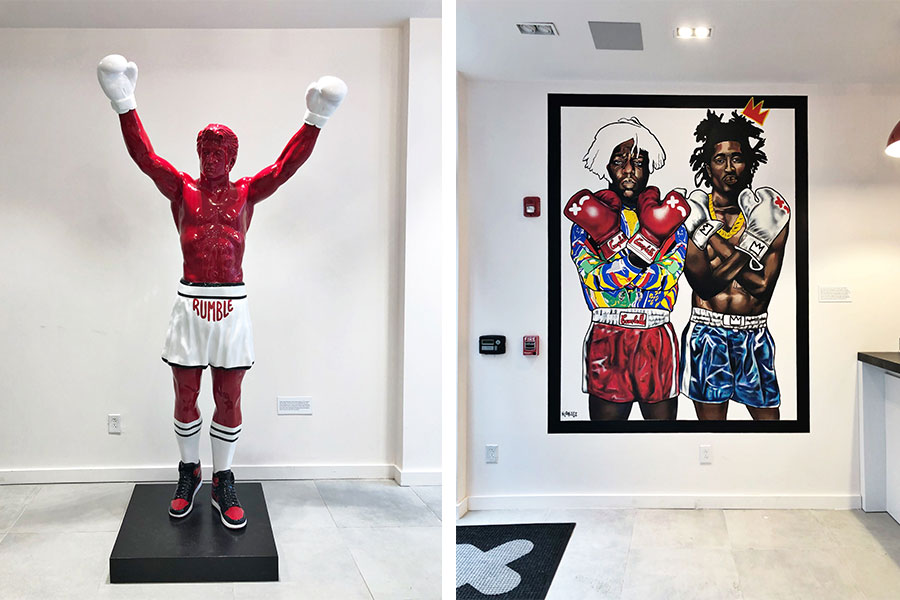 Artwork fills the lobby of the new studio — including a Rocky-inspired statue and a painting that’s Basquiat and Warhol meets Biggie and Tupac. Photograph by Caroline Cunningham

As for the workout itself, it’s honestly the most beginner-friendly of all the new boxing workouts that have come to Philly recently. Like EverybodyFights, Rumble uses a numerical system — punches are numbered, and the combinations are listed on a bright screen at the front of the room, easily visible from any bag. But while EverybodyFights teaches its boxers 10 hits, Rumble limits it to six punches, a simplification that makes a difference when you’re learning an all-new workout.

The class is structured like a boxing match, with 10 three-minute rounds. Half the studio is filled with hanging aqua bags, Rumble’s teardrop-shaped, water-filled punching bags that take the place of traditional heavy bags. The other half holds weight benches, each equipped with dumbbells and other strength equipment. During the 45-minute class, you’ll spend half the time in each section, flipping back and forth a couple of times before the workout is through. 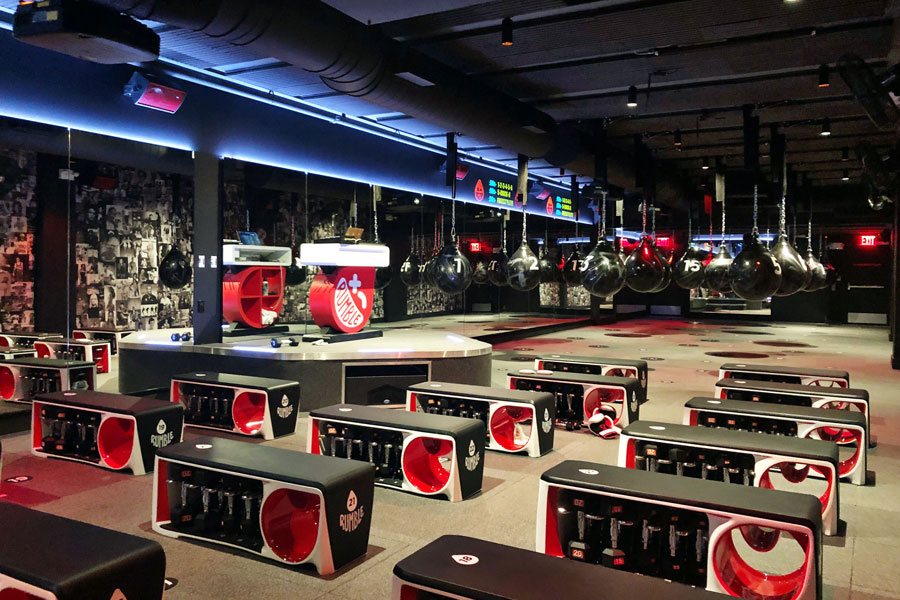 The strength training side of the studio, equipped with weight benches. Photograph by Caroline Cunningham. 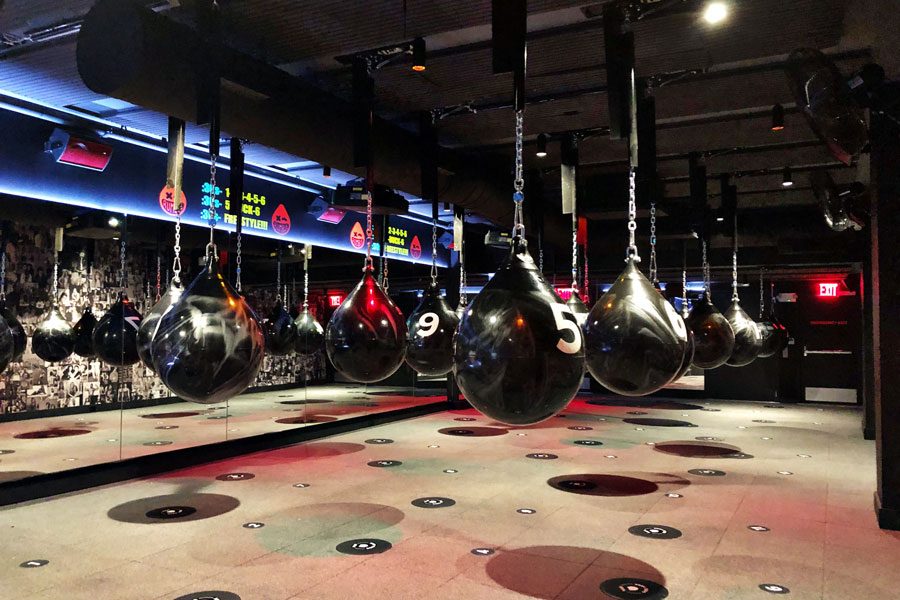 The screen near the ceiling on the boxing side of the room displays the hit combinations throughout class. Photograph by Caroline Cunningham.

Three rounds of boxing are followed by three rounds of strength, and the class ends with two more rounds of each. Because you’re never stuck on one type of workout for more than three rounds (about nine minutes total), the class flies by. It’s also easier to push yourself hard: Just as your arms are about to give out from squat-pressing dumbbells over your head, you’re back to the boxing bags. Plus, in under an hour you’ll get in a kick-butt cardio sesh and some weight training — a pretty good deal, if you ask us.

Overall, the class is a high-energy, upbeat-music-fueled, sweaty good time. (Oh, and you will be sore. Three days later, and our abs are still feeling it.) At $34 for a drop-in, it’s definitely on the higher end of the range for a Philly workout class, but hey, it’s boutique fitness — we never said it would be cheap. Ready to check it out for yourself? You can sign up here.