The memoir from Exton athlete Kyle Bryant, about his cross-country ride to raise awareness for his own rare disease, comes out on February 26th. 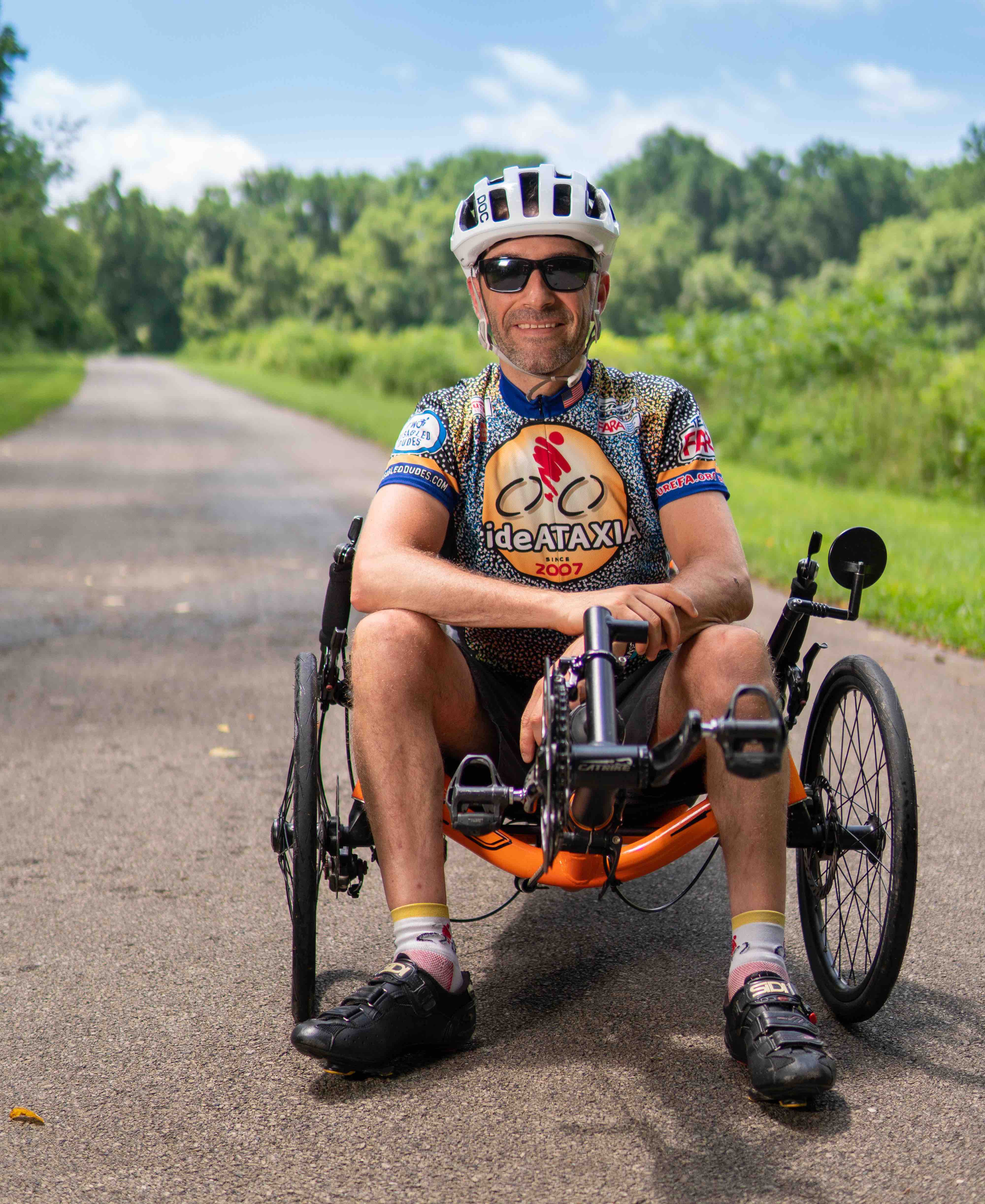 Kyle Bryant, now an Exton-based cyclist, rode across the country on a recumbent trike to raise awareness for his rare disease, Friedreich’s ataxia. / Photograph by Bryan Kirkwood

In high school, Kyle Bryant was an avid snowboarder, a volleyball player, the prom king, for God’s sake. Yes, he was clumsy, known for getting into scrapes that led to stitches and, once, a broken wrist, but what athlete doesn’t have injury stories? Aside from the occasional mishap, Bryant was living the Northern California dream.

Until he wasn’t. At 17, Bryant was diagnosed with Friedreich’s ataxia (FA), a rare disease that gradually damages muscle coordination. Those accidents weren’t something he would grow out of once his gangly teenage years were over. In fact, the doctors told him, they’d get worse.

Yet Bryant didn’t sit around moping (at least, not for too long). While struggling to accept his terminal illness, he came across a story about a man with multiple sclerosis who was going to ride a recumbent trike across the country. Idea planted, Bryant bought his own trike and convinced his parents to come with him on a 2,500-mile ride from La Jolla, California, to Memphis, Tennessee, where the next membership meeting of the National Ataxia Foundation would be held.

That was 22 years ago. Bryant, now 37 and living in Exton, has since founded RideAtaxia, a  network of bike rides in six states that raises money for FA research. (Mark your calendar for the Philly-area ride on October 13th in Blue Bell.) So far, the organization has raised more than $7 million. Bryant also co-hosts a podcast called Two Disabled Dudes and has written a book about that first cross-country bike ride, titled Shifting Into High Gear: One Man’s Grave Diagnosis and the Epic Bike Ride That Taught Him What Matters. Before the memoir comes out on February 26th (you can pre-order it here), we chatted with Bryant about his writing process, the future of FA, and, of course, his favorite places to ride in Philly.

BWP: Can you explain what Friedreich’s ataxia is?

Bryant: It’s a rare disease that affects all muscle coordination from the toes to the fingertips. It also has symptoms like vision loss, hearing loss, and life-shortening heart palpitations. The fact is that when you see me, you’re not seeing the total devastation. I was diagnosed when I was 17 years old. A lot of kids, unfortunately, are diagnosed when they’re five years old. Those kids are in wheelchairs by the time they’re 12. It just goes downhill from there. I’m really lucky to have the ability that I have, and I want to use that to benefit the community.

And what made you want to write a book?

I had been thinking about it for a long time. During this ride in 2007, the ride the book is about, I wrote a blog during my journey, about every three days. I didn’t anticipate the incredible response I was going to get. Realizing how much I was impacting other people really made me want to do the book. In general, I don’t want to leave anything on the table in life. I think a lot of us have that drive. We want to make an impact on the world, right? I thought I could help my story and that story specifically live longer if I could write it down. Not only for me personally, but for the entire FA and rare disease community, the stories just aren’t as ample, so each one is so valuable.

Did looking back on those blog posts and writing the book trigger any unexpected responses for you?

It really did allow me to analyze my actions and my thoughts and help me understand why I felt certain ways or did certain things. One of the things that was hard for me to revisit was an interaction with a boy named Brandon at the Arizona State University research facility. He had just had spinal fusion surgery. To connect with somebody like that where yeah, we have the same disease, but we’re in totally different situations — that was a hard one because you try to relate those things to a lesson, and sometimes there just isn’t one.

Pivoting to a happier memory — what was your favorite moment from that ride?

It’s in the book — the moment when my dad said, ‘Kyle, thank you for inviting me on your ride.’ I get emotional just thinking about it right now. It meant a whole lot to me, and it was totally out of character for him. At first, he was like, ‘I’ll just ride the first couple weeks, and then I’ll be done.’ Once we got into it, he started loving it. To me, that meant the world.

How has your diagnosis affected your family dynamics?

I’ve either seen rare diseases tear families apart or bring them closer together. I’m grateful it brings my family closer together. We’re doing something about it. If we were to let FA intimidate us and take over our lives, I think that it would be a much different story. But because we’re putting ourselves in the driver’s seat and saying, ‘This is another thing we have to deal with. Let’s take it head-on, and let’s take it on together,’ that’s the most important thing.

And you’ve been successful at it! For instance, RideAtaxia exists now. Can you tell us about it?

I’m on staff at the Friedreich’s Ataxia Research Alliance, and RideAtaxia is a nationwide program of bike rides that’s fund-written by them. Last year, we had about 2,300 participants, and we raised more than $1 million combined in the six locations. I’m just excited to continue our run of raising money, making progress for research, and having a lot of fun while we’re doing it. I think it’s also an opportunity, especially for FA families to be proud of what they can do rather than ashamed of their disability. I think back to sitting around the kitchen table, having just been diagnosed with FA, and the four of us are staring at each other, going, ‘What the heck are we going to do with this thing?’ and feeling so alone. You contrast that with a RideAtaxia event with 600 people and all kinds of excitement about what we’re doing and how we’re going to cure this disease together. That’s an amazing contrast and something I think about all the time.

Where are we at in terms of developing a cure?

There’s progress daily. We don’t have a terminal cure right now, but we have lots of different approaches to treating the disease. I believe our pipeline includes about nine approaches to treating FA. We work with quite a few pharma partners that are developing treatments, and our worldwide clinical research center, the CHOP/UPenn Friedreich’s Ataxia Center of Excellence, is actually at Children’s Hospital of Philadelphia. It’s something we’re really proud of because it brings together the clinic and the laboratories and nutrition work all in one. They meet once a month and develop approaches together. It’s really an incredible place.

Where are you at in terms of FA? How has your disease progressed since 2007?

During the ride, I was still walking, and now I use a wheelchair probably 98 percent of the time, maybe 99. I only ever stand to transfer or wash dishes or brush my teeth or whatever. The wheelchair thing is a big change. I still drive a car, but I drive with hand controls. My speech has deteriorated quite a bit. So there’s a lot of things that are different. But the point is, none of those things are keeping me from what I’d like to get done in life. I might do it a little differently, but I’m going to get it done. I know it’s called a disability, but I don’t see it as that. It’s another obstacle in life, just like everything else, to work with and bring along for the journey.

And you’re still riding! Where do you like to ride in the Philly area?

I ride a lot on the Chester Valley Trail and the Schuykill River Trail. I also love riding in Valley Forge National Historical Park, which is kind of the connector between those two trails. Last year, I did 1,500 miles, so my goal is similar this year. I’d love to get to 2,000, but we’ll see how it goes — I travel a whole lot, partly to RideAtaxia events and partly to lots of different grassroots fundraisers that families put on all over the country. It’s really incredible because a big part of my job is to go say thank you for your work and for raising funds.