13 Places to Get Kombucha on Tap Around Philadelphia

Fill up a growler at one of these Philly eateries and shops with kombucha on tap. 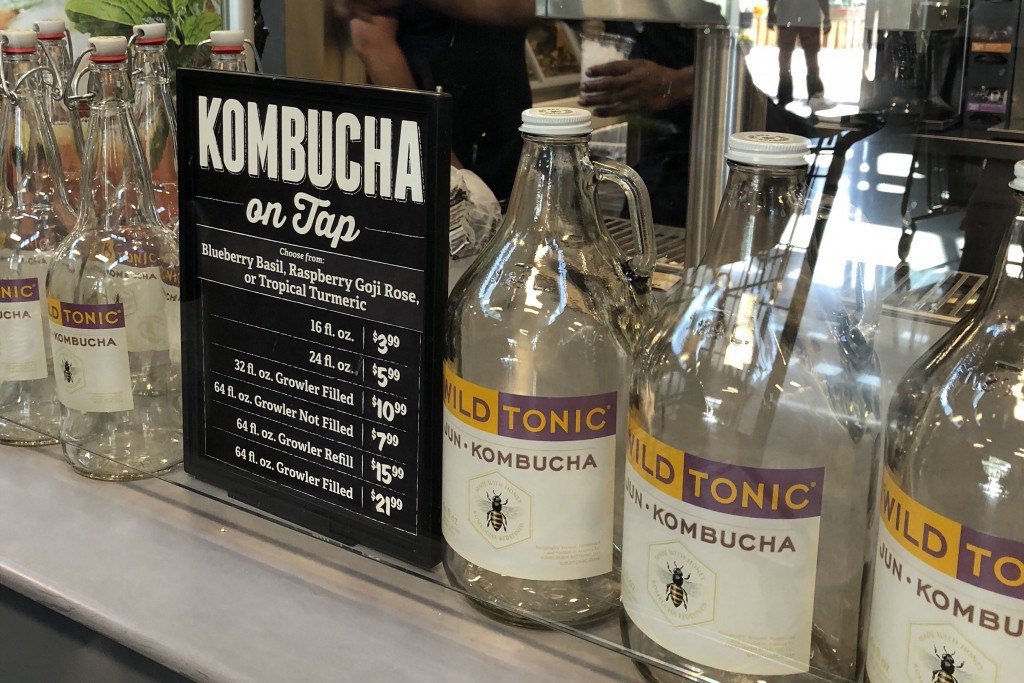 Get kombucha on tap at Sprouts Farmers Market. Photograph by Caroline Cunningham.

Kombucha is a delicious, bubbly, fermented beverage that’s best known for being filled with probiotics. It also happens to be a great alternative to drinking beer — you still get a good flavor, with some carbonation, but without the alcohol.

You can find it in bottles in most grocery stores, and it’s growing more popular on draft. Wondering where to find it on tap? We’ve got you covered. Below, here’s where you can get a glass or fill up a growler with kombucha on tap around Philly, including many places with local brews. Happy guzzling!

Kombucha on Tap Around Philly

This Fishtown spot has rotating flavors of Funky Fresh on draft for $7 per glass. You can also use kombucha as a cocktail mixer here, so we say pair a kombucha cocktail with their spinach and edamame burger for a meal that manages to feel healthy and indulgent all at the same time.

1730 Chestnut Street, Rittenhouse.
Di Bruno Bros. is on the draft kombucha train with Baba’s Bucha, from West Chester-based Baba’s Brew, on draft at their Rittenhouse location. They have two seasonal rotating flavors at a time on draft, and it’ll cost you $5.99 for a 16 ounces, $10.99 to fill a 32-ounce growler, or $19.99 to fill a 64-ounce growler (plus $5 for the growler, if you don’t have one). We promise not to judge if you pair your growler of kombucha with a full basket of artisanal cheese (yum).

7136 Germantown Avenue, Mount Airy.
This Mount Airy brewery brews their own kombucha with an organic green tea base. Every now and then, a new flavor, like sour cherry, will be introduced. Over the summer, they offered RumBucha, a Collins-style cocktail with kombucha and rum.

1253 North Front Street, Fishtown.
You’ll find a rotating flavor of Baba’s Bucha on draft for $6 a glass at this Fishtown cafe. And because I know you’re wondering, yes, you can use it as your cocktail mixer, for an additional charge.

29 Haddon Avenue, Westmont.
You’ll find two rotating flavors of Inspired Brews kombucha on draft at this New Jersey cafe. It’ll cost you $7 for 16 ounces or $25 to fill a 64-ounce growler (plus $6 for the growler, if you don’t bring your own).

263 North 3rd Street, Old City.
At this fermentary — where the magic happens, if you will — you’ll find two to three of Inspired Brews’s seasonal concoctions (think: pumpkin pie and Philly gingerbread) on draft. It’ll run you anywhere from $6.50 (16 ounces) to $45 (a gallon) to fill up a growler. They also offer a growler subscription growler program.

111 South Independence Mall East, Old City.
The Bourse Food Hall is being reimagined, and it includes draft kombucha. If you don’t want one of Kari’s teas, you can try a local, all-natural kombucha from Chester County for $4.95 for 20 ounces.

2113 East York Street, Kensington.
This Kensington bar usually has two brands on tap — Funky Fresh Ferments and Baba’s Bucha — at $4 for a glass. They offer growlers, but they don’t have a set price. Plus, Martha makes local spirit cocktails with the kombucha.

34 South 11th Street, Center City.
At this grocery store, they serve Vermont-based Aqua Vida kombucha on tap. The flavors will rotate on seasonality and availability, and the price won’t break the bank. It’s $2.45 for 12 ounces and $2.95 for 16 ounces. For growlers, 32 ounces will cost $5.45 and 64 ounces will cost $10.88. Aqua Vita is also available on draft at MOM’s location on Lancaster Avenue in Bryn Mawr.

559 Carpenter Lane, Mount Airy; 217 East Butler Avenue, Ambler.
At Weavers Way’s they’ve got a rotating selection of Inspired Brews, Portch Tea, and Baba’s Brew kombucha on tap. If you bring your own growler, it’ll cost you $3.95 per pound (yes, per pound, not ounce), with the weight of the growler deducted. Plus, they recently began carrying a cannabidiol-infused kombucha called Cannabliss in bottles.

1000 S. Broad Street, Graduate Hospital.
In addition to its organic foods and Wednesday deals, Sprouts has kombucha on tap. Head to the coffee bar for Wild Tonic’s blueberry basil, raspberry goji rose and tropical turmeric varieties. It’s $3.99 for 16 ounces, $5.99 for 24 ounces and $10.99 to get a 32-ounce growler filled. If you don’t have a growler, you can get an empty 64-ounce one for $7.99. The larger growler refills are $15.99.

3705 W. School House Lane, East Falls.
If you didn’t have enough choices between the IPAs and pale ales, don’t worry. There’s also draft kombucha on tap. With rotating flavors like elderflower lemonade, blueberry mojito and peach ginger available for $6, there’s plenty of ‘buch at this brewery.