Halloween Potion-Making at the Cauldron Blends Mixology and Magic

Whether you’re there for cocktails or with your little witches and wizards, potions class is in session. 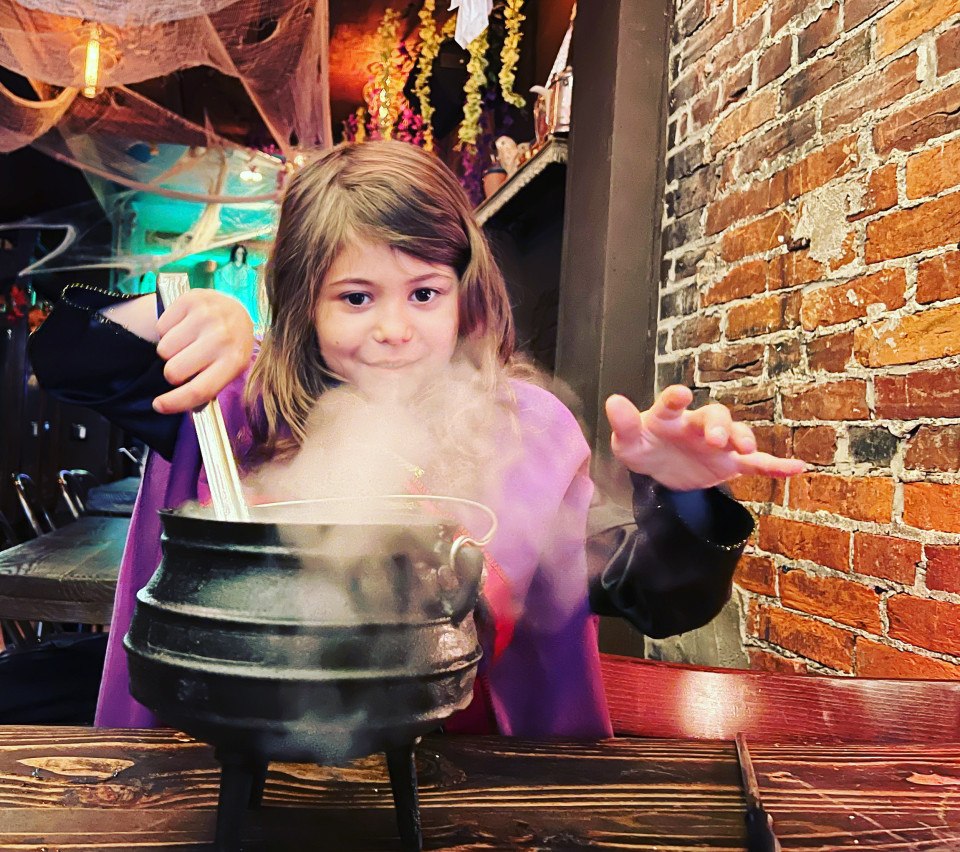 Halloween potion making at The Cauldron, Midtown Village’s magical bar, is available for adults as well as kids. / Photographs by Laura Swartz

We’re deep into spooky season, and maybe you think you’ve already done all there is to do. Halloween-themed bars? Check. Haunted houses? Done. Pumpkin patches? The Great Pumpkin himself would be proud. So for a truly unique experience, we headed to Philly’s magical bar The Cauldron for some Halloween potion-making.

The experience lasts just under two hours and can be tailored to adults as well as children. (For a “junior witch,” as they called my eight-year-old daughter, non-alcoholic ingredients were provided.) So take note, parents who have been looking for something truly special to do for Halloween (and an excuse to enjoy cocktails with your kids), as well as adults looking for an Instaworthy ghouls’ night out.

Walk into the dark Midtown Village bar, check in, and “the bravest among you” gets to choose a magic wand for use in your potion-making session. And yes, the magic wands work! How? Don’t question it! There’s probably a scientific explanation, but as you don your wizard cloaks, you won’t care. You’re all in, and so is the staff (also cloaked) who will guide you through your day as “potion masters.” 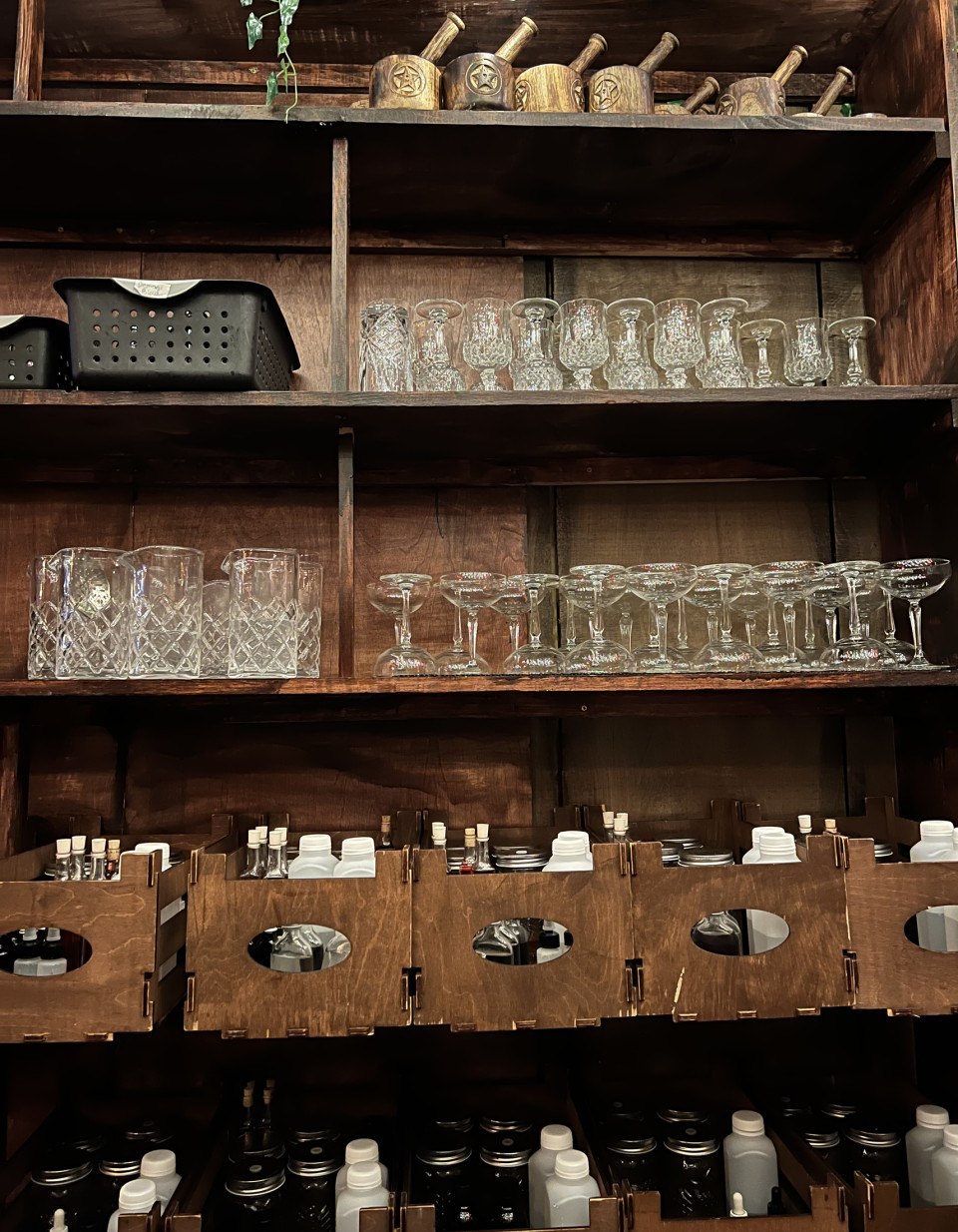 Your $60 ticket ($50 for kids) gets you five drinks, plus wand and robe rentals, naturally. (The fifth and final drink, an “Ectoplasm Shot,” is only provided for adults.)

The first drink, a prosecco for me and a non-alcoholic HallowCream Cider for my daughter, was brought out as we were marveling at our table covered with curious bottles, tools, and a “fairy house,” which would light up and open when activated with the wand and magic words we would come to learn. This was obviously the most exciting thing in the world for my “junior witch,” who declined the robe rental in favor of her own cape.

For drink number two, we were brought over to a wall of sparkling unicorn heads. Their names, we would learn, were Rapunzel, Aurora and Madonna. Each had their own draft cocktail (Madonna’s was zero-proof), which was obtained by paying them a token, placing our glasses under their mouths, and waving the magic wand. A Halloween playlist completed the mood. 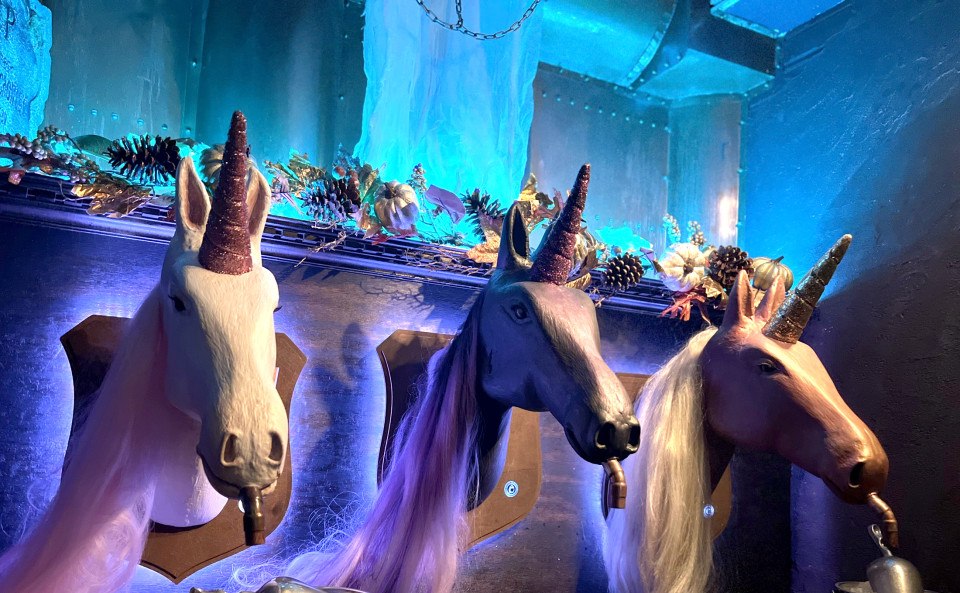 Next came the real magic (as if cocktail-spouting unicorns weren’t real magic): the potions. The non-alcoholic ingredients were clearly demarcated to avoid any mix-ups, and we were guided in making the red “Blood and Sinew” potion complete with ingredients like “bat oil,” “salamander spit,” “troll teeth,” and, obviously, the blood of our enemies. The Cauldron’s words, not ours, but we were dressed as witches, so when in Salem … 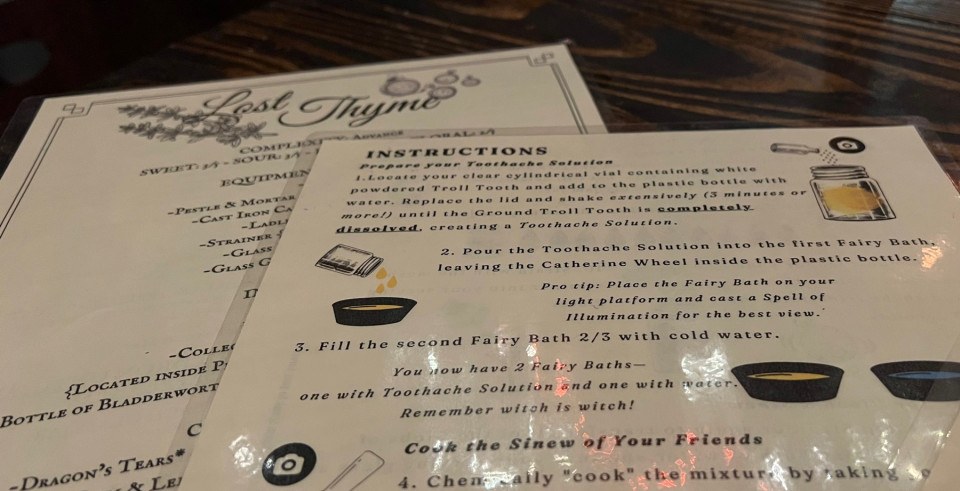 The potion masters helped us every step of the way, whether it was creating globby “sinew” in a “fairy bath,” or straining our icy concoctions into fancy glasses.

Next came the “Lost Thyme,” which meant grinding herbs with a mortar and pestle, and learning the spell to open the magical box on our table which held the ingredients. Once procured, “frost-enchanted fairy dust” was provided to make our cauldron smoke as we stirred. 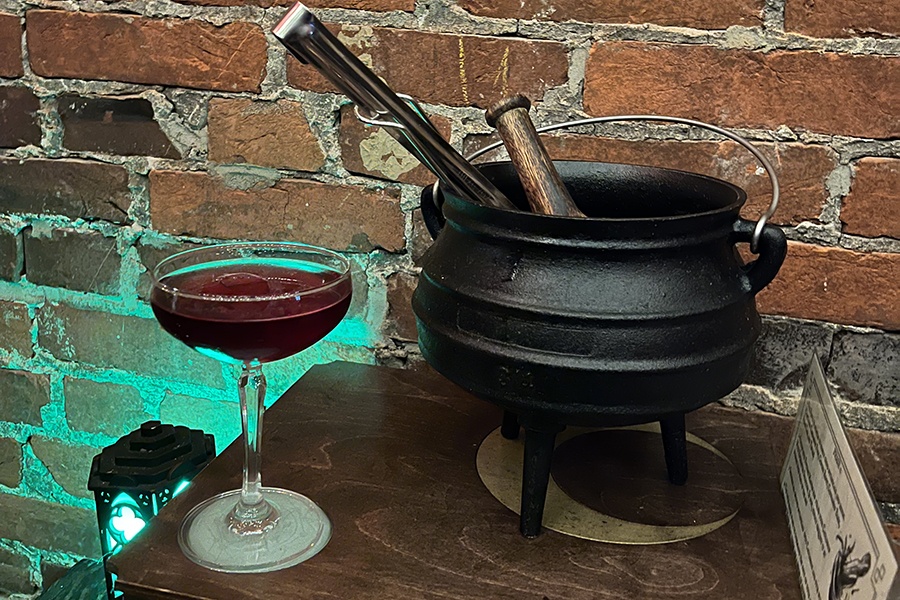 Potion-making is just one experience The Cauldron is offering for Halloween. This month, they’re also teaming up with our favorite drag queen Brittany Lynn for the Hocus Pocus-themed Night of 100 Winifreds on October 21st and  a Zombie Dinner Party on October 27th. They’ve also got pumpkin-carving and bottle-painting sessions, and of course, potion-making all year round. All experiences can be booked online. The Cauldron is located at 1305 Locust Street in Midtown Village.