Here’s when and where you can catch the 2018 men’s basketball national champions on Thursday. (Hint: It won’t be on the Main Line.) 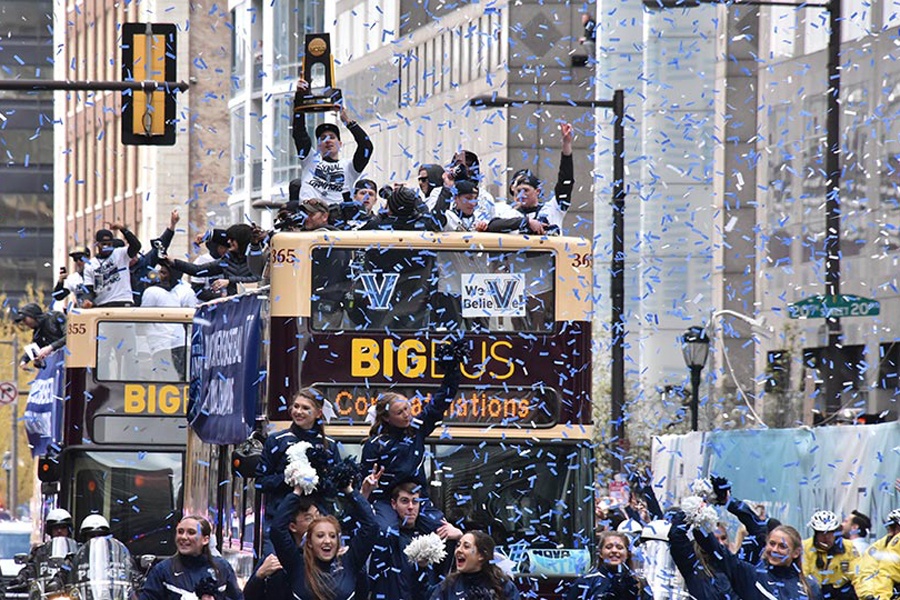 In keeping with tradition, the festivities will be held in Center City, which is sure to ruffle the feathers of more than a few old-school Big 5 folks. (You know, the guys who can’t talk Philly basketball without first mentioning that Villanova’s campus falls outside the city limits.)

Approximately 60,000 people showed up for ’Nova’s last parade in 2016. According to Philly.com, that downtown party cost about $22,000, with the university on the hook for police, emergency services, and post-event cleanup. For those of you who are interested in welcoming home the ’Cats and their new hardware on Thursday, here’s everything you need to know.

Parade floats will begin their ride at 11 a.m. on Thursday, starting from 20th and Market streets and ending with a rally at Dilworth Park. City officials say the entire event is expected to conclude around 12:30 p.m.

The following streets will be closed starting at 9:30 a.m. until approximately noon:

The following streets will be closed starting at 10 a.m. until approximately 1 p.m.:

The following streets will be closed starting at 10 a.m. until approximately 3 p.m.:

The following streets will be posted as “Temporary No Parking” zones from 6 a.m. to 4 p.m.:

Due to the street closures, SEPTA buses will be detoured from their normal routes through the area beginning at 9 a.m. through approximately 3 p.m. Detours will be posted and specific route changes will be made available on the System Status Page at www.septa.org.

Extra capacity will be added to SEPTA’s Norristown High Speed Line, Market-Frankford Line and Broad Street Line. (The NHSL provides service from the Villanova University area with stops at Radnor and Villanova stations.) NHSL passengers can transfer to the MFL at 69th Street Transportation Center to continue onward to Center City.

Stairs and elevators to Dilworth Park from the underground concourse will be closed beginning at 9 a.m. and reopened as conditions allow.