12 Things to Do in Comedy, Books, Movies, Burlesque and more 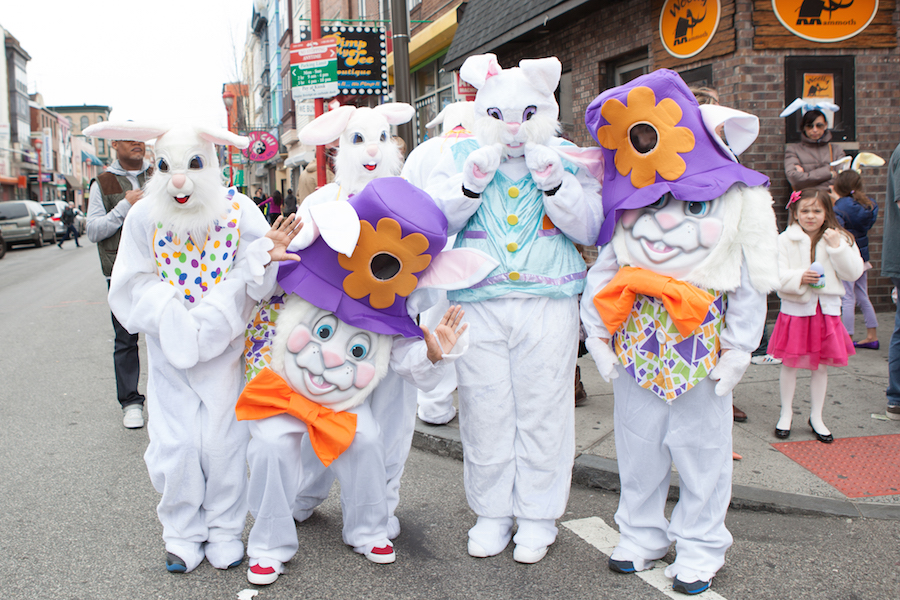 Large rabbit people will assemble for the Annual Easter Promenade on Sunday.

Rashomon Podcast Launch Party @ Good Good Comedy Theater | Wednesday, March 28
Hillary Rea, host of the long-running Tell Me A Story series, celebrates the launch of her new podcast in which “one family tells every side of the same story.” Sounds like it’ll be hilarious. This event includes contributions from Rose Luardo, Cecily Alexandria Chapman, Ruth Chapman and Hannah Trav and her family.

Jazzercise is a Language Book Launch @ L’Etage | Wednesday, March 28
Philly author Gabriel Ojeda-Sague celebrates the release of his book Jazzercise is a Language. (Only it’s not just a book, it’s “a long poem that wants to be a smiling, skinny white woman…” You gotta read the whole description.) Caolan Madden and Julia Bloch will also read from their work.

Metric — Dreams So Real @ PhilaMOCA | Thursday, March 29
A redux last week’s event, but without the nor’easter: Led by icy, dramatic singer Emily Haines, Toronto band Metric makes Canadian indie rock look cool. Their sound is tight, their lyrics are smart and they’ve got style. Though it’s sometimes billed as a documentary, Dreams So Real is a concert film, shot in Vancouver in 2016.

Greg Proops @ Helium | Thursday-Saturday, March 29-31
The Whose Line Is It Anyway alum drops by for three shows. Thursday is a recording of his podcast The Smartest Man in the World, Friday and Saturday is standup.

Sean Penn @ Parkway Central Library | Thursday, March 29
The Oscar-winning actor will read from and pre-sign his debut novel, Bob Honey Who Just Do Stuff, said to be a dystopian satire of the Trump administration. It’s gotten some negative reviews but I can’t tell if it’s legitimately bad or people just like it when artists stay in their lanes.

Ali Siddiq @ Punchline | Thursday-Saturday, March 29-31
The Houston comic tells stories about life, people and his time behind bars. This is funny but also completely nerve-wracking:

Conner O’Malley & Carmen Christopher @ Good Good Comedy Theater | Friday March 30
The two comics stop by for two shows. (The 10 p.m. is sold out but the 11:30 has tickets available.) Conner O’Malley wrote/performed on Late Night with Seth Meyers, and has made videos for Adult Swim, Comedy Central and more. Carmen Christopher is a member of the Postmen and Holy Fuck Comedy Hour, and creator of the web series Little Banks on Wall Street.

Memories of Underdevelopment @ Lightbox Film Center | Friday March 30
Tomás Gutiérrez Alea’s 1968 film stars Sergio Corrieri as a man who is left behind in Cuba after his wife and parents fled to Florida. The film is considered a masterpiece of Cuban filmmaking.

SuicideGirls: Blackheart Burlesque @ TLA | Tuesday, April 3
It’s either “the sexiest, smartest, geekiest, and most fun definitive pop-culture burlesque show” or people with electrical tape on their Nipsey Russells dancing around to the Black Keys and Die Antwoord like that’s normal.