REVIEW: In Waitress, Lots of Sugar and Lard, Not Much Filling

How could some very talented people deliver a show so devoid of authenticity? 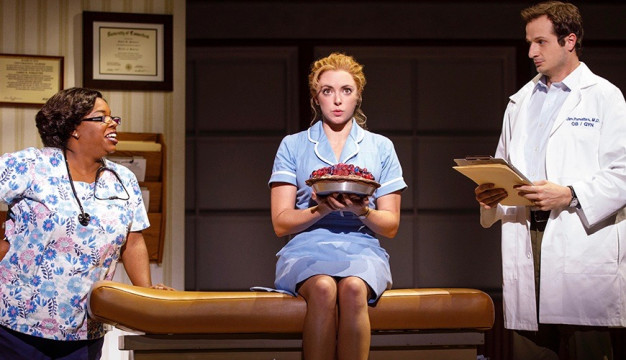 I’ve seen Sweeney Todd, read Mildred Pierce, and eaten at Magpie, so believe me when I tell you that I know the transformative power of pies. But the sad, sweet story at the center of Waitress—about a young working mother-to-be who hopes her baking skills can rescue her from a stormy marriage, and ensure a better future for her child—arrives in a musical so bloated and cartoonish that any genuine feeling is all but lost. Since there’s no suspense (everything here is predictable and by-the-numbers), the only real question is how could some very talented people—including composer/lyricist Sara Bareilles, and director Diane Paulus—deliver a show so devoid of authenticity?

The credited source material for Waitress is a lovely little movie with the same title, written by the late Adrienne Shelly. But the situations and characters here seem to me eerily similar to those in Alice Doesn’t Live Here Anymore, the great Martin Scorsese/Robert Getchell film from the mid-1970s. Both are character-driven and full of quiet humanity—more poignant than cheerful, and all the better for it.

A worthy musical might be made of them, and Bareilles would seem a good, out-of-the-box candidate to write the score. Alas, though there are some charming and clever moments in a few songs, much of Bareilles’ quirky individuality vanishes in the large-format orchestrations and big Broadway-style vocal delivery. (For the record, the singing here is often good, especially by lead performer Desi Oakley.) More damaging is Paulus’s ungapatchka direction—not only over-busy, but free of internal logic (mysterious dancing pie-people, and an orchestra that suddenly becomes visible at random intervals are two particularly weird touches, among many). Everything feels cranked up and mostly played for easy laughs.

If there’s a lesson in Waitress, it’s one that I’ve often associated with cheap, mass-produced baked goods—it would be a lot better with half the ingredients, and only a fraction of the sugar.

Waitress plays through February 18 at the Forrest Theatre. For more information, visit the Broadway Philadelphia website.