REVIEW: Something Rotten! at the Academy Serves Up Ham(let) & Eggs

The audience loved this musical Shakespeare send-up. So did I—sometimes. 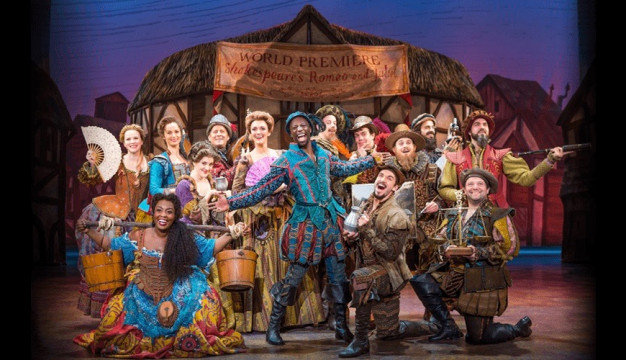 The touring cast of Something Rotten!, now at the Academy of Music.

OK, maybe it’s not comedy gold. Yet, somehow I was still giggling minutes after I heard it. That’s the way it is with Something Rotten!, a roller-coaster ride of a musical whose sparkling, vibrant touring company has arrived this week at the Academy of Music. Something Rotten! celebrates the joys, woes, and endless labor pains that it takes to make a show.

Did I mention it’s set in the Renaissance? And that the show’s chief villain is that preening shit and literary thief, William Shakespeare? The Bottom Brothers—Nick (Rob McClure) and Nigel (Josh Grisetti)—labor mightily to succeed as writer/producers (the latter not even a word yet), but they’re no match for the rock-star like popularity of the Bard (Adam Pascal, suitably glamorous), whom we’re told “puts the ‘I’ in iambic pentameter.” What’s left for the Bottoms boys to do?  Consult an oracle, naturally—the enthusiastic if unreliable Thomas Nostradamus (Blake Hammond, terrific).

At its best, Something Rotten! is madcap and keeps us laughing almost despite ourselves, the groan-worthy jokes delivered here with stunning energy by a fine cast. McClure sings, dances, and acts with verve (indeed, he needn’t work quite so hard to please us). Pascal is still swoon-worthy, his fine voice showing no signs of Rent-wear. Grisetti is adorable, and in addition to Hammond there’s good support from Maggie Lakis and Autumn Hurlbert in the female leads.

Yet it doesn’t always click. The Act I showstopper, “A Musical,” predicts that this new form will change the world. Strangely, though, apart from this number and a similarly rousing anthem in Act II, “Make an Omelette” (don’t ask), the songs in Something Rotten! mostly make little impression. There’s far more comic pith and vinegar in the spoken dialogue. It’s also a 150-minute show that would be better at half the length. (If I were a play doctor, I’d recommend turning the piece into a satire/musical hybrid and cutting all the songs except the two above—but I’m not, so I won’t.)

Still, the audience clearly loved it. So did I—sometimes.

Something Rotten! plays through March 4 at the Academy of Music. For more information, visit the Kimmel Center website.