Get your fill of spring’s most beautiful blooms at these Philadelphia-area gardens and arboretums. 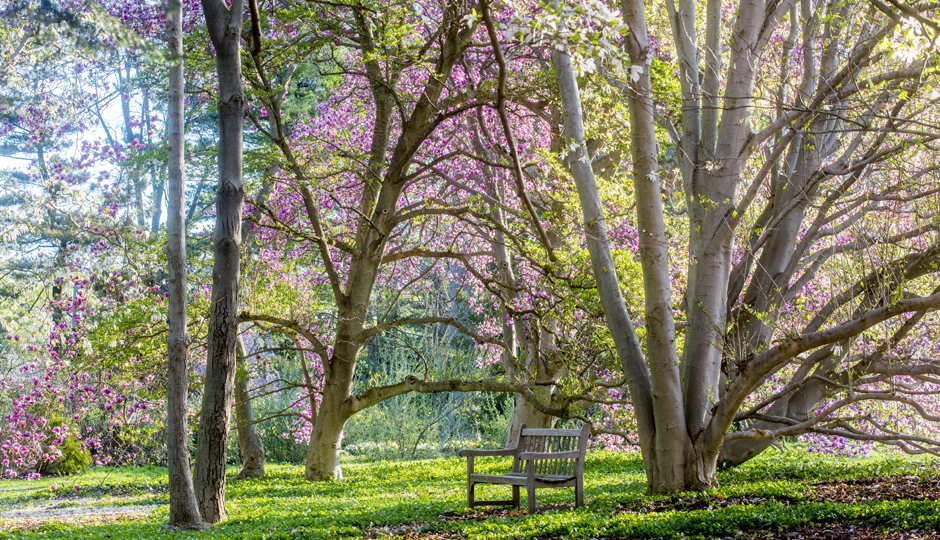 The Barnes Arboretum outside Philadelphia boasts spring blooms and breathtaking gardens over its 12 acres. / Photograph by Rob Cardillo

Okay, so spring’s been sort of hit or miss so far. But there’s no better way to welcome it — and relish it — than a spin through one of our region’s most spectacular gardens or arboretums. Say it with us: April showers bring May flowers.

Awbury Arboretum, Germantown
This historic 56-acre Germantown oasis was originally the summer estate of the Copes, a wealthy Quaker family who laid out their grounds in the English landscape garden tradition (with the help of none other than horticulturalist William Saunders, designer of the National Cemetery at Gettysburg and the U.S. Capitol grounds). In 1916, the family donated the arboretum for “public enjoyment,” and it’s now in the care of a nonprofit dedicated to its preservation and community outreach. In addition to the extensive groves, gardens, and meadows, Awbury is home to a pond and watercourse, a natural-materials playground called AdventureWoods, and a farm. The 16-acre farm is perhaps best known for its resident goats, who attend frequent Goat Walks and other activities with the community and will also make quick work of your Christmas trees after the season ends. Awbury is open to the public 365 days a year.

The Barnes Arboretum, Merion
Before the Barnes Foundation parked on the Parkway, the arts institution resided on the Main Line at the late Albert C. Barnes residence and gallery that’s nestled in a 12-acre arboretum. The arboretum, a work of art in its own right, is now a destination all its own, boasting over 2,500 varieties of woody plants and perennials, many of them considered rare (ever heard of the monkey-puzzle tree?). The peony and lilac collections date back to the early 1900s, and the herbarium, established in 1968, contains more than 10,000 specimens. There’s also a garden of medicinal plants with over 170 species and cultivars. In 2018, the arboretum launched an educational partnership with St. Joe’s, expanding outreach and opportunities to learn and volunteer. The arboretum is open for public visits daily through October.

Bartram’s Garden, West Philly
Billed as “America’s oldest living botanical garden,” this oasis on the Schuylkill was started in the 18th century by Quaker farmer and self-taught botanist John Bartram, who was determined to collect as many different North American plants as he could. He traded cuttings, seeds and info with fellow farmers Thomas Jefferson and George Washington, and eventually was named Royal Botanist to King George III. Today his former estate is a 45-acre National Historic Landmark featuring native and medicinal plants, meadows, ancient trees, and breathtaking views of the city skyline. They also host regular community events, including Little Explorers sessions for children.

Bowman’s Hill Wildflower Preserve, New Hope
Some people want gardens that scream. If you prefer one that whispers, head for this 134-acre preserve that houses 800 species native to Pennsylvania, including many rare and endangered types. These are the plants with charming old-timey common names like shooting star, toadshade, lady’s slipper and lizard’s tail.

Chanticleer, Wayne
The garden path may only be a mile long, but it’s a looping tour around the world. The Teacup Garden is a verdant mess of tropical vines; the neatly planted cut flower and vegetable garden evokes Colonial days; and the clever Ruin Garden boasts partial stone walls, reflecting pools, sculptures and trees that, combined, nod to the 1925 home that once stood there. Flora is unlabeled on purpose; Chanticleer’s seven full-time gardeners are eager to engage.

Grounds for Sculpture, Hamilton, NJ
At this New Jersey attraction, you’ll find nearly 300 works of contemporary art, including founder Seward Johnson’s (somewhat creepy) lifelike human statues, spread out among 42 acres of gardens, ponds, meadows and trees — lots and lots of trees. Also: Peacocks. (Don’t try to pet them, yo.) There are rotating exhibits, an indoor art center, and a variety of dining options. Note: Advance reservation are required, so you need to plan ahead. 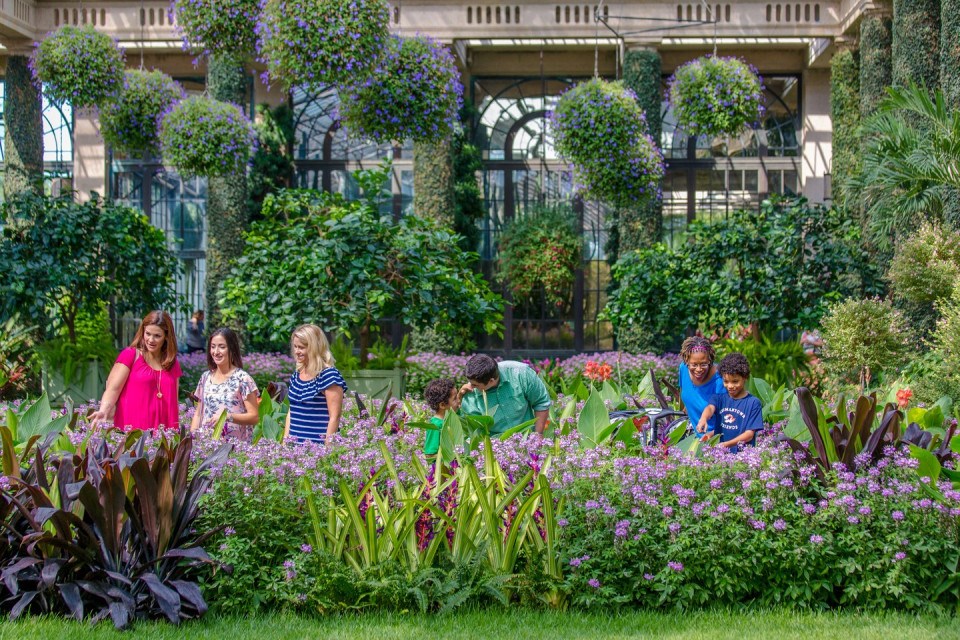 It’s one of the most lauded gardens in the country. (Yeah, we said country.) A du Pont envisioned this space, which gets more theatrical with every turn. There are water-fountain displays fit for Versailles, a ringing Chimes Tower, forests, meadows, and a mind-boggling array of flowers. (Bring a real, non-phone camera.) Leave time for the Gatsby-esque Conservatory, where rooms of gargantuan hanging planters, orchids, fruit trees and more will make you rethink your lame houseplants.

Philadelphia’s Magic Gardens, South Street
It’s a garden. It’s art. It’s pop culture. It’s activism. It’s downright fascinating. Sure, there are no flowers or grass at this installation on South Street, but this garden is as mood-lifting as greener pastures. Artist Isaiah Zagar began excavating this South Street property in 1994; 14 years later, he finally finished. The result is a subterranean funhouse enveloped in mosaics crafted from tiles, mirrors, mini figurines and wheels. Plan your visit around one of the tours, artist talks, classes or concerts. Note: Advance reservations are required.

This Penn-owned sanctuary is as historic as it is lush. The glassed-in fernery was built in 1899; the immaculate Rose Garden was created in 1888; and the serene Japanese Hill, rich with Far East specimens, dates back to 1905. Morris a great spot to unplug with the kids. There’s a soaring treehouse playground (including an oversize nest with giant birds’ eggs to climb) and the Garden Railway, a not-so-small train that whizzes around a quarter-mile track, past mini versions of Philadelphia landmarks made entirely out of natural materials.

Shofuso Japanese House and Garden, West Fairmount Park
This 1.2-acre garden tucked inside West Fairmount Park is a bit of a hidden gem. It’s a 17th-century-style Japanese walled-and-fenced garden, comprised of a koi pond and island, tea garden and courtyard garden. Originally dreamed up as part of an exhibition at New York’s Museum of Modern Art in the 1950s, the house was moved to Philly and reassembled in 1957, and the surrounding garden was redesigned in 1958 in the style of a 17-century garden to complement Shofuso. The 20 waterfall murals you’ll see were donated in 2007 by renowned artist Hiroshi Senju; his artwork replaced the original murals that were destroyed by vandals in the 1970s. If you plan your visit right, you can attend a tea demonstration led by kimono-clad guides from the Urasenke Tea School or a taiko-drumming workshop, held weekly. Admission is by timed tickets.

Tyler Arboretum, Media
There’s a little bit for everyone at this 650-acre nonprofit preserve in Delco: 17 miles of hiking trail, gorgeous gardens and plant collections, more than 195 documented species of birds, a meadow maze filled with daffodils, and, in late summer, a 1,400-square-foot butterfly house. In late spring, be sure to check out the blooming azaleas, hydrangeas, rhododendrons and bottlebrush buckeye. Mother’s Day weekend is the annual plant sale!

Welkinweir, Pottstown
To appreciate Welkinweir, you really need to be into trees and shrubs as well as flowers. But trees and shrubs bloom, as the stewartia, franklinia, clethra, hydrangeas, and rhododendrons and azaleas here prove. The (hilly) grounds include a children’s garden, water gardens, a ruined barn and an elegant estate — and there are plenty of perennials, too. Cautionary note: They’re only open Monday through Friday; weekends are reserved for members (and, often, weddings). Don’t miss: the spectacular weeping copper beech. The reflecting pool at Winterthur / Photograph by flickr user jcapaldi

Less showy than Longwood (but equally spectacular), this garden, museum and library is another gift from the du Pont dynasty. Hard- and soft-scaped areas are expertly planned yet still natural-looking, and blooms arrive in waves of color. A tram provides an orienting tour; paths are meandering; the Enchanted Woods children’s garden even delights adults; the Americana objects housed in the museum are fabulously quirky. (The Campbell’s Soup tureens will inspire you to dust off your good china.) Reservations are recommended.

Wyck, Germantown
This National Historic Landmark specializes in roses, which should just be starting to come into their own in May. The Rose Garden dates to 1820 and contains a number of specimens that would be lost to cultivation if not for their preservation here; among them are ‘Elegant Gallica’ and the gallica-damask hybrid ‘Lafayette,’ supposedly planted to mark a visit by the French general in 1825. Other standouts include cultivars later used in breeding programs, including early China roses and Rosa gallica officinalis, which has been cultivated at least as far back as the Crusades. The on-site farm provides lessons, hands-on experience, and a share of fresh produce when you volunteer.