REVIEW: Disney’s Aladdin at the Academy of Music – A Magic Carpet Ride with an Unscheduled Stop

This hugely energetic show favors spectacle over characters, but the audience doesn’t seem to mind. 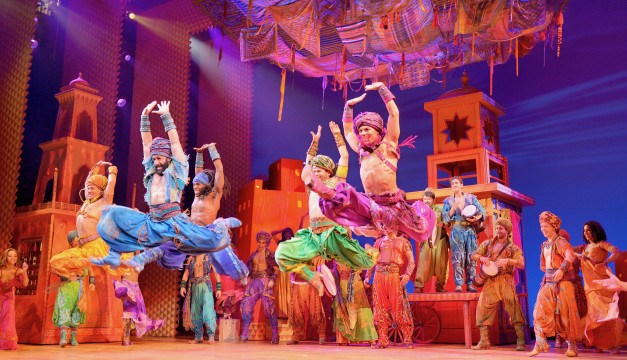 Aladdin, now at the Academy of Music through July 1. (Photo by Deen van Meer)

Even the most polished theatrical productions sometimes encounter a roadblock. On opening night, Disney’s Aladdin at the Academy of Music hit two. In Act I, a golden stalactite crashed to the floor, and Act II’s coup-de-theatre magic carpet proved uncooperative. Total delays were not inconsequential—20 minutes or more.

But such was the enthusiasm of the audience, and the dizzying momentum of the show, that nobody seemed to mind. If anything, it made the buildup more exciting.

Likewise, there was no worry that the dramatic tension of the story might be broken. There was none.

Even by Disney spectacle standards, Aladdin—directed and choreographed with panache by Casey Nicholaw—elicits oohs and aahs for its jewel-toned gorgeousness and special effects. That recalcitrant magic carpet, finally sailing through a starry sky, was worth waiting for (in this case, literally!).

A likable cast, led by the wildly crowd-pleasing Genie of Michael James Scott in a performance that looks like a cross between Cab Calloway and Flotilla DeBarge, is unstinting with their charms. There’s enough energy here to light all of Philadelphia through any summer heat wave.

An adorable little girl sitting behind me should file her own review—clearly, she knew every single moment, and was beside herself with joy.

I, on the other hand, found the show so cranked up that what should have been key plot points barely landed (the resonant acoustics of the Academy also obscure some lyrics). Because this is a family show, there’s no room for anything actually scary or sad, which drains Aladdin of what little suspense it might have had.

In many welcome ways, this adaptation, based on the celebrated 1992 animated movie, shows a more woke Disney, particularly in depicting the role of Jasmine (an appealing performance by Isabelle McCalla), who has more spunk and agency than the Disney Princesses of my childhood. It’s lovely to see a diverse cast at the center of this show.

At the same time, Aladdin not infrequently traffics in stereotypes and mixed messages. Even the ostensibly more empowered female ensemble members strut their stuff in dances that evoke Las Vegas runways more than the Arabian Nights.

Still, Aladdin is easily recommendable, especially to those who enjoyed the movie. Nicholaw and a writing team that includes Chad Beguelin and Tim Rice (who are also working with lyrics by the late, great Howard Ashman) provide enough sly wit to keep adults entertained, and the younger generation will adore it.

I enjoyed a lot of it, too. Still, given the show’s central plot, I’ll close with three Critic’s Wishes…