REVIEW: In Love Never Dies at the Academy, He’s Baa-aack

There’s little here about love, but the show suggests that obsession lasts forever. 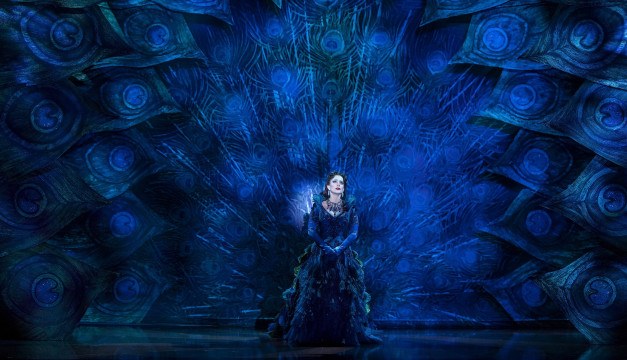 Am I Blue?: Love Never Dies, now at the Academy of Music. (Photo by Joan Marcus)

The real subject here is Love Never Dies, Sir Andrew Lloyd Webber’s lush, creepy, spectacular, overwrought, often incomprehensible, and ultimately embarrassingly entertaining follow-up to The Phantom of the Opera. Before we get there, though, let’s take up the fascinating but fraught topic of sequels in general. Specifically, by what standards are we to measure them?

Consider a continuum represented with elegant symmetry by Godfather movies II and III. The former, against all odds, is actually better than the original (and that’s really saying something). The latter is so terrible as to almost nullify the two great films that preceded it.

Both extremes are… well, extreme. But in my experience, the better-than-the-original sequel is rare. More often, disappointment awaits.

Perhaps that’s why Love Never Dies was so long-aborning, the reviews of its West End premiere production so mixed. But Webber and company stuck with it—over nearly a decade, the show has been retooled in productions around the globe, and finally arrives in the U. S., where it is certainly handsomely produced. 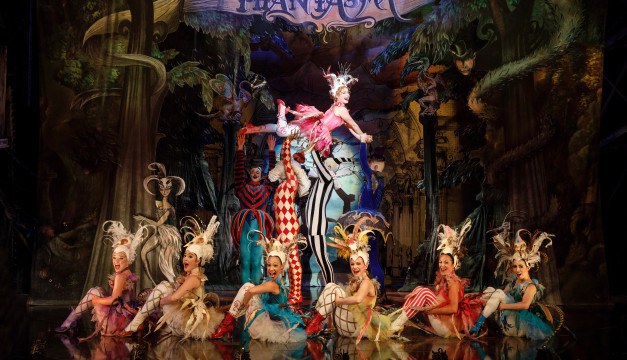 Send in the clowns: Love Never Dies, now at the Academy of Music. (Photo by Joan Marcus)

The story, too, has jumped ahead in time. It’s now 1907, we’re in a vaudeville house/freak show in Coney Island, and again the protagonist lurks in the shadows, as half-handsome as ever and at least twice as agitated.

Yes, Mr. POTO still hankers after soprano Christine Daaé, who remains in Paris but is about to cross the pond for her American debut. Christine is now married to Raoul, who drinks, gambles, and generally treats her badly. But on the bright side, she has an adorable young son who (wait for it) has The Gift for Music. As for what she wants… well, it’s hard to figure out, but she sure is jittery.

The actual plot of Love Never Diesis nearly impossible to summarize, but there is a takeaway. Watching the behavior of the characters onstage, who among other things display bad parenting on an almost Lohan family level, I suddenly understood that when my parents told me to stay away from people in show business because they are all insane, I should have listened to them. Frankly, I don’t see much love here, but it’s clear that obsession is forever.

Webber’s score pulls from a veritable grab-bag of styles, ranging from 1920s pastiche to rock, but as with the Phantom, he remains most at home in a grand romantic idiom. The title song is catchy enough, though what I liked best was a fizzy, witty waltz quartet called “Dear Old Friend.”

What ultimately wins the day is the sheer visual impact of the show, directed by Simon Phillips and with spectacular scenery by Gabriela Tylesova that draws on a Tarot-like imagery. I don’t know what this has to do with Coney Island, but never mind.

The cast throw themselves into the action with commitment, and on opening night, everybody was in good vocal form. Bronson Norris Murphy (Phantom), Meghan Picerno (Christine), and Jake Heston Miller (as young Gustav – he alternates in the role) all delivered with aplomb, and I especially enjoyed the veteran Broadway performer Karen Mason, who shines in a fun supporting turn.

What the show doesn’t have, though, is a hook. There’s no chandelier crash to focus on, no equivalent to “Music of the Night” that you’ll be whistling on the way out of the theater. Oddly, Love Never Diesfalls flattest in the sections where Christine and POTO are together, which feel stale and over-familiar. It’s a case of lightning not striking twice. 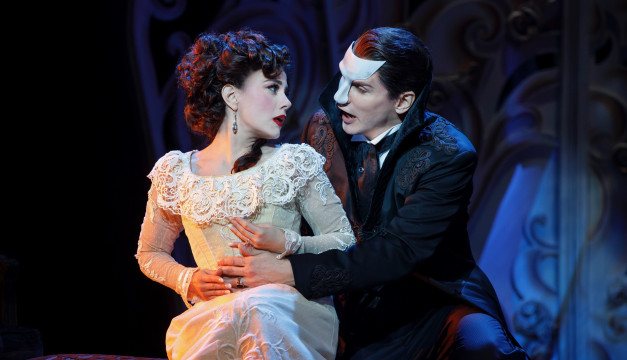 You look familiar: Love Never Dies, now at the Academy of Music. (Photo by Joan Marcus)

Will Love Never Dieswin new audiences? I wonder. To me, the late ‘80s musical theater style it represents now seems as much a relic of history as the Punic Wars. But I have no doubt that scores of Phantom enthusiasts will enjoy it greatly. And truly, you could not ask for a better venue than the glorious Academy of Music, which itself evokes the legendary Phantom more vividly than anything on the stage.

Love Never Dies plays at the Academy of Music through October 7. For more information, visit the Kimmel Center website.