REVIEW: In The Humans, Things That Go Bump in the Night 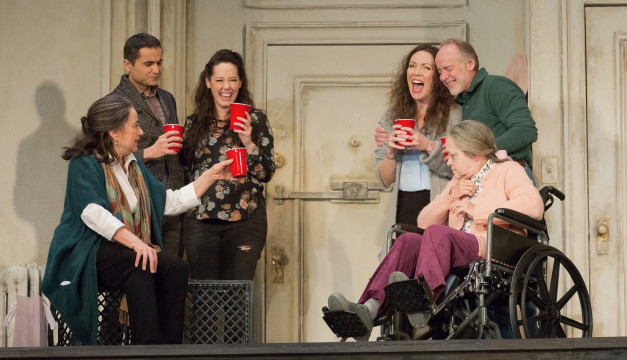 The Cast of The Humans at Walnut Street Theatre. (Photo by Mark Garvin)

What is the distance between Scranton, PA and Manhattan? Google Maps tells us it’s 123 miles (around 2 hours 15 minutes with light traffic). But the metaphorical answer served up in The Humans by playwright Stephen Karam is far more interesting—also, deeper, funnier, and sadder.

You see, in The Humans, Brigid, the adult daughter of a hardworking Scranton family (mother Deirdre, father Erik), has moved to Manhattan to live with her do-gooder boyfriend, Richard. She’s following a pattern set by her sister, Aimee, who also left home to work as a lawyer. In other words, the younger generation aspires to a better life—even a different class.

Despite a superficial show of family solidarity over Thanksgiving dinner, it’s soon evident that a gulf exists between the two sides. Erik, in particular, is nervous and fretful—he imagines shadows of 9/11 everywhere. Deirdre seems more even keel, but she’s quick to interpret her daughter’s independence as a personal slight, and enjoys pointing out the disadvantages of her new living situation. What Brigid sees as the new apartment’s “interior courtyard” view is, to Deirdre, a “dark alley.”

Indeed, dark alleys abound in The Humans, though it’s probably fair to classify it a comedy. The set-up is almost Neil Simon-ish—a group of quirky people engage in generation-gap bickering in a New York apartment. But Karam very slyly introduces disquieting interruptions, including scenes punctuated by a constantly flushing toilet. (Shit is a recurring metaphor here.) I had wondered if the play might have lost some power since its much-acclaimed New York premiere in 2015, but quite the contrary—our current political climate has only sharpened the sense of American families working hard yet sliding inexorably into an abyss.

At Walnut Street Theatre, director Bernard Havard follows closely the lines of Joe Mantello’s original, with its fascinating, slightly jarring bi-level staging. The six actors—Greg Wood (Erik), Mary Martello (Deirdre), Alex Keiper (Brigid), Jennie Eisenhower (Aimee), Ibrahim Miari (Richard), as well as Sharon Alexander, who plays the grandmother, Momo—all have good individual moments. What’s missing is a more nuanced sense of family conversation and bonds, and especially the resentments that build through the evening. Without that, the production doesn’t quite cut to the core of Karam’s fine play. But there’s still some powerful work here.

The most controversial aspect of The Humans—and the one audiences are likely to talk about as soon as the curtain comes down—is an eerie overlay suggesting something akin to a ghost story. Initially, I thought it was a flaw in the play, but I’ve come to find it intriguing as well as insightful. Those things that go bump in the night? Spoiler alert: It turns out they’re us.