REVIEW: Around the World with Stew in Passing Strange

Wilma’s snazzy revival makes a good case for this charming but quirky show. 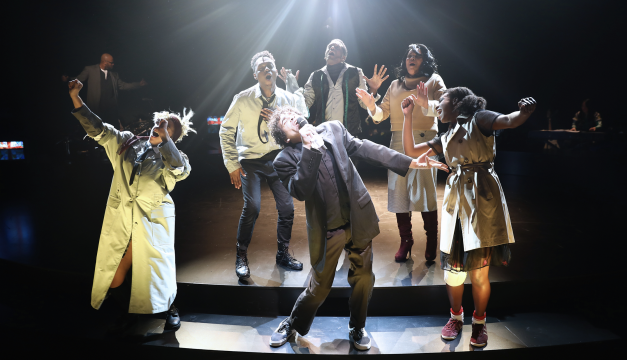 The Cast of Passing Strange at the Wilma Theater. (Photo by Bill Hebert)

Old and new shake hands in the Wilma’s snazzy, exceptionally well-performed Passing Strange. The Broadway cult-hit, receiving a major revival here ten years later, still feels mostly fresh, original, and energized. Yet the central story of the piece—an exploratory journey to find a sense of identity—is as traditional as any literary theme.

Created as a kind of memoir-in-concert by Stew, aka Mark Stewart (who wrote book, lyrics, and in collaboration with Heidi Rodewald, music), Passing Strange traces his life from childhood in Los Angeles, where he grew up feeling rudderless within his own African American, church-centered community. Told through a double perspective—by the Youth, who represents the young Stew in mid-experience, as well as an older Narrator, who is Stew looking back from older adulthood—we follow his travels, both metaphoric and literal: specifically, the exciting, formative years he spent in Amsterdam and Berlin. The rock-inflected score not only moves the show forward, but also represents the artistic voice that Stew developed along the way.

That’s a lot of narrative layers, and it doesn’t always cohere. The book and lyrics mostly employ dry wit and ironic detachment. (Perhaps this, too, is the result of his new European-ness.) Often, the drollness is welcome. The opening audience laughed often and heartily, and I sensed waves of relief when Difficult Themes (race, identity, religion) were dispatched with lightness and humor, rather than anger and finger-wagging.

But all this wryness makes it difficult to follow Passing Strange into more serious and sentimental terrain, as it asks us to do in the second act. Although Stew’s love of his European adventures is palpable, too often they are reduced to shorthand clichés. Amsterdam here is summed up through pot-smoking and multi-partner sexual adventures; and Berliners are notable for aggression and humorlessness (“Achtung!” flashes on the multiple TV sets that are a key element in Scott Pask and Thom Weaver’s projection-heavy design).

I find Passing Strange more successful in parts than as a whole, but I can imagine many audiences surrendering completely to its quirky charms.  Certainly, the Wilma production makes a good case for it. The ensemble cast and accompanying orchestra are terrific. Kris Coleman is a fine narrator. (When the piece was first done, Stew himself played this role, and was also part of the band. His presence lent a sense of authenticity that, inevitably, is lost without him, but Coleman is as good a substitute as you could hope for.) Best of all, Jamar Williams (the Youth) is superb, dispatching his singing, dancing, and acting responsibilities with insouciant ease and heart-melting charisma.