THEATER REVIEW: In the Wilma’s Adapt!, Immigration Even Pre-Trump Is No Picnic 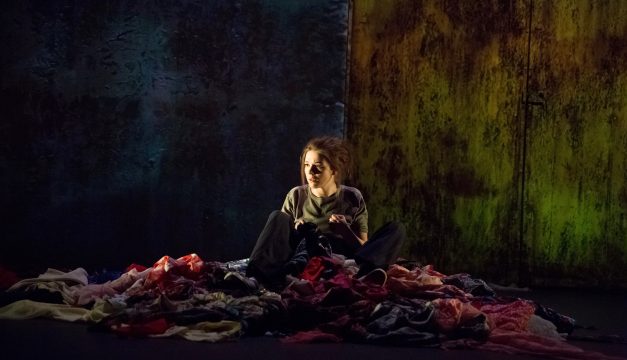 Aneta Kernová in Adapt! at the Wilma Theater. (Photo by Alexander Iziliaev)

A few weeks ago, I saw the Broadway revival of The Glass Menagerie—a highly unconventional, radically pared-down take on the play—while it was still in previews. Though I didn’t agree with every choice, I found it profoundly moving. But I was certain it would perplex, even enrage many other people. Theater can be like that.

I’m leading with this here because I have a similar reaction to Adapt!—alas, this time from the other perspective. I can imagine some audiences loving Blanka Zizka’s playwriting debut, a memoir-ish chronicle of a young Czech woman leaving her country in the 1970s.  But though it was often very striking to look at (more on that in a minute), I find the script hyperextended and tedious, largely recycling familiar tropes on immigration and assimilation.

Rather than summarize, I’ll let Zizka speak for herself. From her director’s note: “Adapt! explores a moment of displacement, when Lenka—the protagonist—has cut herself off from the world she knew, but hasn’t yet learned what the new world will bring… the exploration of this existential moment has gradually taken on the form of a surreal dream… the Czechs have developed an appreciation for ironic humor and absurdity.” 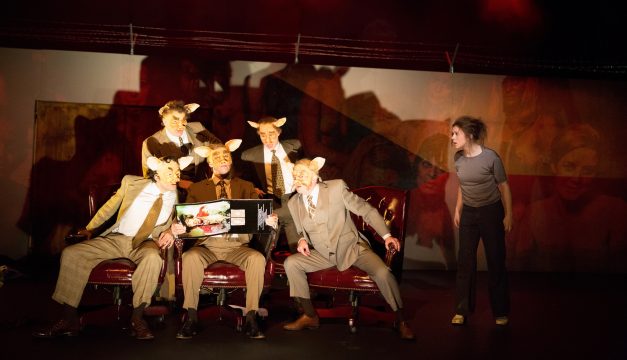 The Cast of Adapt! at the Wilma Theater. (Photo by Alexander Iziliaev)

Add to this that Aneta Kernová, the actress playing young Lenka, is appealingly free of artifice. Would that the same could be said of the repetitive script and crudely-drawn characters. I pity the supporting actors, largely forced to play attitudes—there’s little nuance in the dialogue or tone.

When Adapt! works, it’s due to the staging and design. Zizka also directs here—in that familiar role, she shines. (And it’s a fair to say that playwriting is more than words, especially in a conceptual piece like this one.)  When she makes her points through images and sounds (a rich landscape including original music and Czech protest songs, though the scene-stealers are Dvorak, Chopin, Beethoven, and Madonna), the stage often brims with originality and an odd, desolate beauty. When it comes to language—not so much. Ultimately, Blanka Zizka’s playwriting debut showcases her considerable skills… as a director.