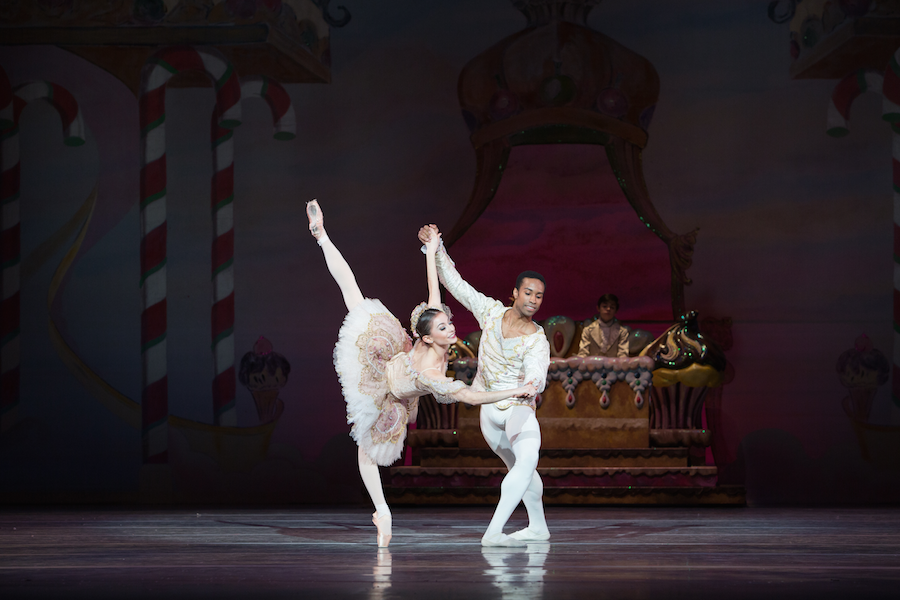 Pennsylvania Ballet’s production of George Balanchine’s The Nutcracker continues at the Academy of Music through December 31. (Alexander Iziliaev)

Brandon “Taz” Niederauer @ Fillmore Philly
This kid can shred. The 14-year-old guitar phenom has a rep for inventive, agile, show-stopping solos — the kind of stuff that leaves the rest of the song behind in pursuit of rock/blues glory. Plus, he’s already mastered the “I am playing this guitar so awesomely that I’m in terrible physical pain like seriously it’s killing me somebody help” face.

Actually @ PhilaMOCA
The “singer/director/actress” from L.A. plays her first-ever Philly show, with her band Patriarchy. It’s moody and noisy and poppy and distinctly old-school, with an ’80s/Atari/horror film vibe. This video may creep you out:

Disney on Ice presents Dare to Dream @ Wells Fargo Center
More bloodless, family-friendly holiday fare, although everybody will be wearing knives on their feet so you never know. Stars Disney heroines from Frozen, Moana, Cinderella, Beauty & the Beast, etc.
Through January 1.

Colleen Green/Cassie Ramone/Joe Jack Talcum @ Creep Records Store
A killer lineup from the good people at Punknews. You know Joe Jack Talcum, of course, from The Dead Milkmen. Cassie Ramone of the Vivian Girls and the Babies just released a new album called Christmas in Reno. Colleen Green makes excellent music under her own name. Also: trivia, Santa and a cassette you can only get at this show.

Taylor McFerrin @ William Street Common
It’s been a few years since DJ/electronic musician Taylor McFerrin dropped his only full-length record, Early Riser, and it’s nice to have him back. Like his dad (Bobby McFerrin, obvs), Taylor thrives on upbeat, soulful sounds and simple melodies that bubble out of complicated, atypical sonic concoctions . Where some electronic artists leave you cold, he keeps it warm.

Jim Brickman @ Keswick Theater
There’s a lot of ironic holiday entertainment out there. If you’d prefer something wholesome and moving, you want Jim Brickman’s “A Joyful Christmas” show. The renowned pianist keeps it cozy and classy.

PUFF Xmas Extravaganza @ South Street Cinema
Two days of holiday horror films from the good people at Philadelphia Underground Film Festival. Friday: Hounds of Love & Die Hard. Emma Booth and Ashleigh Cummings star in Hounds of Love — a horror thriller about teenage girls stalked by a pair of serial killers in Perth, Australia in 1987, around the Chrissy Hols. That’s what Australians call Christmas time. (And they give each other Chrissie prezzies. They’re weird.) Peppermint hot chocolate will be served.
Saturday: Good Tidings & Home Sick. Two more holiday horror films. In Good Tidings, a homeless vet takes on a pack of murderers dressed like Santa. Home Sick is a low budget holiday fable about “a maniac with a suitcase full of razorblades [who] unleashes a super human killer upon a group of kids in a small Alabama town.” More peppermint hot chocolate will be served.

Annie Lederman @ Punchline
Standup comic Annie Lederman grew up in the Philly burbs, which might have contributed to her dark, sarcastic streak. She went on to appear on MTV’s Girl Code and Comedy Central’s @midnight, and lent her voice to Grand Theft Auto V. Through Saturday, December 23.

Beauty and the Beast @ Media Theatre
Disney’s Broadway musical about a lady who dates a monster. Runs through January 14.

Jack Frost Saves Christmas @ Media Theatre
Austy Hicks stars in this family-friendly play about a boy who’s sad because everything he touches turns things to ice. Saturdays at 11 a.m. and Sundays at noon. Through December 31

Lil Uzi Vert @ The Liacouras Center
The “emo hip-hop” artist released his debut record Luv Is Rage 2 in August, scoring a Grammy nom and throngs of young fans. In addition to the big Liacouras Center gig on Friday, Lil Uzi Vert will play the intimate nightclub NOTO on Saturday.

Messiah @ Kimmel Center
The Philadelphia Orchestra and the Philadelphia Symphonic Choir join forces to perform Handel’s epic 1741 oratorio. Cristian Macelaru conducts. It’s a Christmas tradition, but kind of a strange one, since it covers not only the birth of Jesus but the death and resurrection as well.

FV @ Voltage Lounge
This young Philly band does alt-rock and post-punk like you used to hear on the radio after you got dumped. Dramatic, but not exactly emo, you know?

George Balanchine’s The Nutcracker @ Academy of Music
PA Ballet presents the holiday classic about fairies, mice and such. Through December 31.

Frost Giant @ Kung Fu Necktie
This hellacious metal-hardcore band from Philly is inspired by Nordic mythology, and has the Bancamp tags to back it up: “Viking metal,” “epic metal,” “folk metal,” etc. It’s cold-weather music.

Sketch Comedy: The Christmas Files @ PHIT
Jack O’Keeffe writes and directs this evening of holiday-themed sketches. The official description is intriguing: “The Christmas Files, a destined-to-be Holiday classic, takes you deep into the secret machinations of the FBI as they investigate the TRUTH behind Christmas Magic.” Friday and Saturday.

Get Out @ Uncle Bobbie’s Coffee & Books
A free screening of my favorite movie of 2017, followed by a discussion led by Princeton professor Imani Perry.

We Were Right Before Christmas @ Underground Arts
Should we keep trusting the process? Is Nick Foles up to the challenge? These and other sports questions are kind of basic and probably won’t be discussed when podcasts The Rights To Ricky Sanchez (about the Sixers) and BGN Radio (about the Eagles) set up shop at Underground Arts on Friday. Each will record separate episodes, then they’ll team up for one big one.

Mars Parker & Friends Holiday Show @ Underground Arts
The jazzy and soulful Philly rapper/singer gathers his friends for an evening of music to move you. Also on the bill: Cloud Gem, Balmour, Harvey Cash and Kilconfirmed. John Vettese at The Key did a Studio Sessions with Mars Parker back in February and it was one of the best of the year.

Ookay @ Fillmore Philly
A DJ and producer of note in the dance/trap scene, Ookay has collaborated with Diplo, Marshmello, Showtek, Crabs Whistler, Sasquash, CharlestonCheu, Zyrtec and Atlantis Marmoset. Yeah, after awhile I just started making up names there.

DJ Jon Solomon’s 25-Hour Holiday Radio Show @ WPRB
Every Christmas Eve my pal Jon “the human radio station” Solomon takes to the air on Princeton’s WPRB for a full-day-plus radio show, playing only holiday songs. But don’t expect the usual fare; only the strangest, coolest, most interesting songs make the cut. Expect some Wailers, maybe a few Misfits parodies, perhaps an epic story about a Christmas Snail — who knows? Requests are welcome. Starts Sunday, December 24 at 5 p.m. and ends Monday, December 25 at 6 p.m.

MatzoBall @ Rumor nightclub
The annual party for Jewish singles, thrown by the Society of Young Jewish Professionals. The web site promises “the most epic one-night-stand of the year,” which is hot.