8 Things to Do This Week in Comedy, Books & Art 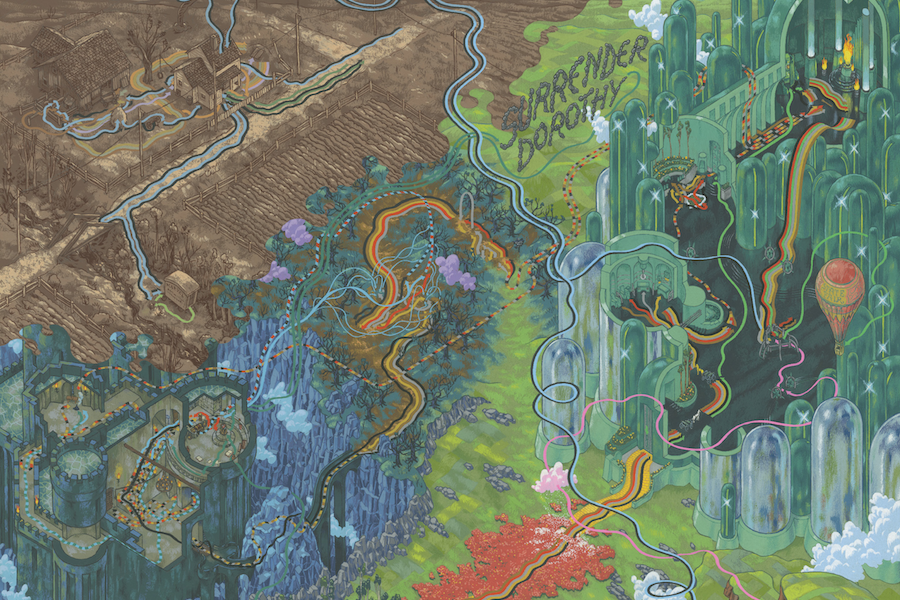 A detail from the Wizard of Oz map from Cinemaps: An Atlas of 35 Great Movies (Quirk Books). Authors Andrew DeGraff and A.D. Jameson will be at PhilaMOCA on Sunday.

Star Wars Trivia/Bar Crawl/etc. @ South Street Area | Wednesday & Thursday, December 13 & 14
Two days of events hosted by G33Kamania in anticipation of the release of The Last Jedi. Wednesday at the TLA: A screening of 2015’s The Force Awakens, plus trivia and burlesque by Scream Queen Holly Ween and MasoKiss. Thursday: South Street Bar Crawl. Starts at CopaBanana, then marches single file to hide its numbers. End up at South Street Cinema for a screening of the Star Wars Holiday Special. (Here’s some trivia: You spelled Wookiee wrong.)

Neil Hamburger @ Johnny Brenda’s | Thursday, December 14
The hilariously awkward and uniquely terrible comedian will perform two shows; tickets are still available for the late one. You may know Mr. Hamburger’s alter-ego “Greg Turkington” from the On Cinema web series or Adult Swim’s Decker, but this is nothing like that. His material is not for the moderately offendable:

Orny Adams @ Helium | Thursday-Saturday, December 14-16
Kids today know Orny Adams from his recurring role on the Teen Wolf TV series, but oldheads will remember the 2002 documentary Comedian that chronicled his early days in the biz.

Cinemaps @ PhilaMOCA | Sunday, December 17
Authors Andrew DeGraff and A.D. Jameson show off their stylish new book, Cinemaps: An Atlas of 35 Great Movies, which features essays and hand-painted maps that obsessively detail the locations in movies like Back to the Future, King Kong, Raiders of the Lost Ark and The Shining. They are dazzling. Doogie Horner hosts.

Josh Gondelman @ Helium | Sunday, December 17
The NYC comedian is a writer on Last Week Tonight with John Oliver and has appeared on Conan and Night Train With Wyatt Cenac. (P.S. Back in the day (like just a couple years ago), he co-created the Modern Seinfeld Twitter account.)