REVIEW: In InterAct’s Broken Stones, A Political Tale Goes Down the Rabbit Hole 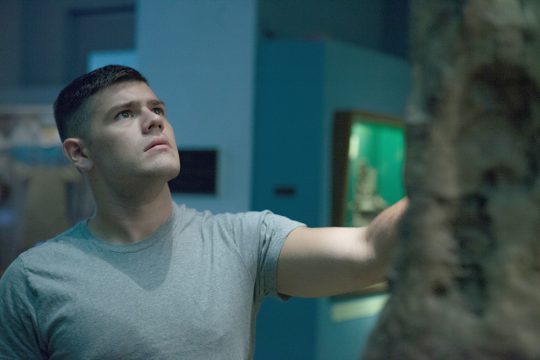 Sinister political thriller? Caper comedy? Morality play? Surreal fantasia? Try as I did to focus on the odd and occasionally intriguing narrative arc of Broken Stones, I kept getting waylaid. The tone shifts so often and so radically that I could barely keep up.

Still, I think I can capture the basics. Ramirez, a soldier in Iraq (played by Rand Guerrero) was involved in an operation wherein many priceless museum holdings were looted—the most precious among them, stone tablets recounting the Epic of Gilgamesh. (You may pause now and open a Google search tab.) Wanting to tell his side of the story, Ramirez hooks up with a high-powered ghost writer (Charlotte Northeast, distinctive and compelling, as always). What she wants to do is slant the story for maximum commercial appeal—facts be damned.

But those facts—or really anything cohesive—are hard to come by in Broken Stones. Perhaps more accurately, they are nearly undetectable in the overload of ideas. Some are clever (a show-bizzy reenactment of the museum story), others not so much. Some are original; others borrowed (from Pirandello, for one).

Near the end of Act I, we finally hit the plot motherlode—specifically, that “blood antiquities,” trafficked by Iraqi insurgents, are ultimately bought by wealthy American collectors (I probably don’t need to explain the irony). Aha!, I thought—now this is the play. But rather than clarify the action, Act II adds additional obfuscating layers. There’s an element of mystery to the story of Broken Stones; but the bigger one is why a theater would agree to do this piece without first getting major revisions and cuts.

I don’t envy the eight-actor cast, who not only play multiple roles, but also need to find a new style for every change in genre. Steven Wright and Daniel Barland negotiate this best (the latter is saddled with briefly having to play a ghastly gay cliché—think Will & Grace without the wit—but is otherwise very winning). In the central role of the officer whose story Broken Stones ostensibly is, Guerrero looks perpetually confused. (I don’t blame him.)

Stretches of the show are entertaining, and there’s some imaginative staging by director Seth Rozin, who moves the play along fluidly (no easy feat). Who knows? You may enjoy Broken Stones a lot more than I did. If you decide to go (this isn’t a recommendation, mind you, but if you do), try thinking of it is a theatrical “Where’s Waldo?” There’s a play here, somewhere. Good luck finding it.