THEATRE REVIEW: In Making History, What Happened Vs. What’s Remembered

The talent of Philadelphia’s Irish Heritage Theatre continues to impress. 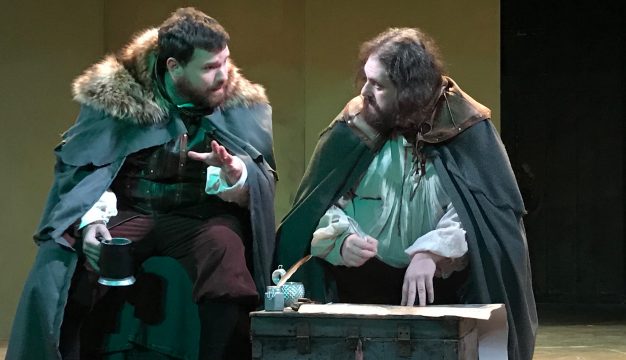 Brian Friel, who died in 2015, was for more than 40 years one of our most prolific playwrights; also one of our best. Yet, although many of his works have been staged in New York, they are not seen enough in American regional theater. Some of this is cultural—Friel, who was Irish and wrote very specifically about his country, may be considered far afield for American audiences.

But as this fine production of Making History reminds us, Friel’s plays have relevance beyond their own world and time. We’re fortunate to have such strong advocates in the Irish Heritage Theatre.

The setting here is around 1601, framed by the Siege of Kinsale, a tide-turning episode in the Nine Years’ War. The key players, drawn from history, are Hugh O’Neill, the Earl of Tyrone (played by Ethan Lipkin), a larger-than-life figure whose allegiances changed over time; and Hugh O’Donnell, the Earl of Tryconnell (Kevin Rodden), a charismatic leader, always ready for battle.

I assume much of this story would be familiar to Irish audiences—perhaps also to history buffs. It wasn’t known to me, but a quick Wikipedia consultation made it easy to follow. Don’t worry too much about it—although strategizing and battles form the narrative arc (the two acts of Making History are referred to as Before Kinsale, and After Kinsale), Friel’s lovely play is more of character study… and most powerfully, an examination of how history—in remembrance, at least—is as much an act of constructed storytelling as it is factual reporting.

The metaphoric quality of Making History comes through strikingly in Peggy Mecham’s nuanced production. Irish Heritage Theatre has modest resources, but here that turns out to be a plus—the look of the show, achieved through a few good costumes and scenic pieces, suggests the austere beauty and color palette of a Rembrandt painting. 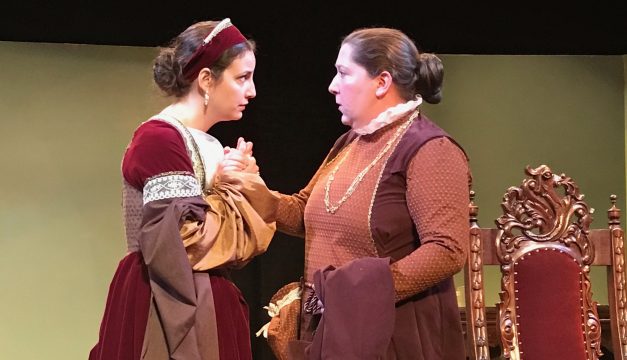 And the acting talent at Irish Heritage Theatre continues to impress. Lipkin’s Orson Welles-like physique is a powerful stage presence—but he’s equally effective in his quieter moments. Kevin Rodden has stage charm and energy to burn. And I was especially won over by John Cannon, playing a soft-spoken but wily old Bishop, whose job it is transcribe the events into the record. (Audiences of a certain age will no doubt notice how much Cannon resembles—in looks and manner—the wonderful old actor, Cecil Kellaway.)

There’s fine work also by the two female actors, Stephanie Iozzia, and Melissa Amilani. In fact, one of the most startling and modern touches in Friel’s play is the recognition that women, so often marginalized in retelling old war histories, are in fact so central.

Making History, a talky play, gets stronger as it goes along. By the end, I was convinced that Friel is deliberately paying homage to George Bernard Shaw’s Saint Joan, another play where the central question is not simply what happened… but how decades and centuries later, it will be recalled. (The final scenes of both plays—set in a later time—are strikingly similar.)   Having seen the terrific work Mecham and company are doing with Friel, I fervently hope they will someday do Saint Joan. I mean it as the highest compliment when I say they have the actors for it.