Should we place bets on what time Lauryn Hill will show up? Twin Peaks @ Union Transfer | Friday, August 26
Chicago’s Twin Peaks are playing a free show at Union Transfer as part of the Brooklyn Brewery Mash, a traveling beer-centric festival visiting Philly this weekend. You’ll be listening to the band – they’re garage rock, with a sound that calls back to the ’60s: Echo and reverb with a touch of R&B influence — while drinking “Brooklyn Brewery’s most sought-after and hard-to-find beers.” Sounds like a pretty decent combo to me. The Philly Mash concert openers are locals TJ Kong and the Atomic Bomb and Palmas. You have to RSVP.

Keith Urban @ BB&T Pavilion | Friday, August 26
American Idol judge and Nicole Kidman husband returns to Philly on his Ripcord World Tour, named for his ninth studio album. The first single off it, “John Cougar, John Deere, John 3:16,” is sure to get your cowboy boots a-tappin’.

Ja Rule and Ashanti @ Electric Factory | Friday, August 26
Ja Rule and Ashanti go together so well, don’t they? Both are releasing albums this year, but Ja says this will be his last record — he’ll be focusing on acting instead. So this might be your last chance to see him for a while.

Carsie Blanton @ Boot & Saddle | Saturday, August 27
Singer-songwriter Carsie Blanton is based out of New Orleans and you can hear the city in her upbeat, jazzy music, backing a sweet-but-rich voice.

Lauryn Hill @ Mann Center | Saturday, August 27
If you’ve loved Ms. Hill since her Miseducation, head to the Mann for the first stop on her MLH Caravan: A Diaspora Calling! concert series. Several guests will join Hill along the way; in Philly Trinidadian soca singer Machel Montano shares the stage. She’s notoriously tardy, but I am prepared to wait all night. 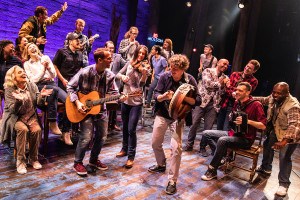