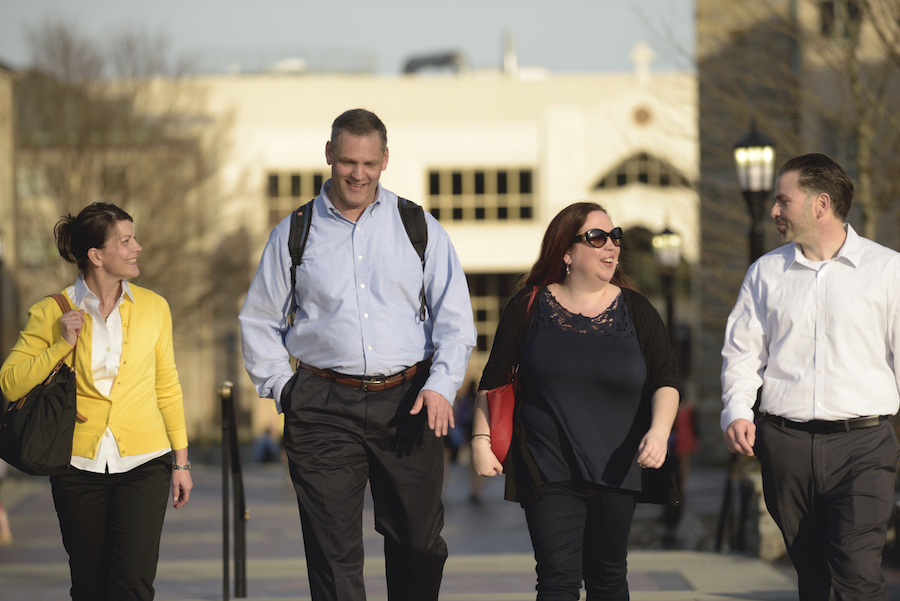 As an undergraduate student at Villanova University, John Weinberger takes a full course load, hosts a student radio show and plans to study abroad in Ireland next year. He’s also 54 years old. Despite college’s teenage associations, post-traditional learners — those typically 25 years and older — comprise close to 60% of enrolled undergraduates, according to the American Council on Education.

Four years ago, the Navy veteran lost his job during a particularly difficult experience with post-traumatic stress disorder. At the encouragement of his former shipmates, the Norristown resident made the decision to go back to school through a Veterans Affairs program. He’s currently studying information systems and cybersecurity at Villanova University’s College of Professional Studies.

“All my research indicated that there’s going to be double-digit growth projections for that industry for the next two decades,” he says. Knowing the strength of the Villanova name and alumni network, “it was pretty much an easy choice at that point.”

Outside of his classes, Weinberger found additional opportunities to build his skillset in preparation for reentering the workforce. He hosts a classic rock show on WXVU to improve his public speaking abilities. He selected his study-abroad program — a first for a CPS student — at the University College of Dublin so he could gain additional exposure to blockchain security and build his résumé. “That’s the up-and-coming security measure for communications or data preservation and privacy,” he says. “It’s definitely going to carry some weight when I go looking for a job.”

Weinberger knows that he’s not the stereotypical college student, especially since he’s older than some of his professors, but feels grateful for the opportunity to enter a growing field. “Not a lot of people get a second chance on life,” he says. “That’s basically what I’ve been handed.”

Nick Langan, another Villanova College of Professional Studies student, feels the same way.  “To have this second lease on life is just incredibly valuable,” he states. The 34-year-old is also studying information systems, but with a minor in communications.

After a challenging experience at college in his 20s, the former IT operations director has experienced a world of a difference reentering the classroom as an older adult — so much so that he now wants to pursue a master’s degree. “The work ethic I was able to build in my full-time job that I’m able to apply now — versus my first time in college — it’s night and day,” the Tabernacle, New Jersey, resident says.

Like Weinberger, Langan has found his own space on campus through involvement with the student radio, a job with the engineering department and induction into Alpha Sigma Lambda, a national honor society for non-traditional students.

After diving into the college experience headfirst, both students agree other adults should jump at the chance if possible. “Don’t be afraid to take the first step,” Weinberger advises. “Have a goal and be focused on that goal and everything else kind of falls into place.”

Take the next step by completing your degree at the Villanova University College of Professional Studies.

SPONSOR CONTENT Return to Class Without Leaving Your Life: How These Adult Students are Navigating Higher Ed

SPONSOR CONTENT Looking for an Innovative Way You Can Help Migrants and Refugees?