The Weekly Five: An Eagles Season Recap—What Went Wrong? Plus: Why the Chiefs Will Win the Super Bowl 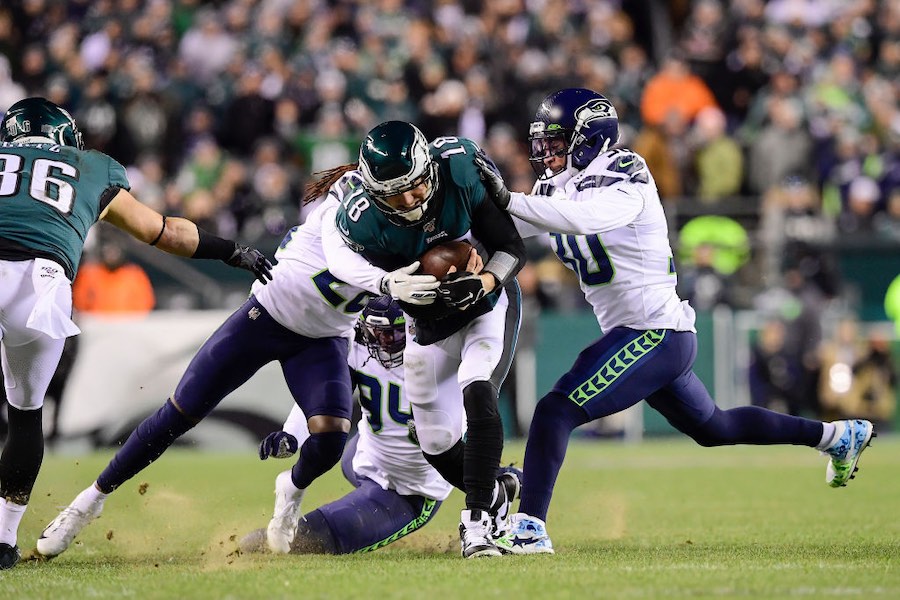 Katie Kohler is an award-winning journalist with more than two decades of experience covering suburban Philadelphia. She still has Super Bowl LII, Action News post-game, and the Super Bowl parade on her DVR, and watches them at least twice a month. When not busy sending angry tweets during games, the lifelong Eagles fan will contribute insight and NFL betting trends throughout the season.

Clearly, something went wrong. What adjustments do the Eagles need to make during the offseason?

The Eagles need to surround Carson Wentz with weapons and improve their secondary. The practice squad storyline was cute, but it was far from ideal. The Eagles can’t waste Wentz’s prime by failing to identify playmakers. Is it going to be Alshon Jeffery and DeSean Jackson? Or will GM Howie Roseman work his magic and make moves to acquire (younger) talent at wide receiver?

The Birds also need to make decisions about their secondary, which was exposed throughout the season. Upcoming unrestricted free agents include Rodney McLeod, Jalen Mills and Ronald Darby. And let’s not forget: 32-year-old Malcolm Jenkins isn’t happy with his contract.

Even if the Eagles had won on Sunday, what would their chances of winning the Super Bowl looked like?

Slim. It’s doubtful Wentz would have cleared concussion protocol. The injuries were simply too much for this team to overcome. Despite a valiant effort with injured ribs and a lacerated kidney, Zach Ertz was clearly limited. Sooner or later, the clock was going to strike midnight on this band of walking wounded. The seemingly non-stop injuries were the story and wrote the ending of this season. Eagles fans can wonder “what if,” but the Eagles brass needs to examine why so many injuries occurred and what, if anything, can be done to prevent them.

Hypothetically, if a Josh McCown-led Eagles team beat the Packers and Aaron Rodgers at Lambeau, Philadelphia fans would have built a shrine to him made of “double-doink” t-shirts and Jeff Garcia bobbleheads.

The Kansas City Chiefs. With those pesky New England Patriots eliminated, it’s Andy Reid’s best chance to advance. The Chiefs offense averages 6.3 yards-per-play and is equipped to handle Lamar Jackson and the Baltimore Ravens in an AFC Championship shootout. Jackson gets the hype, but Patrick Mahomes is the reigning MVP and has thrown for more than 4,000 yards and 26 TDs this season.

There is a chance it could come down to defense, though. The Chiefs’ awful defense from last season has dramatically improved, and Reid’s squad has given up just 19 ppg.

The Vikings, though oddsmakers don’t necessarily agree; Minnesota will face the San Francisco 49ers as 6.5-point underdogs. But it’s hard not to see an uptick in their stock since they went into the Superdome and beat the New Orleans Saints. Going into Wild Card Weekend, the Saints had the fourth-best odds to win the Super Bowl. The Vikings’ offensive firepower is well-documented, but keep in mind their defense only gave up 18.9 ppg- fifth lowest in the league.

The Vikings weren’t given much of a chance by bettors or pundits to beat the Saints, and it will be the same story this week. All the pressure is on the top-seeded 49ers and quarterback Jimmy Garoppolo, who is making his first postseason start.

What’s the most interesting thing you can bet on this week in the NFL?

Will there be overtime? If Wild Card Weekend was any indication, these games are going to be close. Two of the four games went to OT, and all of them were decided by less than eight points.

However, don’t expect a repeat of all the games going “under.” Especially the Tennessee Titans vs. Baltimore Ravens. Ten of the Titans’ games went “over” and nine of the Ravens’ went “over.” As of Monday, the over-under for Titans vs. Ravens is 46.5.

During Wild Card weekend, roughly 16 percent of bettors picked the Minnesota Vikings on the moneyline. Don’t be shy about fading the public if there is an underdog you love.