This nicely updated 1750 trinity has its kitchen in a familiar place, but then it goes even deeper. 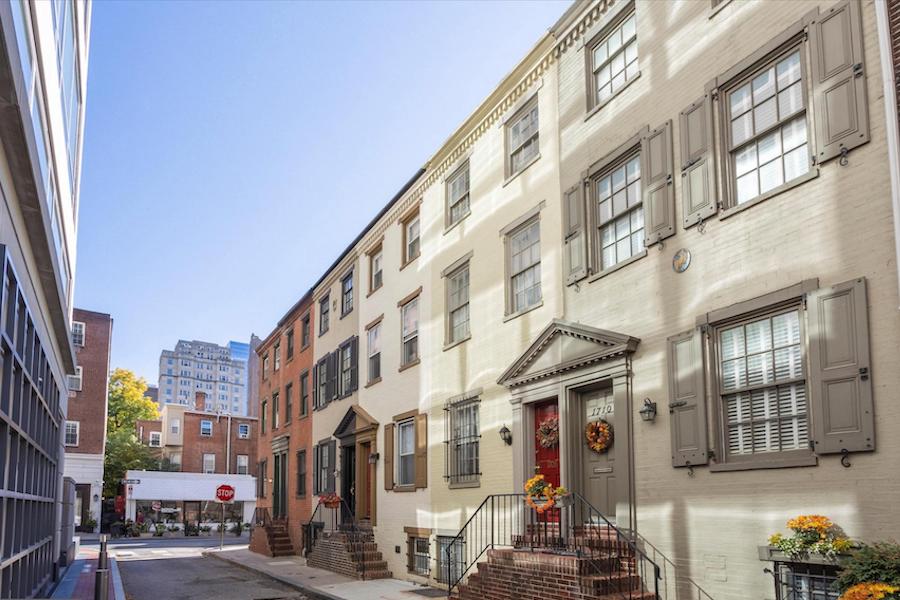 According to the property data, cows grazed on Rittenhouse Square around the time this classic trinity (second from right) at 1708 Rodman St., Philadelphia, PA 19103 was built. Both the square and this unusual five-floor trinity have changed since then, in both cases for the better. / Bright MLS images via Elfant Wissahickon Realtors; some rooms virtually staged

The agent marketing this handsome Rittenhouse Square classic trinity house for sale refers to it in the listing copy as a “quadrinity,” counting its partly sunken kitchen as a fourth floor.

And even though it’s partly below ground, the kitchen’s square footage counts towards the above-ground square footage of this spacious traditional trinity. And that’s because the kitchen isn’t in the basement.

The lower-level kitchen is one of the standard ways classic trinities accommodate kitchens. But this house also has a full unfinished basement below the kitchen. There you will find the laundry, and it also offers you space to stash your stuff. That’s the real plus-one that makes this trinity unusual.

So since I’ve started at the bottom of this house, I’ll continue working my way up from it. 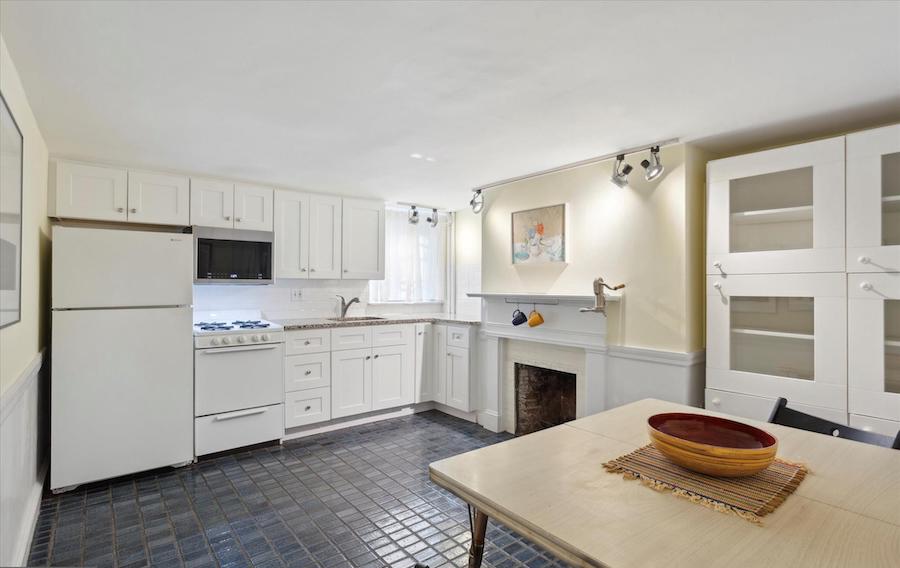 Which brings us to that kitchen. Since it’s only partly buried, it has sizable windows on two sides that let natural light in. And as you can see, it’s big enough to accommodate a decent-sized dining table, pantry as well as storage space, up-to-date appliances and a purely decorative fireplace. 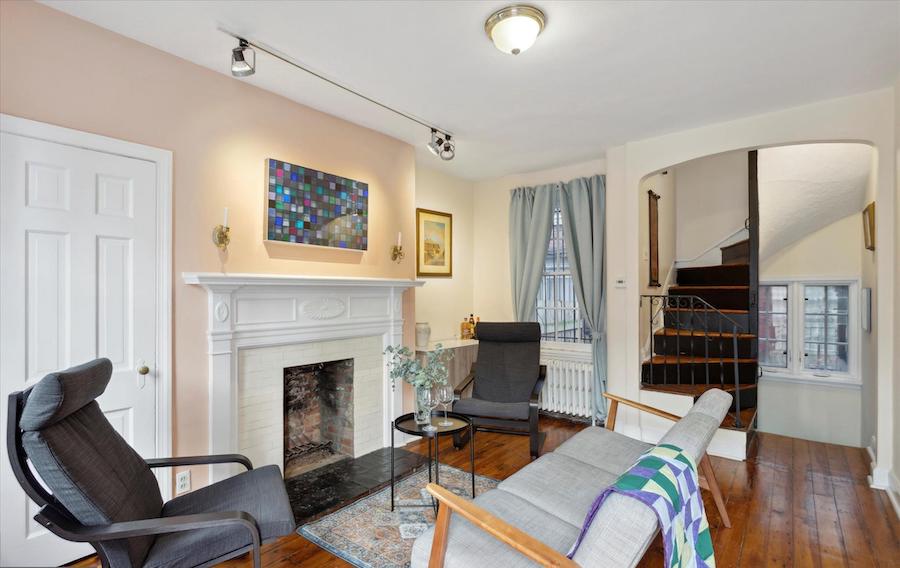 The fireplace in the living room, on the other hand, still functions. Given this house’s age, chances are it also had fireplaces on the upper two floors, but those have been removed. 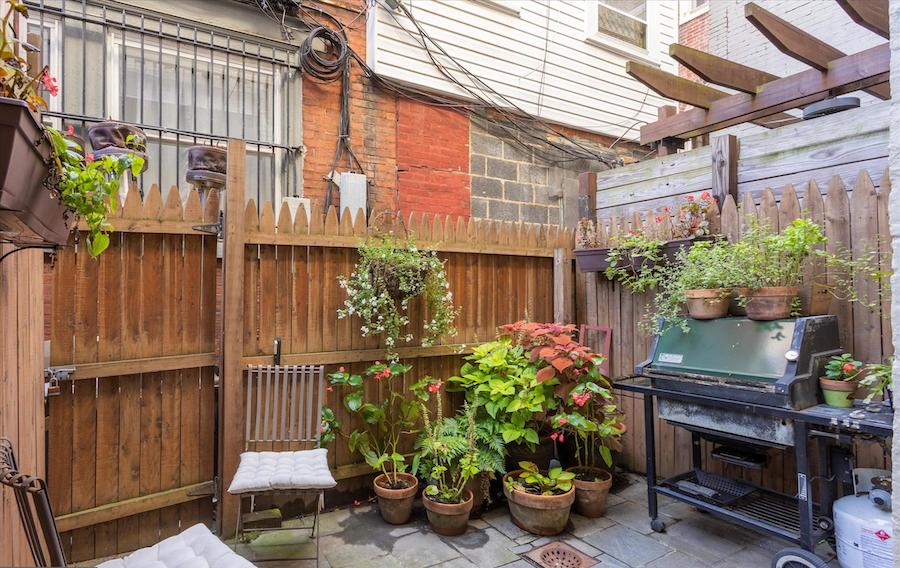 In between the kitchen and the living room floors, the rear door from the trinity staircase leads to this attractive and unusually roomy (for a trinity lot) rear patio with tile pavers. 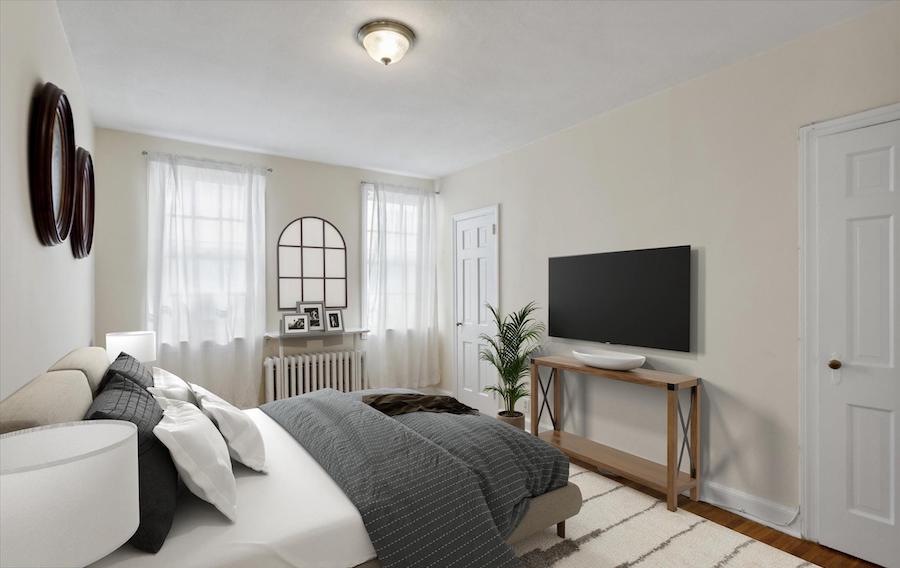 One floor up from the living room sits the first of this trinity’s two bedrooms. Both bedrooms have ample closet space. 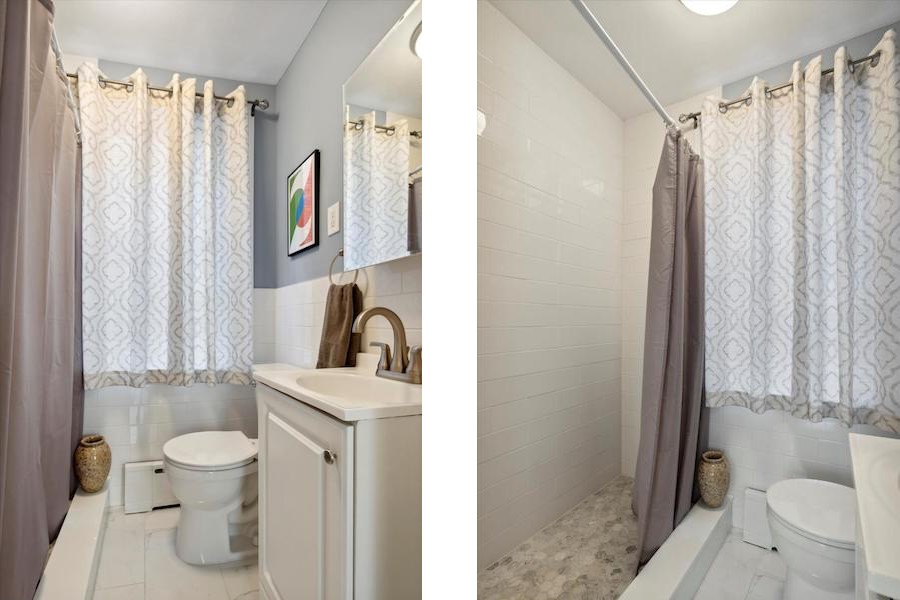 The house’s full bathroom is also located on this floor. Instead of a tub/shower combo, it has a full-size shower stall. 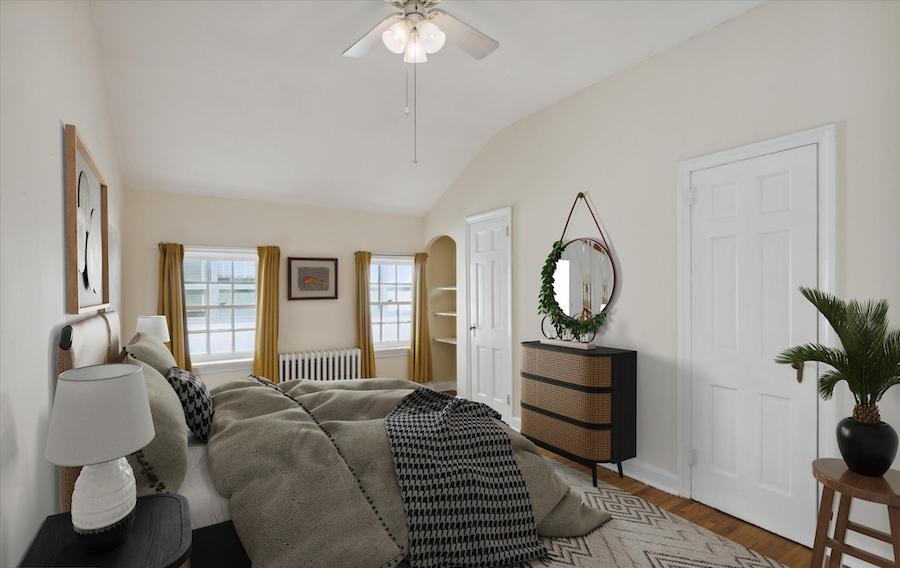 The primary bedroom on the top floor also has built-in bookshelves next to one of its closets. A powder room means that you only have to use the downstairs bathroom when it’s time for you to shower.

And if you want to live car-free, you’ll be hard-pressed to find a trinity better situated than this Rittenhouse Square classic trinity house for sale. Its Walk Score and Transit Score are both 100, and it has an 89 Bike Score to boot. And there are plenty of places to walk to around it: The South Street West restaurant row. Rittenhouse Square itself. The Avenue of the Arts and its cultural attractions. Neighborhood shopping and dining on South 20th Street. And even more shopping, dining and entertainment options along Rittenhouse Row.

As the listing agent also says, “The house has everything you need, except for the HOA fees of all the nearby condos.” Given that it has five floors to hold everything, this sounds about right.