On the Market: Eurostyle Townhouse in New Hope

Norman on the outside, Bauhaus on the inside, this townhouse next to the Delaware Canal is a real stunner. 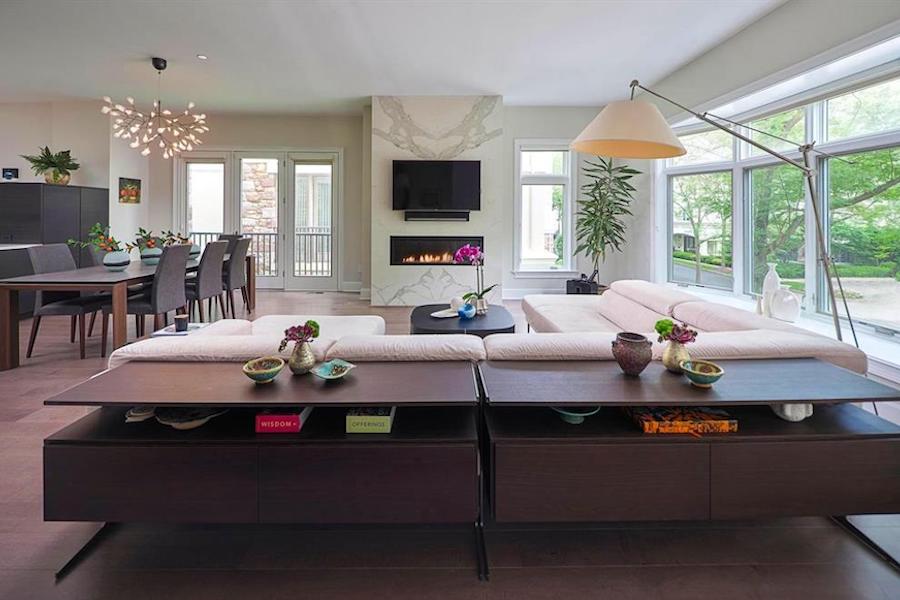 Clearly, the owners who rebuilt this townhouse at 523 Waterview Pl., New Hope, PA 18938 are modern lovers, for they turned its main floor into a Eurostyle work of art. But they did leave some reminders of its past intact here and there. | Bright MLS images via Addison Wolfe Real Estate

Since it was completed in 2002, Waterview Place has become one of the most popular luxury developments in New Hope. And with good reason:  It sits between the Delaware Canal and the Delaware River at the south edge of town, close enough that you can walk to its shops, restaurants, clubs and theaters, yet far enough away that you don’t have to hear the sound of the nonstop party. 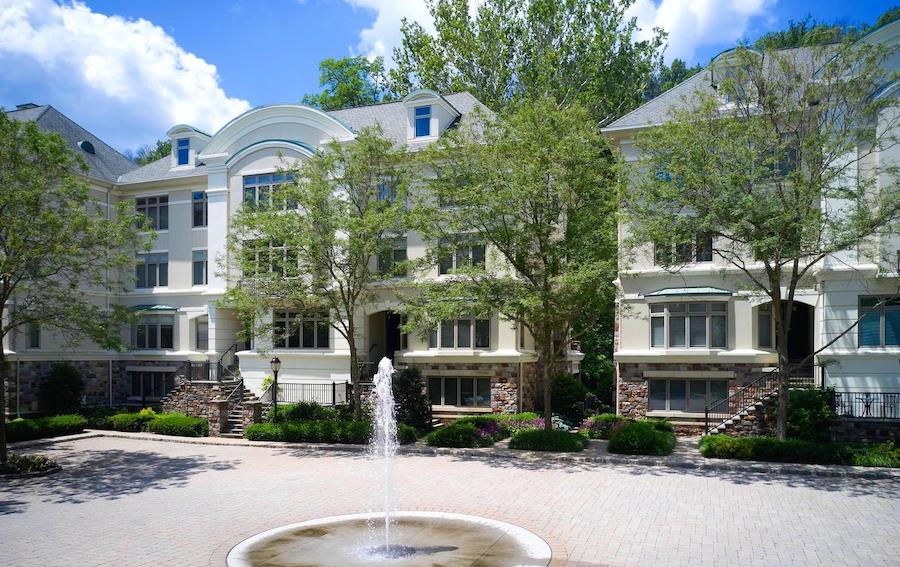 Building exterior with this unit in the center

And in keeping with the style of most luxury developments in this region, Waterview Place’s clustered townhouses take their cues from 18th- and 19th-century Europe.  In this case, 18th-century France.

And in most cases, the townhouses and flats in Waterview Place also channel the 18th century on the inside. 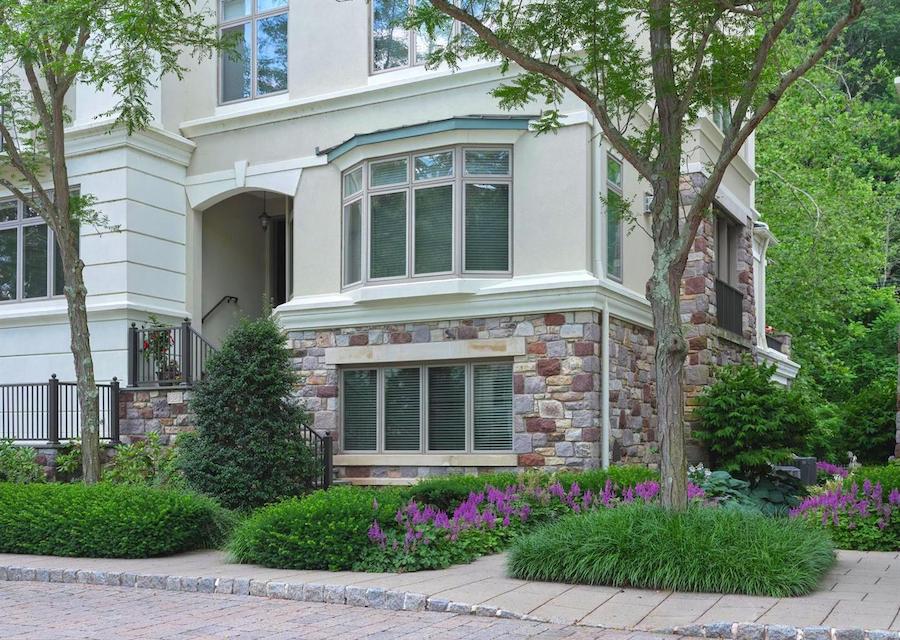 On the outside, this one-0f-a-kind New Hope condominium townhouse for sale looks just like all its neighbors.

But imagine what those neighbors would say once they stepped inside, for the photo at the top is what will greet them.

Clearly, the owners who gave this four-story end-unit townhouse a three-year total rebuild a few years ago march to the beat of a different drummer than most other Waterview Place residents, for what they have created on the inside is a très chic, ultra-stylish, super-sleek 21st-century European import.

Imported hardwood floors and marble abound in this residence, whose open main floor is filled with natural light through its many windows. On the other hand, there’s not a single crown molding or chair rail to be found anywhere in this space. 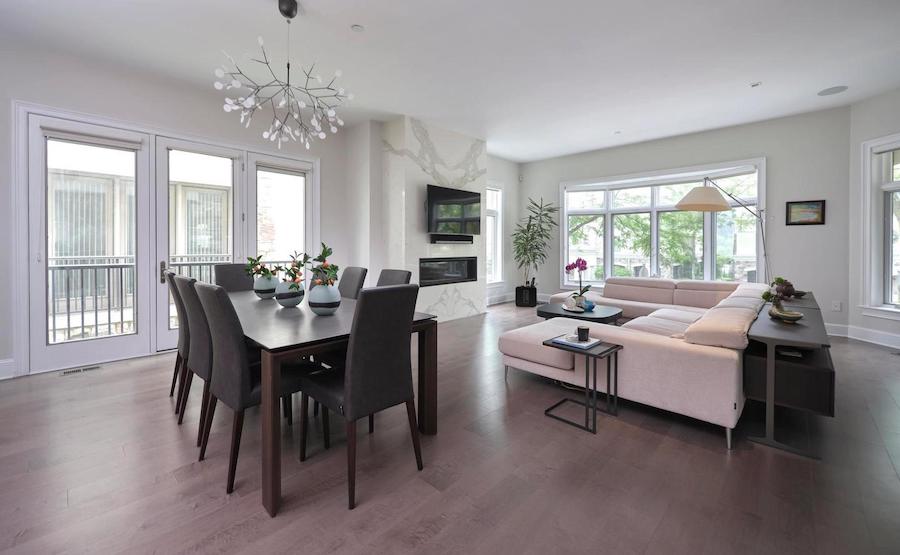 The living room has a gas fireplace with a marble surround and a large bay window looking out on the central courtyard. 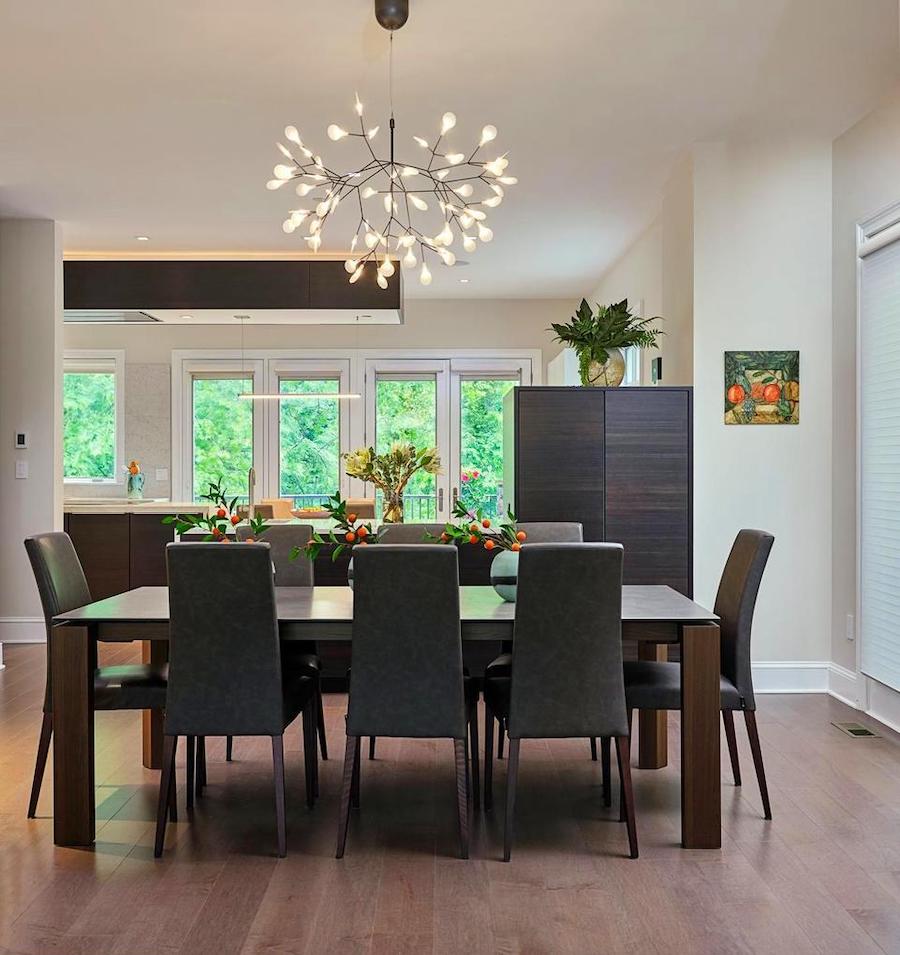 The dining area and its tree-like chandelier form the bridge between the living room and the kitchen and breakfast nook. A serving counter divides the two areas.

On the kitchen side, that bar contains a Miele espresso maker and a wine and beverage cooler. 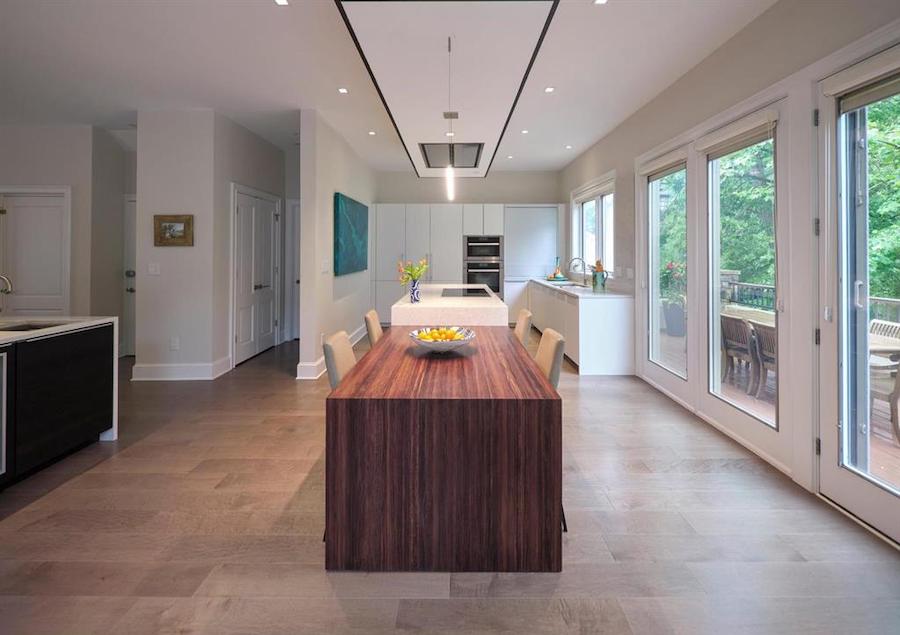 The casual dining table next to it is an extension of the island in this house’s stunner of a Poggenpohl kitchen. 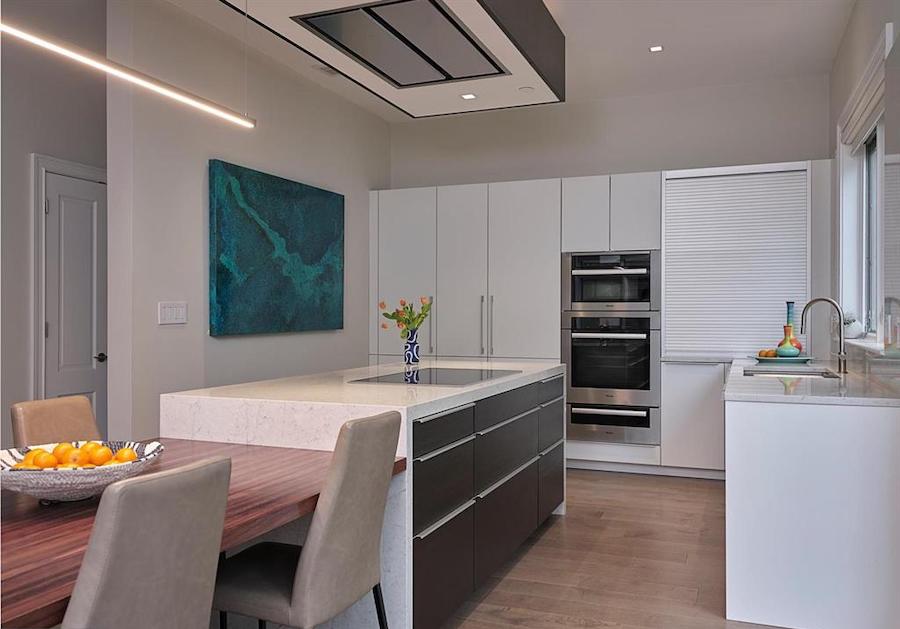 Said kitchen features Silestone quartz-topped counters and sleek modern cabinets. It also boasts top-drawer Miele appliances that include a smooth-top cooktop beneath the custom-designed soffit and vent hood. The oven, microwave and warming drawer are built into the far wall between two items that make this kitchen truly European: An appliance garage to their right and a Sub-Zero refrigerator-freezer to their left. (Can’t figure out which of those doors is the fridge?  Even more than the Miele appliances, this feature makes this kitchen very German. I didn’t even know Sub-Zero knew how to make refrigerators like this one.)

Double French doors lead from the kitchen and breakfast nook to the rear terrace over the two-car garage. The view from here is a lush, serene one of the canal. 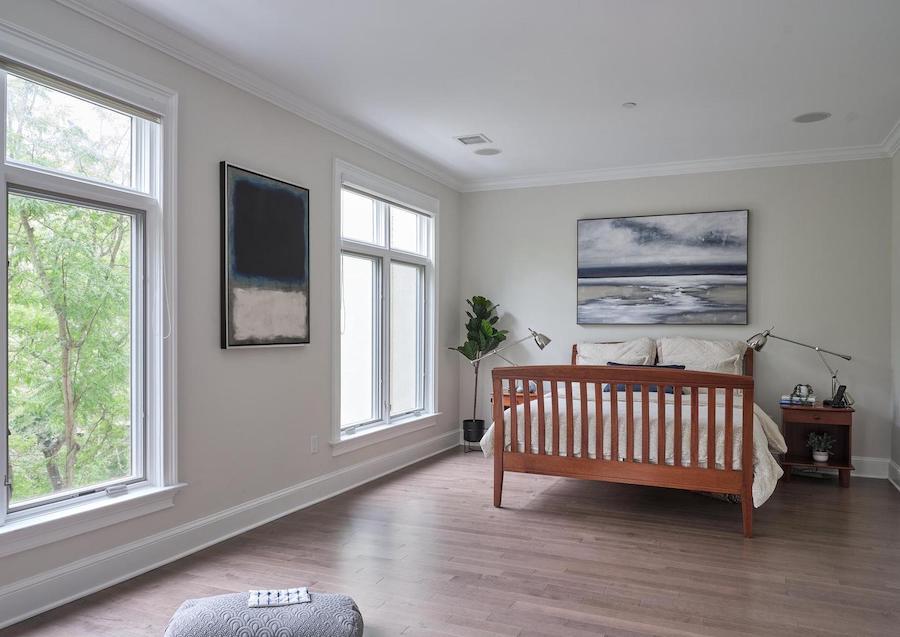 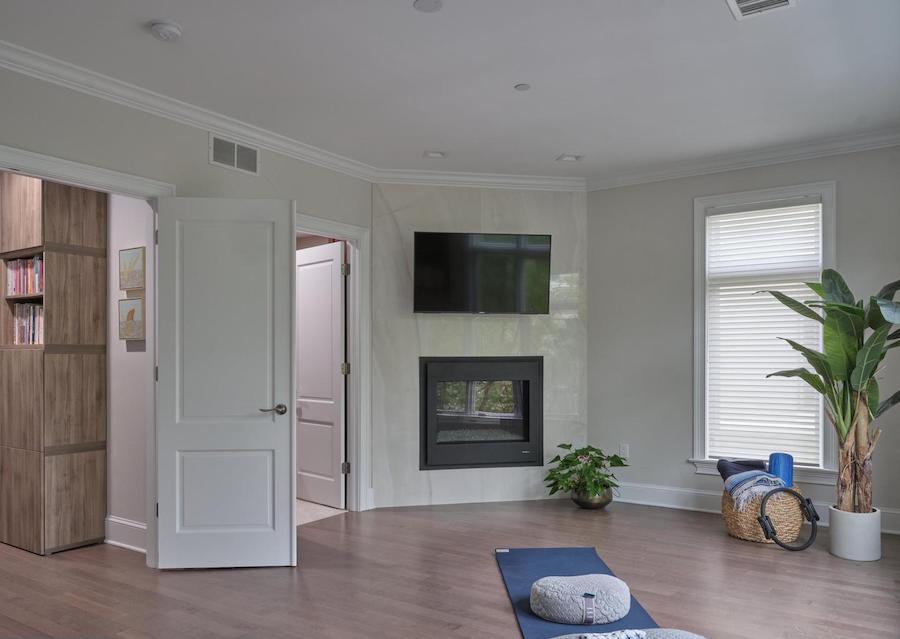 The upper-floor makeovers, on the other hand, leave intact some nods to this house’s original style. You will, for instance, find crown moldings in the primary bedroom, which also has a marble gas fireplace, huge windows and an equally huge walk-in closet. 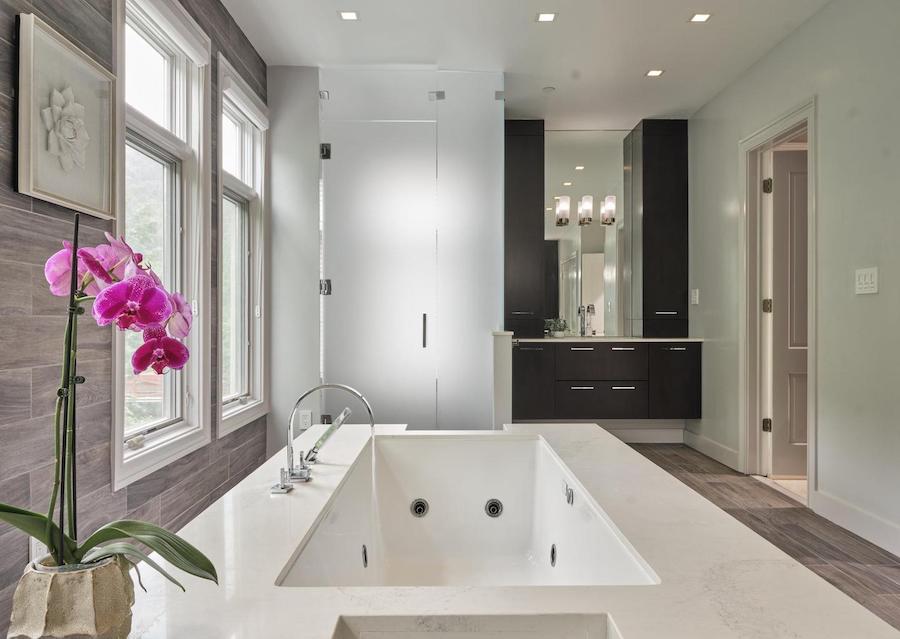 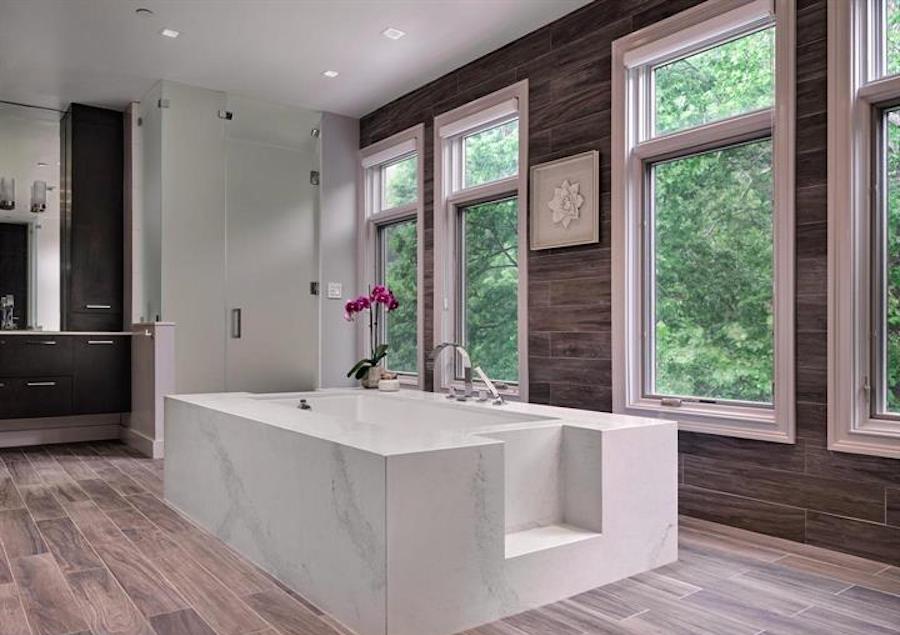 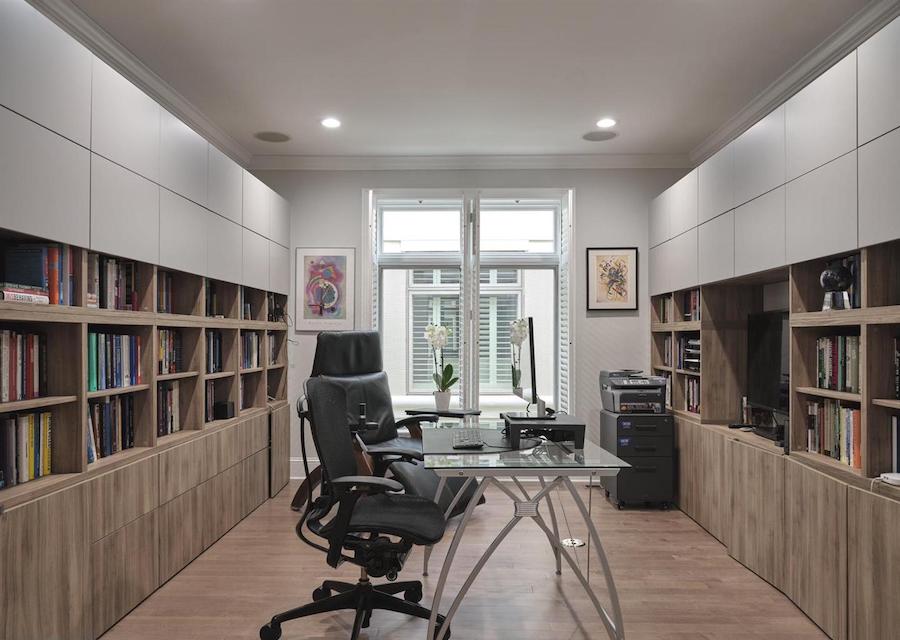 So is the home office on this floor, which is lined with custom built-in bookcases and storage units. (Well, almost — those crown moldings remain in this room as well.) 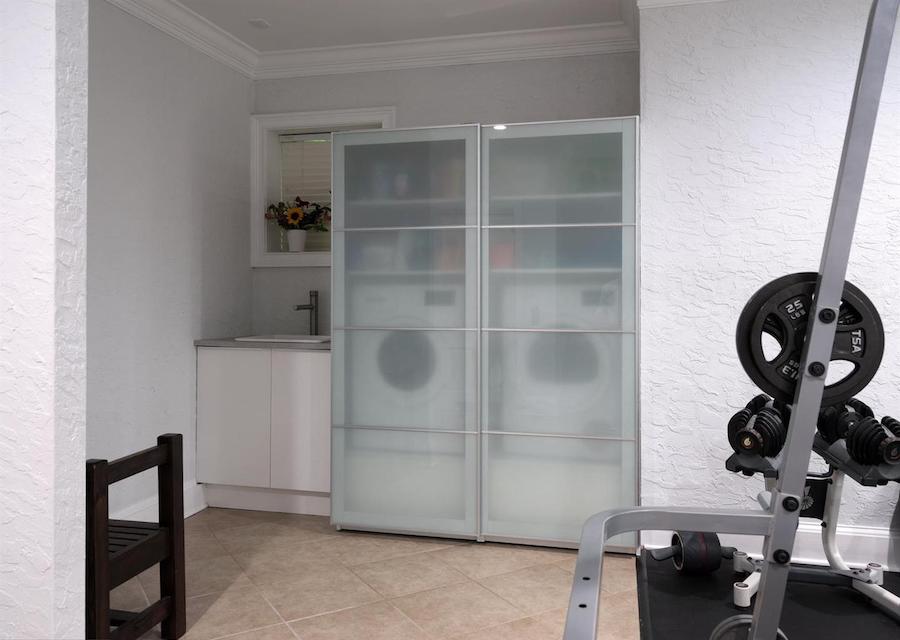 On the ground floor, next to the garage, a laundry room/home gym discreetly conceals its washer and dryer behind frosted-glass sliding doors.

One other item that retains its original appearance is the elevator serving all four floors.

But even with those little reminders that it once looked a lot more traditional, the overall impression this New Hope condominium townhouse for sale will leave on your guests is one of a Bauhaus-inspired masterpiece. They should be able to deal with the occasional cognitive dissonance very easily.

OTHER STUFF: An $852 per month condo fee covers maintenance of the common areas and building exteriors.