Noted artist Ray King is moving his studio, and his home and workshop can now become yours. 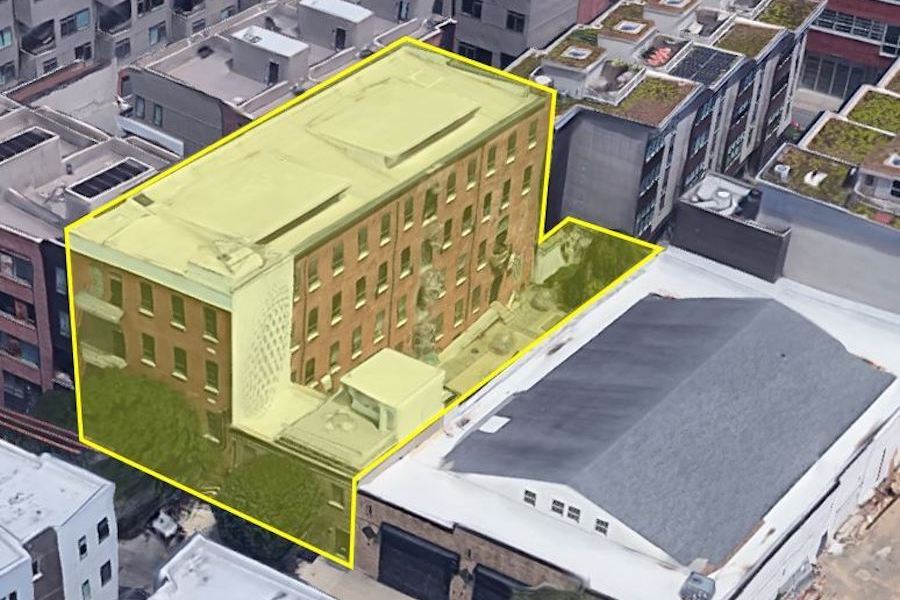 Since 1985, the two buildings shaded in yellow in the photo above have served as the residence and studio of noted Philadelphia sculptor Ray King. He is moving to a place where he can get materials delivered more easily, and that opens up a golden opportunity for anyone who has wanted a creative live-work space. The opportunity knocks at 823-29 N. 3rd St., Philadelphia, PA 19123 | LoopNet images via The Flynn Company

You know those iridescent columns that mark the southern gateway to the Avenue of the Arts at Broad Street and Washington Avenue?

You now have the opportunity to live and work in the place where these and a slew of other noteworthy sculptures were produced.

Artist Ray King, the sculptor of light, has called Philadelphia home since his birth here in 1950. After receiving a Louis C. Tiffany Fellowship to study the art of stained glass in Buckinghamshire, England, he has specialized in sculptures that use shapes and patterns found in nature to direct, bend and shape light to both alter the environment and explore the ways astronomers and others have used light to understand the universe for millennia.

King has produced his sculptures in this Northern Liberties studio and house for sale since buying the two lots from the Ortlieb brewery in 1984. Together, they offer a unique opportunity for anyone who wants to live where they work and needs lots of space to run their business. 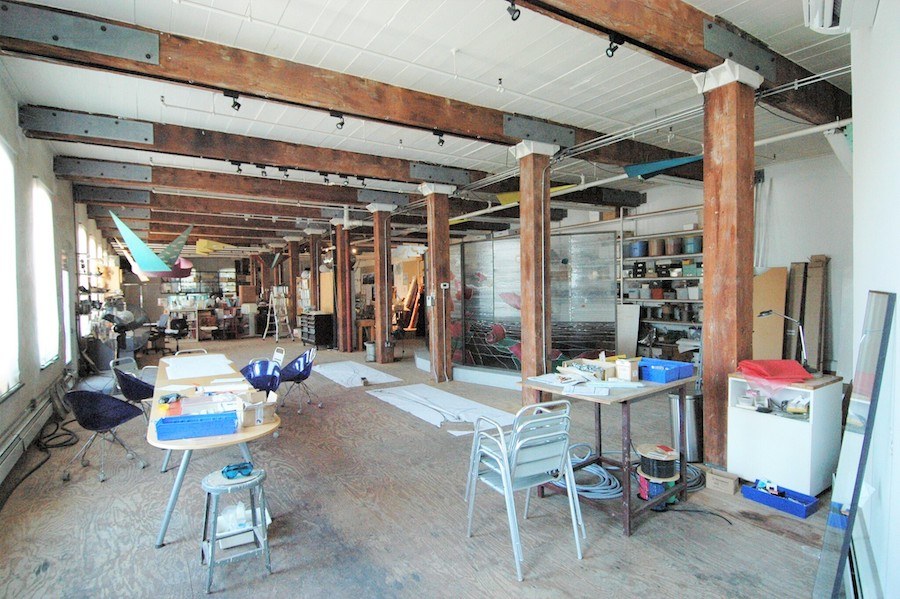 The factory building contains a total of 20,611 square feet of space in its four floors and two basements. As you can see from the photos, there are columns on each floor, but they leave plenty of clear space around them for making things. New clerestory windows added to the top floor allow natural light to pour into the space from above, and the building’s north wall was recently reinforced. 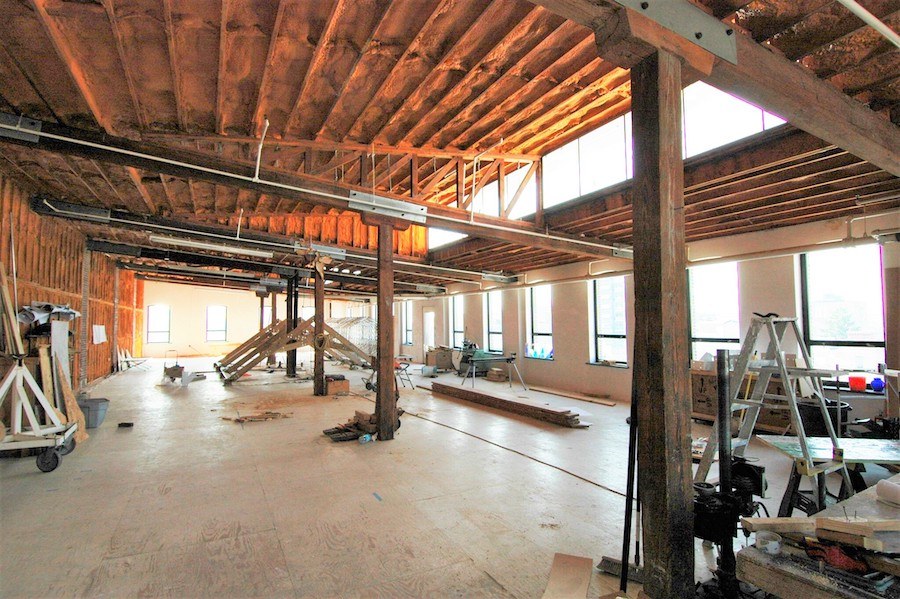 But fabrication isn’t the only thing you could do with this building. The lot’s IRMX (industrial-residential mixed-use) zoning allows for a wide range of commercial and light industrial uses. These uses include boutique hotels, adult or child day care, recording studios, restaurants, medical or other business offices, co-working facilities, indoor farms or gardens, social clubs and a slew of others. Including, of course, artists’ studios. The listing agents’ brochure gives you the complete rundown. 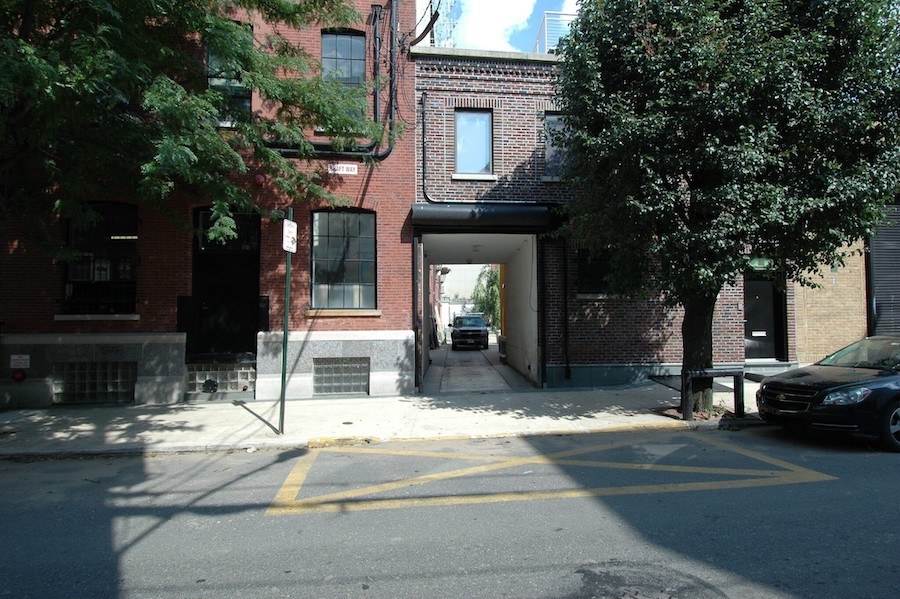 Next door to the circa-1915 factory building is a newer two-story structure with a roof deck, basement and large courtyard in back. 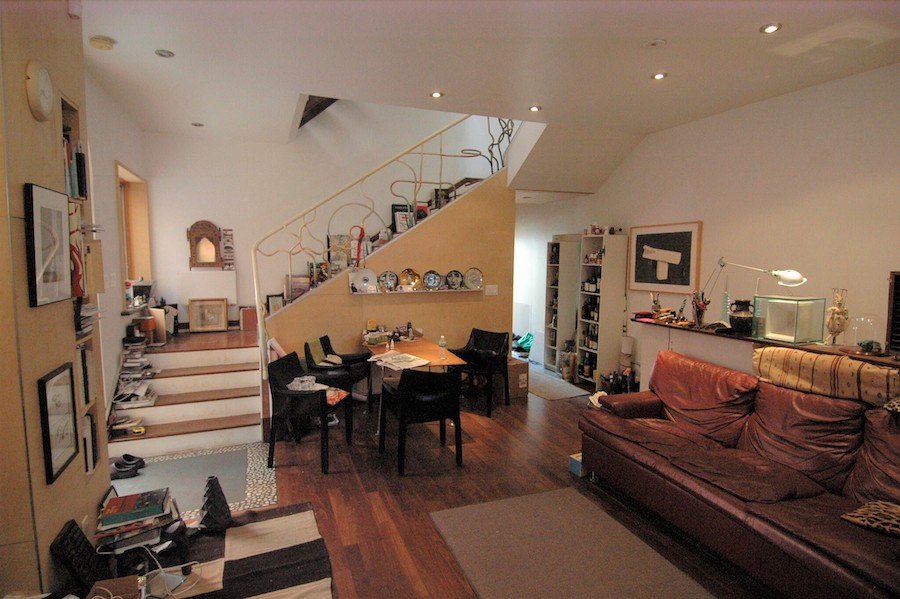 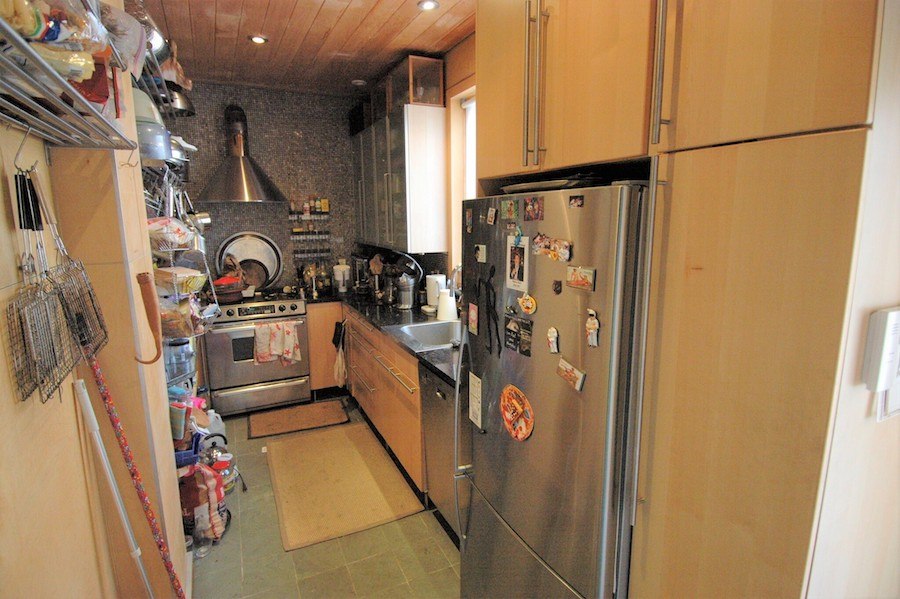 The residence has an open-plan living-dining room in front of the stairs on the main floor and a galley-style kitchen behind them. 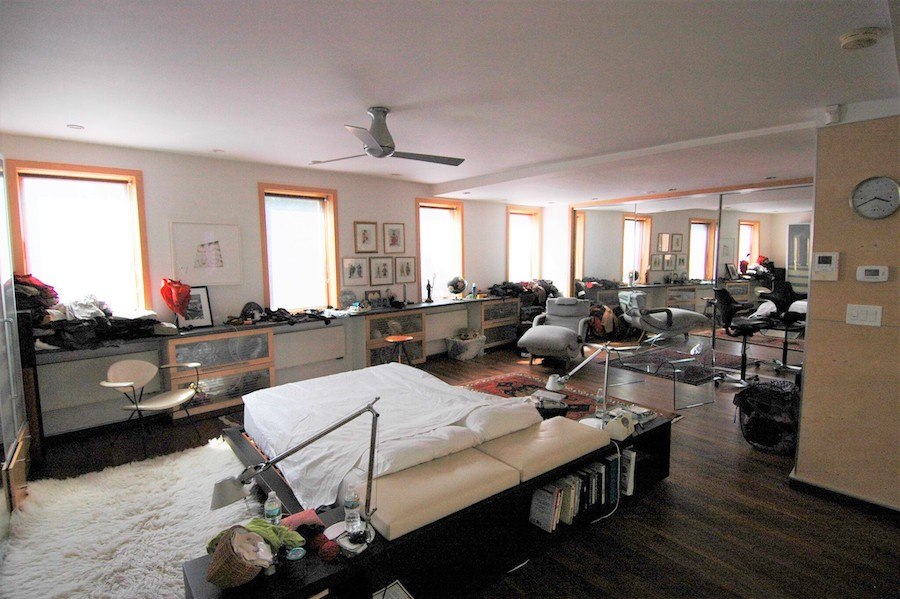 The upper floor consists of a single large bedroom in front of the stairs and a full bath behind them. 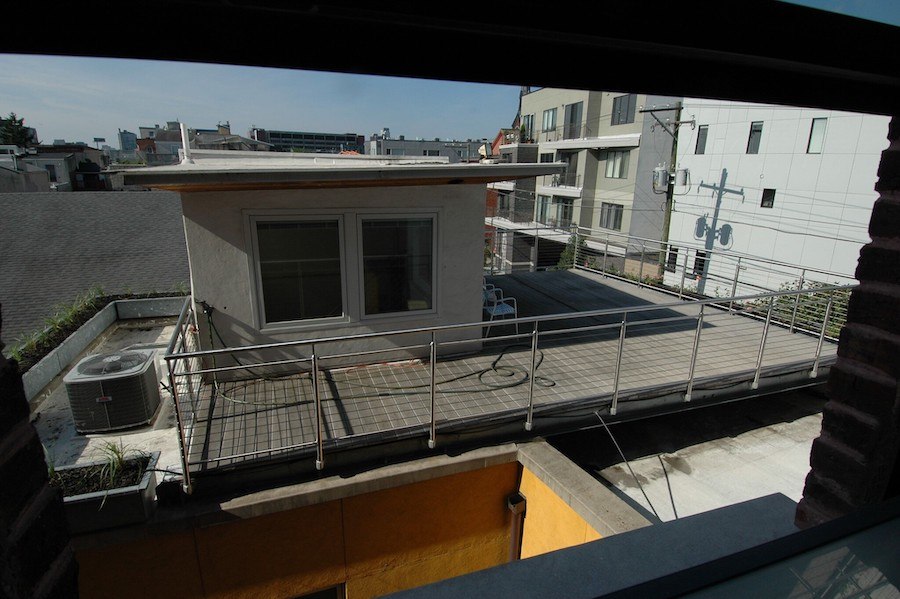 And atop it all is a roof deck with views of the surrounding neighborhood. 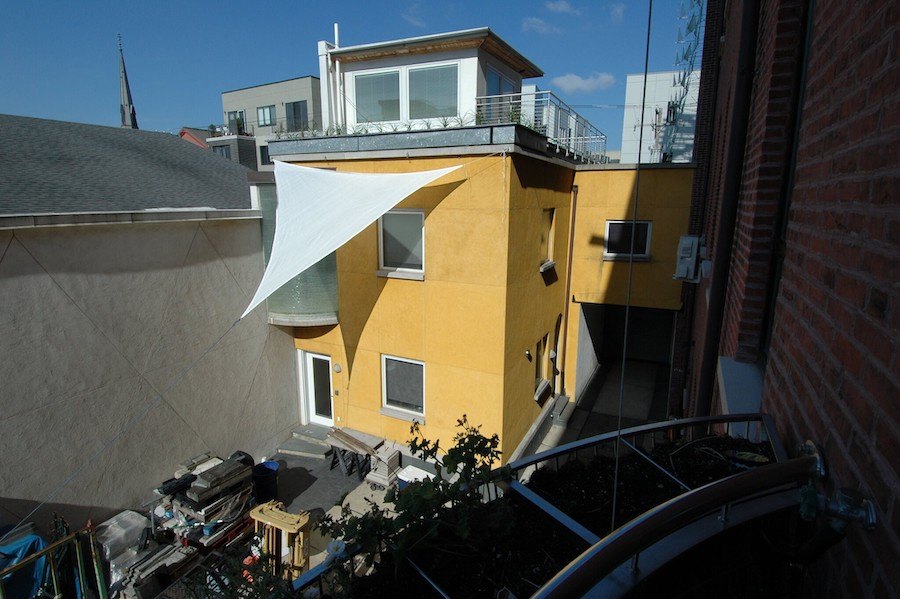 Rear exterior of residence and courtyard

A driveway protected by a roll-up gate leads to parking spaces and a nearly 3,200-square-foot landscaped courtyard with a fountain.

Not only do you get plenty of flexible space for living and working, you also get a convenient location. Popular local bar and restaurant North 3rd is just steps south of here and both Ortlieb’s and Liberty Lands Park are just steps to the north. Dozens of stores, restaurants and bars line North Second Street to the east, and you’re also close to the Piazza, Liberties Walk, more neighborhood shopping, two supermarkets, two Market-Frankford Line stations and two other SEPTA transit lines.

And if you decide to buy this Northern Liberties studio and house for sale, you have the option of acquiring one of King’s sculptures for yourself: this one, attached to the factory’s south wall. 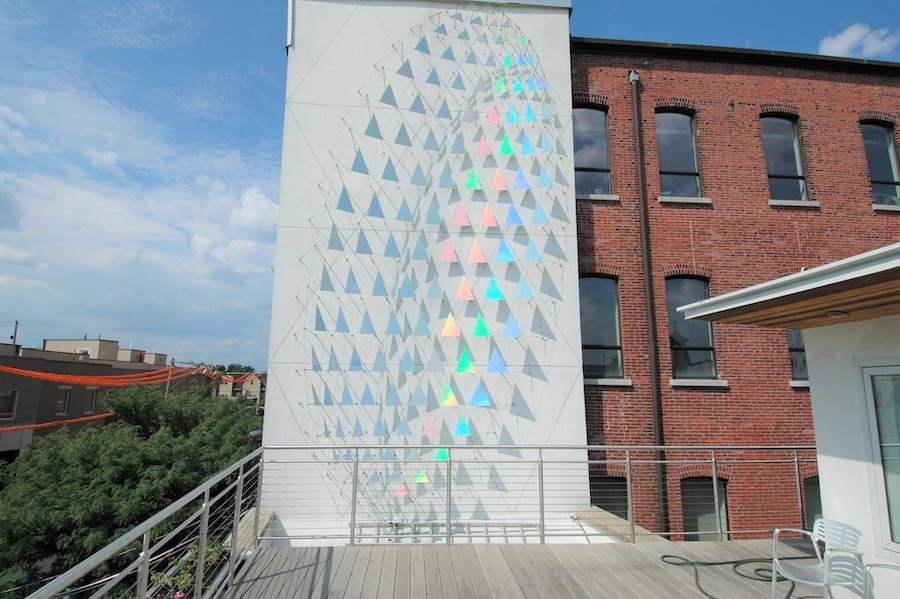 Titled Hello David, the 30-foot-high holographic sculpture is angled to face due south (the city’s grid is actually tilted five degrees to the east of true north). The work is an homage to astronomer and mathematician David Rittenhouse, who discovered the light diffraction gratings that make King’s holographic films possible all the way back in 1785.

Hello David comes with the property, but if, for whatever reason, whomever buys this one-of-a-kind property decides they don’t want it, King will remove it and take it with him.

But why would you want to do that, anyway? It’s not that often that you get a chance to buy an original work of art by a world-renowned sculptor just by buying a building.

OTHER STUFF: King has also produced a movable 3-D cutaway rendering of the house and studio.