On the Market: Carriage House and Maker Space in Spring Garden

A noted artist turned this 170-year-old carriage house into a home and workplace 20 years ago. It’s now a blank canvas on which you can paint your dreams. 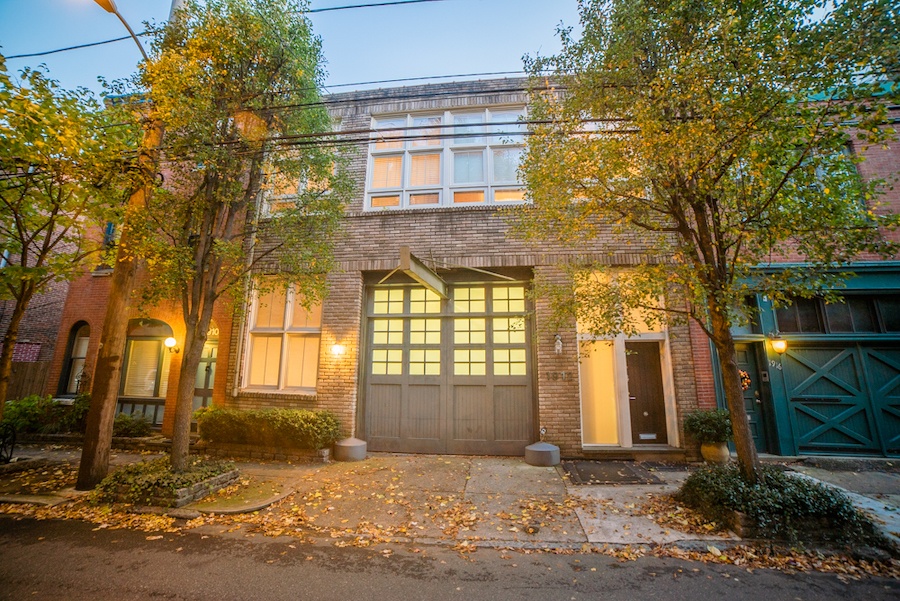 Close to both the Community College of Philadelphia and the Philadelphia Museum of Art, this carriage house in Spring Garden at 1912 Brandywine St., Philadelphia, PA 19130 has all the things an artist might want to stimulate their creativity and give it concrete form. | Photos: Cory J. Popp via Solo Real Estate

Often, houses built as an extension or expression of an individual’s personality prove hard to sell. The architects who designed and built this standout residence in Washington Square West, for instance, have yet to sell it after offering it both publicly and quietly on at least three separate occasions, and it’s currently on the market again.

This Spring Garden converted carriage house for sale is also an extension of its owner’s personality. But unlike those architects, artist Elizabeth Osborne created a most flexible live-work space that you can adapt to express your personality. You will see here photos of the spaces both as they looked when she lived here and as they are now that she’s moved out to show you just how flexible her creation is.

For many years, Osborne lived in one place and worked in another: specifically, a studio space on North Front Street in Old City owned by her boyfriend, from whom she rented the space after they broke up. Meanwhile, her home migrated from one Rittenhouse Square address to another until she decided about 20 years ago that she needed to make her home and her workplace the same.

She found what she was looking for once she cast her gaze beyond Center City with the help of agent Ellen Steiner of BHHS Fox & Roach.

“I’d never explored the Fairmount area,” she says. “I was always over in Old City or Rittenhouse Square until she entered, showing me a number of places [until] I finally found a place I wanted. The minute I saw it, I said, ‘That’s it.’”

And it turned out that she knew the property owner, an art collector named Bob Ingersoll who had acquired works of hers in the past. Ingersoll had owned the carriage house for some 25 years before selling it to Osborne. Her daughter Audrey handled the 2001 renovation that transformed the upstairs into a modernist living space and updated the workshop with custom lighting and fixtures. 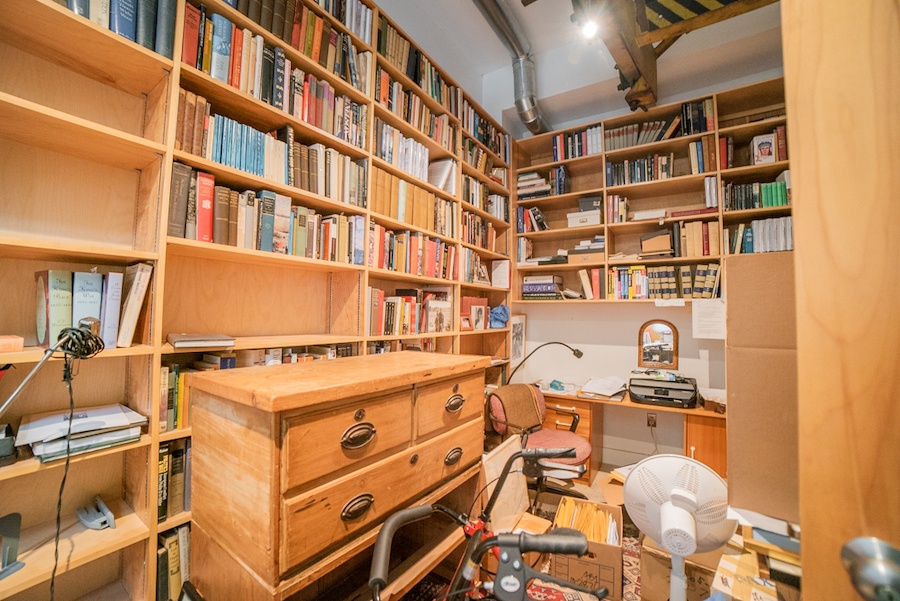 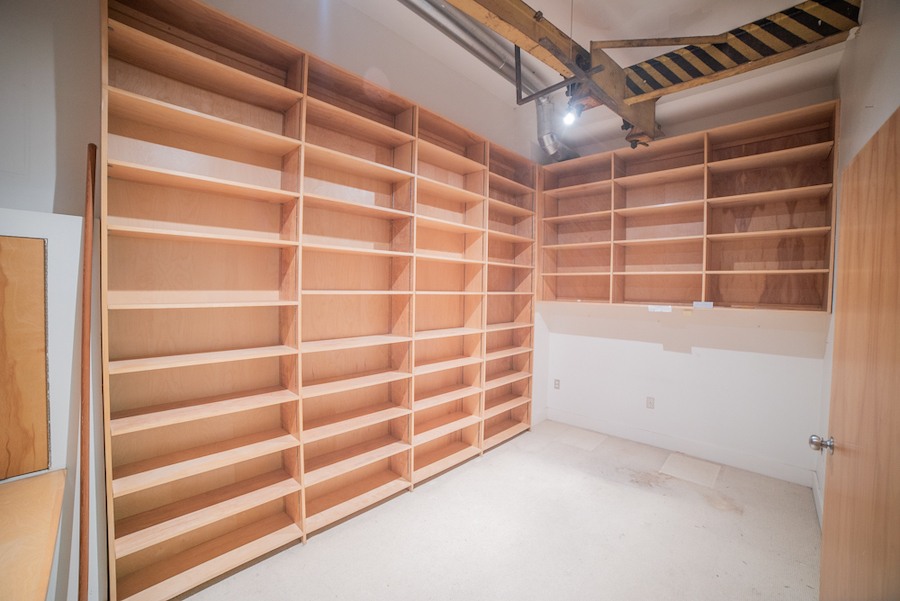 The house was ideally suited for her work. It sat on a large double lot, wide enough to accommodate both a one-car garage and an office in front next to the entrance. Audrey gives its dimensions as 38 by 90 feet, but the lot’s square footage as listed puts its dimensions closer to the 32 by 70 feet her mother recalls. 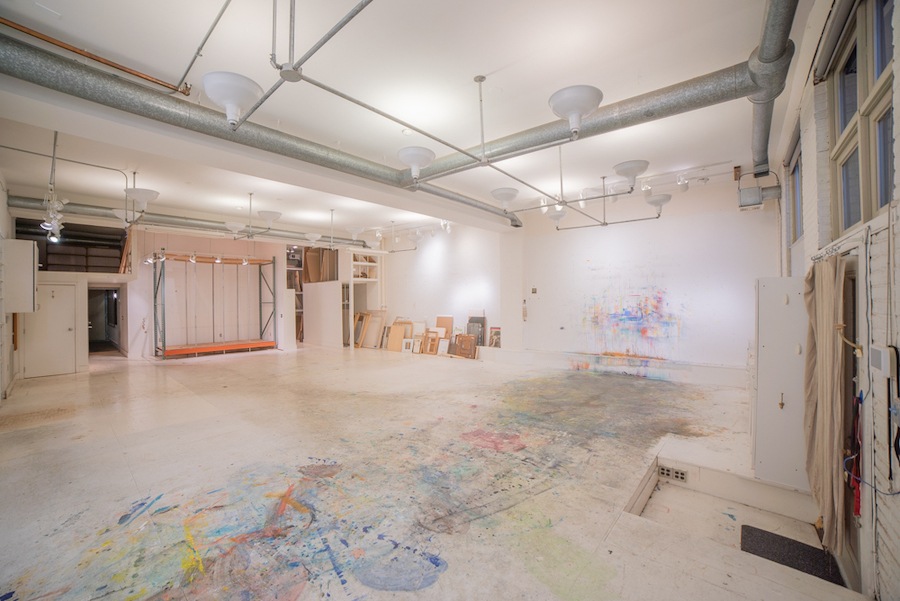 Behind these three spaces sits a large open space with a full bath and storage space galore. 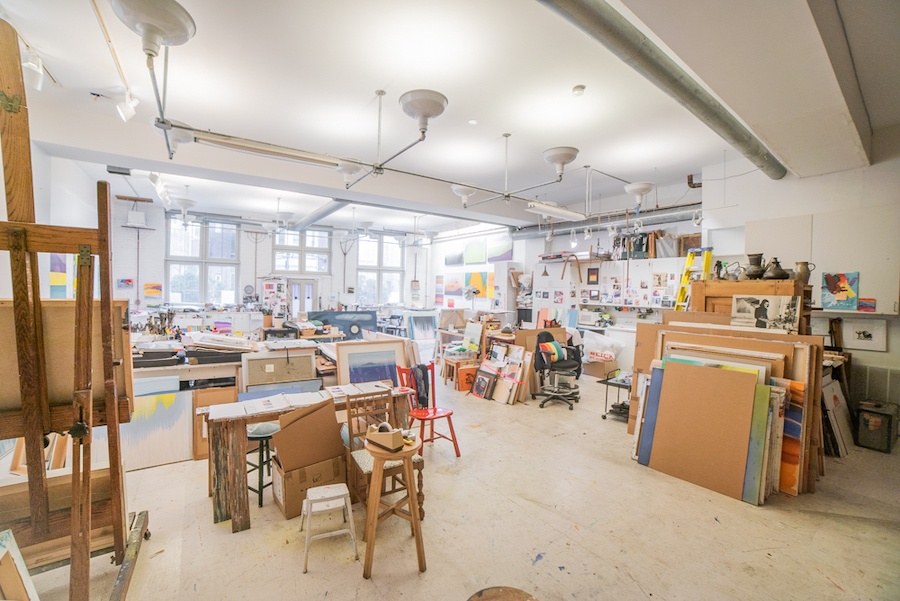 This space was where Osborne made the magic happen, and it’s ideally suited for any artist or craftsperson to set up shop. Doors at its rear, visible in the photo above, open onto a back alley, making it easy to receive materials and send out finished products. 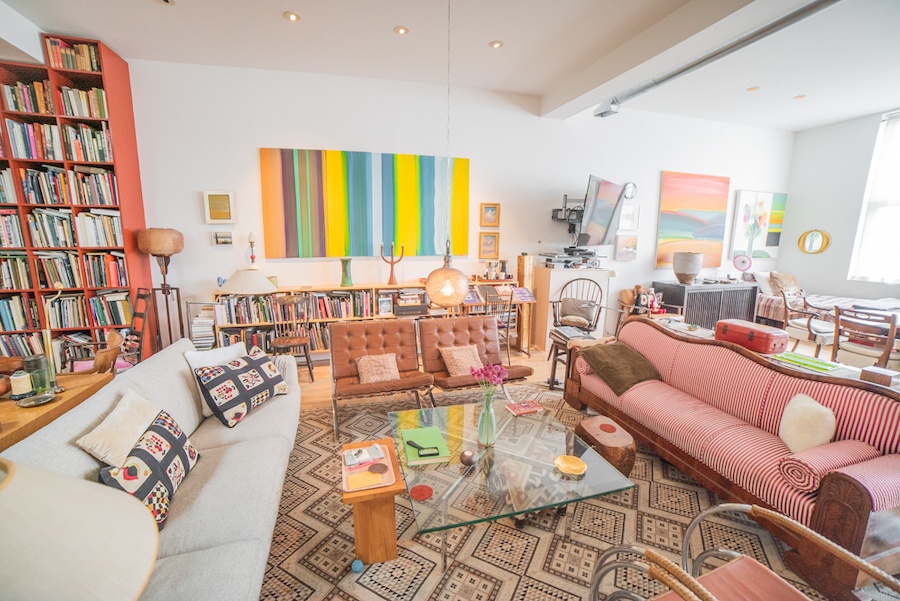 The upstairs is just as open as the downstairs. It consists of an open-plan living space, a full bath and two bedrooms. 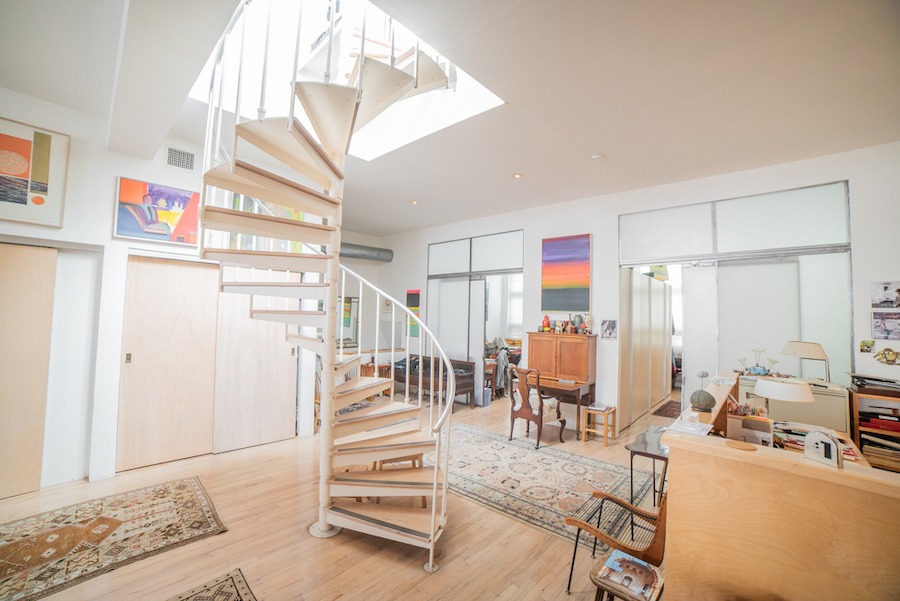 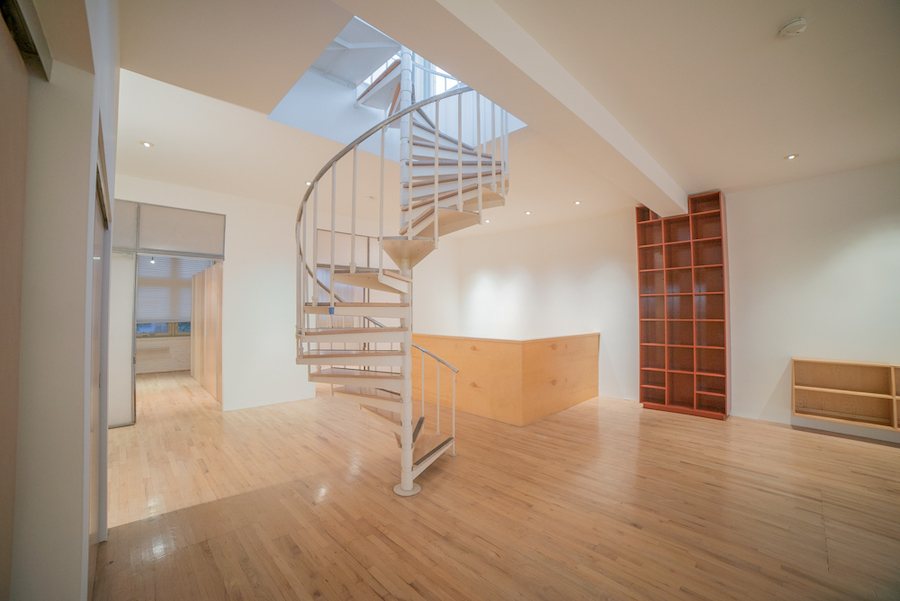 A desk and some bookshelves sit next to the bedrooms, suggesting that this part of the space could serve as a home office. 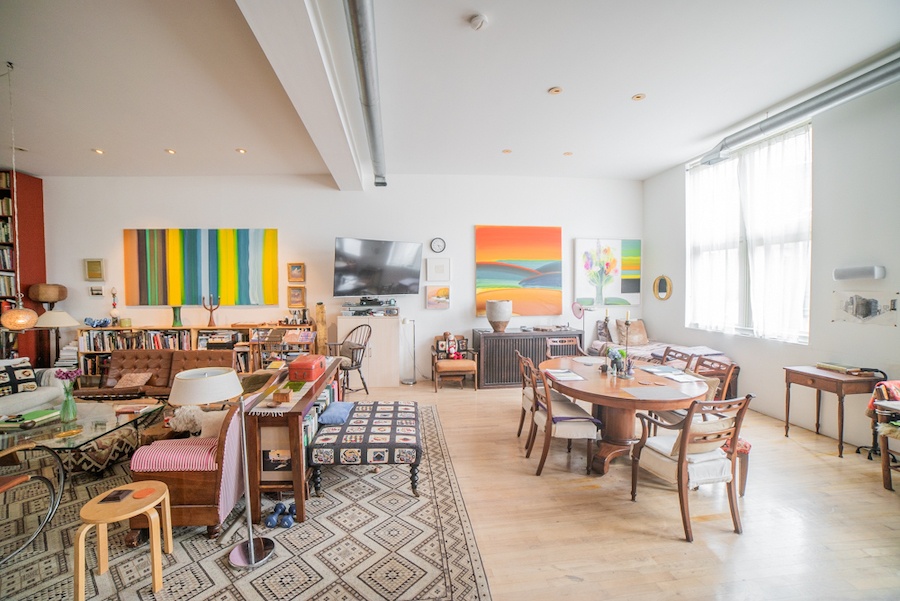 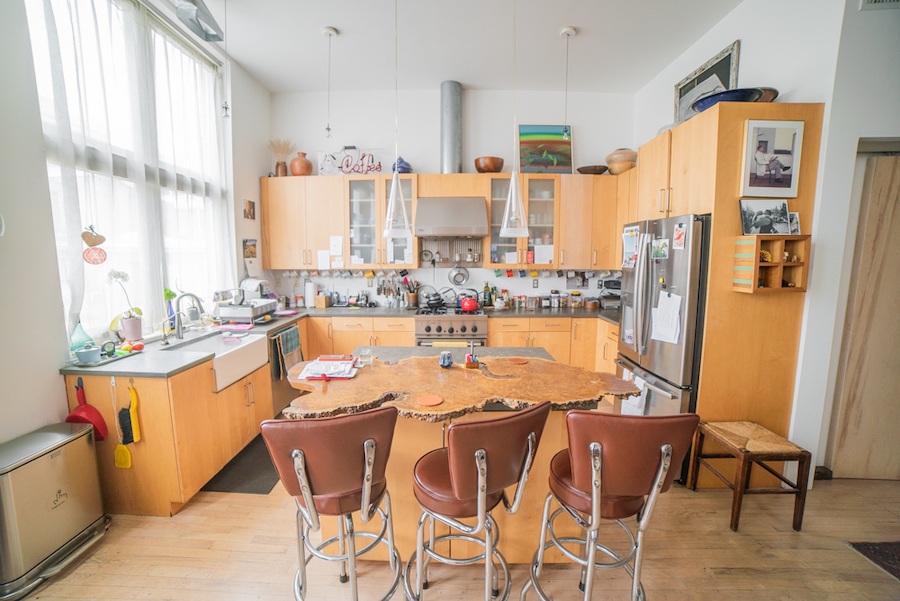 The kitchen lies at the other end of the space, which is why Osborne put the dining table there. 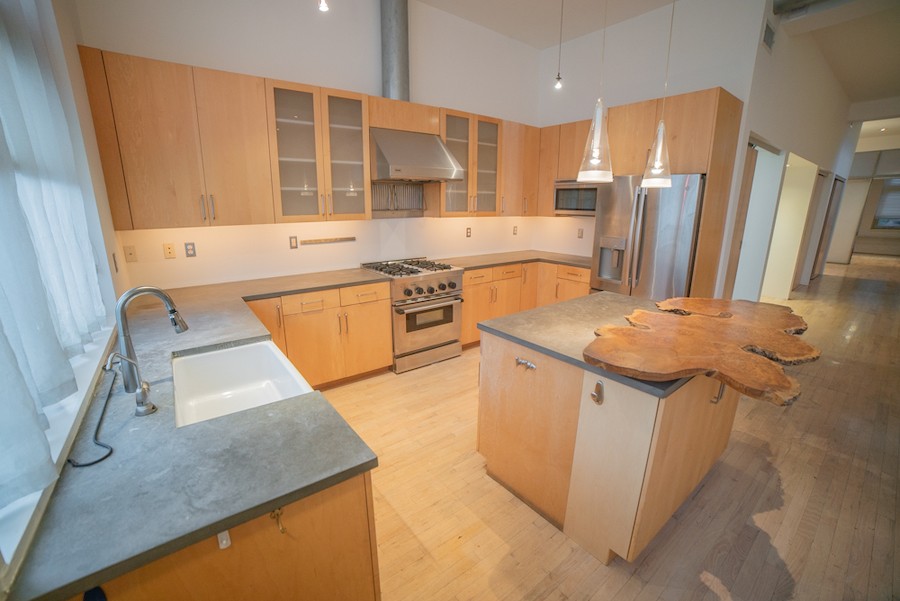 The totally modern kitchen gets some extra personality from the live-edge dining counter on the dining-area side of its island. 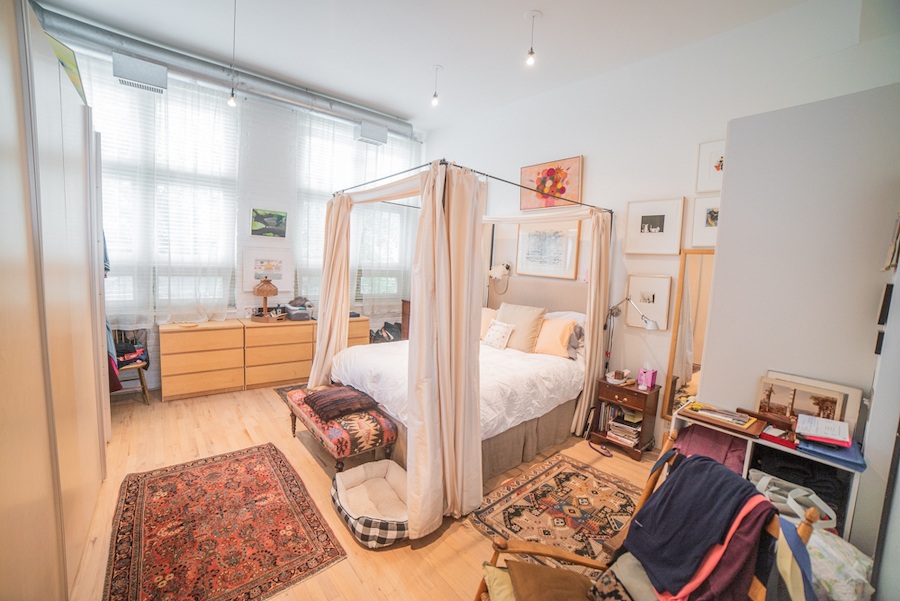 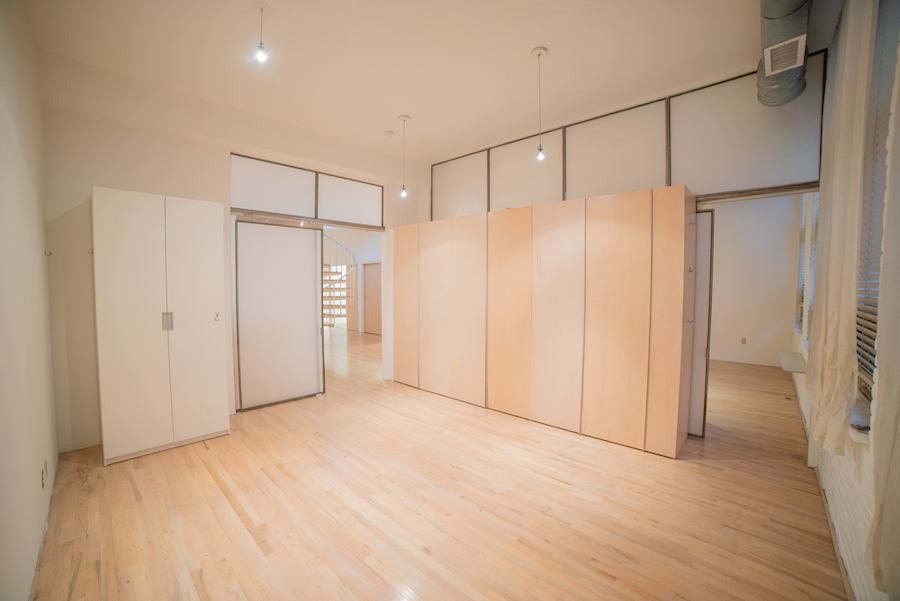 The bedrooms have freestanding closets and are separated by steel-framed shoji doors. 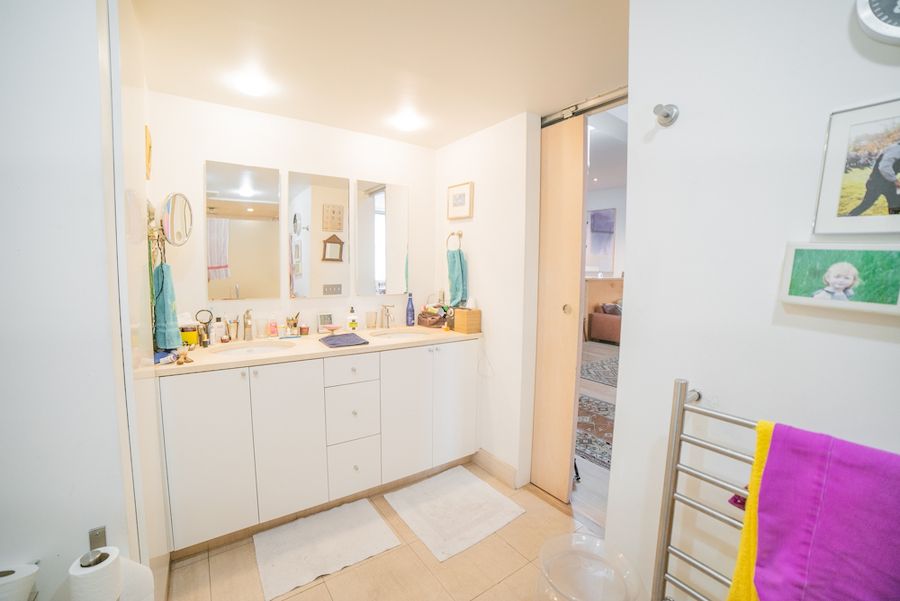 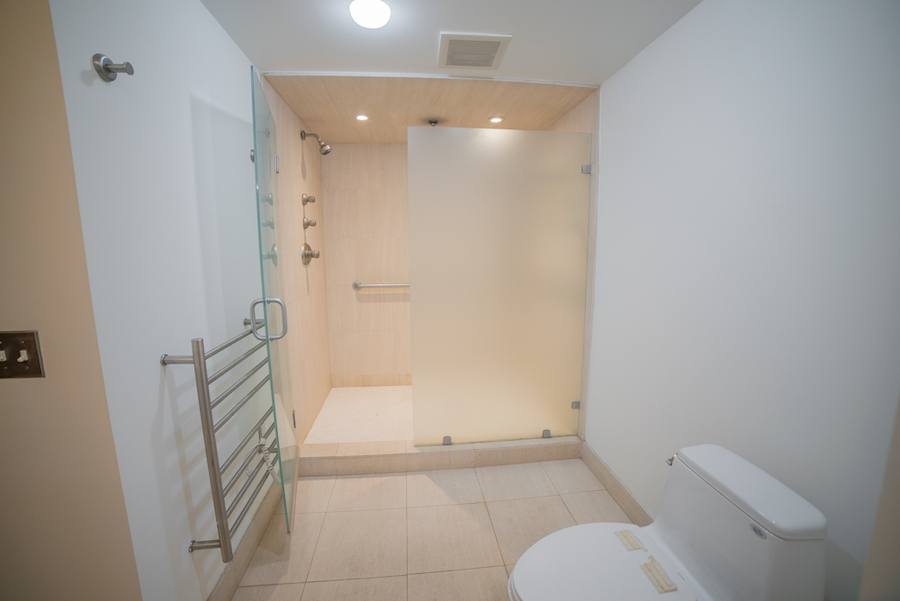 And the bathroom has a double vanity, a towel warmer and a walk-in shower lined with travertine marble. 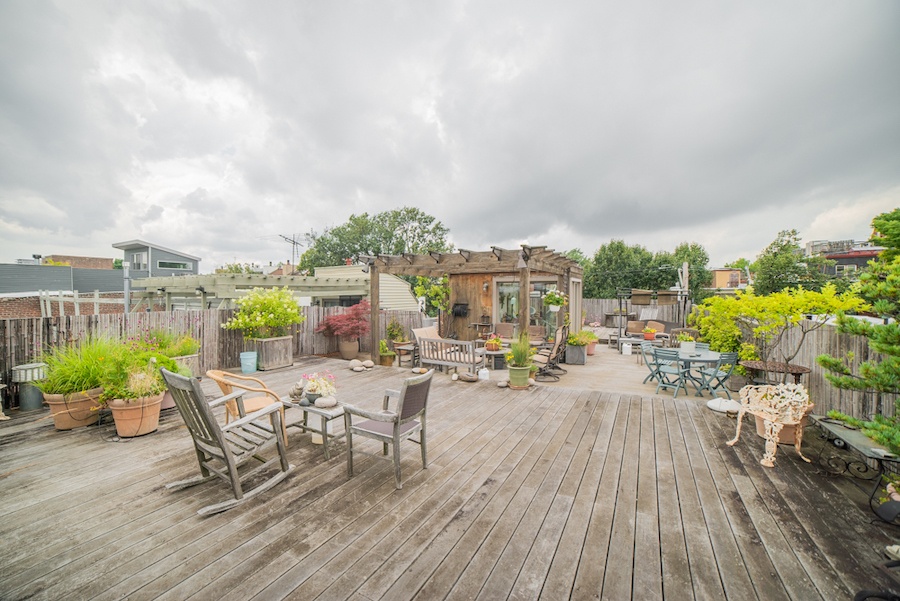 Something Osborne didn’t have to touch was the roof deck, accessed via the spiral stairway next to the home-office space and bedrooms. 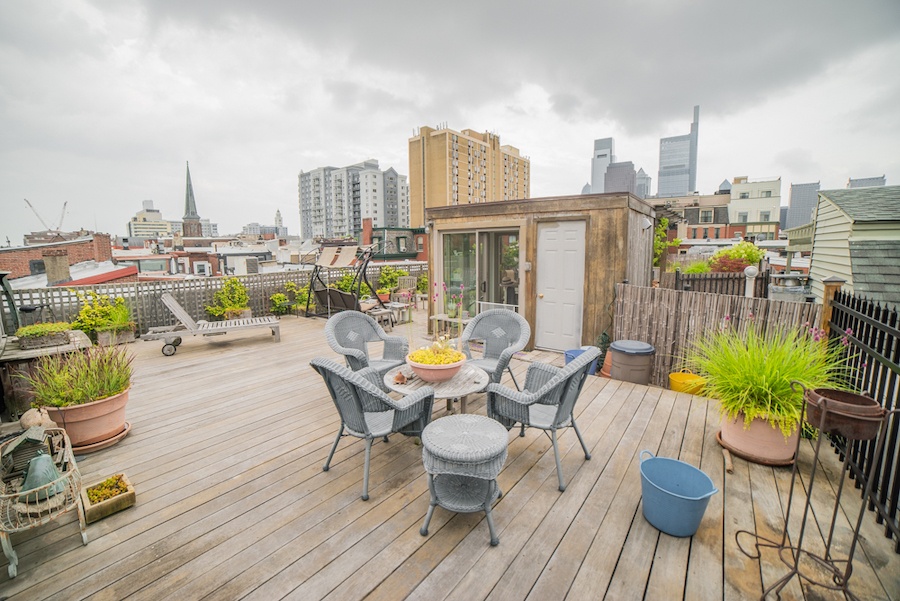 This huge deck spans the entire roof and offers panoramic views of both Center City and points north. 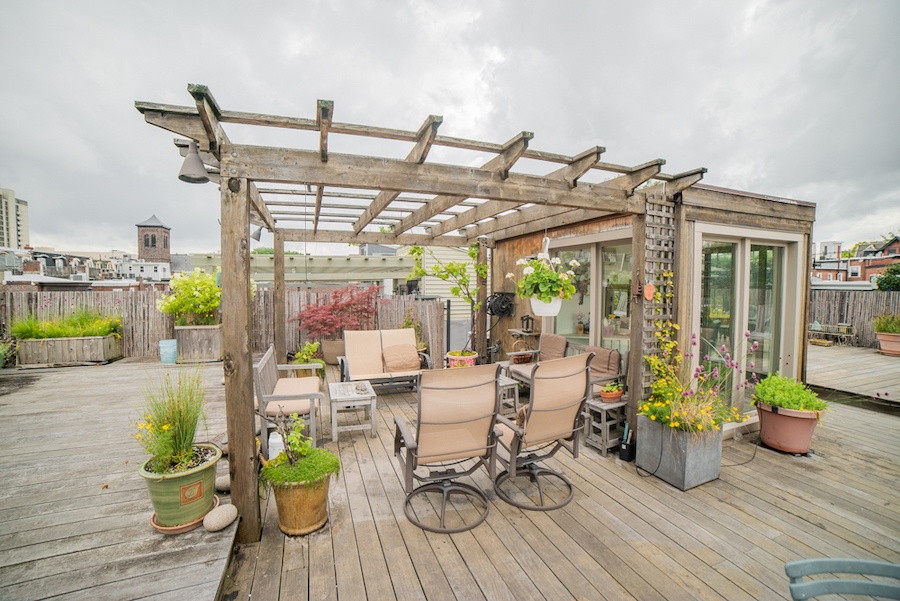 But even though it’s in good shape, you could also do some interesting things with this space, such as plant vines to cover its pergola or set up your own rooftop herb or flower garden. The deck has a shed where you can store gardening tools.

Osborne also says that the house comes with another nice amenity: its neighbors. “I have never seen a block where people are so interesting and good to each other” as this one, she says. Then there’s the community garden two blocks away and the many restaurants and neighborhood retail shops within walking distance.

All of this adds up to a fantastic place for anyone who makes things with their hands, be it furniture, jewelry, clothes or artwork. While this Spring Garden converted carriage house for sale may reflect Elizabeth Osborne’s personality, she left plenty of room behind for you to give it your own.