Built in 1845 to house a volunteer fire company, this renovated structure has everything that makes it original along with a bunch of things that make it modern. 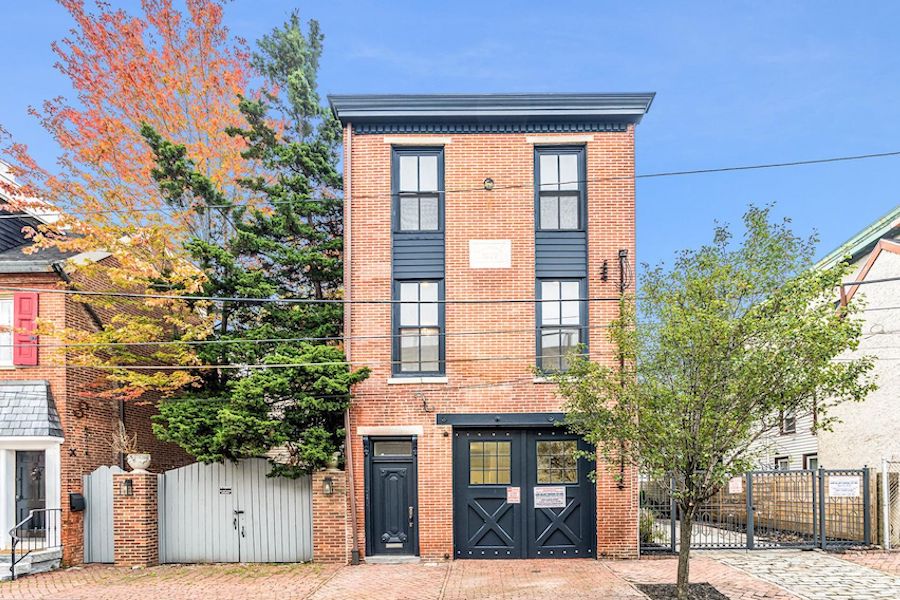 You are looking at that handsome brick edifice in the photo above. The fire company that built it was incorporated in 1781, as the marble stone embedded in its facade informs passers-by.

Back then, Fishtown was part of the district of Kensington, as it was in 1845; the neighborhood got its name because of the shad fisheries that lined the Delaware at this point. All of Kensington became part of Philadelphia in the consolidation of 1854, and the fire company eventually got absorbed into a professional city fire department.

This converted Fishtown firehouse for sale has much more than history behind it, though. This beautifully renovated looker checks off just about all the boxes on anyone’s Fishtown house-hunting checklist.

Some of those boxes have to do with this house’s location, which I’ll get to in a little bit. But first, let’s look at the house itself.

For starters, it sits on an unusually wide and unusually deep lot: 35 feet wide and 93 feet deep. And the way the lot and house are configured make this one of the few houses anywhere in Philadelphia where parking will never be a problem.

That’s because its original engine bay, behind the double doors in front, remains a one-car garage. 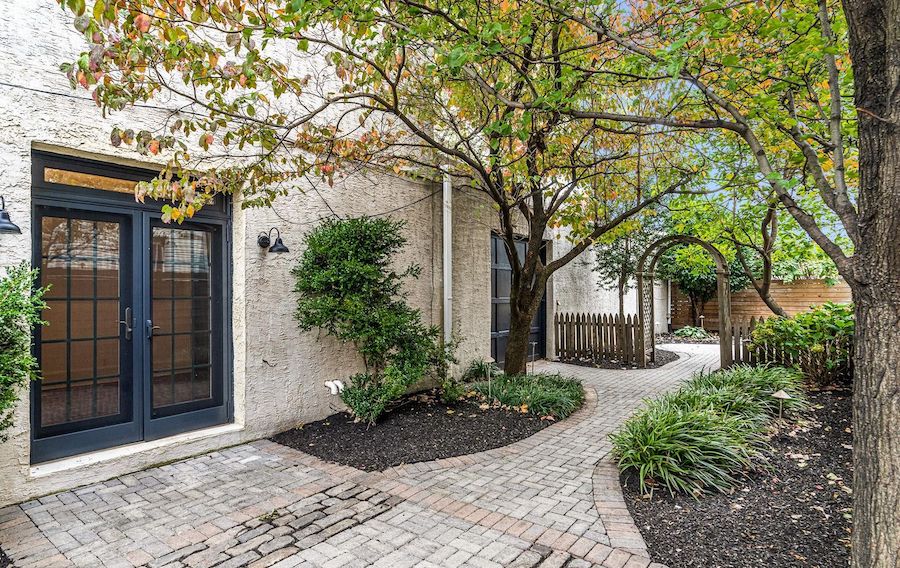 Driveway and side yard

Then, beside the house, a stone-paved driveway can hold two more. 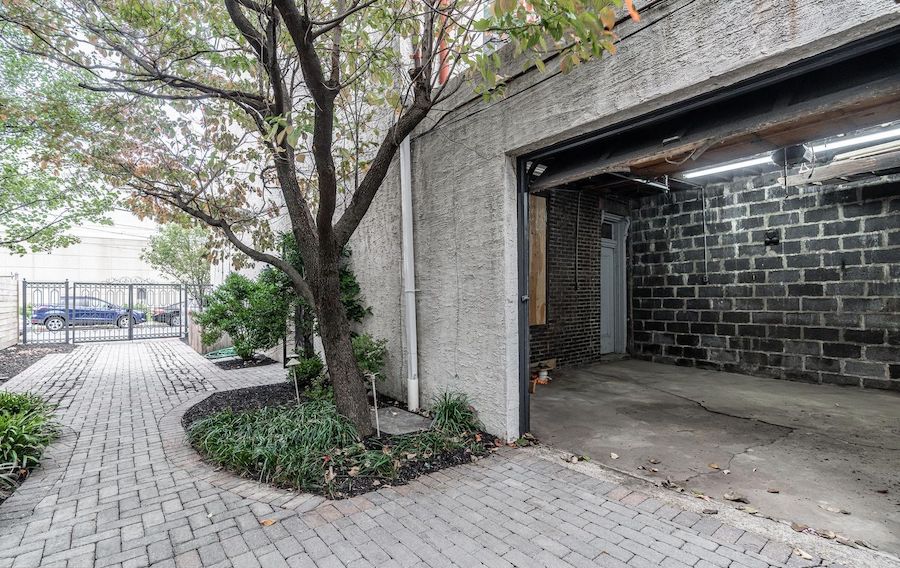 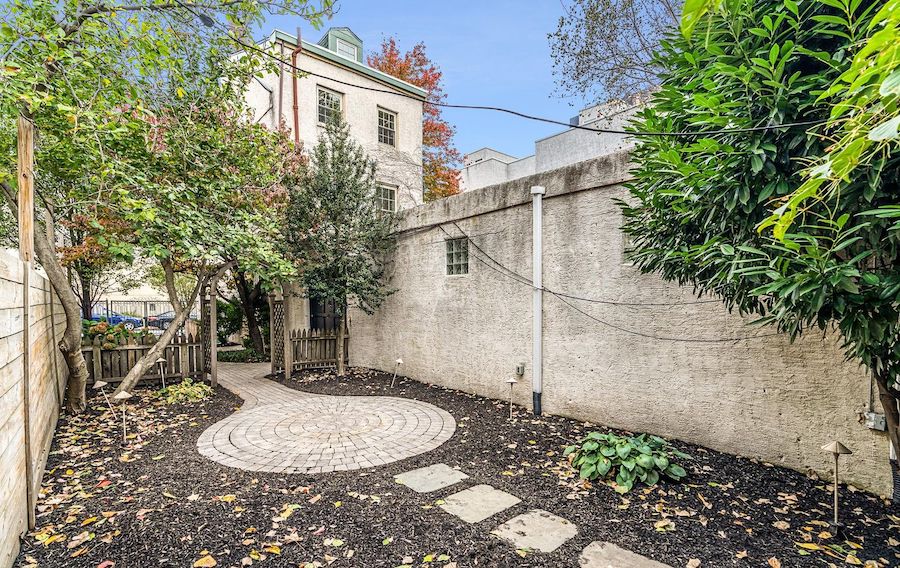 And a one-story rear wing, accessible from the side yard, contains a second garage with room for six more cars. Those cars will mess up the plantings in the side yard as it’s now configured, though; you might want to give some thought to coming up with other uses for this rear wing. (More on that later, too.) 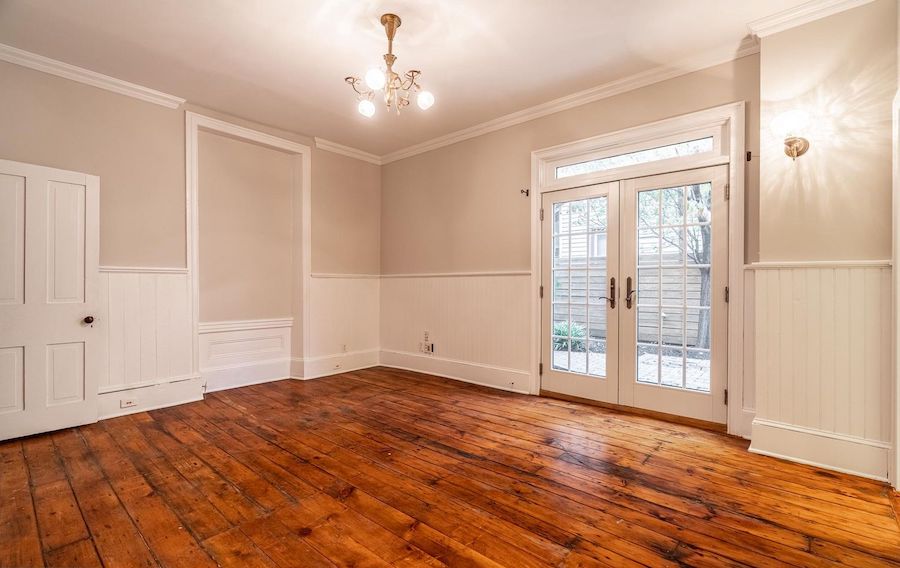 Inside, a corridor leads from the front door past the garage to a handsome bedroom, which also has French doors that open onto the side yard. The original batten-board wainscoting got freshly repainted and the old-growth heart pine hardwood floors now sparkle. A half bath, also with batten-board wainscoting, is attached to this room.

You will find many original fixtures, fittings and features in this house, such as porcelain doorknobs mounted on iron locks, marble thresholds and original millwork. The brass light fixtures and clawfoot tubs came later but are still vintage, as are some other items you will see in this converted Fishtown firehouse for sale. 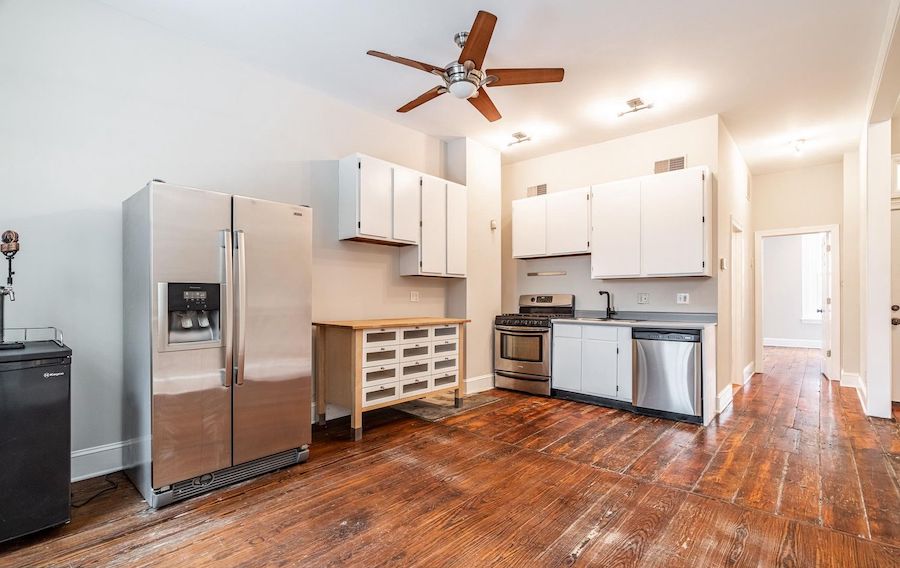 The eat-in kitchen on the second floor has a full suite of modern features, including a five-burner Kenmore stainless-steel gas range, a stainless-steel refrigerator-freezer, modern white cabinetry and black matte faucet, a rollout butcher-block island and a kegerator. 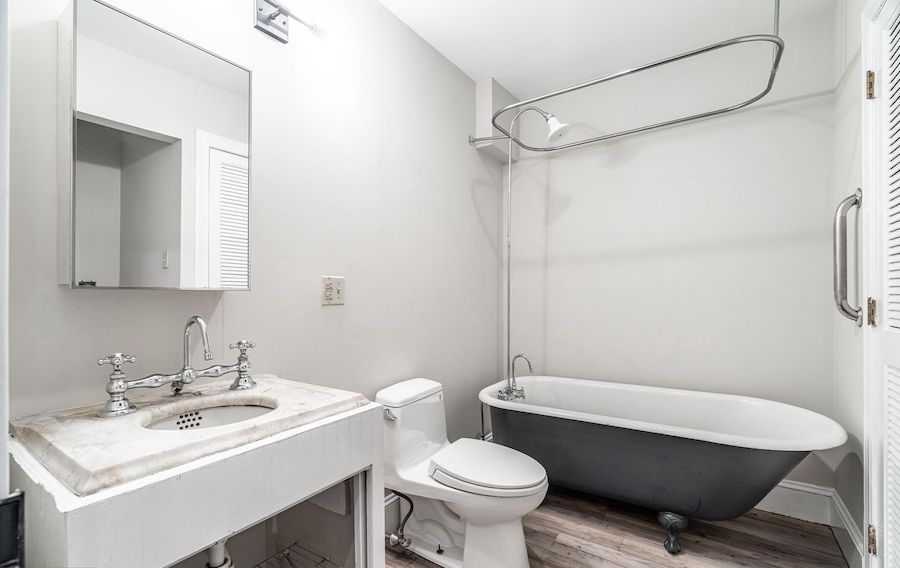 The bathroom, on the other hand, features vintage plumbing and a reclaimed vanity under its reclaimed marble face basin. 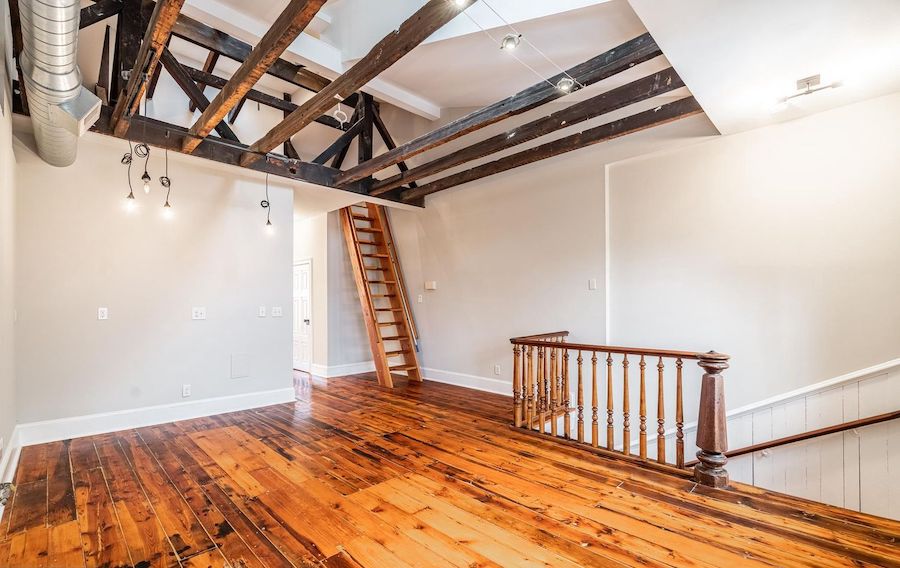 The third floor has a large family room with original exposed roof beams. 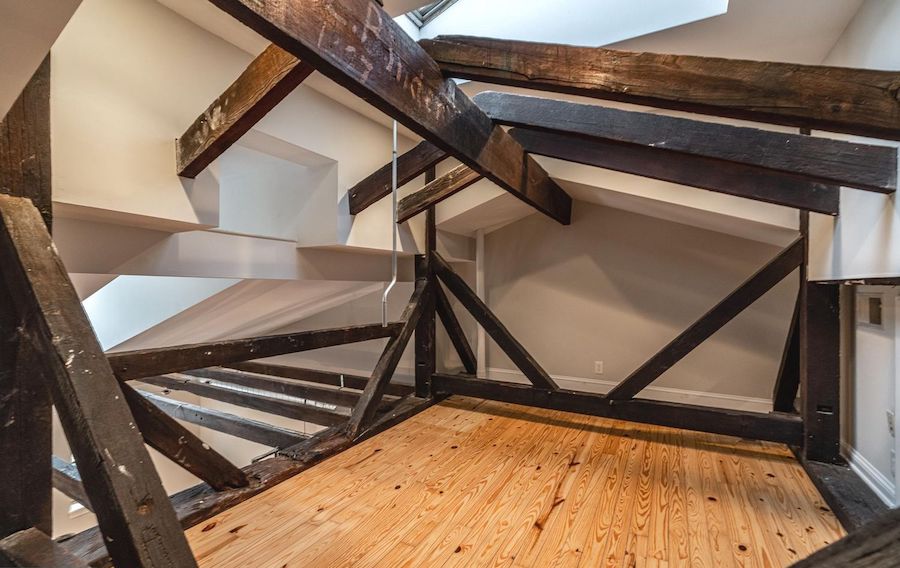 Family room loft; note the markings on the central beam

It also has a skylit loft area accessed by a ladder. The support trusses diminish its utility a bit, but you could still use this loft as a storage area, a sitting area or even a home office. 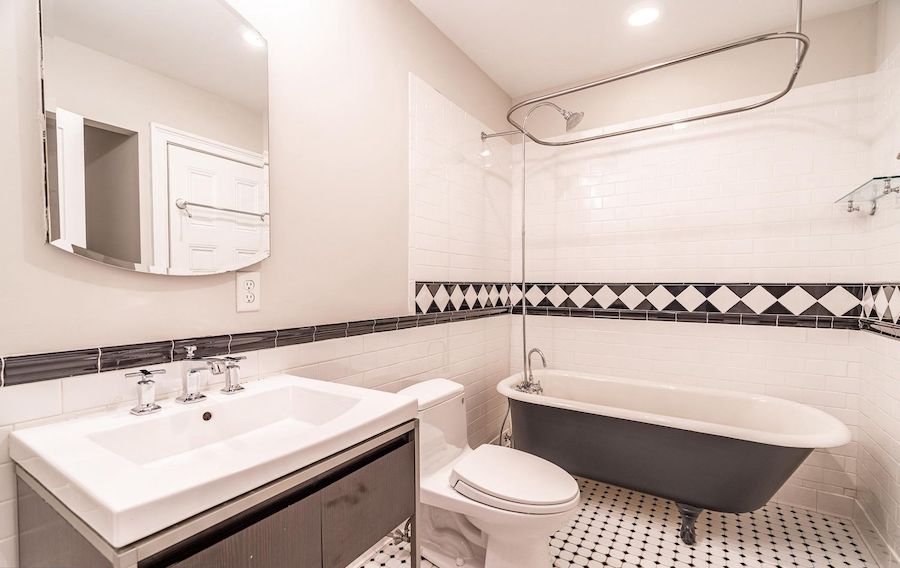 The bathroom got upgraded: Accompanying its clawfoot tub are tile wainscoting, a tile floor, a tile surround for that tub and a contemporary-style vanity. 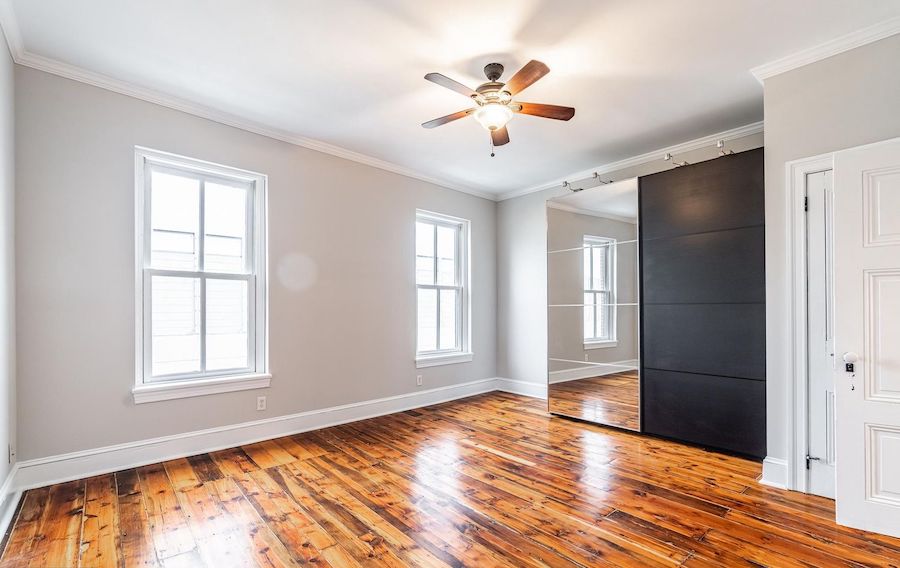 And the primary bedroom at the front of the floor has a mirror-and-matte finish armoire for a closet.

Other modern features added as part of the renovation include dual-zone climate control with an electronic air cleaner with ultraviolet purifier, two laundries, Toto toilets and Cat5 Ethernet wiring along with coaxial cable.

The listing agent offers a raft of possibilities for the rear wing and lot. Instead of using it as a garage, you could use the rear wing as a workshop, or you could convert it into additional living space, a new primary bedroom suite, an in-law/au pair/guest suite, an art or photography studio, a home gym or a playroom, or some combination of these. You can also build a roof deck or garden on top of it — one of the kitchen windows is large enough to be converted into a door — or you could build two additional stories on top of it.

You could also build a second three-story house on the side lot. You have room enough to give it parking and a backyard all its own. (In which case you might consider demolishing part of the rear garage to give your house a backyard again, especially if you decide to sell the side lot.)

Now for the other boxes this house checks off. It has a very desirable location — with an asterisk. The “very desirable” part: Just about everything that brings people to Fishtown is within reasonable walking distance from here. The shops, restaurants and nightspots along Girard Avenue. The Frankford Avenue dining and shopping district. Penn Treaty Park. Rivers Casino and the Canal Street entertainment complex.

You can even walk to the Aramingo Village shopping center and its IGA supermarket at Fishtown’s far end from here, but doing so means you have to negotiate the maze of roads around the Girard Avenue exit off I-95.

Which brings us to the asterisk: Here you have the freeway for an across-the-street neighbor. Fortunately, sound barriers keep it from disturbing you too much. If you drive, that interchange may make it worth living here, especially since parking won’t be a problem. But even if you don’t, living here puts you close to both Route 15 and Girard station on the Market-Frankford Line.

All this, and you get a certified copy of the 1781 Act of Incorporation of the Kensington Fire Company No. 1, complete with wax seal, as part of the deal.

That certainly makes putting up with I-95 a small price to pay for making this converted Fishtown firehouse for sale yours, doesn’t it?