Broadridge, Now Complete, Offers Something for Everyone

The neighbors got the supermarket they wanted, and the residents get many classy amenities, including one not found in any other local apartment building. 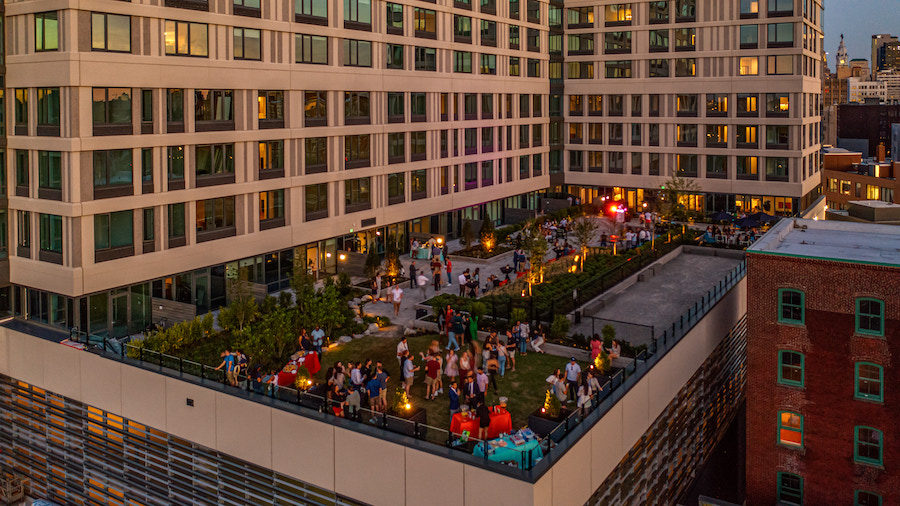 The Broadridge grand opening party on June 15th showed that the building’s ample terraces could handle a crowd. Everything else at this luxury apartment community scales up well too. | Exterior photos: Philadelphia Real Estate Photo; interior photos: Zillow Rentals + HouseLens unless otherwise noted

Last fall, we introduced you to a huge new Aldi supermarket at Broad Street and Ridge Avenue and to the apartment building RAL Companies designed around it.

When we toured that building, plenty of work remained to be done on the apartment building, known as Broadridge. There were still items on the punch list when leasing of the apartments started in February.

Now, Broadridge is totally complete, and tenants have been moving in since June. Maybe, after taking a look at its amenities, you might want to join them.

Because whether you rent your own apartment or a piece of one — like some other recent projects, Broadridge offers both standard apartments and rooms in co-living suites managed by Common — you will be able to really live large here.

That’s because the amenities at this 478-unit apartment building — the largest one-building rental apartment community in the city — are all designed to handle a crowd.

“This building is all about scale,” says Spencer Levine, president and director of landscape architecture and site development at RAL. The amenities, he says, provide  “opportunities for everyone to be part of a real community.”

And those 478 apartments — 147 of them co-living units with anywhere from one to three occupants — comprise a sizable community. So RAL scaled up the facilities to accommodate that large community.

Starting with the building’s two terraces, which got put to the test at a grand opening party June 16th. 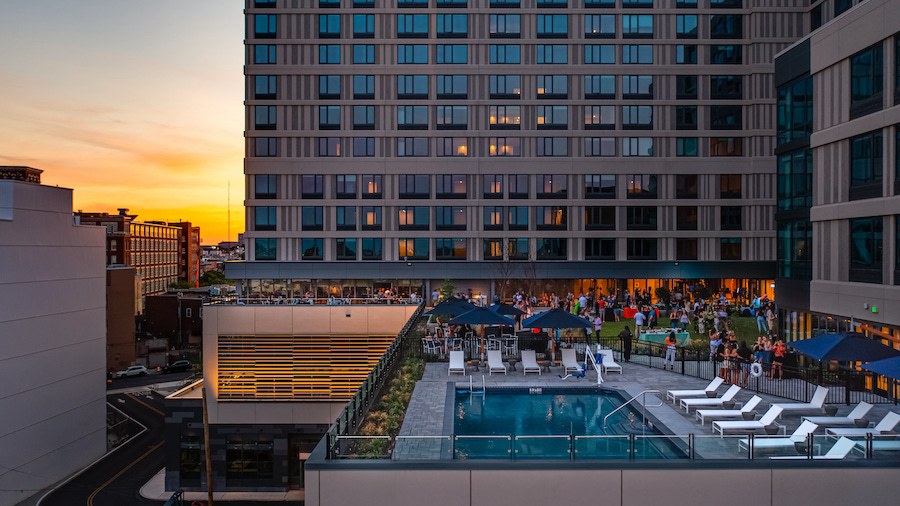 The east terrace during the opening party

Most of the indoor amenities look out on the larger, east-facing terrace. 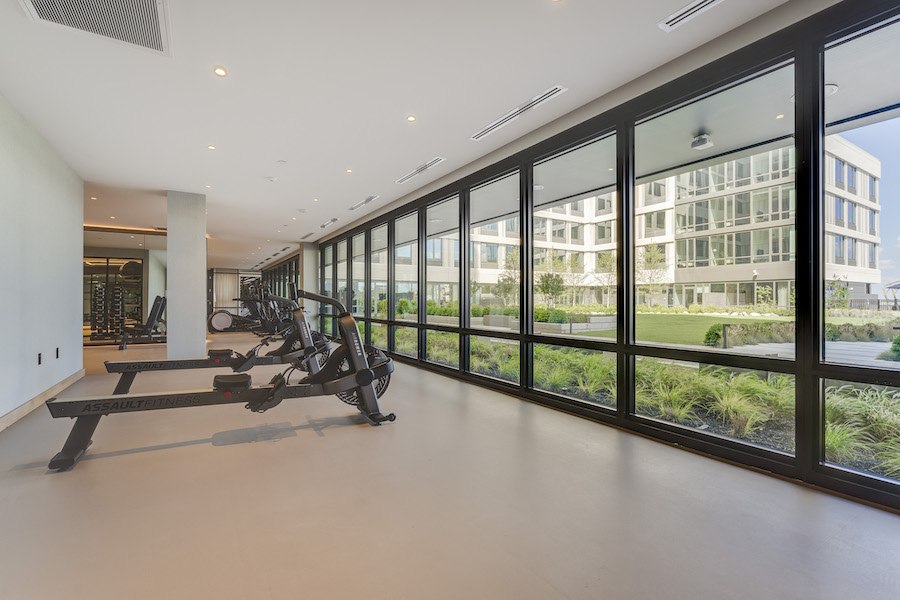 The fitness center and the yoga studio sit next to the terrace’s large lawn. 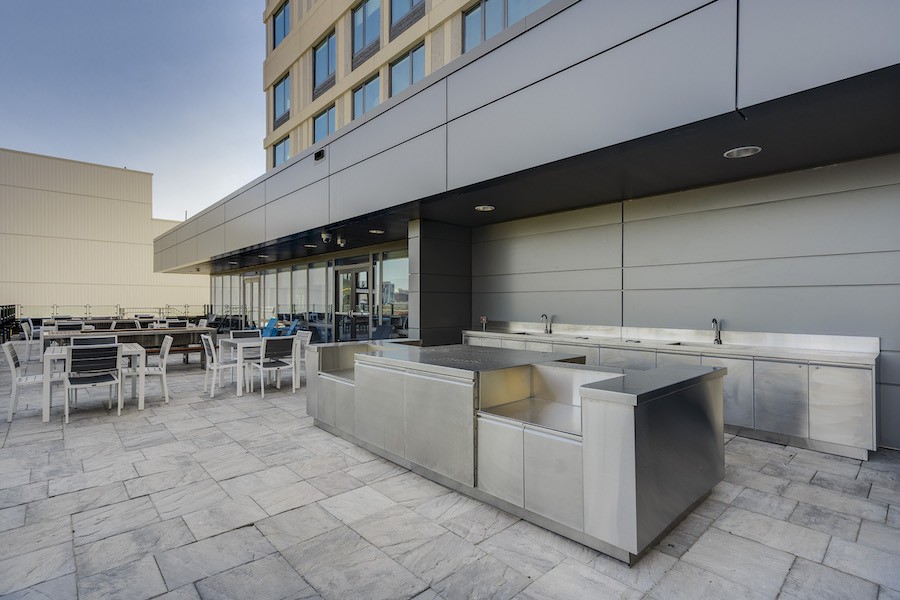 Outdoor kitchen and dining area, taken in June before the grills were installed in their island

At the south end of the lawn, next to the club room, is an outdoor kitchen with four gas grills. 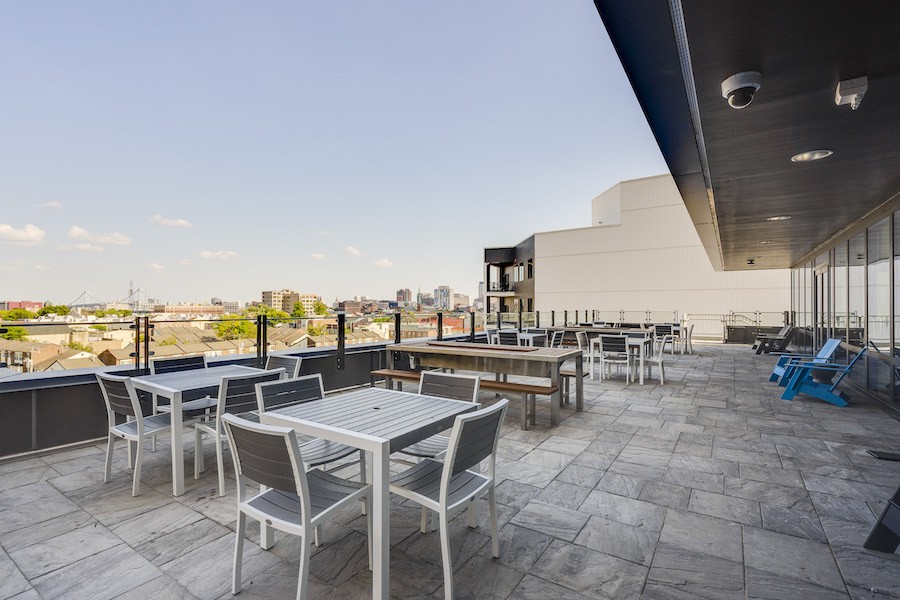 The dining area next to this kitchen includes two eight-foot-long dining tables with grills in their middle, which may make this building one of the few in the city — maybe even the only one — where tenants can treat their friends to Korean-style barbecue or a Japanese-steakhouse production. 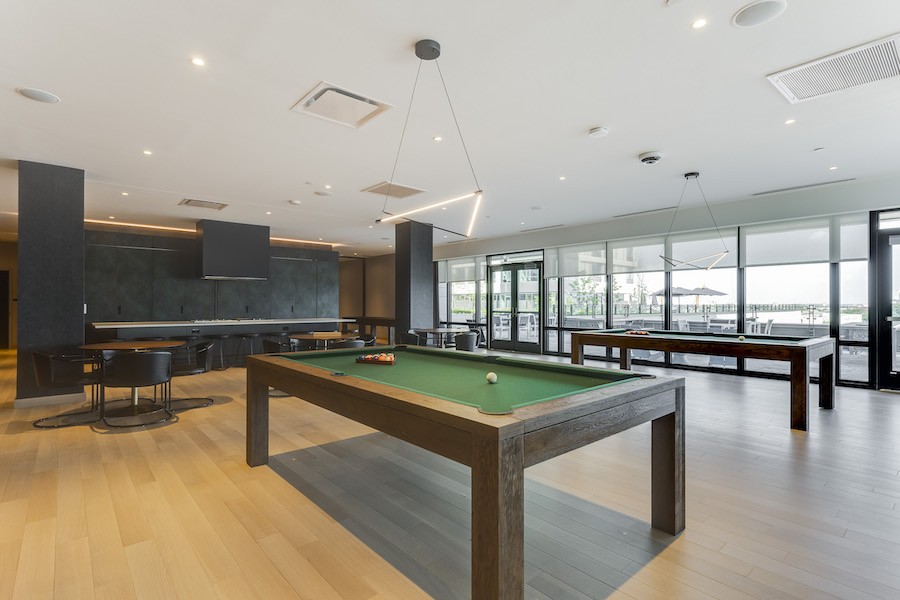 The club room next to the outdoor dining area has pool and shuffleboard tables. It also has a demonstration kitchen lavishly equipped with Miele appliances that include a microwave/convection oven, an induction cooktop, a warming drawer and a griddle. 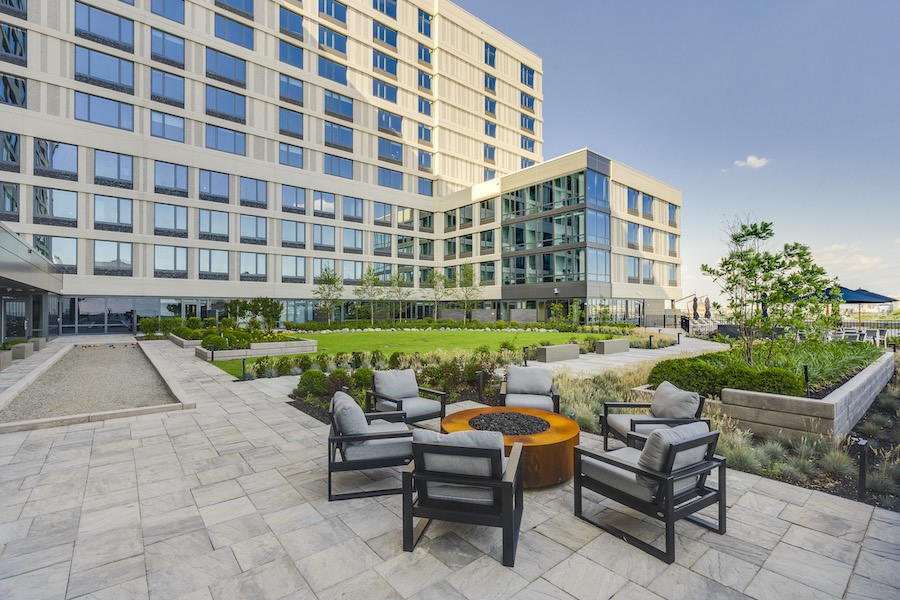 The part of the terrace by the club room also has a fire pit and a bocce court. Other dining areas are scattered around the terrace. 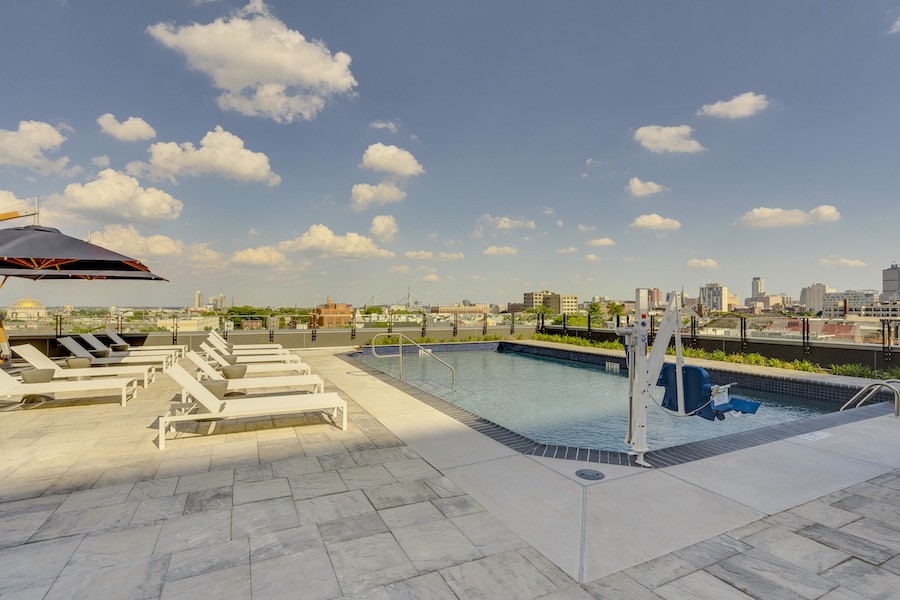 The building’s fully accessible swimming pool sits at the east end of the terrace. Next to it is an indoor cabana consisting of a lounge with a kitchenette and big-screen TV and bathrooms for changing. 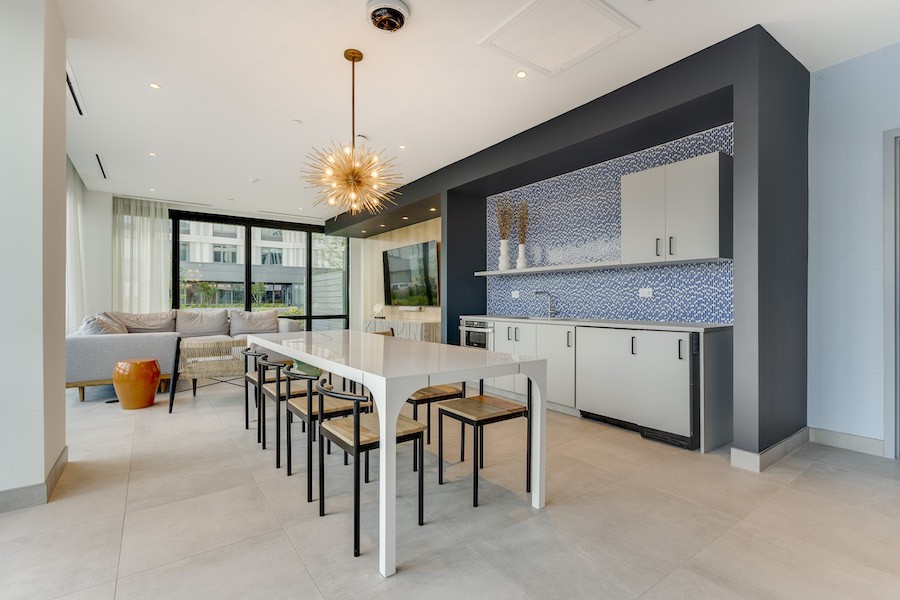 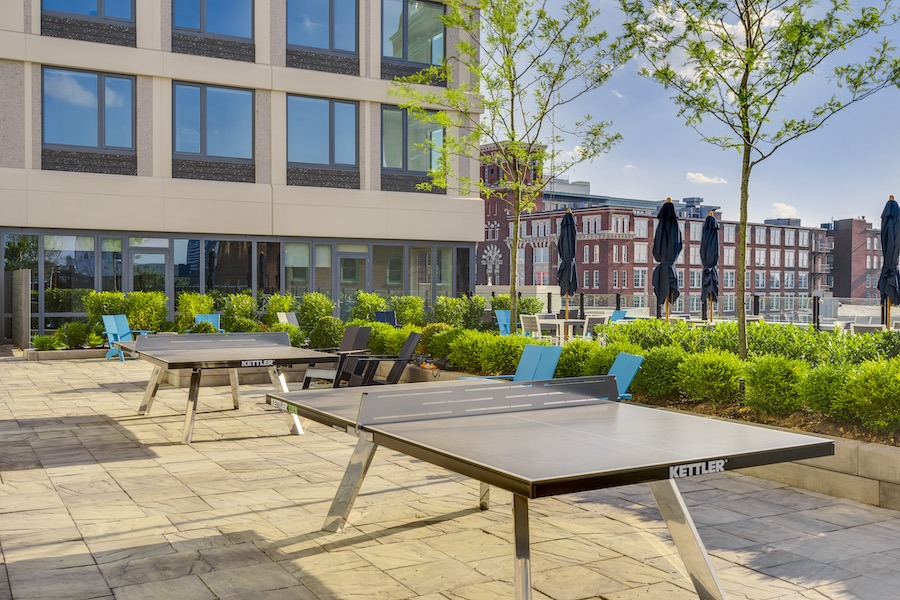 Besides a chance to view gorgeous sunsets, the west terrace offers opportunities for active recreation: a yoga lawn, dog run, and table tennis tables all grace this space. 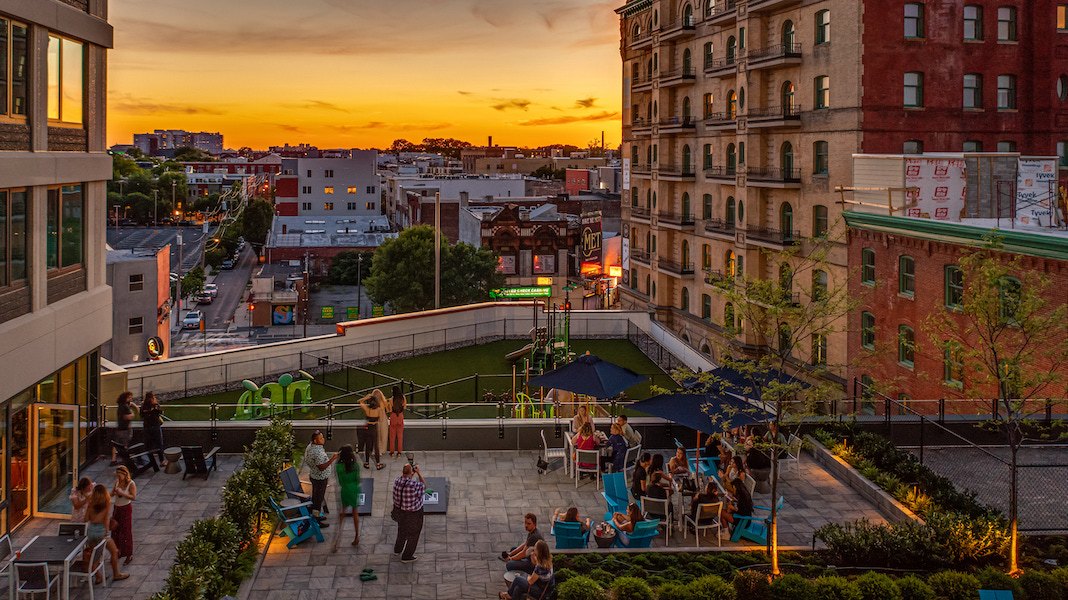 The west terrace, situated next to the Divine Lorraine Hotel, offers a great view of the sunset over Fairmount

There are also seating areas. It overlooks the playground atop the Chesterbrook Academy daycare facility in the retail shops below. 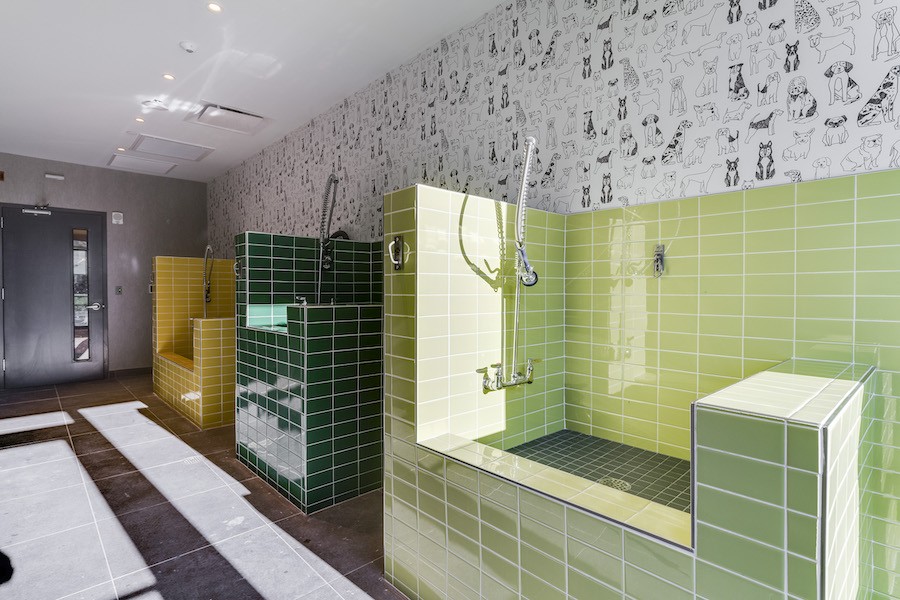 The dog spa accommodates all sizes

The dog spa and a coin-operated laundry room (for use mainly by the co-living tenants) lie off a corridor leading to the west terrace from the amenity-floor hallway. 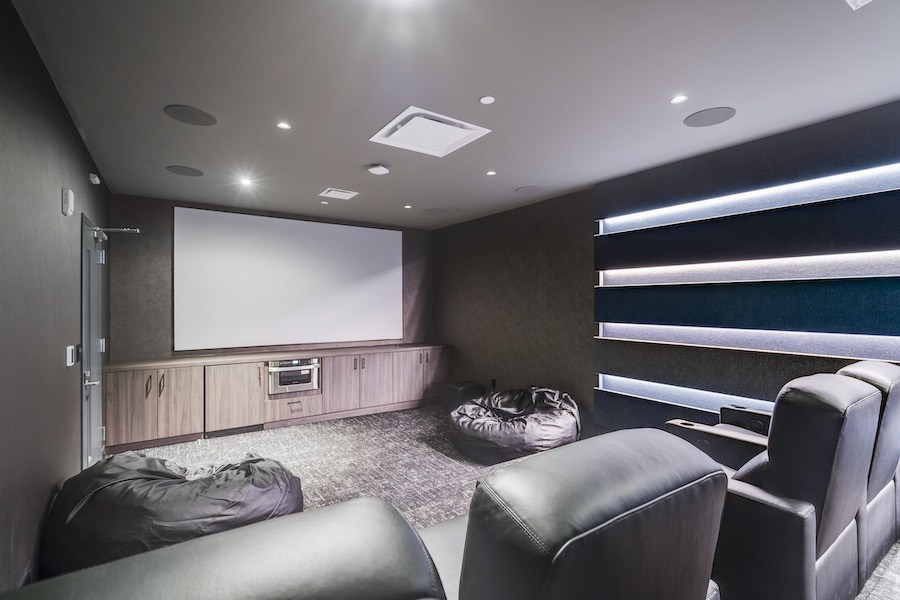 Broadridge also offers tenants a screening room next to the indoor cabana that can be booked for parties and events. While it has no popcorn machine, it does have a microwave oven and fridge for you to prepare snacks and store cold beverages. 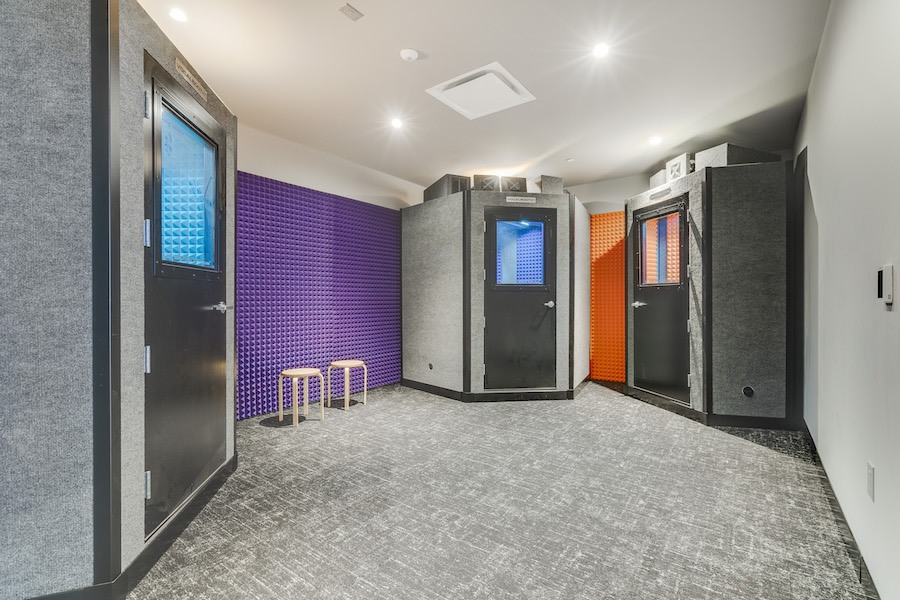 The amenity that sets this building apart from all the rest, however, is its trio of podcasting studios, located behind the game room and demonstration kitchen.

Levine describes this as a different kind of co-working space, aimed at a growing class of content creators. “We’ve heard of a lot of people doing [podcasts], even people doing voiceover work — all this is being done remotely now,” he says. “This provides the opportunity for that.

“We’ve even had people ask if their bands can practice there.” Levine says that the largest of the three studios could conceivably hold a duo or trio. 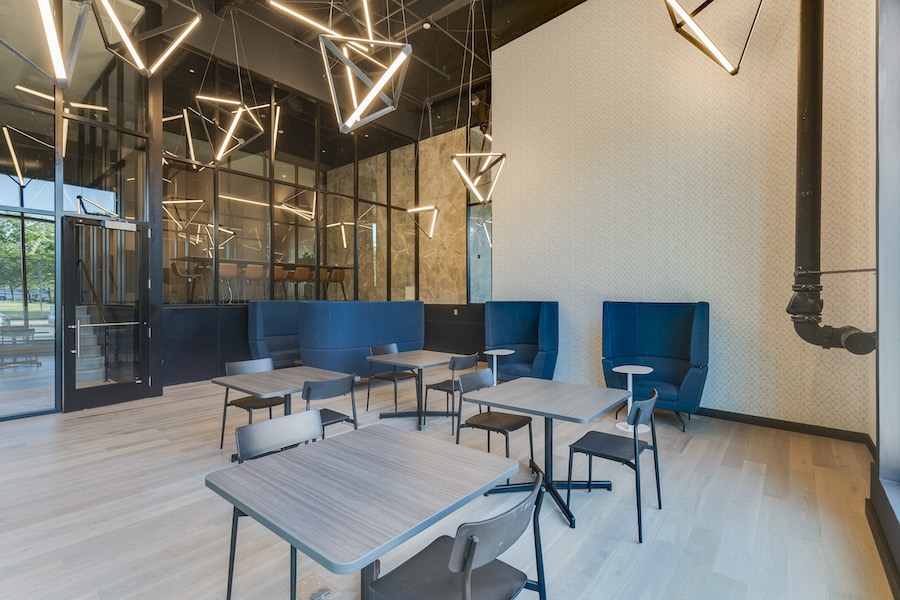 There is also a co-working space of the more traditional kind off the lobby. While the apartments are definitely equipped for working from home, “work from home is one thing, but there’s only so much time you can spend in your bedroom or living room,” says Levine. 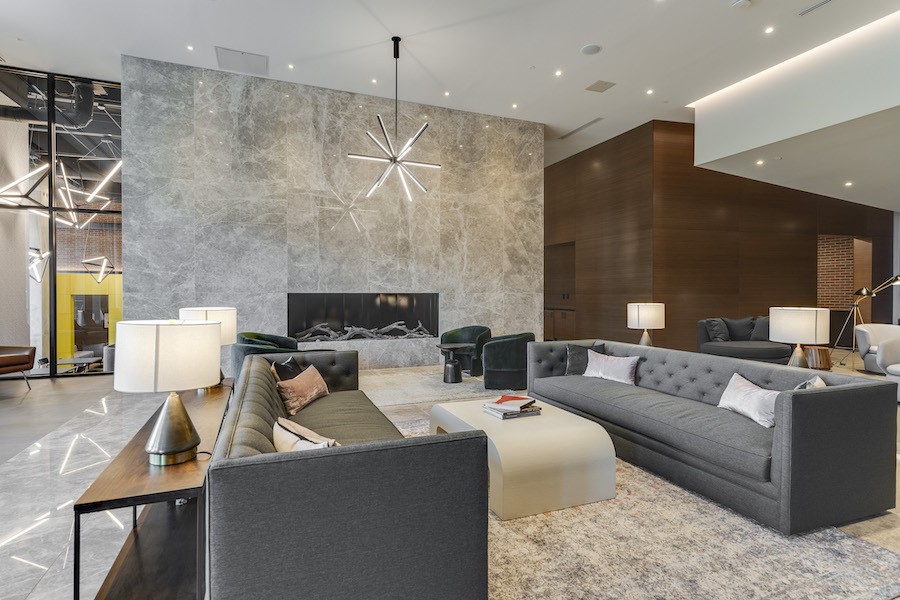 There’s a board room next to the co-working space, and the lobby lounge is also equipped for remote work. The books in its library span several decades and are meant to be read. “The idea here is that you can think and get lost in a book by yourself, or the seating can be made more communal,” says Levine. 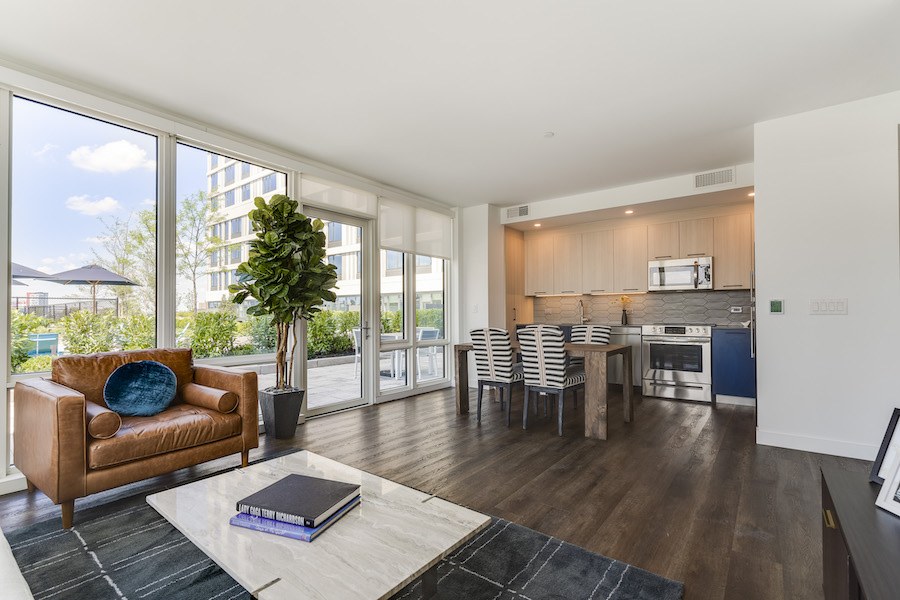 There are also some apartments on the amenity floor, facing both terraces. One currently serves as a model unit for prospective tenants. 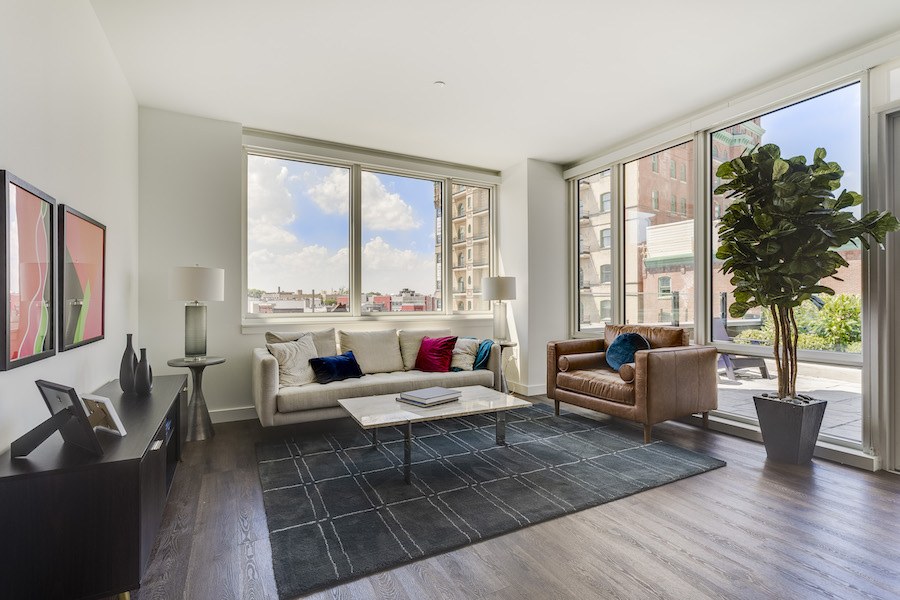 Each amenity-floor apartment has its own private terrace, separated from the community terrace by a row of low bushes. Levine says the bushes delineate the private space without making it feel claustrophobic by allowing a view to the larger terrace. 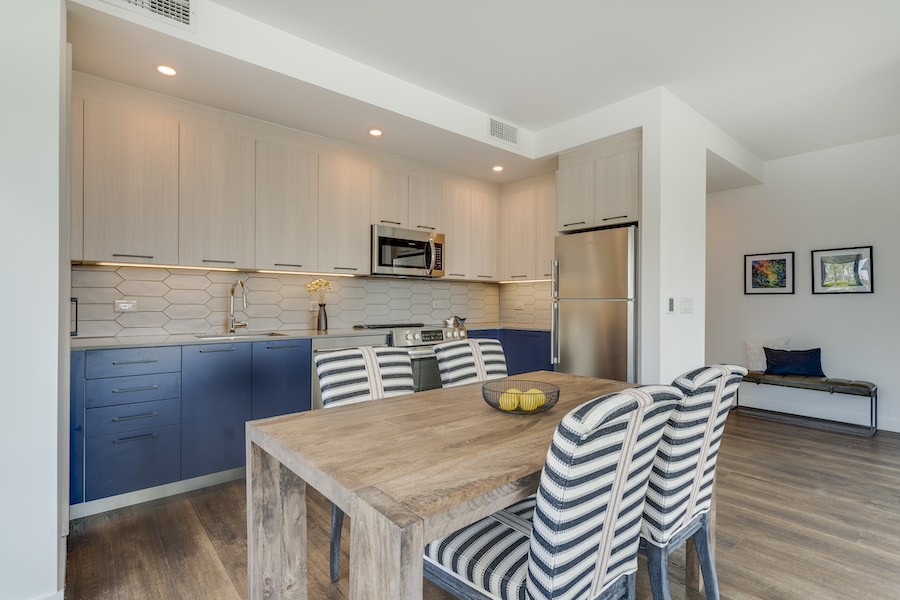 Another distinctive feature about these apartments: The refrigerators in their kitchens have built-in wine racks. “We thought they would be much appreciated,” says Levine. 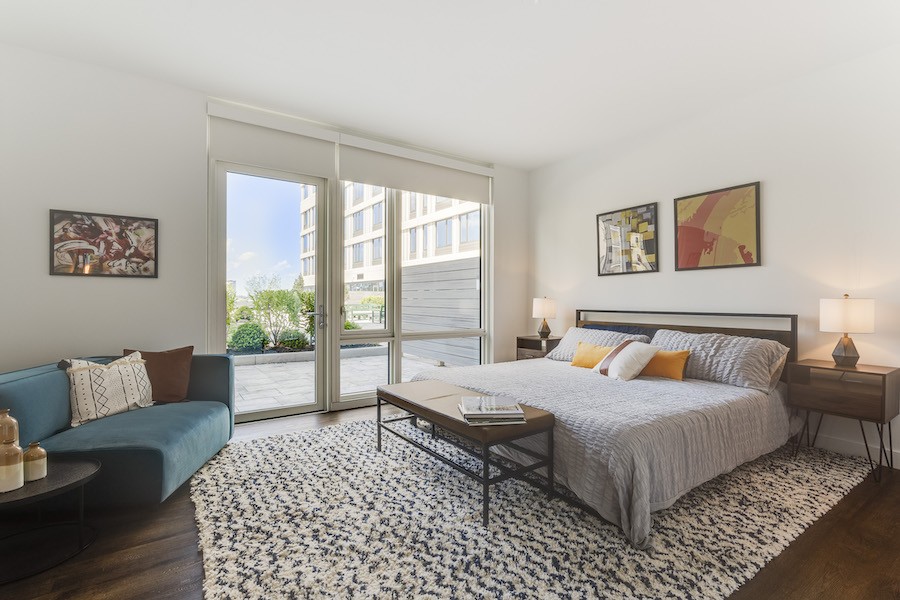 The climate control system in the apartments is also unusual. When the air conditioning is working, “it’s dead quiet,” says Levine, because the compressors for all the units are located in a shared compressor farm on the building roof. “The way that it works is that [the compressor farm control] actually computes your usage, and it’s billed as part of your monthly rent.”

So is each unit’s electric usage: again, the building gets a single bill from Peco for its total usage, and the building’s power management system calculates what each apartment has used and folds it into the monthly rent bill.

Another added convenience: All the apartments are already wired for both Xfinity cable TV and Internet and Verizon Fios, so you get to choose your digital-TV and Internet provider. And should you choose Xfinity, you can be online on move-in day thanks to a Comcast program called Wi-Fi Ready that RAL agreed to offer. Through this program, Comcast has pre-installed routers throughout the building, and all a tenant has to do is call a Comcast customer service representative to have their Wi-Fi service switched on. (Getting your TV service set up, or getting connected to Fios, still requires a visit from a technician.)

The one piece of the community puzzle that still remains to be fitted in is the tenant for the remaining retail space. Levine was unable to offer hints as to who might occupy it, but, he says, “it’s important to us that … the user of that space fit into the overall program of the building.”

From conception to finish, RAL has viewed Broadridge as not just a luxury apartment building. From the pre-construction consultations with near neighbors that led the company to design the project around a supermarket to its funneling job openings to North Broad Renaissance, whose board it will join, in order to hire locally as much as possible, RAL has made major efforts to make this project as beneficial for its neighbors as it is attractive to its residents. “The RAL team also believes Broadridge has accelerated development and improvements along the North Broad corridor,” says spokesperson Francisco Miranda.

Updated Aug. 30th, 4 p.m., with additional photos and material about the screening room.