Construction, sales volume, prices and rents all rose after the COVID shutdown, according to the latest Center City District housing report. Affordability, however, became more of an issue. 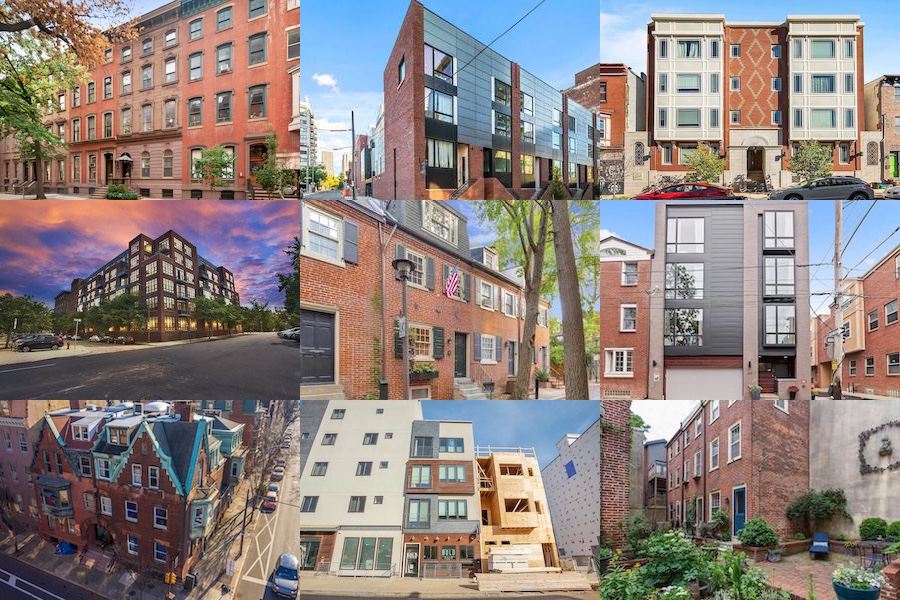 These are a few of the houses and condos in Greater Center City that have been featured for sale on our Real Estate & Home channel since the lifting of the pandemic lockdown in May 2020. Most of these have sold or gone under contract since we featured them, reflecting the continued strong demand for housing in Center City and environs. | Montage of Bright MLS and agent-supplied images

An increase in housing prices, low interest rates, and a surge of new construction — exceeding last year’s levels — are a just few of the accomplishments outlined in this year’s Center City District (CCD) annual housing report.

The 17-page report, titled “Building on Resiliency,” offers glowing testimony to Philadelphia’s ability to rise from the ashes of the COVID-19 pandemic and a stark reminder of the economic disparities riddling the city’s housing market.

In 2020, developers secured permits for 3,842 new housing units in the Greater Center City area, fewer than the number issued in 2019 but the third-highest of the past 30 years. By December, housing construction, home sale prices, and rents had returned to pre-pandemic levels. And while Greater Center City takes up only a mere six percent of Philadelphia’s overall land area, it accounts for 27 percent of the total new units built citywide in 2020.

This made Greater Center City — defined by the CCD as encompassing the neighborhoods from Girard Avenue on the north to Tasker Street on the south between the two rivers — one of the fastest-growing sections of the city. But in terms of new housing construction, it was actually eclipsed this year by the areas to its north and south — neighborhoods like Sharswood, South Kensington, Fishtown, East Passyunk and lower Point Breeze. 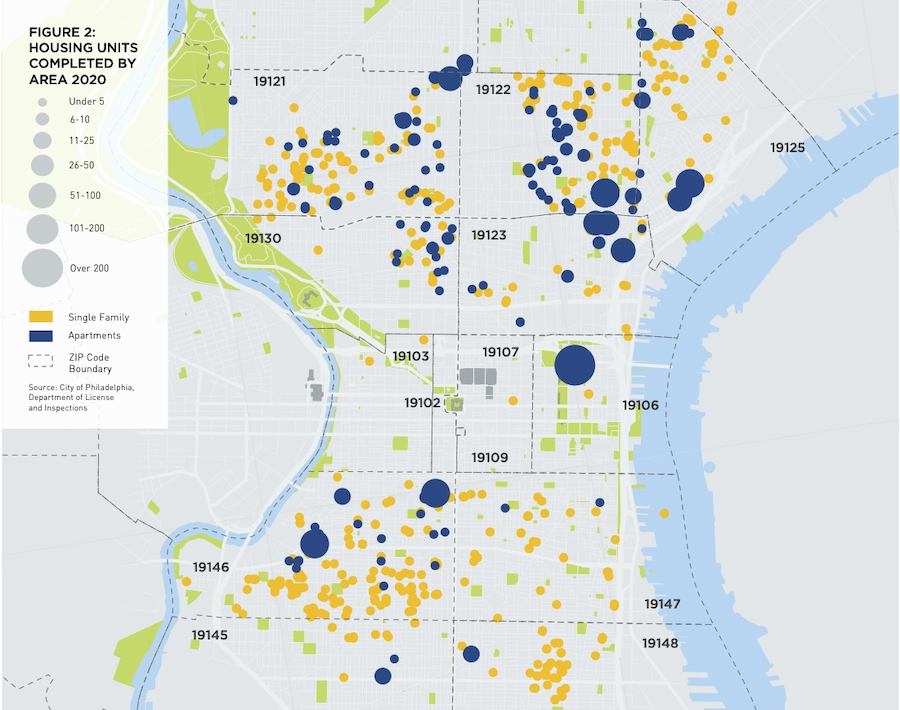 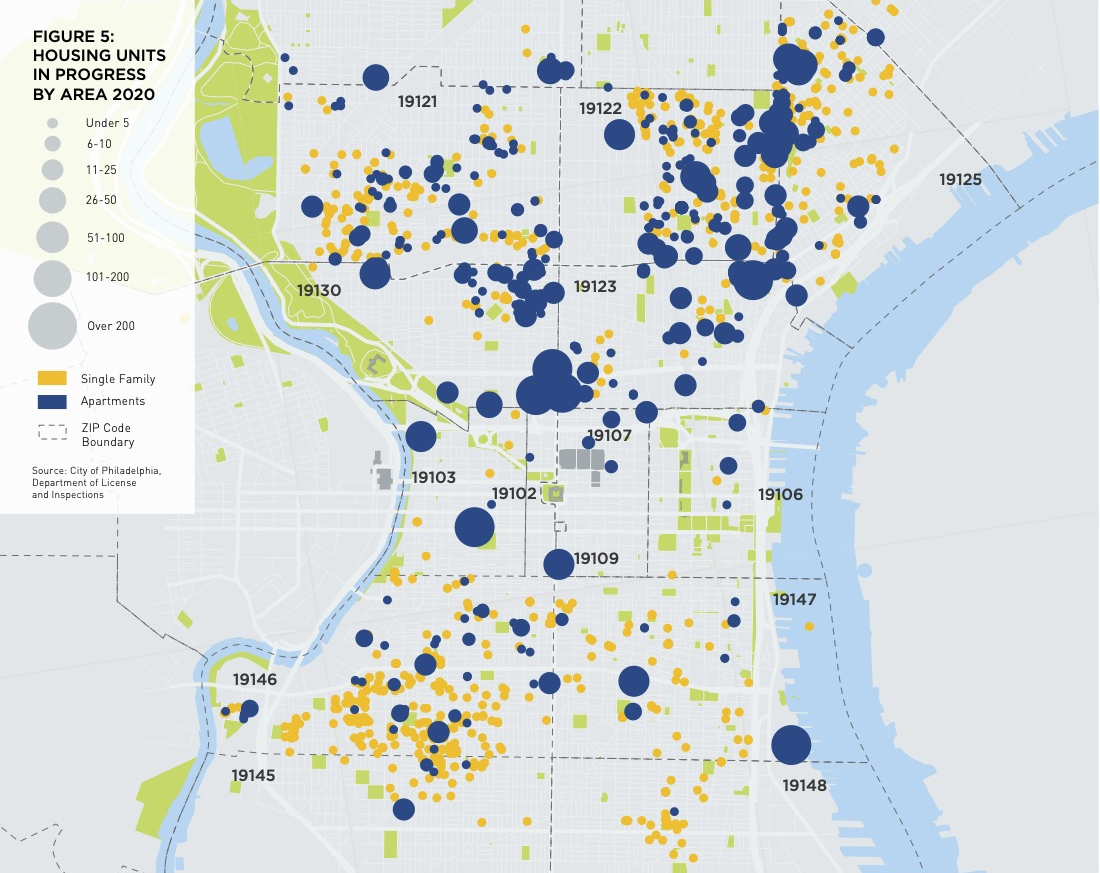 Map showing number, location and type of units currently under construction as of the end of 2020

Home sales were also disrupted by pandemic safety guidelines. After staggering in the first and second quarters, the market quickly recovered as potential buyers were allowed to leave their homes under less-strict health and safety guidelines. By the end of 2020, more new units were under construction in Greater Center City and the adjacent areas than there were at the end of 2019.

A review of data collected by Zillow also shows an increase in average asking rents. In the “extended Center City” zip codes, immediately to Center City’s north and south, they rose from $1,785 to $1,815 between 2019 and 2020. The zip codes beyond Greater Center City to the north and south saw a very slight increase of less than one percent, with rents rising from $1,380 to $1,397. Those looking to move into Center City proper, on the other hand, saw average asking rents drop by one percent, from $1,902 to $1,883. 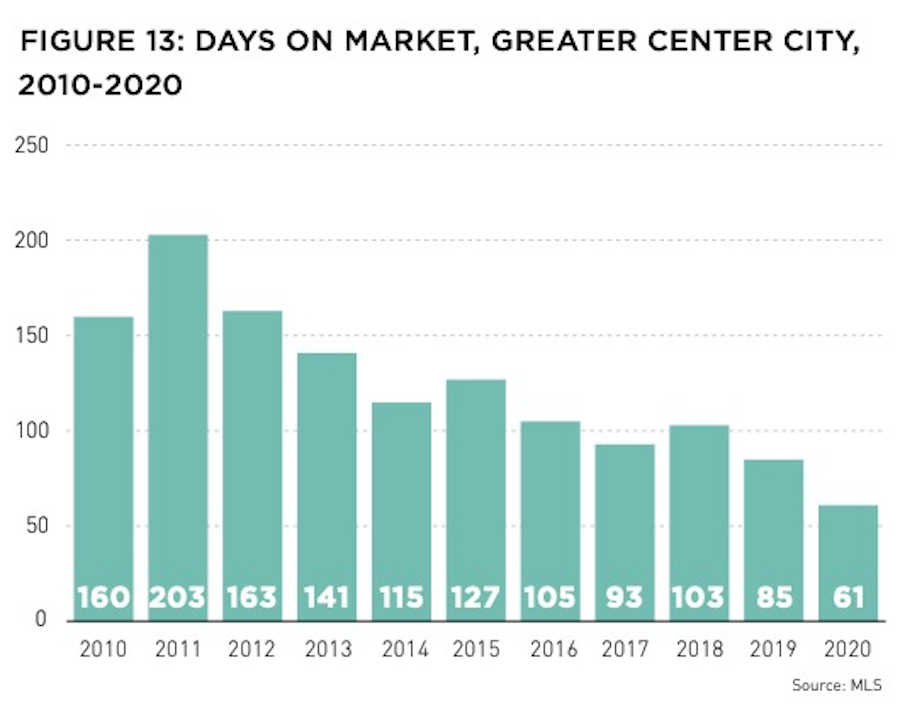 Average days on market for listings in Greater Center City, 2010-2020

The report indicates that while growth was strong in some area, many Philadelphians still face the difficult task of finding and securing “family-sustaining jobs.” In 2019, 38 percent of Philadelphia households paid at least 30 percent of their total income on rent; these households are considered “rent-burdened” under federal guidelines. When compared to other large U.S. cities, Philadelphia ranks below markets like Memphis and Detroit for housing affordability.

“The economic downturn caused by COVID-19 has exacerbated the challenges faced by many low- and moderate-income Philadelphia households and the long-term challenge, present before 2020, remains unchanged: too few Philadelphia households have income sufficient to afford housing available in their communities,” CCD President Paul Levy says in a press release. 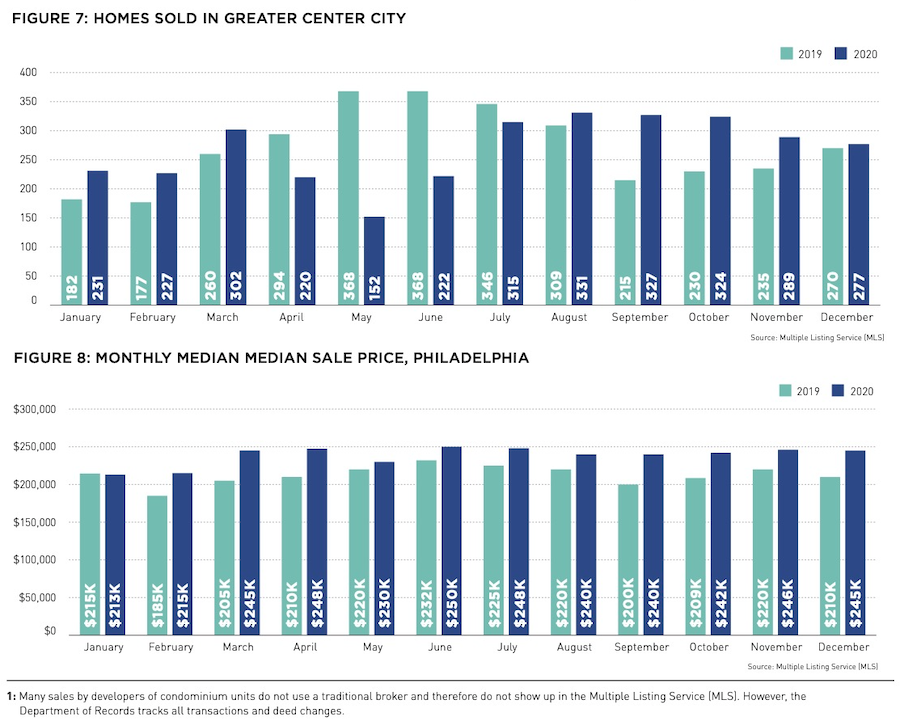 Number of sales and median sale price by month, 2019 and 2020; the top table shows the effect of the pandemic lockdown and its lifting on home sales in Greater Center City

The pandemic resulted in a loss of 100,000 jobs citywide, nearly crippling Greater Center City, where 42 percent of all job opportunities in the city are located. The biggest job losses, up to 45 percent, occurred in the leisure, hospitality, and restaurant and foodservice industries. These lower-wage jobs often require face-to-face interactions and are typically not held by Greater Center City residents. Compared to other sections of Philadelphia, residents in the core of Center City are more likely to have obtained a college degree and have median household incomes 54 percent higher than the overall city average.

The topic comes up year after year: Many Philadelphians cannot afford to live in Philadelphia. The sudden economic downturn caused by COVID-19 has exacerbated problems city residents faced in the pre-COVID era. The report offered several strategies to address some of the issues mentioned, including:

Updated April 3rd, 2021, at 6:06 a.m. to correct the percentage of jobs citywide located in Center City. The original version of this article reported that figure as 27 percent.