Dine Out at the Supermarket? You Can at the Huge New Giant Riverwalk

With wine and beer on tap and huge windows overlooking the Schuylkill, the “gathering place” at Giant’s first full-size big-city store aims to give people one more way to make dinner easier. 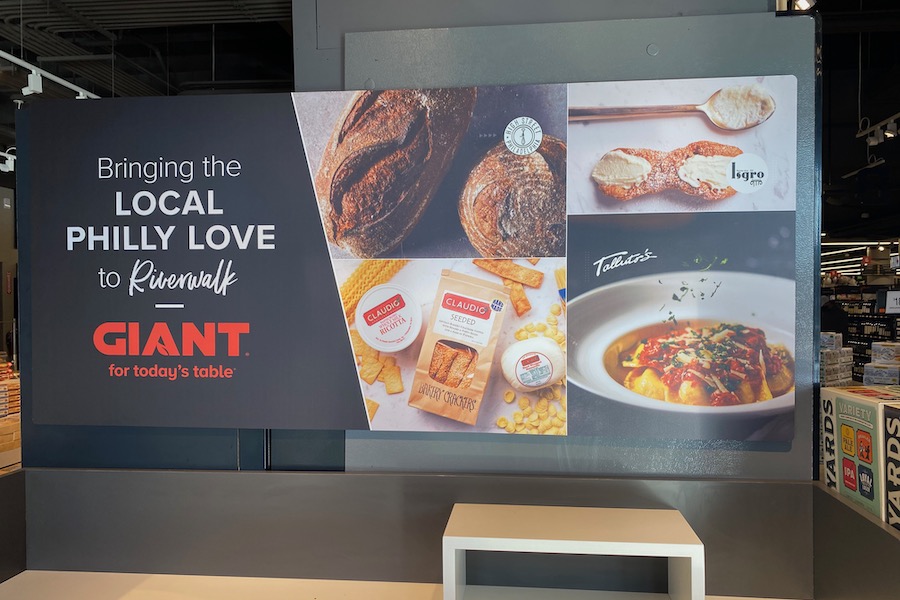 The management at the new Giant at Riverwalk say they “want to be in Philadelphia 100 percent.” One of the ways they show it is through showcasing many of the region’s finest food producers. | This photo and all photos with asterisks: Sandy Smith; all other photos courtesy The Giant Company

“The world is a better place when families come together at their table and connect over a meal, no matter where that table may be.”

—from  The Giant Company’s promotional copy explaining its current motto, “For Today’s Table”

That’s a wonderful sentiment, and The Giant Company has spent nearly a century catering to those families, all of whom live in suburbs, small towns and small cities.

Up until recently, that is.

With the opening of the 65,000-square-foot Giant at Riverwalk store in Logan Square Friday (March 19th), the Carlisle-based supermarket chain aims to bring city-dwellers whose lifestyles resemble Friends more than the suburban settings of Modern Family together at their table too.

And if at all possible, that table will be located right inside this store, looking out on the Schuylkill.

According to Paul Madarieta, The Giant Company’s director of urban retail, Giant at Riverwalk marks a major shift in strategy for the company. It began, however, when Giant opened three Heirloom Market stores in Graduate Hospital, University City and Northern Liberties. Madrieta says the company learned what city customers want from its experience with the small-format Heirloom stores.

“What we had done with the Heirloom stores was push innovation, push a different way of shopping,” he says. “Thinking about adjacencies and how you pair experiences. Our learnings from that helped inform what we have tried to do here.”

One of the things Giant learned from talking to their potential customers is that urban shoppers see themselves as incredibly busy. One of the things they want from a supermarket, Madarieta says, is at least one less meal to worry about. Quality and variety of produce, help with meal planning — things that make putting dinner on the table easier matter a lot. 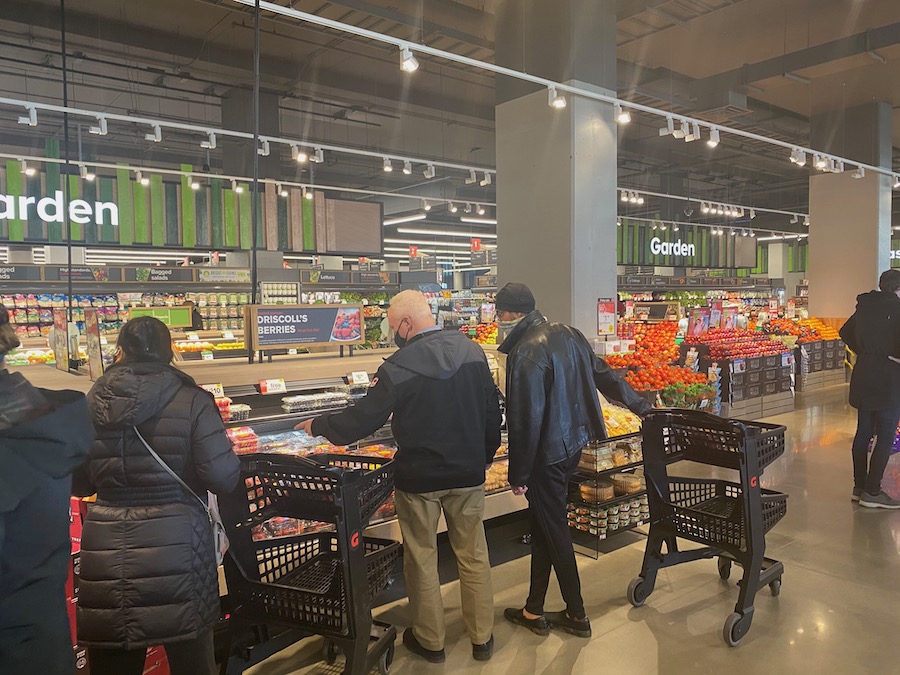 Everything about this store is bigger than usual, including the produce section*

Thus this store’s produce section is huge. It’s also set off from the rest of the store via a divider wall between it and the inner aisles. Chute Gerdeman’s design for the store seeks to guide the shopper from the produce into the rest of the store via a thematic tie of sorts: one moves from the produce on the store’s north side to the plant-based proteins at the section’s far corner to the animal-based proteins that line its east wall. The service meat and seafood counters are at the far end of the meat cases, forming the hinge that takes shoppers into the frozen-food section along the store’s north side. 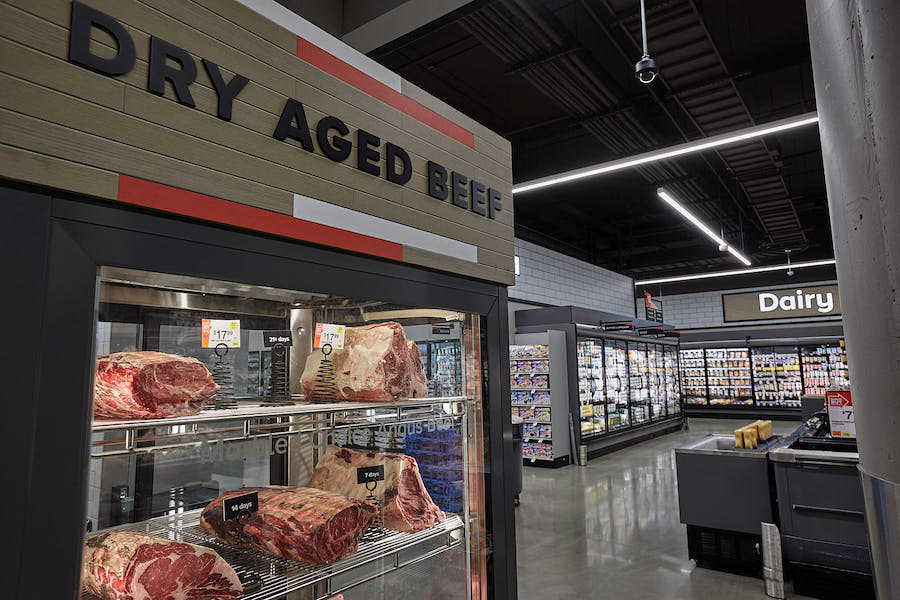 The frozen-food cases end at the deli counter, which in turn is next to the specialty cheese cases. Beyond those lie the in-store bakery. Next to it is the indoor seating area, with the wine and beer section next to the deli, cheese cases and bakery. 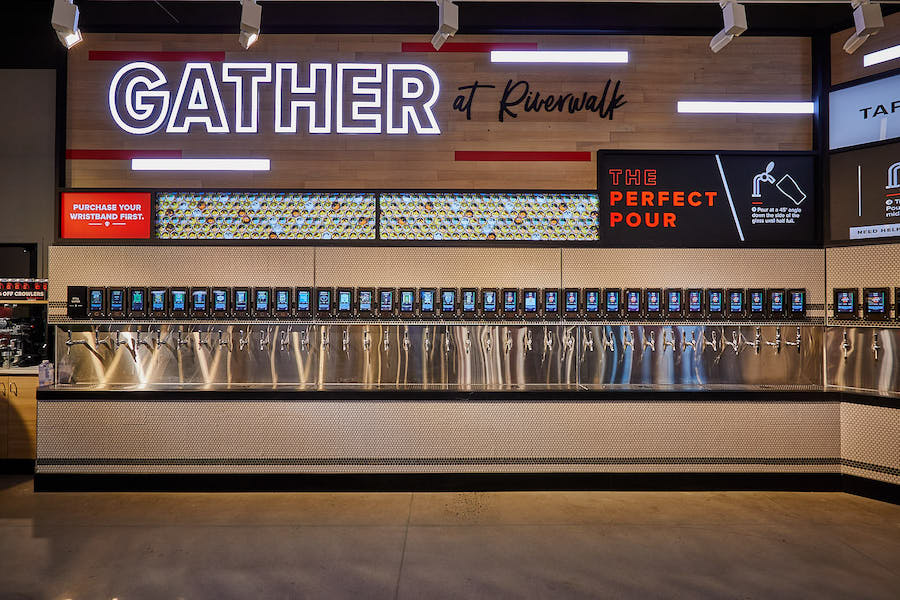 At the south end of the seating area is the tap wall featuring 30 beer and 10 wine taps, plus taps for orange juice, cranberry juice, still and sparkling water. Heading back into the rest of the store from here, shoppers enter the food hall, where they can choose from Mexican fare from Mission Taqueria, plus pizza, hot foods, sandwiches and hoagies, salads from Saladworks and sushi from Hissho Sushi. Wristbands to operate the beer taps are also sold here. 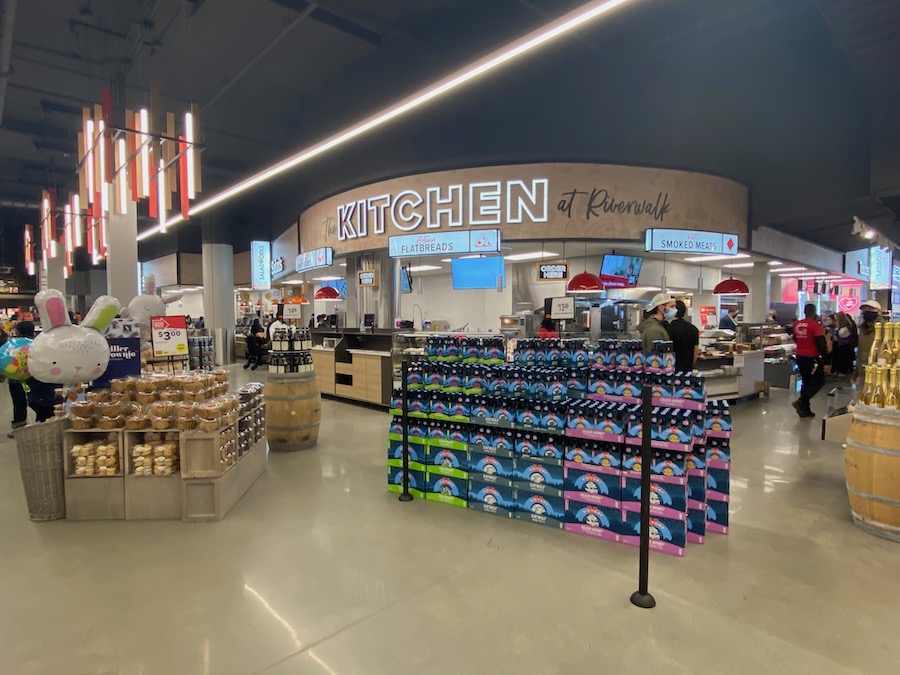 All of the food hall is covered by the store’s beer and wine license; poles mark off the licensed area. This allows the store to display wines and beers next to the foods they are meant to accompany*

Those who want something to eat right away can skip the trip around the racetrack, walk past the kombucha taps in the produce section and head right into the food hall. 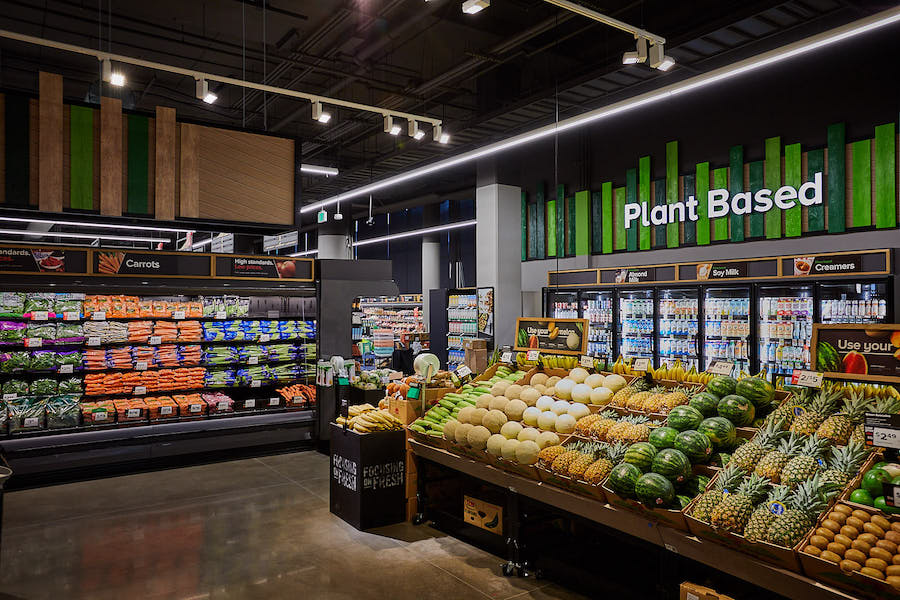 What Giant sought to do with this store was create a series of stores-within-stores. The shoppers Madarieta and his team spoke with said they wanted smaller, more manageable stores. “They wanted a smaller Whole Foods, or a Trader Joe’s,” he says. “They didn’t want a traditional grocery store. They didn’t want long aisles.” 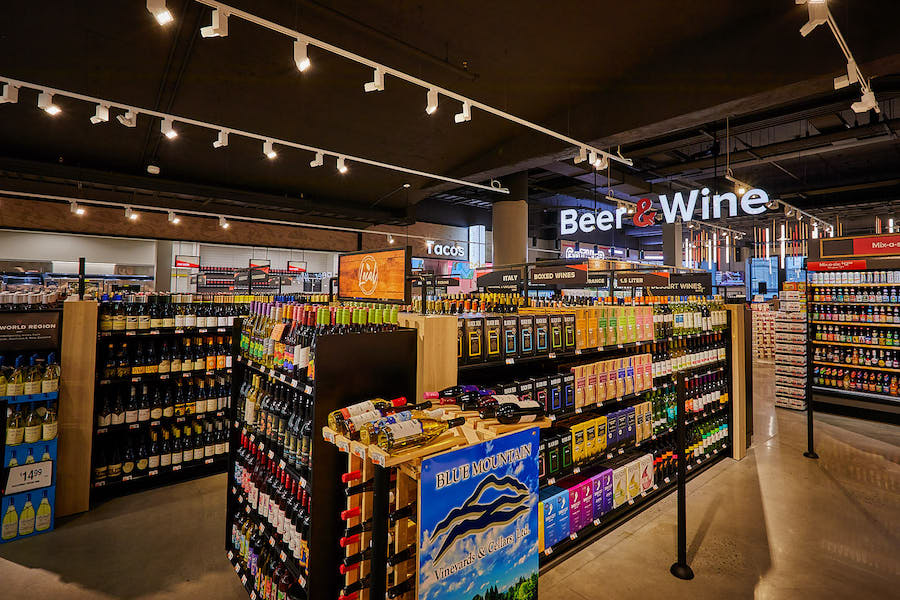 Because Giant has its own wine merchant doing the sourcing, you will find wines here that the Fine Wine & Good Spirits stores don’t carry*

And clearly the company took cues for this store from nearby stores like the Trader Joe’s two blocks east and the Whole Foods Market five blocks north. The food hall and seating area will probably remind some of that Whole Foods, for instance. So will the variety of specialty items the store carries, from the dry-aged beef at the meat service counter to the DiBruno’s and Claudio’s cheeses to the Talluto’s pasta to the High Street artisan breads to the Mission Taqueria and Saladworks branches in the food hall. 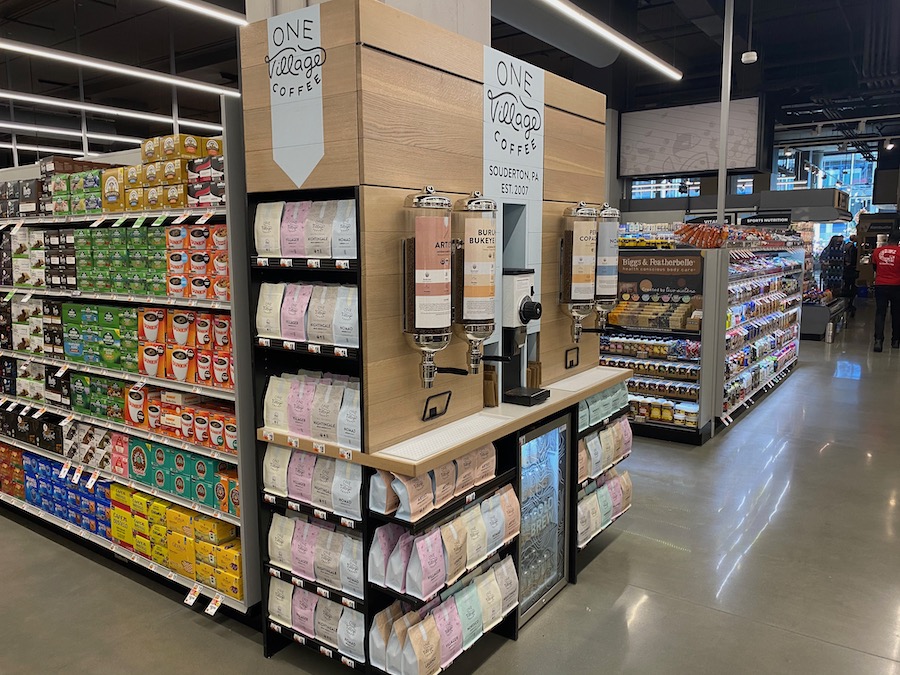 That heavy emphasis on local flavor is also by design, says Madarieta. After avoiding Philadelphia for 98 years (save for one location in the Far Northeast), Giant decided when it opened the first Heirloom store that it wanted to go all in. “We want to be in Philadelphia 100 percent. That’s why we have so many local partners,” he says. And the store has local partners at the end of the line too: in addition to donating surplus food to Philabundance, the store also supports a startup charity called Sharing Excess. Founded by Drexel graduate Evan Ehlers, Sharing Excess does much the same thing Philabundance does by directly feeding homeless and undernourished individuals from what stores and restaurants didn’t sell.

Sharing Excess also gets the tips thirsty customers leave after pouring themselves beer or wine from the tap wall. Giant first tried an indoor beer garden at the two-level Northern Liberties store, and it proved such a hit that the company installed a bigger version here. The outdoor terrace will also have a tap wall; it will open when the weather gets better. 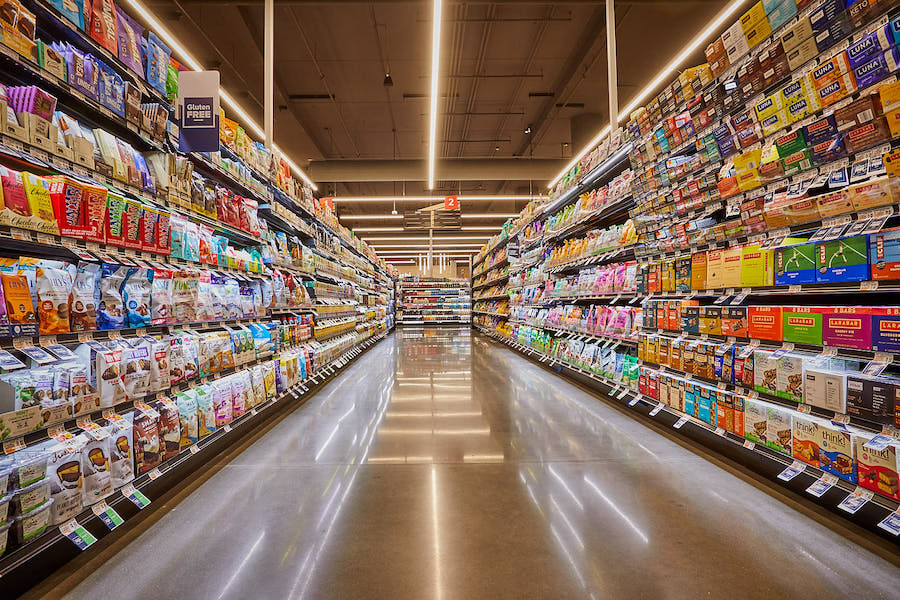 Jessica Fisher, a 22-year Giant veteran who was picked to manage the Riverwalk store, says in a news release, “I can confidently say that in everything we do, we aspire to deliver a grocery experience that inspires and excites our customers and to be a community partner that lifts up the families and neighborhoods we serve in every sense of the word — Riverwalk will be no different. I know I speak for the whole team when I say we can’t wait to return the warm welcome we’ve received and show our neighbors that we aren’t just another grocery store and that The Giant Company is a partner they can count on, and one that will grow alongside them.” 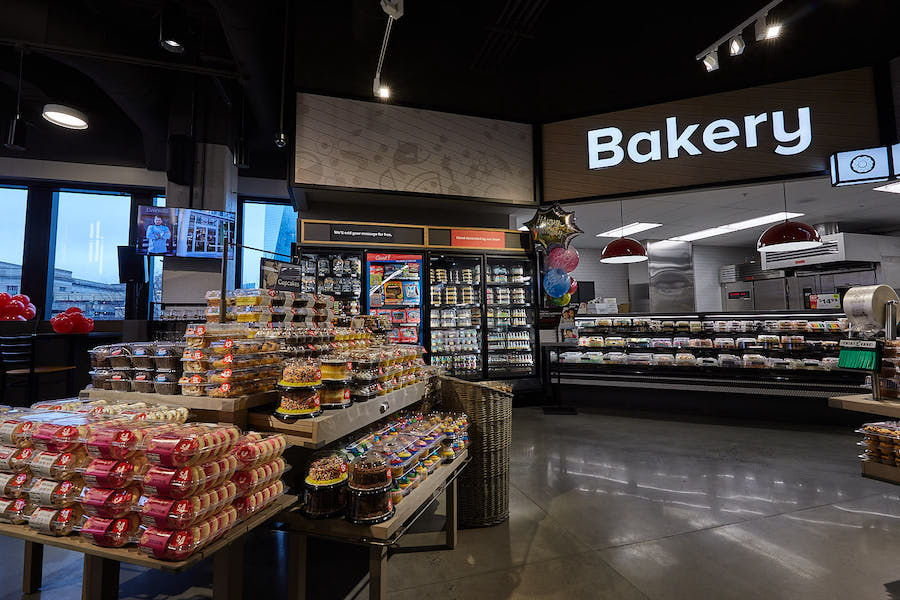 One other significant way Riverwalk will be no different from other Giant stores: Price. “We actually have the same prices here that we have out in the suburbs,” said Madarieta.

Giant Riverwalk shows just how far supermarkets have come since the days of Ozzie and Harriet. Today’s city supermarket has transformed from just a place to buy food to a community hangout as well. By adding comfortable seating, beer and wine on tap, and plenty of eat-here options to the aisles filled with ingredients, Giant hopes that Philadelphians faced with the choice of what to have for dinner will choose to have dinner out at the supermarket.