During COVID, We Moved Out of Our Fishtown Rowhouse Into a Rural Farmhouse

After years of urban living, Antoinette Marie Johnson and Erik Oberholtzer found a happy medium on a farm halfway between New York and Philadelphia. 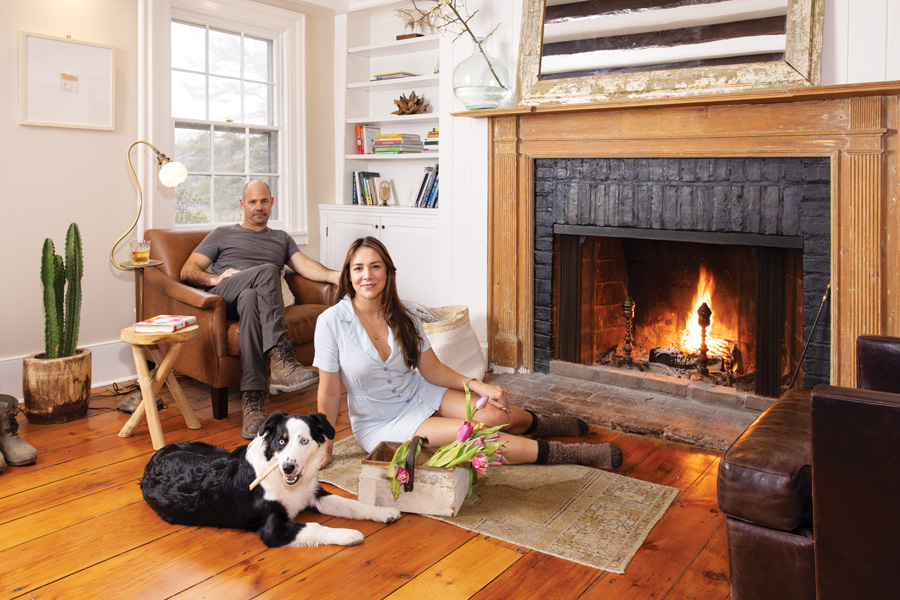 This couple moved from Philly to a Princeton farmhouse. This fireplace, which is part of the original structure, dates back to 1737. Not pictured: a second fireplace on the opposite wall. Photograph by Colin Lenton

Antoinette Marie Johnson is a Philly girl with a love of cities. Erik Oberholtzer is a bicoastal chef with a love of authentic food. After years of urban living, they decided they needed a place where they could grow their own food — and chose a logical spot for it.

Where they came from: A renovated Fishtown rowhouse

How they got there: When the two paired up in 2019, they left their respective cities and settled in New York. Then, in 2020, Oberholtzer suggested they relocate to Philly, where Johnson owned a home in Fishtown that she had bought and renovated in 2016. She had lots of connections here, and he was starting to make connections of his own. But several months in, they got the urge to move again.

Oberholtzer has a brother who lives on a farm, and the couple was spending increasing amounts of time there, growing flowers and hemp. Johnson recognized that she needed to get out of Fishtown when, at a weekly meeting at her company, someone posed the question: “Where’s your unexpected joy coming from?”

“I realized that mine was coming when I was driving to the farm,” she says; it’s where she sourced flowers for her company’s floral business.

Why they chose to live where they live: The couple originally planned to buy a farm in Pennsylvania, but a visit to the Hortulus Farm in Wrights­town when it was up for sale got them thinking about New Jersey. They ended up buying Stone House Farm, on the Hopewell Township side of the Hopewell-Princeton line, for the same reason Prince­ton University is where it is: It’s equidistant to both Philadelphia and New York. Johnson and Oberholtzer will commute from here in opposite ­directions — she to her branding and production firm in Callowhill, he to his restaurant group in New York. “The proximity to the two cities plus the supportiveness of the surrounding community made it ideal,” says Oberholtzer. “I also think having two streams and a pond is nice.”

Biggest surprise: Even after factoring in New Jersey’s higher property taxes, they’re getting a really good deal on a much more spacious place than their first home together: They’re paying about $4,600 per month, including taxes, on a 2,200-square-foot house and the 11-acre farm surrounding it. In Brooklyn, Oberholtzer says, “We were paying $6,500 a month for a view of a brick wall and a razor fence.” (“But it was a nice place,” Johnson adds.)

Published as “From City Townhouse to Country Farmhouse” in the “On the Move” feature in the March 2021 issue of Philadelphia magazine.