Health and wellness coach Renée Womack decided to move out of her parent’s home in Lansdale and into a twin home on Ridge Avenue in Wissahickon. 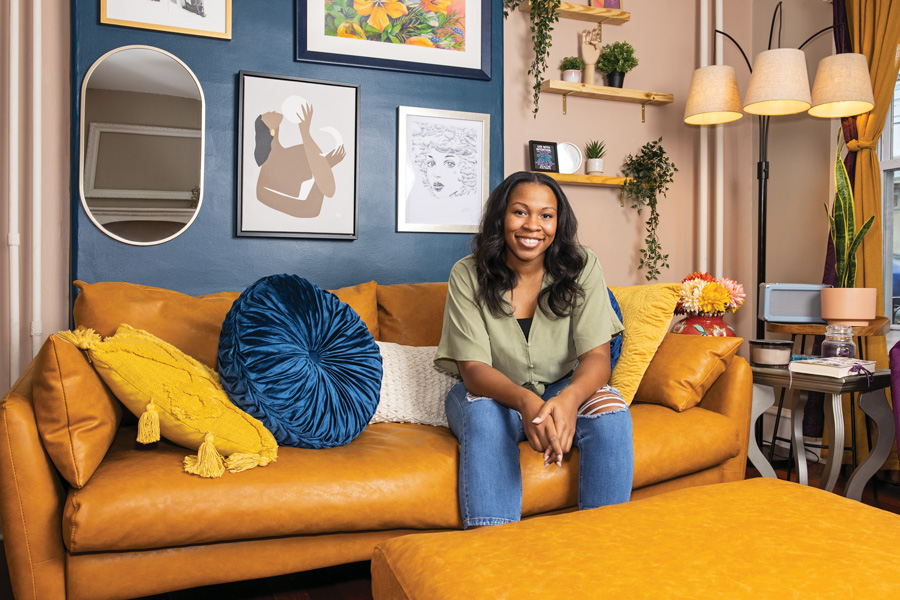 First-time homebuyer Womack wasted no time creating an inviting space in her home. Much of the art was made by family and friends. Photograph by Colin Lenton

Health and wellness coach Renée Womack decided she’d been living with her parents long enough when COVID hit. She used the occasion to find a place in the city, where she’d longed to live.

Where she came from: Her parents’ home in Lansdale

Where she landed: A twin home on Ridge Avenue in Wissahickon, purchased for $239,000

How she got there: After graduating in 2018, Womack returned to her hometown of Lansdale, where she planned to live with her parents for two years while she got her career off the ground. The two years became four because, as she puts it, “My parents were the best roommates I ever had.”

When it came time to move, ­Womack thought she’d rent an apartment while she decided on more permanent living arrangements. And she was almost ready to sign a lease just before her 30th birthday in March. Then the COVID lockdown shut down real estate activity, too.

She used the period of enforced idleness to follow Philly Home Girls on Instagram. “They were very informational in their posts,” she says. And when she compared monthly mortgage payments with her projected rent, “I was like, ‘Whoa. Maybe I should look into a home.’”

Why she chose to live where she lives: She had her sights set on the Roxborough/Manayunk neighborhoods from the beginning. “I really wanted to move to the area because it’s social and it’s walkable,” Womack says. “But because everything was essentially shut down, it made no sense to move there just to stay in quarantine.” While homebound in Lansdale, she kept in touch with agent Kate Kyle of Philly Home Girls, who answered her questions about buying and showed her houses that might meet her needs. She found her perfect place in the neighborhood that hugs the side of the hill between East Falls, Roxborough and Manayunk.

Biggest surprise: Her parents’ home in Lansdale had a big backyard, and she was sure she would want one of her own. The two-bedroom twin she bought lacks one, and it turns out that’s fine with her: “My large backyard substitute is having those trails,” in particular the Schuylkill River Trail. That path serves as a “commuter route” of sorts: “I love going down to the Art Museum,” Womack says.

Published as “From Living at Home to First-Time Homeowner” in the “On the Move” feature in the March 2021 issue of Philadelphia magazine.