Graffiti Pier to Get 900 New Neighbors

Two developers who have already collaborated on two large local projects are about to top themselves with a 900-unit gorilla of a mixed-use development on a site that can’t be beat. 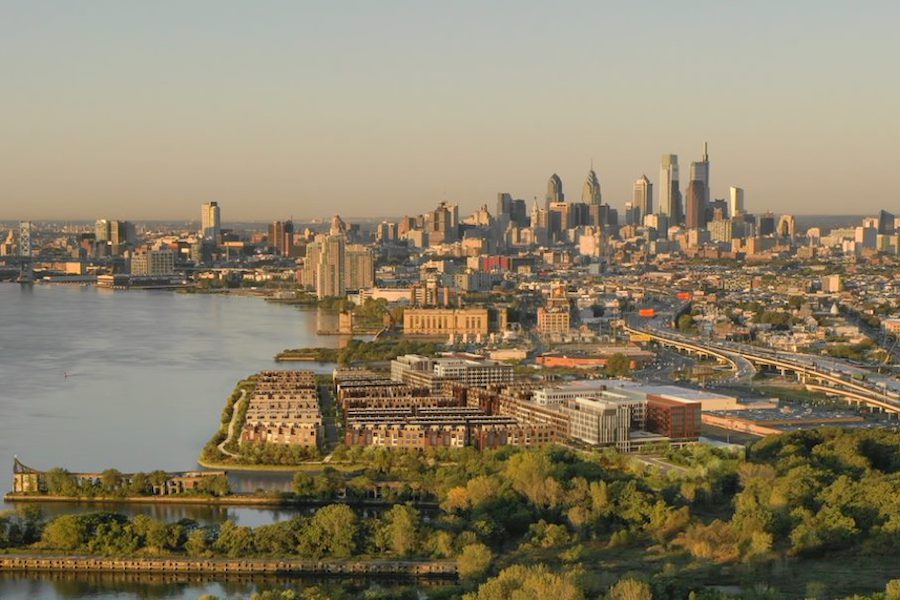 Located right at the end of an I-95 offramp and close to a Route 15 trolley stop, the huge Northbank development offers stylish, well-outfitted residences in a convenient location next to Graffiti Pier (foreground), close to both Fishtown and Center City, and right on the Delaware. | Renderings: D3 Developers and The Concordia Group; photos: Sandy Smith

When you return home from work at the end of the day, is the last thing you want to see before you get home this? 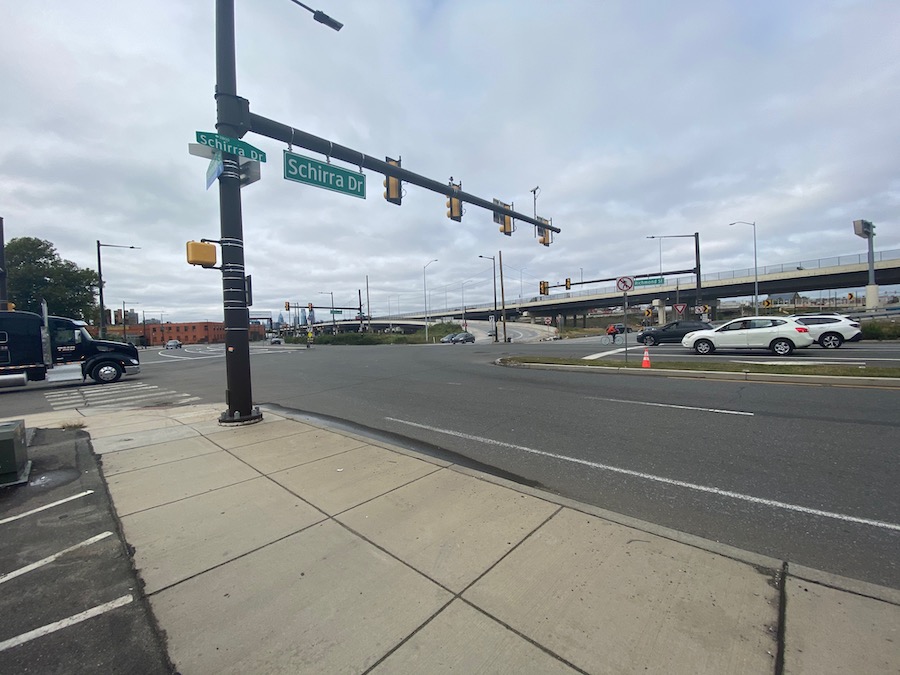 The offramp from I-95 at Richmond Street and Schirra Drive 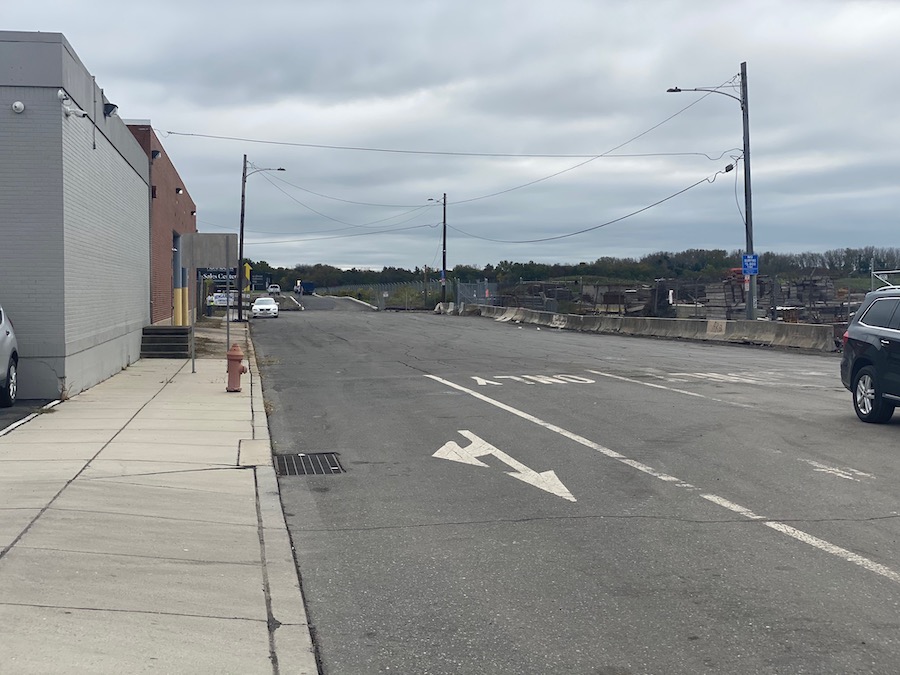 D3 Developers and The Concordia Group are betting that you will want to pass through all this on your way home, because once you get there, what you will see is this: 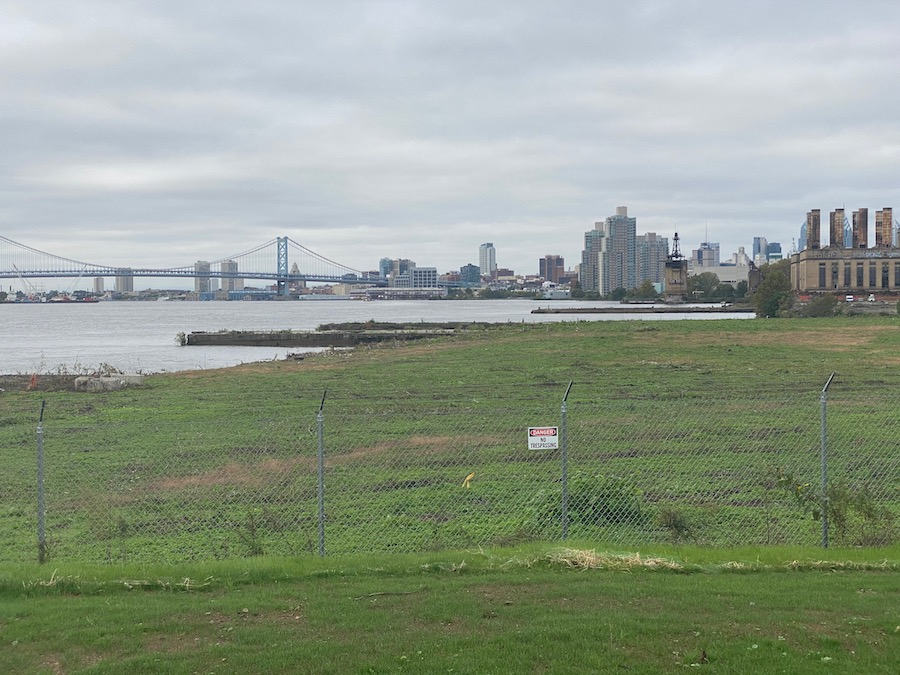 View of Center City from site 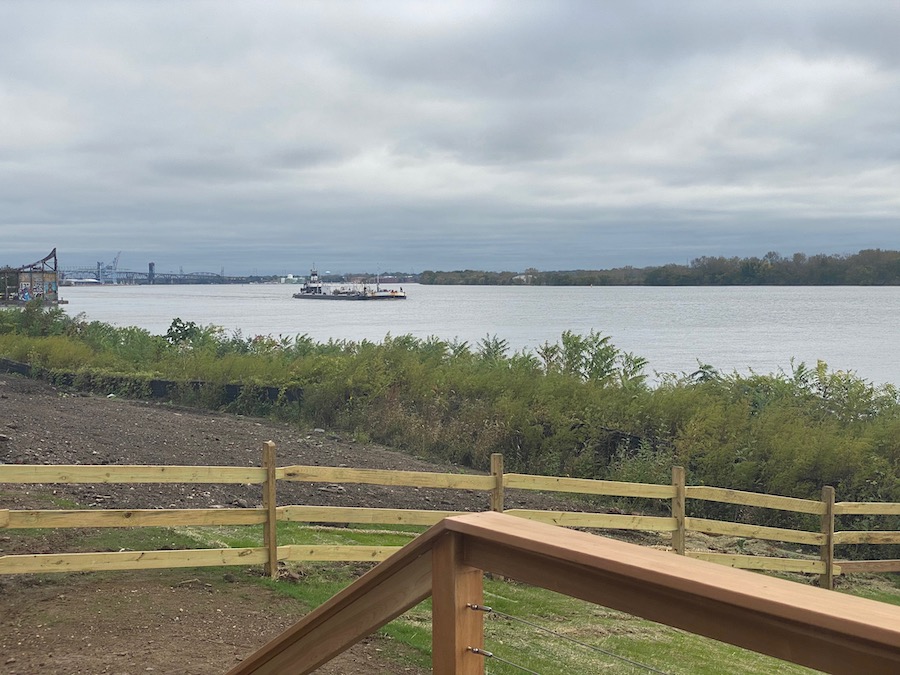 The Maryland-based Concordia Group and hometown firm D3 are now busy building what will be the largest residential development ever built along the Delaware and the second-largest ever built in the city, right next door to the storied Graffiti Pier on the Delaware riverbank. 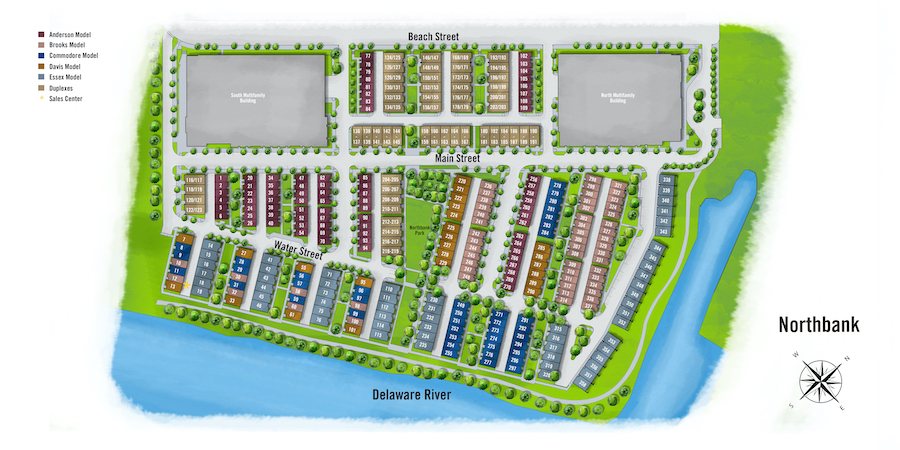 When finished about two years from now, the Northbank development will have a total of 900 residential units. The first phase, now underway, will bring 350 townhouse condominiums to the previously empty lot behind the building-materials dealer at Richmond Street and Schirra Drive. Two apartment buildings in the project’s second phase will add 550 rental apartments to the mix. That will make Northbank bigger than any other residential development ever built in the city save one: the 940-unit Park Towne Place apartment complex, built in 1957.

And in addition to those units, the project will have about 30,000 square feet of neighborhood commercial space.

Rendering of an end block of townhouses next to the riverside path. The units facing the pedestrian path are “Essex” models, while the corner unit facing the river is a “Davis” model

“It’s a 35-acre parcel,” D3 principal Greg Hill says of the tract off Beach Street the partnership acquired for this project. “That’s given us an opportunity to create a real community here, as opposed to infill development in an existing neighborhood. We really are creating a neighborhood in Northbank.” 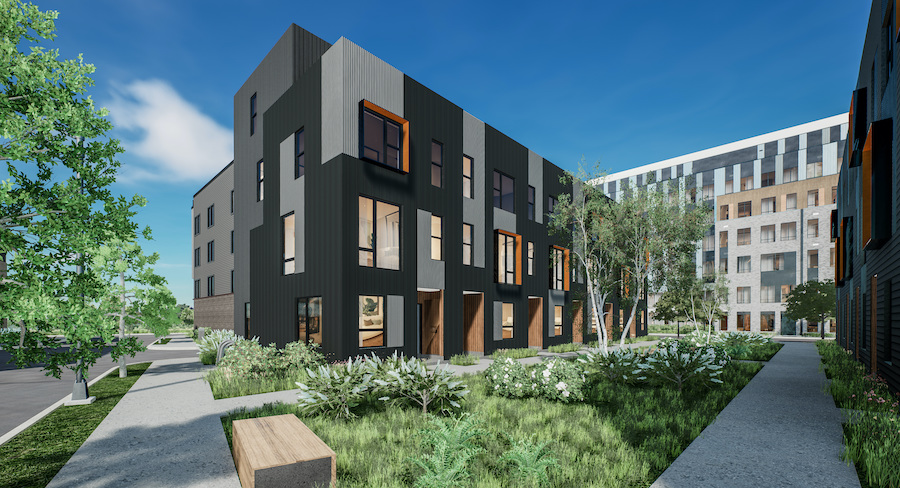 A row of “Anderson” condos is faced with metal panels of varying colors; one of the two apartment buildings terminates the pedestrian pathway

And judging from the renderings supplied by the developers, it will be an exceptionally well-designed and thought-out one. At its center will be a community park with about one acre of space, stretching from Beach Street through the site to the Delaware. A riverside promenade will also contain a walking and biking trail that will form part of the Delaware River trail the city and the Delaware River Waterfront Corporation have been slowly stitching together.

The trail will connect directly to the Graffiti Pier site, which  the DRWC recently acquired from Conrail with the aim of creating a new waterfront park. “We’re focused on the connectivity between our site and Graffiti Pier, and we view Graffiti Pier as a phenomenal amenity,” says Devin Tuohey, principal at The Concordia Group. “But we also believe our waterfront trail, which will be open to the public, will also be a great amenity as well.

“There just aren’t too many sites with this much waterfront access in the city, and we’re doing our best to open that up.” 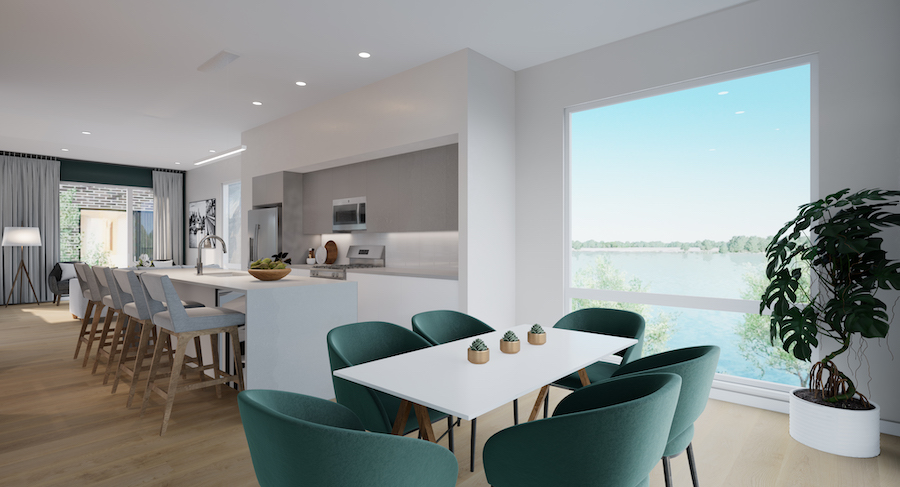 Dining area and kitchen in one of the higher-end units

The houses and apartment buildings themselves are the work of ISA, the South Kensington-based architectural firm known for its cutting-edge, envelope-pushing design. The project is actually on the tame side for ISA, but you can see the firm’s hand in the mix of materials chosen for the facades and the interplay between colors and forms on the exteriors.

While this is the first project the partnership has built that includes rental apartments, both partners have rental projects under their belts as well. One of Concordia’s is the conversion of the Abigail Vare School in Pennsport into apartments, now underway. One of D3’s signature rental projects is the critically praised Bridge on Race apartment tower at 205 Race Street in Old City. 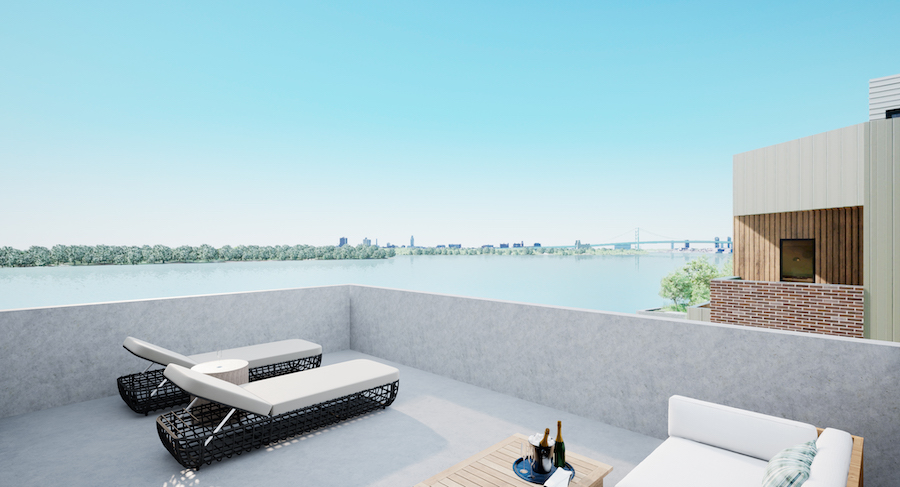 View from roof deck of a waterside “Essex” unit

The partnership’s two previous Philadelphia projects are Southwark on Reed, a 91-unit townhouse development on the site of the former Mt. Sinai Hospital in Dickinson Narrows, and The Locks, a luxury townhouse project on Venice Island in Manayunk.

The residences at Northbank will range from mid-priced to luxurious. The townhouses come in five basic models of increasing size and luxuriousness, with units in all five ranges distributed throughout the site; of course, the least expensive units won’t be located directly by the river, but buyers will be able to obtain  waterside units in the other four floor plans.

The developers say they’re filling a real need right now with these houses. “If you look at building projects in the city, the number of building permits that have been issued in the past few years, I’d say that 90 percent of them have been for new multifamily projects,” says Hill. “There just hasn’t been a lot of new for-sale supply hitting the market. So in creating this new neighborhood, we’re bringing a lot of supply to the market.”

The fact that the partnership’s two other projects, both of which were built within the past five years, sold quickly lends credence to Hill’s statement. 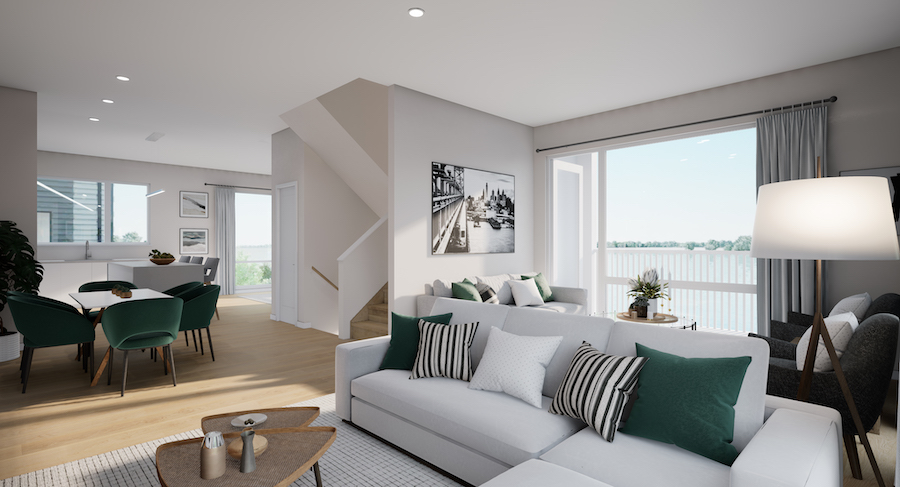 While the developers haven’t determined what the apartments will rent for yet, I wouldn’t be surprised if they priced some of the units within reach of those with more modest incomes. The Bridge at Race followed the spirit of the city’s affordable-housing incentives, gaining height and density bonuses for making 10 percent of its units affordable, and D3 also has to its credit two social-impact adaptive-reuse developments near this one. One, Oxford Mills, was aimed at teachers, and the more recent one, Huntingdon Mills, aims to offer social-services professionals affordable living spaces.

You will be able to drop seven figures on a Northbank unit if you load the top-of-the-line model with all the bells and whistles, but D3 and Concordia have their sights set on the broad middle of the market and have priced the townhouses and duplexes accordingly. In fact, some of the amenities offered in the pricier units are often not found at those price points. Like an elevator in a townhouse priced in the $800,000s. The partnership learned from their Manayunk project that buyers of the less-expensive units opted to have elevators put in them by a 90-percent margin.

“From a cost standpoint, it’s a $30,000 to $40,000 upgrade,” says Hill. “However, if you roll that into your mortgage, it’s not that much from a monthly standpoint.” As the developers see it, there’s a demand for moderately priced elevator townhouses that no one is filling right now, and they’re filling it.

The sales center, located right on the riverbank, opened Oct. 15th, and even though no actual units will be available to tour for a while, people can get an idea of what they will offer by visiting the center, and they can get an even better idea of what the finished product will look like by going on a virtual reality tour of the site and a model home when they visit. The first units should be ready for move-in next spring.

Northbank by the Numbers

Number of units: 900 total: 246 single-family townhouses ranging in size from 1,881 to 3,844 square feet, in five configurations; 104 duplex townhouse condominums and 550 one- and two-bedroom rental apartments.

Parking: All the single-family townhouses have either one- or two-car garages. Parking figures for the duplexes and apartments not yet available.

Duplex townhouse sizes and prices not yet available.

Apartment sizes, rents and pet policy: Not yet available.