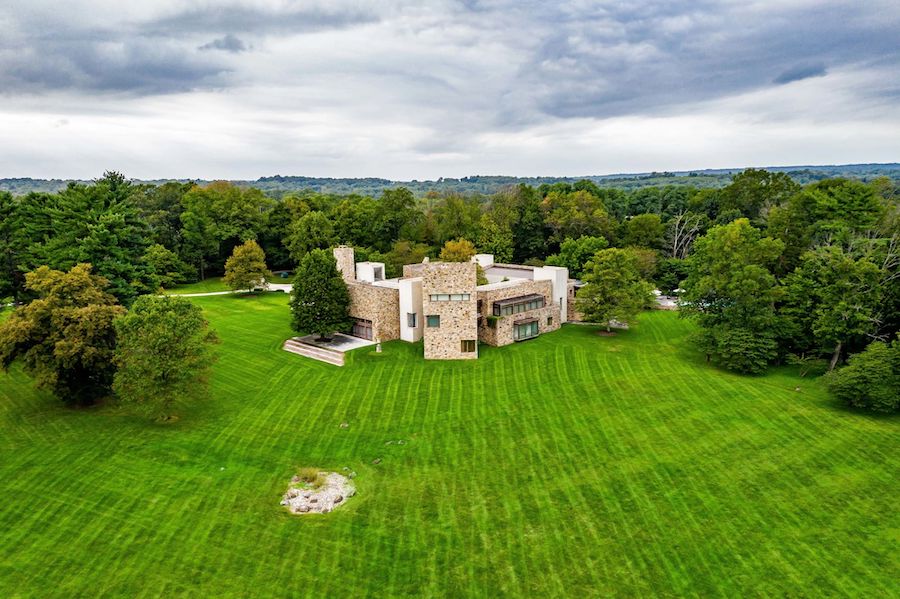 If Dennis Alter left anything out of his spectacular Fort Washington home, please tell us what it is before submitting your auction bid on 7111 Sheaff Lane, Fort Washington, Pa. 19034 | Photos: Natalie Cantrell, Concierge Auctions

I’m sure you do. After all, we’ve featured this huge modern mansion for sale in Fort Washington twice before — in 2017 and 2019. On each of those occasions, the house starchitect Rafael Viñoly designed for former Advanta Corp. CEO Dennis Alter was the most expensive house for sale in the Greater Philadelphia region, as it was when we mentioned it in a roundup of local celebrity houses for sale in 2012. (That wasn’t the first time we wrote about it, either: It got a cameo in our 2009 examination of Alter and the rise and fall of the company he led.) 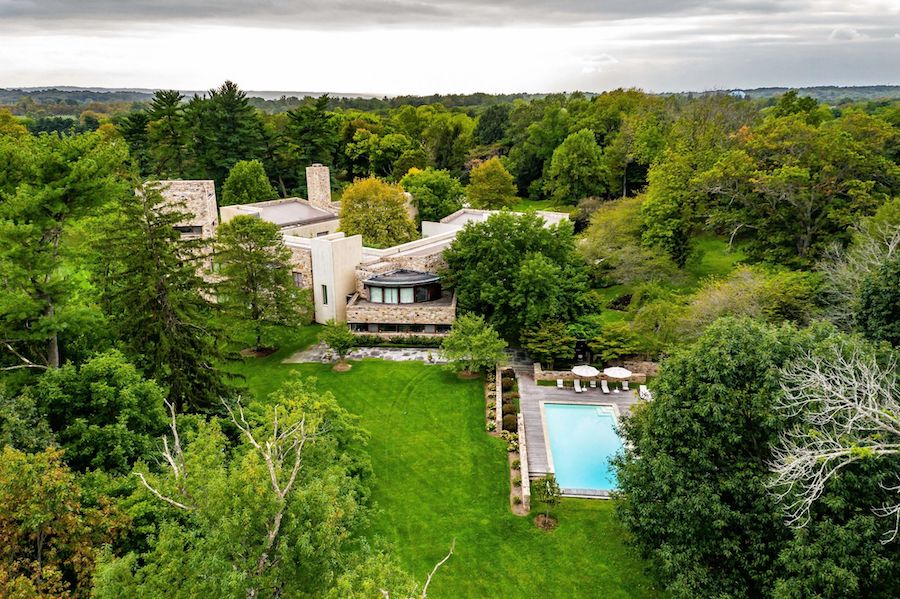 When we wrote our 2012 item not that long after it had been put on the market, its sale price had been reduced from $30 million to just $25 million, which was also its asking price in 2017. When we circled back to this house two years later, its asking price had been trimmed by another $3 million — but in that two-year interval, it had been on a roller-coaster ride, dropping to $10 million, then rising to $22 million, then falling again, then rising again, for a total of five such round trips. 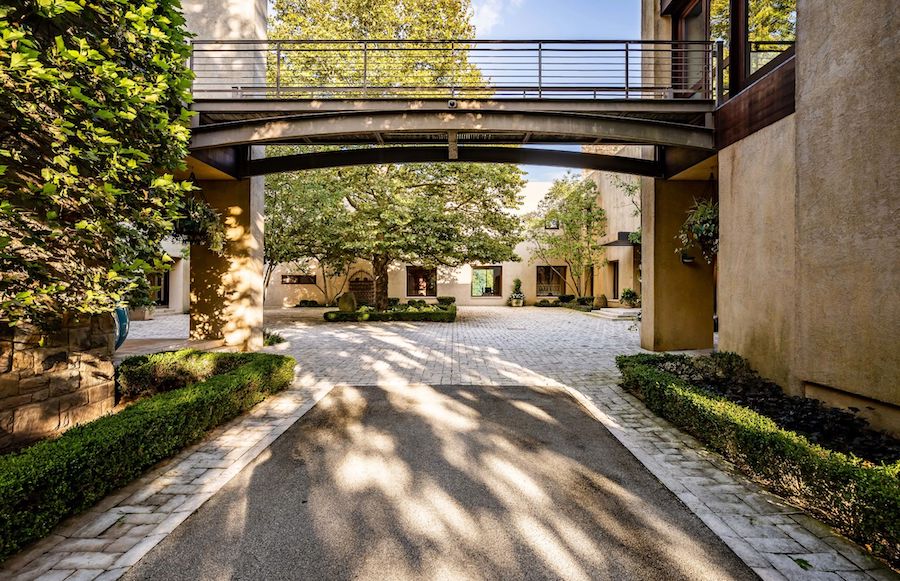 Alter has finally decided it’s time to stop the merry-go-round: Arbor Hill will be sold at auction. The auction will begin on Oct. 20th and run for the next two days. The asking price is $12 million with no reserve price set. 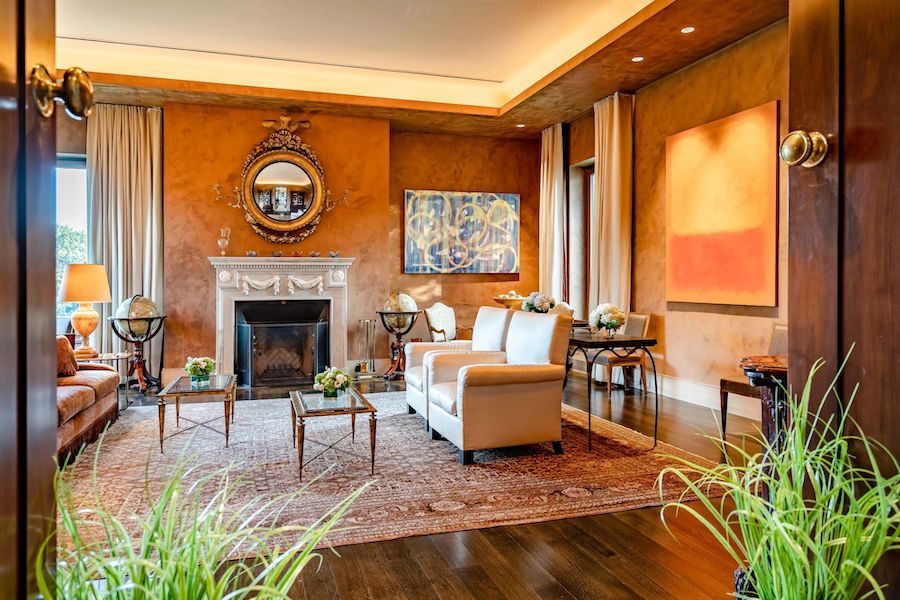 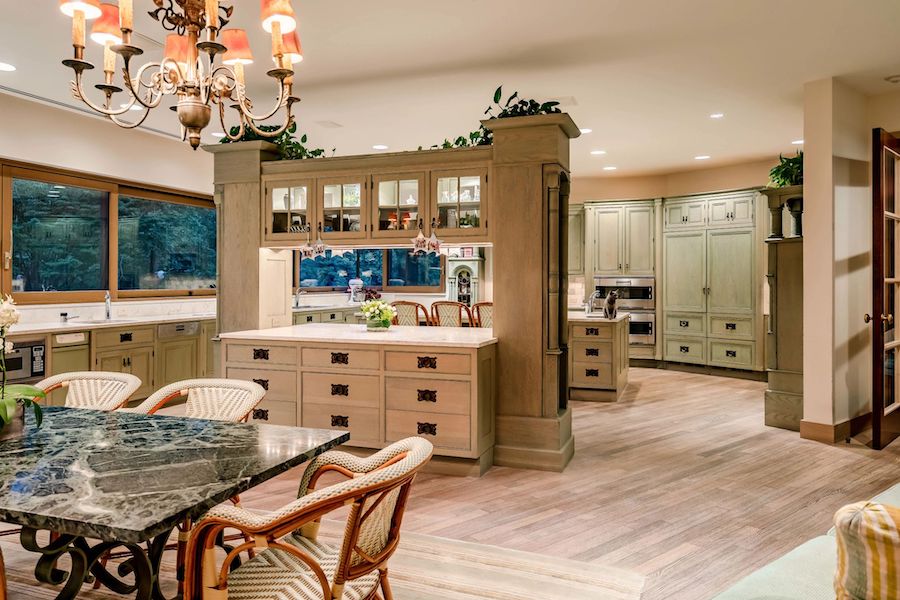 “I chose to partner with Concierge Auctions because of its expertise, vast reach, and accelerated time frame, all of which allows me to sell on my own terms. Today’s marketplace calls for a unique approach not just toward identifying buyers, but the right one, and I’m anticipating seeing my property sell to the perfect buyer on auction day,” Alter said in a news release. 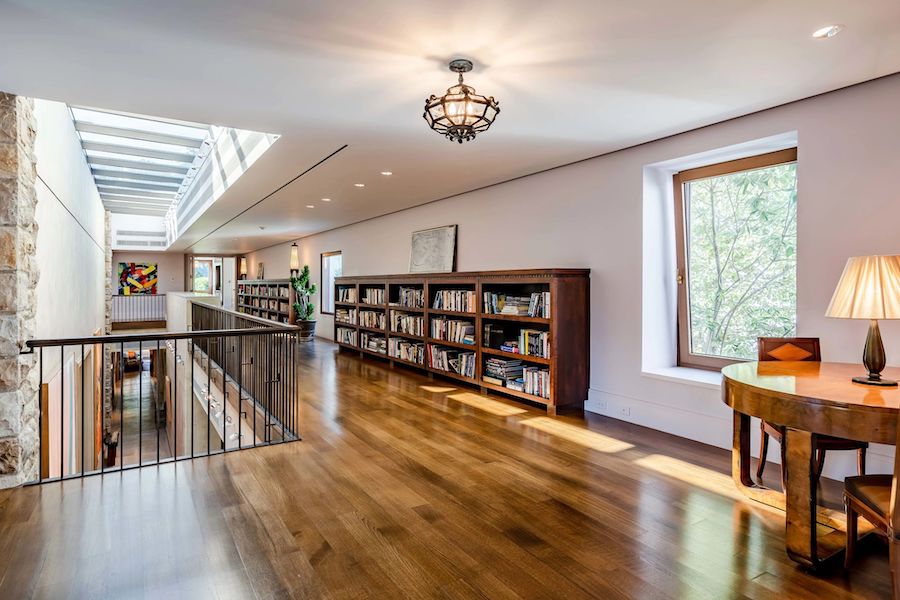 According to Concierge Auctions, “The Without Reserve format is known to create competition amongst bidders, ultimately allowing them to compete with each other based on where they see value, with no minimum price required for bidding to start. The property will sell to the highest bidder on auction day.” 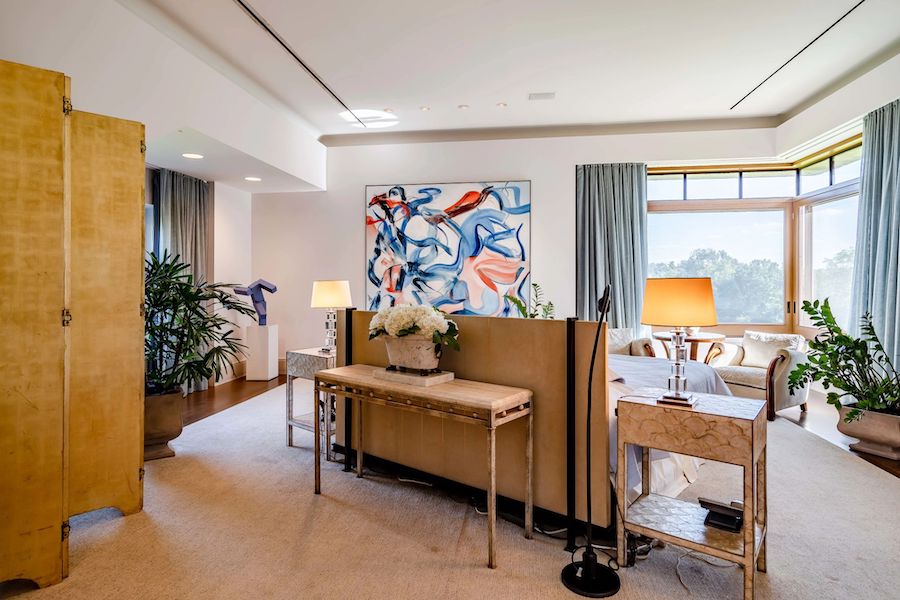 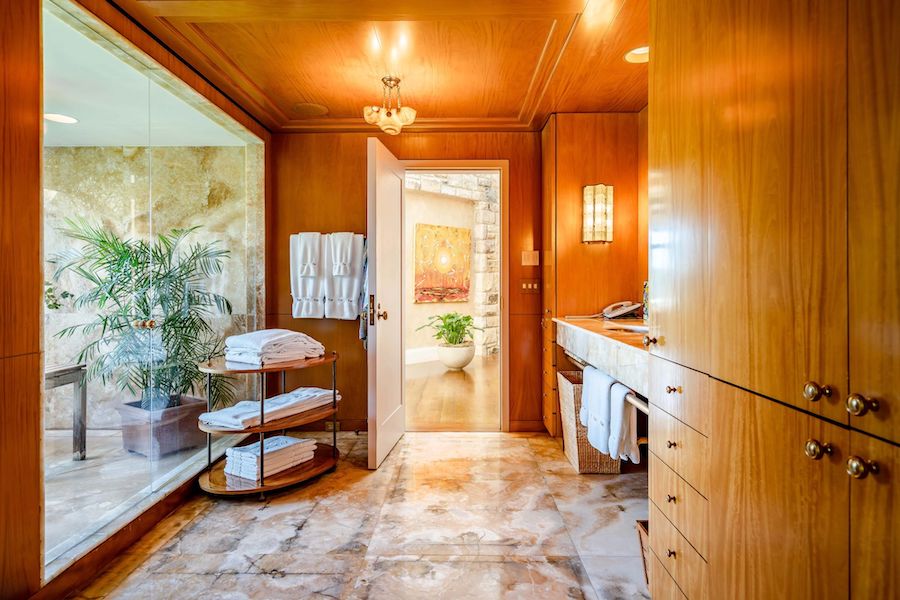 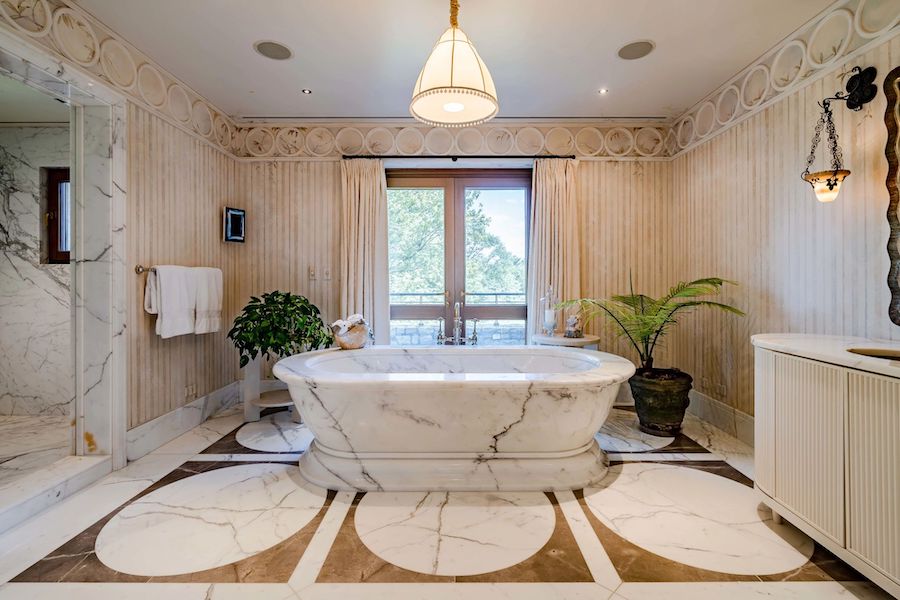 Her primary bathroom; in our 2009 article, we noted that Alter flew local tile dealer Bob Capoferri to Italy to pick out the marble for its bathtub

The Arbor Hill auction will allow prospective buyers around the world to see and bid on the house. With its vast square footage and its roughly 50-acre lot, it would make an ideal buy for a Manhattanite seeking socially distant space to both live and entertain guests. 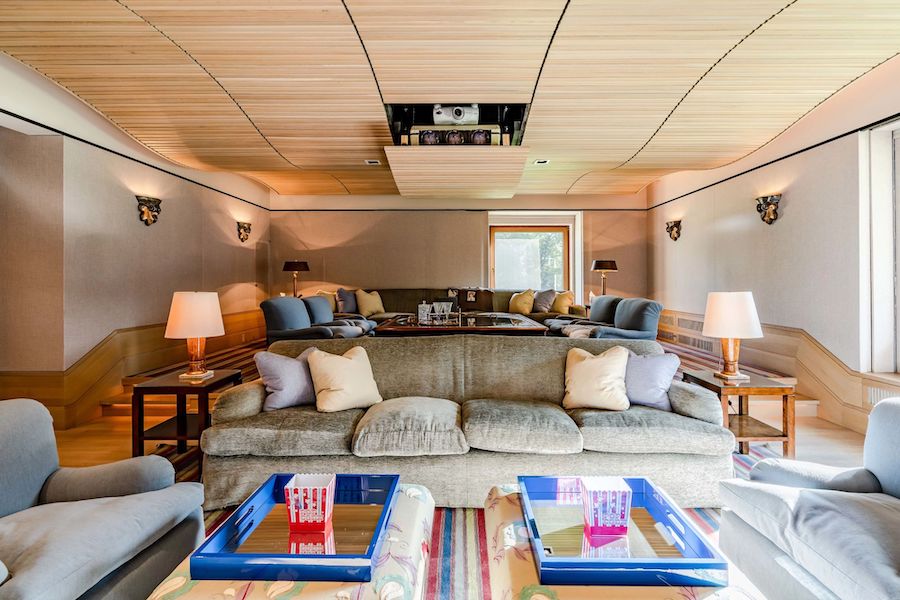 Only one other house for sale in this region has been the subject of this much drama: Lynnewood Hall, the Elkins Park mansion Horace Trumbauer designed for streetcar magnate Peter A.B. Widener in 1897. That house, largely vacant since 1952, has languished on the market for many years and is currently off-market. 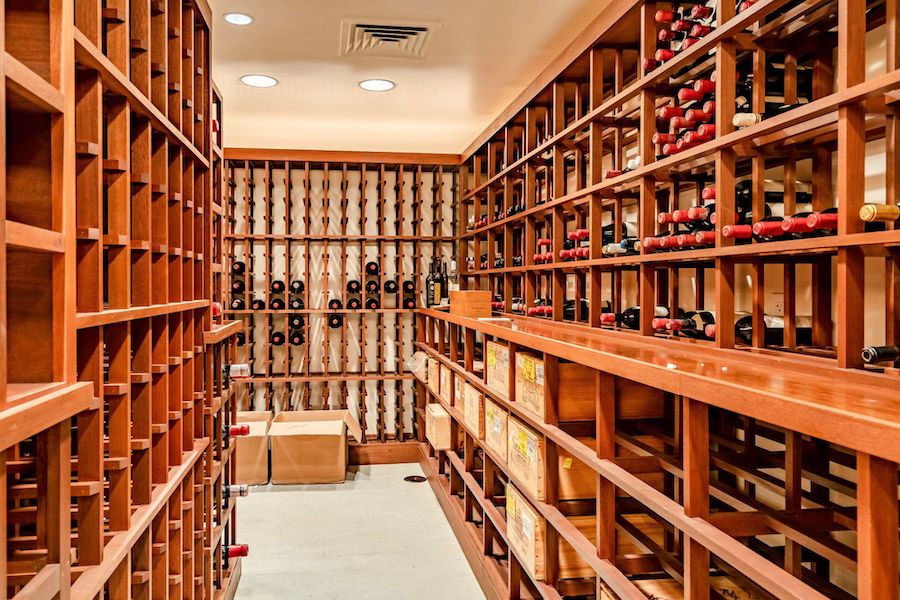 Some have called Lynnewood Hall — a 110-room, 70,000-square-foot mansion — a pinnacle of the first Gilded Age. Arbor Hill is modest in scale by comparison, with a mere 36,957 square feet of interior space, but those who argue that we are living through a second Gilded Age can still point to it as an apotheosis of sorts — and, in fact, we considered it as one in our 2009 article. 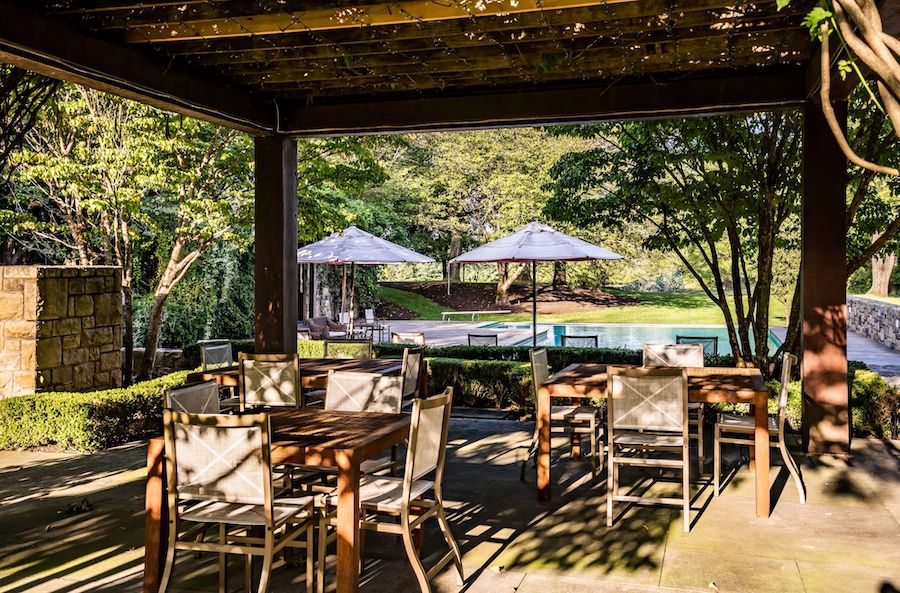 Arbor and pool; a cabana can be seen behind the umbrella at left

We’ve shown you some of the splendors of this house in those earlier articles, and I encourage you to peruse the photos there. The ones you see here show you rooms, features and views not seen before. And you probably won’t see these again after this house finally finds its buyer on Oct. 22nd.