This very urbane apartment complex comes with a side helping of Chester County rustic flair. 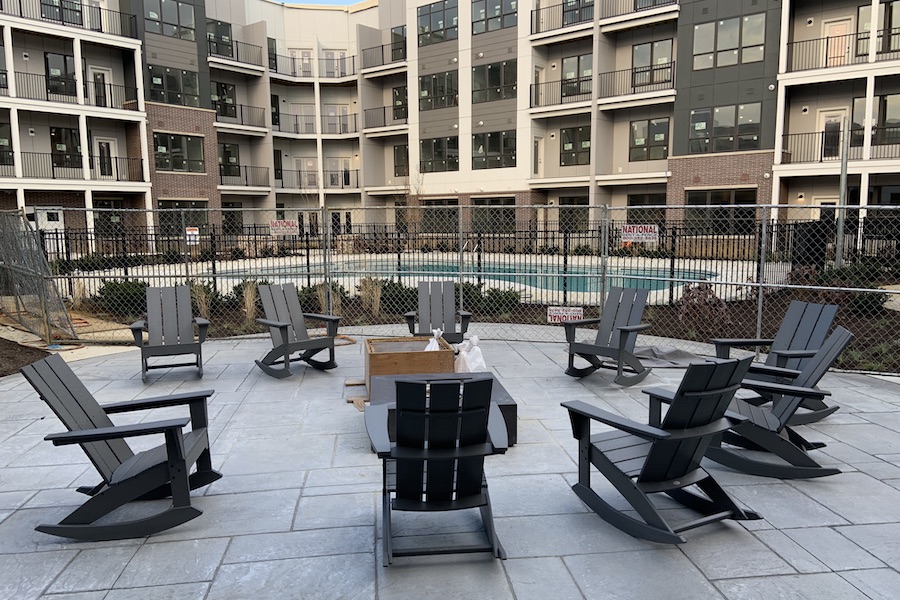 The fire pit (foreground) and second building (rear) were just being finished when we toured the Arlo apartment community in mid-November. The pool lies in between the two. | This photo: Sandy Smith; all others: LCOR

The first tenants are just now moving into Arlo, LCOR’s new apartment complex next to an office campus just outside Malvern, off Route 202 in East Whiteland Township.

Like most new apartment developments going up in the suburbs these days, its two residential buildings are more urban than suburban in form and character. The “garden apartment community” has passed from the scene, it seems, its two-story low-rise apartments in a park-like setting replace by these larger, taller, more closely spaced structures.

But Arlo’s developer knows that people don’t move to Chester County for its urban character. So even as developers design complexes that try to square the circle between urban amenities and suburban space, this one added reminders of just where their apartment complexes are located. 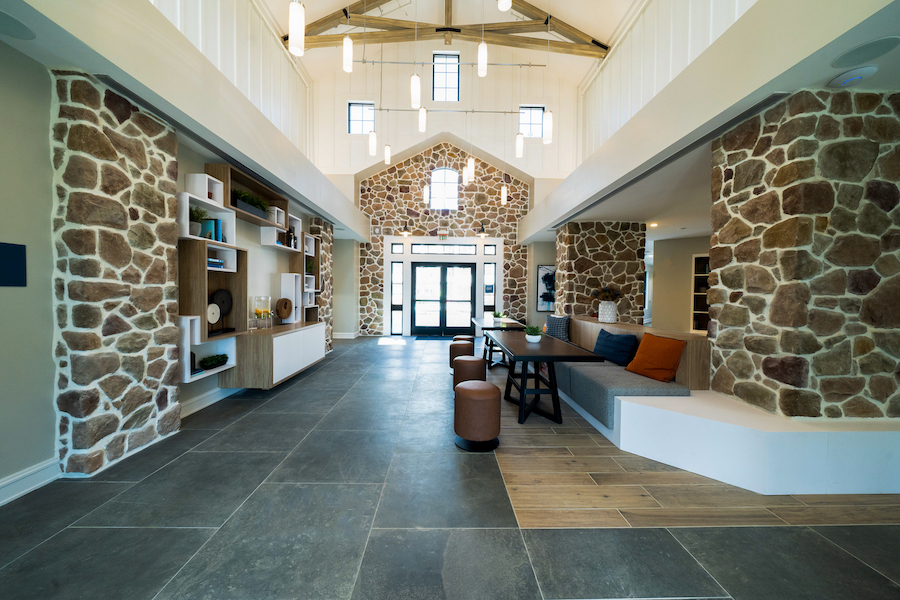 The lobby of the Arlo clubhouse

Here, those reminders come in the complex’s clubhouse.

“The design intent behind the clubhouse is, We’re in Chester County, so we have that Chester kind of charm,” says Brandon Segal, vice president for Philadelphia Metro Development at LCOR.

The boulevard has benches and landscaping in its median as a means of encouraging residents to walk around the property. And, of course, any residents who work in one of the offices can walk to work.

The amenity spaces in the 7,000-square-foot clubhouse are designed for maximum flexibility. The golf simulator, for instance, has a seating area that also allows it to be used as a screening room. That’s on top of the actual private screening room in the clubhouse. 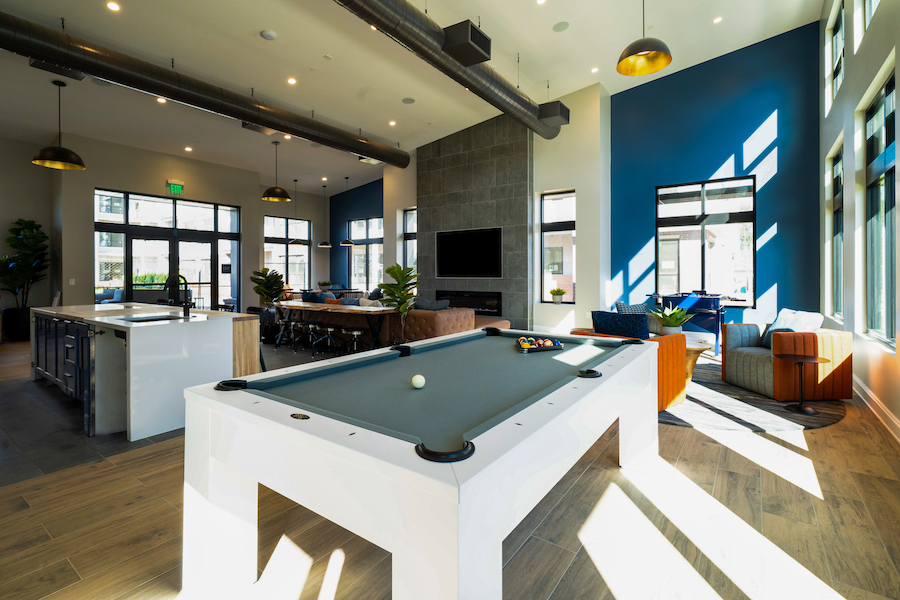 And the main club lounge has games, a large-screen TV, a fireplace beneath the TV and a well-equipped kitchenette with food and beverage refrigerators, a trash compactor, a microwave and warming drawers. The only thing missing is a range: “People aren’t cooking here,” says Segal. “If they use this setup, they’re having an event where they’re bringing in catering with trays.

“And we also don’t want somebody who’s here watching the Super Bowl to be bothered by somebody who’s cooking a turkey dinner or whatever within the same space.” 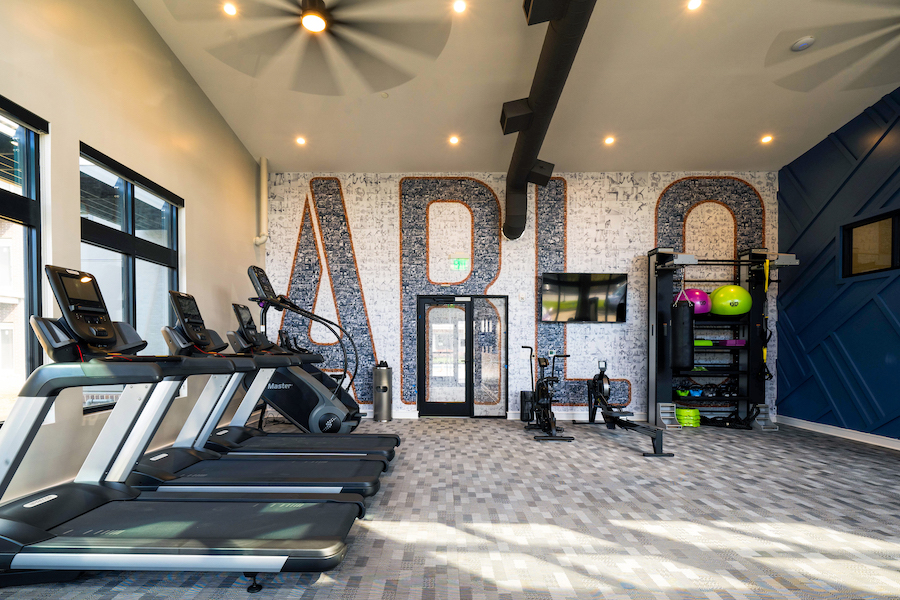 Minus the full demonstration kitchen and a separate bar, the amenities at Arlo closely resemble in type and variety those at LCOR’s 1919 Market luxury high-rise in Center City Philadelphia. But just in case the appearance of the buildings and the overall layout of the development make you think you’re in some sort of Instant Urbanist Nirvana, there are the surface parking lots and garages. 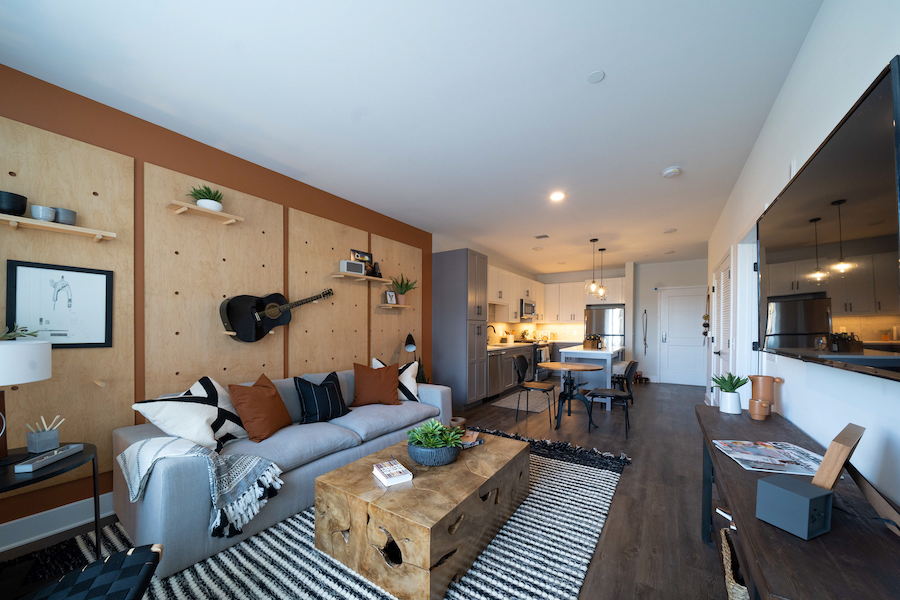 Main living area and kitchen of a model two-bedroom unit 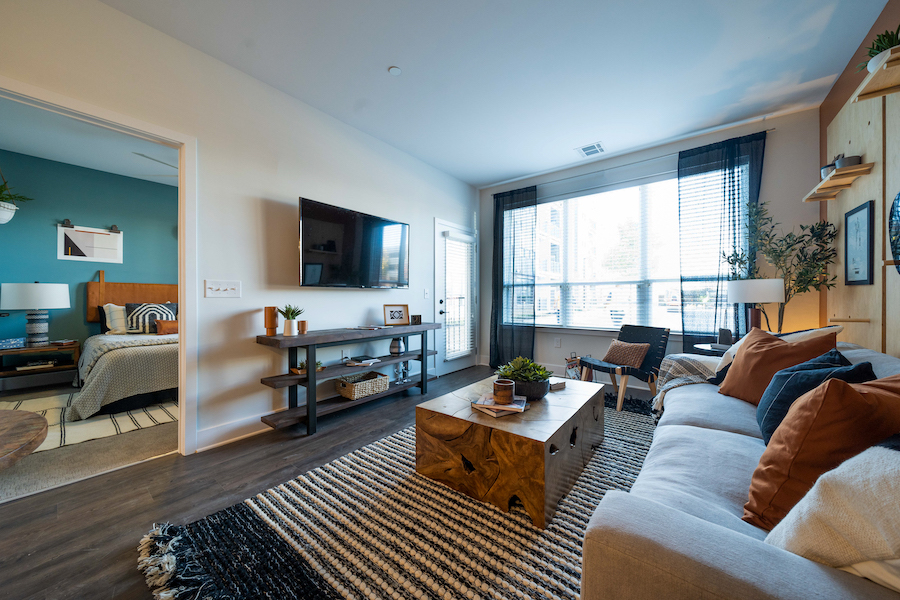 Main living area and glimpse of bedroom in the model two-bedroom unit.

The development has enough parking to ensure that every tenant has at least one space if not more. And tenants can also rent garage spaces for either protected parking or storage space in addition to the storage units in the buildings. 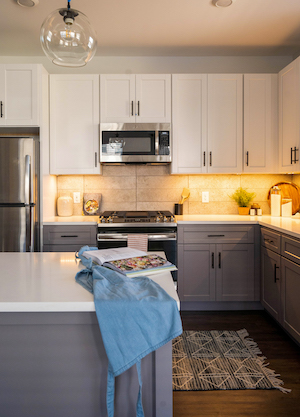 The kitchen in the model two-bedroom unit

Nonetheless, Segal says, the amenities and the apartments are designed to appeal to a tenant who wants that urban sophistication: “People still want to think that they still have a piece of that urban environment, even though they live in the suburbs and are no longer living downtown somewhere.”

And in case you were curious, the complex is not named for famed folksinger Arlo Guthrie. “We just needed a name that was easily visible on signage,” says Segal, and when LCOR did internal brainstorming on a suitable name, that was the one they settled on. But once they did settle on it, one of the members of the brainstorming team did bring up Guthrie.

Arlo by the Numbers