In response to strong demand from families with children, Pearl Properties shrunk the unit count and grew the unit sizes at The Harper. It also supersized the amenities. 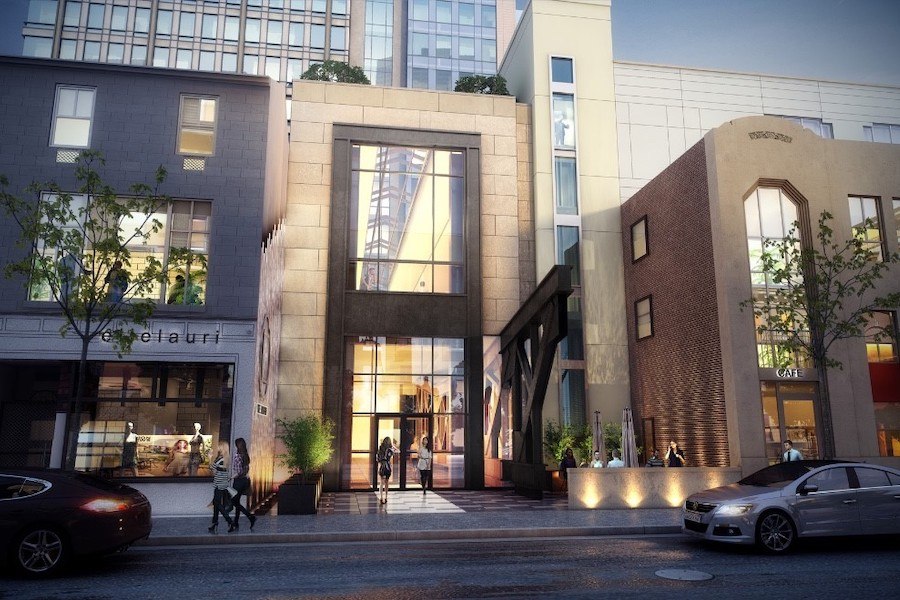 The main entrance to The Harper on 19th Street. The Cook n Solo cafe is to the right of the entrance. | Renderings: DAS Architects via Pearl Properties

It won’t be until June before the first residents can move into The Harper, Pearl Properties’ new 24-story apartment tower now nearing completion just north of Rittenhouse Square. But interest in the deluxe high-rise has been strong. Pearl Properties President James Pearlstein says, “It’s 55 percent leased already, and not one person has walked into the building because it’s still under construction.”

But when those first residents do walk into the building, they may be surprised to hear the delighted squeals of children playing around its swimming pool after they get settled in. 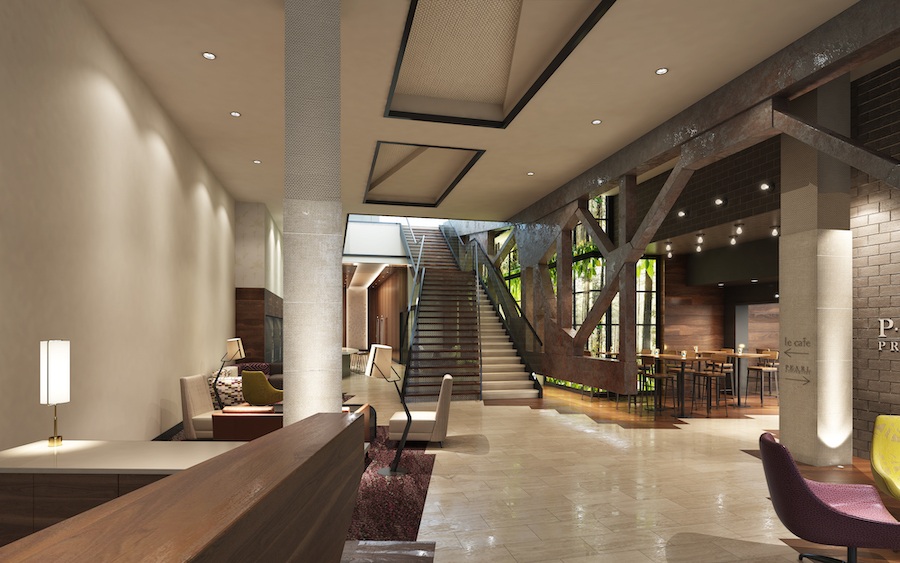 The Harper’s lobby incorporates a support truss that held up the Boyd Theater’s balcony. That truss extends outside and also frames the outdoor café space.

“We’re seeing a great mix of tenants that run the gamut of our usual [renters]: transients, eds-and-meds, graduate students,” Pearlstein continues. “But we’re also seeing an influx of empty nesters and young married couples, including couples with small children.” 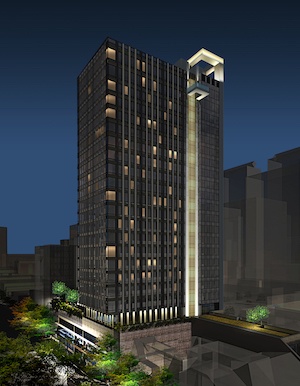 The Harper at night.

This development is something the veteran developer of rental apartments hasn’t witnessed before. And it has led Pearl to tweak the mix of units in the building as a result.

“We downsized the unit count because we’re finding a lot of demand for larger units in this development,” says Pearlstein. “We started with 200 units, but we’re now down to 170 with the same total square footage because we’re building larger units.”

The Rittenhouse Square-based firm has built a new large multifamily project every year and a half on average over the last 15 years, and it has a reputation for delivering stylish buildings loaded with upscale amenities. This building is no exception. But two attributes make The Harper different from anything Pearl has built before. 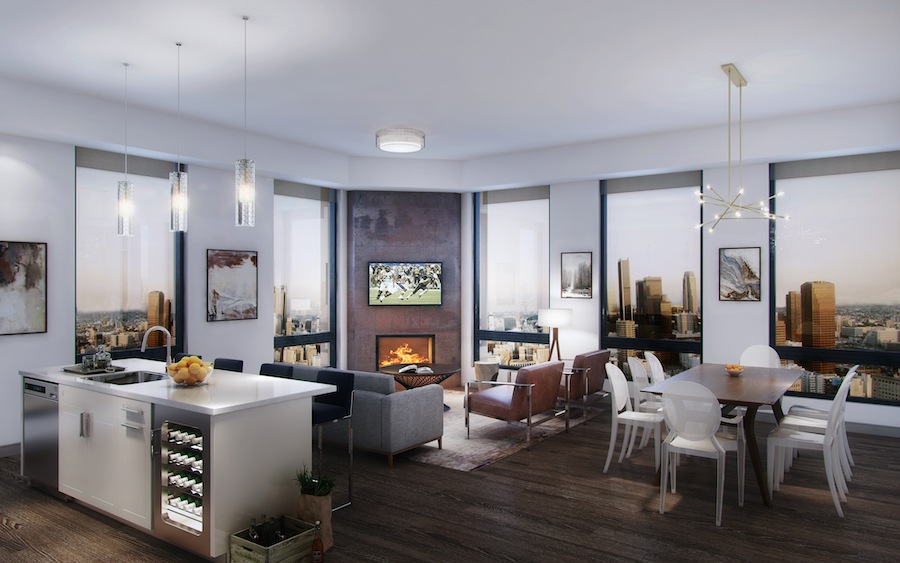 A penthouse apartment at The Harper

The most notable attribute: Three-bedroom apartments, some with dens. These are relatively scarce to begin with, so it’s noteworthy that Pearl has added them to the mix here.

“We’re leasing units in the 1,600- to 1,800-square-foot range where we’ve never done that in our portfolio before,” says Pearlstein.

He chalks this up to the increased appeal of city living among the young as well as the old.

“There’s an urban movement here,” he says. “The city has a lot to offer, so we’re not only seeing empty-nesters but families with children now. They’re doing reverse commutes to work. They may have lived in smaller apartments but are now moving to bigger ones since they have kids. And they’re staying in the city longer than they used to.” 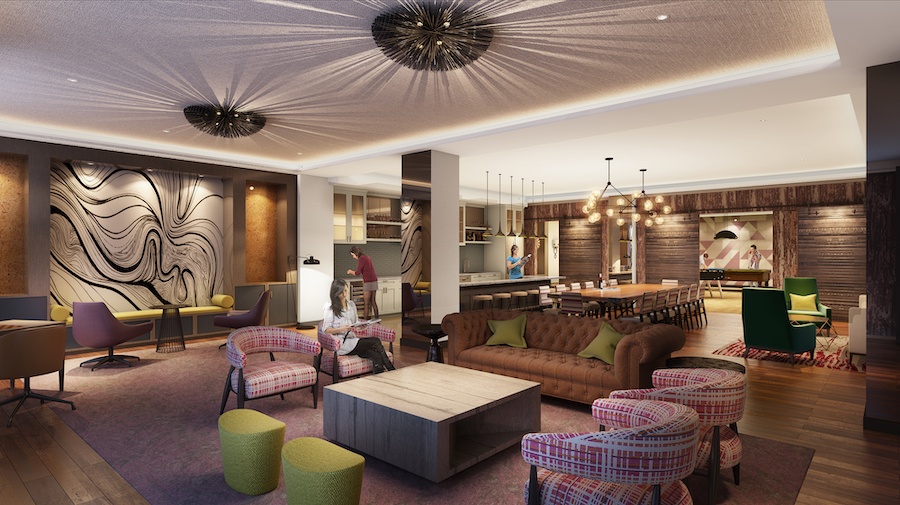 Supersized amenities to go with the apartments

And to encourage them to stick around even longer, Pearl has upped the ante on amenities as well. That’s this building’s other notable attribute: the variety and luxuriousness of its facilities for residents.

“When we opened The Granary, we were breaking new ground in Center City, bringing a suburban-style level of amenities to a city apartment building,” Pearlstein says. 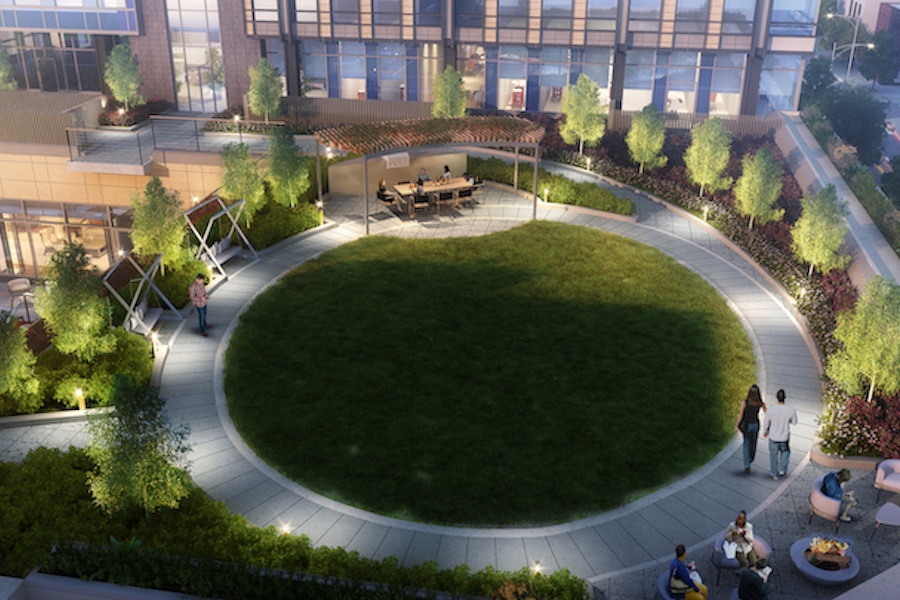 Pearl turned to the same firm that designed the new Granary building, DAS Architects, to design and outfit The Harper. With an assist from emergency architectural surgeon Cecil Baker, the firm has produced a sleek tower that’s a sharp contrast from the more Art Deco-ish building Pearl first proposed. 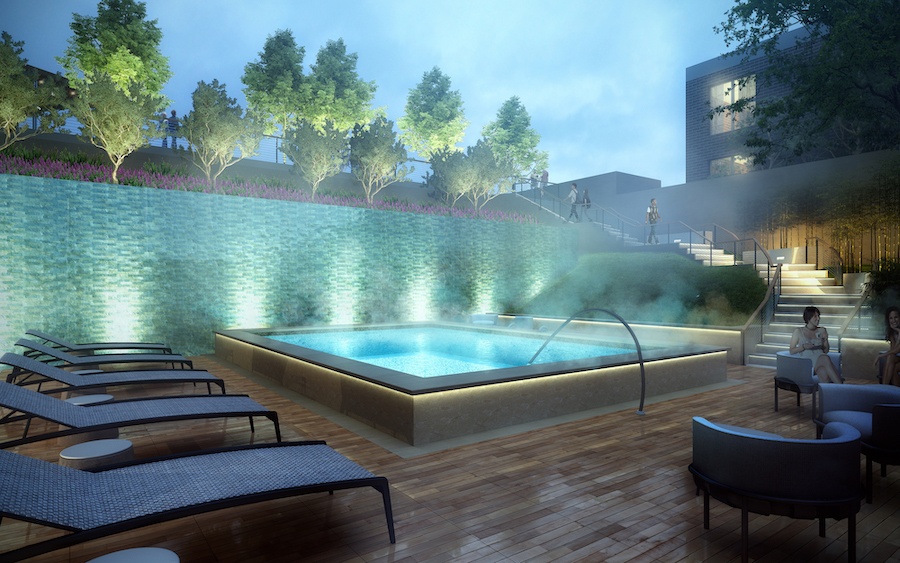 The swimming pool below the park

It’s also a sharp contrast in terms of amenities. Not only will you find a concierge, an outdoor terrace, a swimming pool, meeting rooms, a professional-quality catering kitchen and a couple of pretty snazzy lounges — one of them reserved for penthouse-level residents — here.

You will also find a 5,000-square-foot fitness center with top-of-the-line equipment and a yoga studio, a 10,000-square-foot outdoor park with grills, a picnic area, hammocks and a fenced-in dog park, a pool table, a game room, a media lounge, 2,000 square feet of co-working space and a half-court indoor basketball court. 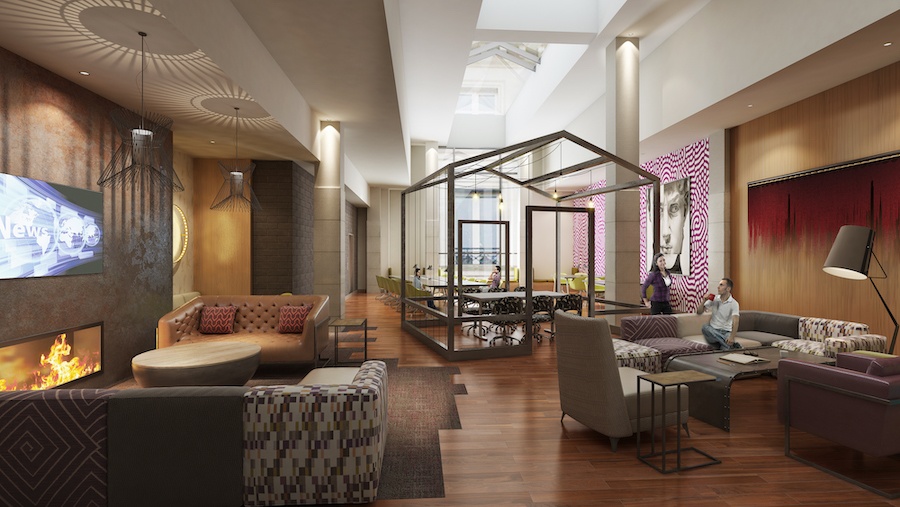 The penthouse amenity floor lounge will also have its own kitchen and a sky deck.

And there’s still more: an underground 140-car valet parking garage and an Amazon package delivery hub where tenants can have any of their online purchases, no matter where they made them, delivered.

“These amenities are like nothing Pearl Properties has done before,” Pearlstein says. “There are a lot of builders putting up good buildings with great amenities, but we want to stay one step ahead of the competition.”

Of course, this level of luxury doesn’t come cheap: Pearlstein says rents in this building will run greater than $3 per square foot per month, which he says is on the high end for Center City. That works out to  $5,400 per month and up for the largest of those supersized apartments. 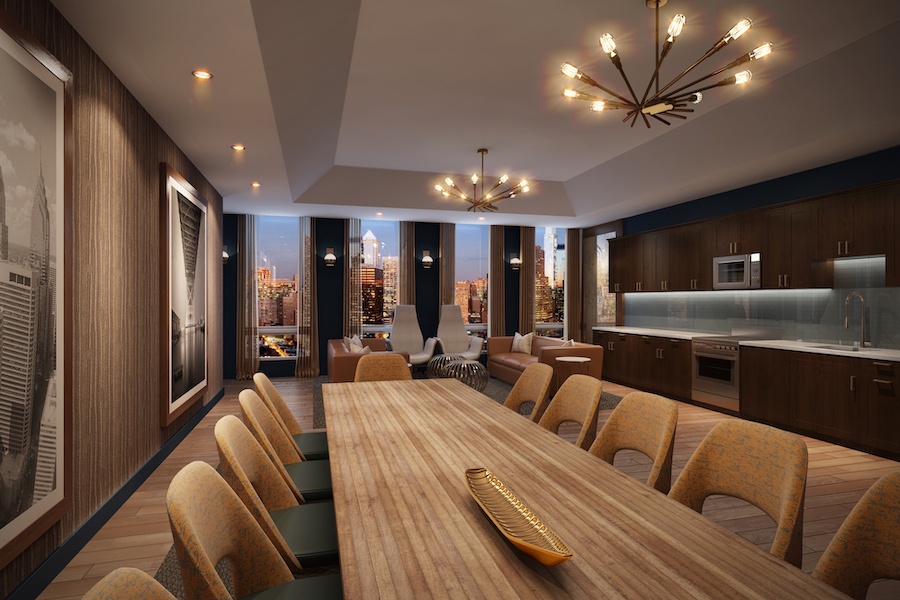 The board room on the main amenity floor

Restaurants and retail to enliven a block

They haven’t left the general public out either. The building has 20,000 square feet of retail space along its Sansom Street side to go along with the Target already located at 19th and Chestnut and the Gap outlet on the Chestnut Street side of this plot.

Two new restaurants are already preparing to open shop as well. One is Tatel, the second American location for a chain of Spanish restaurants owned by a passel of Spanish celebrities; it will occupy what remains of the Boyd Theater. The other will be a new café from Steve Cook and Michael Solomonov, the brains behind CookNSolo Restaurant Partners. It will be located next to the apartment building entrance on 19th Street, have outdoor seating, and have access from both the street and the building lobby, making it a meeting place for both residents and the public. 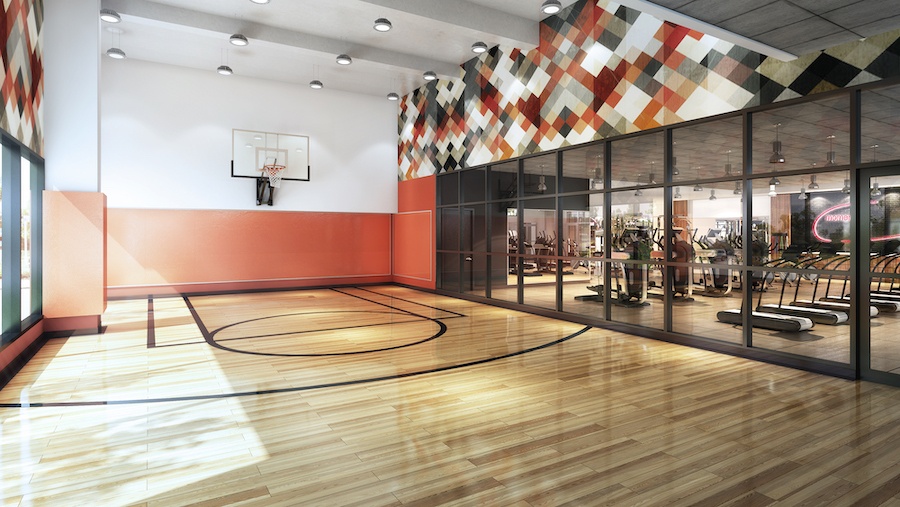 One other commercial tenant has been lined up. Berkshire Hathaway HomeServices Fox & Roach Realtors will move its Rittenhouse Square office from The Rittenhouse to the Sansom Street side of the building.

Pearlstein intends for this building to do for the 1900 block of Sansom Street what Pearl’s The Sansom did for its 1600 block. (CookNSolo also figured into that development, which houses two of their restaurants, Dizengoff and Abe Fisher.)

“When we built The Sansom, we activated the whole block,” he says. “This block hasn’t been activated in 30 years. We have 200 feet of frontage, and it’s our goal to activate it.”

One thing Pearl may want to consider to help that process along is a child care center. It sounds like the building tenants will need one.

Pearl Properties is taking applications for apartments in The Harper at the Pearl Apartments website.