They tried even harder to make the tower disappear this time. But it won't go away. At least one person at the WSWCA Zoning Committee meeting wished it would. 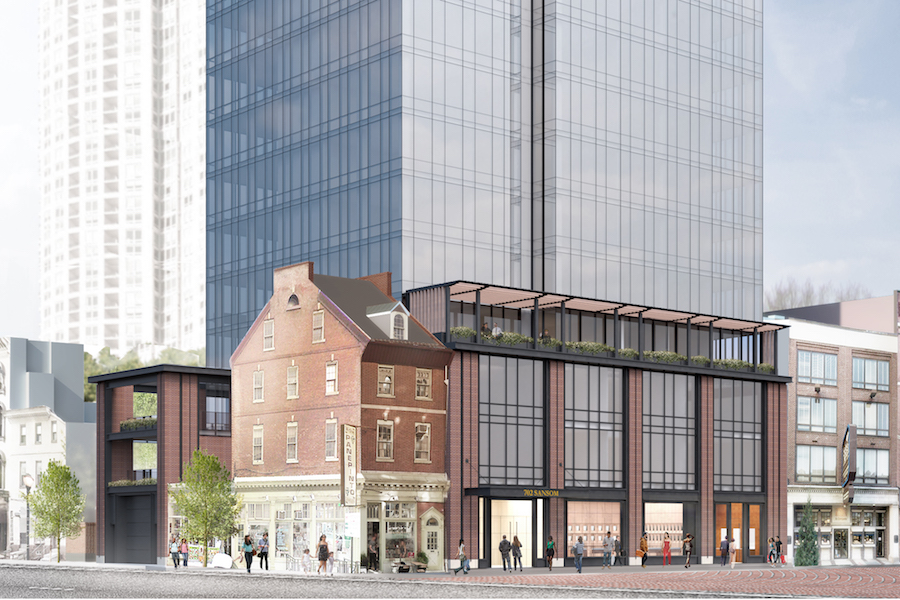 That’s the best thing that can be said about SLCE Architects’ reworked condominium tower for Toll Brothers City Living, which plans to build it at the east end of the heart of Jewelers Row. 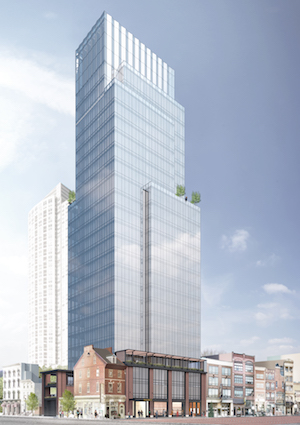 Full view of tower from the northeast

In some key ways, this tower design is an improvement on the two-faced structure SLCE designed last year, which attempted to mimic some of the facades of the older buildings that surround it on the Sansom Street side but attempted to become invisible to Washington Square to its south.

This time around, SLCE decided to make the tower disappear on both sides, responding to feedback the Civic Design Review panel gave on the first tower.

Gone are the brick facing on the tower’s north half and all attempts to mimic the look of the older buildings around it on the four-story base. Gone too is the fourth story of that base, replaced by a trellis-covered terrace on the Sansom Street side.

“We’re attempting to have the tower recede into the sky to reduce the massiveness of it, and we’re doing that by making it all glass,” said David Van Spreckelsen, vice president of Toll Brothers’ City Living division, of the revised design.

“We’re also integrating the fenestration of the tower into the base, and that gives it a more modern feel. The aim is to have the tower and the base speak to each other so it appears as all one building.”

Toll and SLCE made several other attempts to make the tower less intimidating and monolithic. The revised design took five stories off the top of the building, and the planned number of condominium units fell from 109 to 85. In addition to the 12-foot setback at the fourth floor level, terraced setbacks have been added at the 15th, 22nd and 24th floors. Atop the building is a crown that the developer may rework to form some sort of statement honoring Jewelers Row. 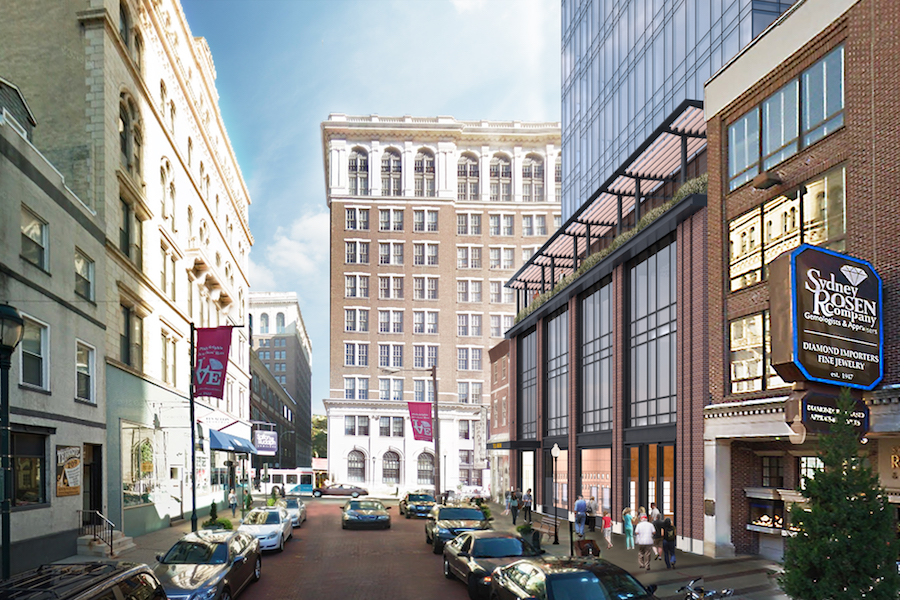 SLCE architect Jim Davidson told the WSWCA audience that the building and its crown “recall the Art Deco massing of older towers in New York, San Francisco or Philadelphia.” And looking at this tower from certain angles, it looks as though the architects took 30 Rockefeller Plaza, stripped it of its stone facing, and reclad it in glass.

One other major change took place on the inside: the retail space was expanded from 2,600 square feet to 4,500 square feet. The high-ceilinged space, Van Spreckelsen said, could appeal to a wider spectrum of tenants and add life and vitality to a block that goes quiet after the workday is over. 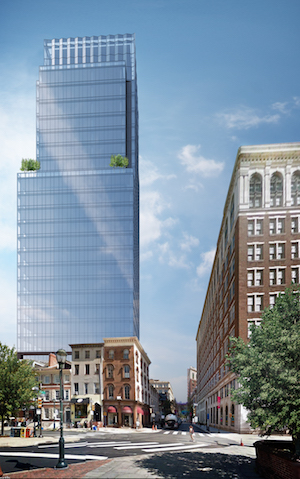 The comparison with The St. James, however, may be instructive. That tower casts a slimmer, less monolithic profile across all its dimensions than this one does, and like 500 Walnut, it doesn’t clash as much with its immediate neighbors. For all that SLCE strove to make this tower disappear, it simply won’t go away; its bulk precludes that happening.

One other comparison with The St. James is relevant here. That building’s developer saved the historic row house fronts along its Walnut Street side, something Preservation Alliance for Greater Philadelphia Executive Director Paul Steinke asked the presenters to do once again at the meeting. And once again, they demurred, citing both cost and aesthetic considerations. Davidson specifically referred to the “cacophony” of varying building and floor heights in his presentation as something that would have clashed with the tower’s aesthetic.

“The cacophony is what we wanted to preserve,” Society Hill Civic Association President Diane Roesch said near the end of the meeting.

As the lot is zoned for this type of development and Toll now has all the necessary permits, the only hoop it needs to jump through before it can start construction is Civic Design Review, which takes place Feb. 6. The Preservation Alliance, however, is still challenging the developer’s demolition permit in court.