After L&I told the developer the clock had run out on its 29-story tower proposal, it took a little off the top and is re-entering the permit maze. Opponents are sure to be waiting. 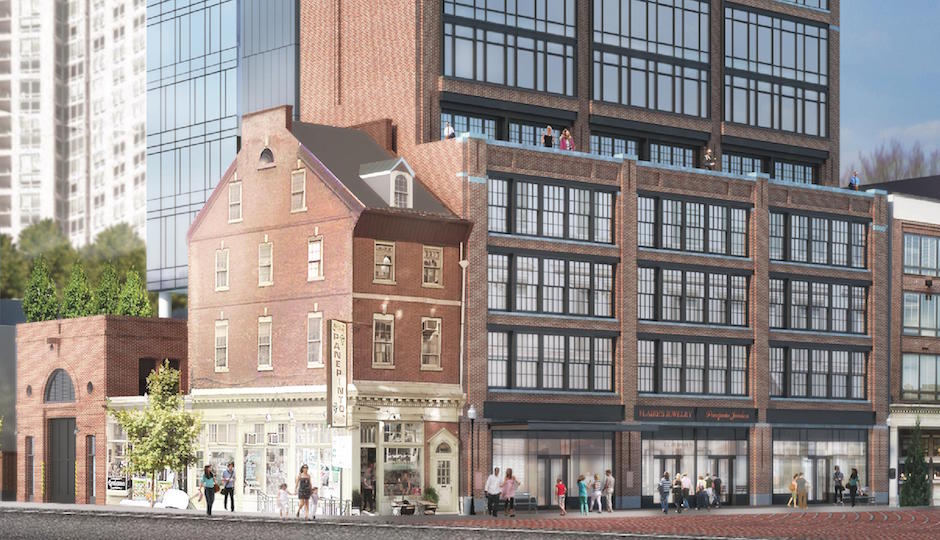 Toll Brothers has given its 29-story Jewelers Row tower proposal, shown here, a haircut and is sending it back to Licenses & Inspections for permits. | Rendering: SLCE Architects

Time has run out for Toll Brothers’ permit applications to build a 29-story condo tower with ground-floor retail in the heart of Jewelers Row. Or so says the city Department of Licenses and Inspections, according to a news report in The Philadelphia Inquirer.

So Toll Brothers is going back to the drawing board and starting the permitting game anew with a slightly shorter tower proposal.

The Inquirer reports that the company is presenting a revised submission for a lot consolidation based on a 23-story residential tower to city surveyors today.

L&I had notified Toll yesterday that it considered the permit applications for the 29-story tower “abandoned” after the firm failed to respond to a request for additional details about the plan.

Both the old and new projects require lot consolidations in order to get enough square footage to build a tower taller than the original 16-story tower Toll first proposed a year ago. Toll is requesting that lots adjacent to its proposed site at 702-10 Sansom Street be included in the total square footage calculation under a principle known as “unity of use.”

(The 700 block of Sansom Street is zoned for the densest development the city allows. CMX-5 zoning has no height limit; instead, “floor area ratio” governs how high a building may rise on a site.)

Toll still has valid demolition and construction permits for the 16-story tower. The permits have led the city Historical Commission to repeatedly postpone action on nominations to have the buildings at 702, 704, 706 and 708-10 Sansom St. placed on the city’s historic register.

The Preservation Alliance for Greater Philadelphia has filed suit in Common Pleas Court to have an L&I Review Board decision stating that the buildings did not deserve historic protection overturned.

“The Preservation Alliance continues to believe that this project would irreparably harm one of Philadelphia’s most historic and vibrant specialty retail districts,” Executive Director Paul Steinke said in an email message.  “We have appealed the demolition permits that were issued last November and are waiting for a court date. Overall we are actively working for the preservation of Jewelers Row.”