A noontime ceremony took the wraps off the city's most luxurious condo tower to date. Tom Scannapieco is already at work on the next one. 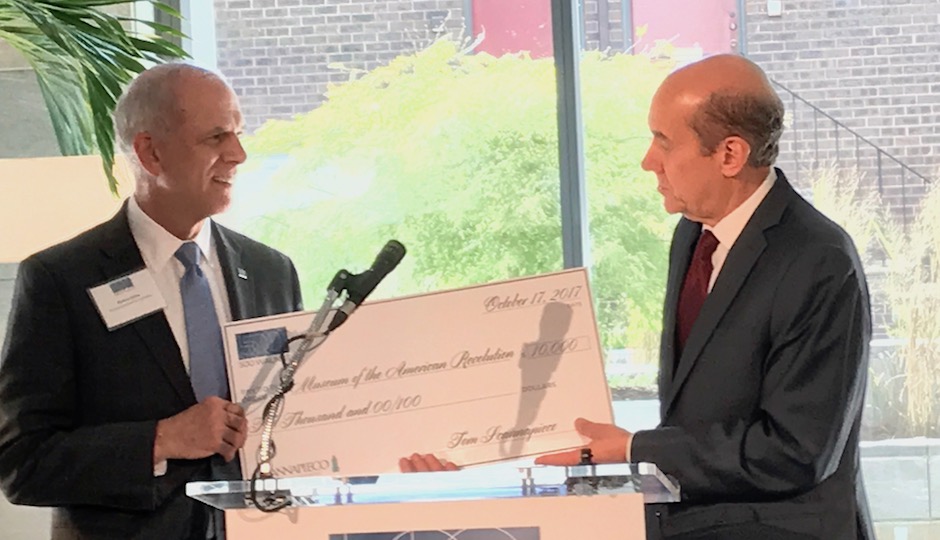 In addition to taking the wraps off his building, developer Tom Scannapieco (right) presented a check for $10,000 to Museum of the American Revolution CEO Michael Quinn. | Photos: Sandy Smith

Perhaps the person most surprised at pulling off the feat that is 500 Walnut is Tom Scannapieco himself.

His goal, he told the assembled audience at today’s formal unveiling of the finished product, was to give Philadelphia “a world-class building the likes of which the city has never seen before.”

Thanks to a clever act of architectural legerdemain from Cecil Baker + Partners and top-quality work from builder Intech Construction, he delivered just that. And when he sold the building’s bi-level top-floors penthouse for a record-shattering $17.6 million while the concrete was still being poured, he also demonstrated that there were Philadelphians out there who wanted to live in just such a building.

But he hadn’t expected that more than two-thirds of the high-rise condo’s units would be sold by the time the doors opened. “So I think we got it right,” he said.

Mayor Jim Kenney, who also spoke at the ceremony, held up the building as an example of what happens when people work together to achieve a desired goal. He had special praise for Councilman Mark Squilla (D-1st District), who, he said, “understands how to balance community needs with development needs.”

But he also welcomed the influx of well-heeled residents the building brings. Scannapieco has said that getting such people to care about and get involved in the affairs of the city is one of the reasons he builds buildings like this one. For his part, Kenney didn’t mind that they would pay no property taxes on their units for the next 10 years: “We don’t want the tax abatement, we just want the wage taxes,” he quipped to general laughter at the ceremony.

Baker praised Scannapieco for his ability to make the project work on a challenging site. “I’d done plans for this site with developers from New York and Chicago, and they didn’t work,” he said. “They left here a little poorer and with bruised egos. Then along came Tom.”

Today’s formal opening also gave guests a chance to look over some of the tower’s distinctive shared spaces: the fourth-floor community floor with its two pools, board room, lounges, outdoor terrace and guest suite, designed by Janet Espinshad, and the entrance to the building’s robotic parking garage, through which the invited guests entered today’s event.

The garage prompted this awestruck statement from Squilla: “When you come into the parking deck, you feel like you’re in the lobby of a hotel.”

Exactly. The level of attention given to a couple of garage bays is emblematic of all that Scannapieco Development poured into this building.

The garage itself, which the guests didn’t see, is one of the building’s technological marvels. Another is the column-free interiors, which allowed buyers maximum flexibility in designing and outfitting their units.

You’ll never get to see what those look like unless a buyer gives a reporter like me permission to come inside, for Scannapieco Development policy is to keep the names of buyers confidential. However, the assembled guests and we media types will have a chance to see inside one of the units when a furnished model condo opens for inspection in the very near future.

Does this building really need one, given how well sales have been going? “We’ve always had one in our plans,” Scannapieco said, “and since we thought we could sell it when it’s served its purpose, we decided to go ahead with it.”

In the meantime, the photos of the guest suite below give you an idea of the quality of what’s inside 500 Walnut, as do those of the other interior spaces I could shoot without a crowd.

Scannapieco is already at work on a project he fully expects will outclass even this one, with Baker in charge of the design once again. (After noting this city’s reluctance to embrace change and contrasting it to Scannapieco’s interest in pushing the envelope, the architect remarked at the ceremony that Scannapieco told him, “Next time, let’s do a real modern building.”) He has the land in hand a few blocks to the east of 500 Walnut. Before he can get to work in earnest, he said, he needs to buy air rights from the owners of neighboring properties.

“It’s always exciting to do something a little better than we did before,” he said.

Put another way: Expect jaws to drop again when his next tower goes before Civic Design Review, and plan on reading about another breathtaking record sale price in this space a year or two hence.

A Few Scenes from 500 Walnut 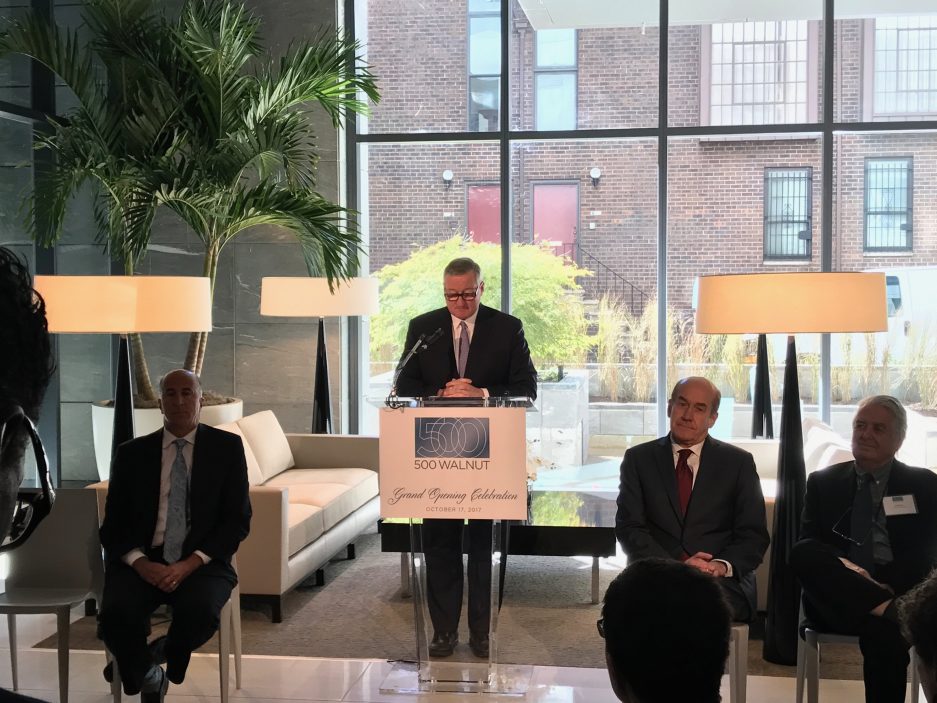 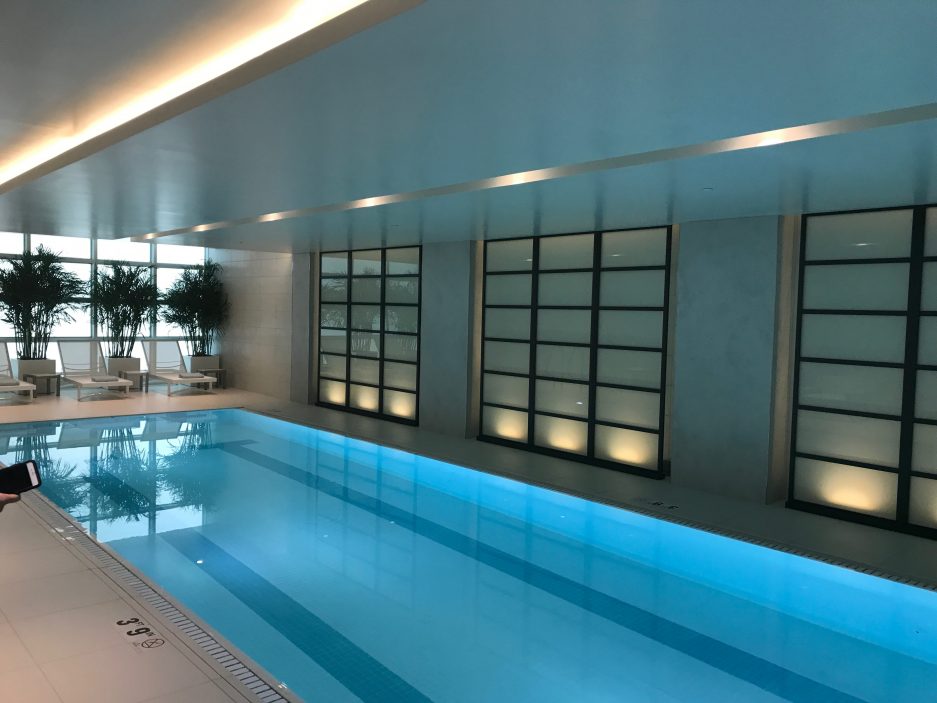 The 50-foot lap pool on the community floor. 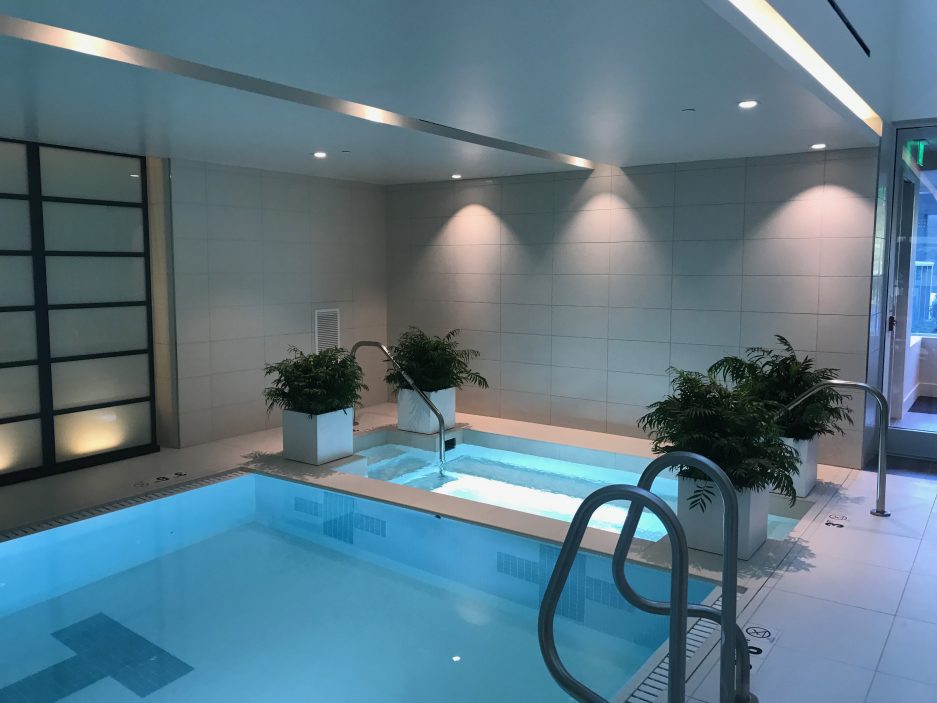 The hot tub at the other end of the pool. 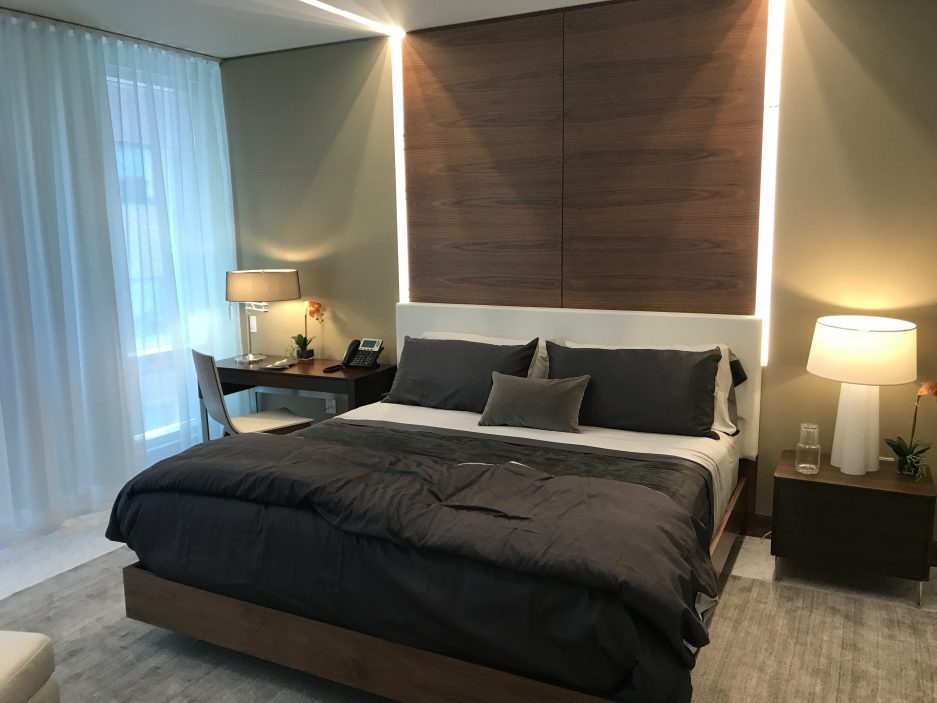 Residents can reserve this guest suite for visitors. 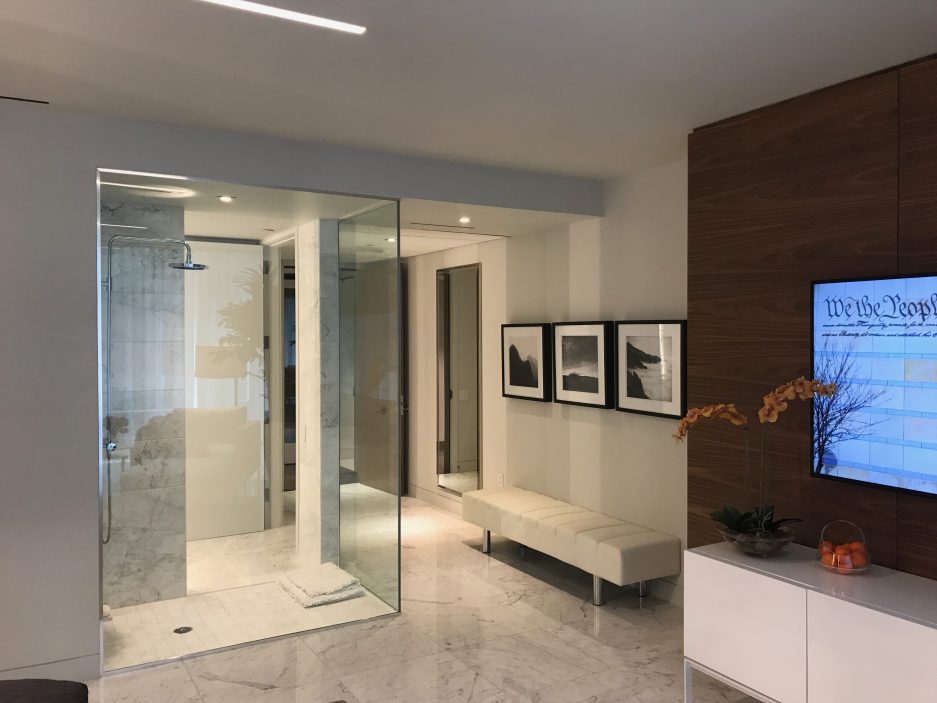 The suite is outfitted like a room at a luxury hotel... 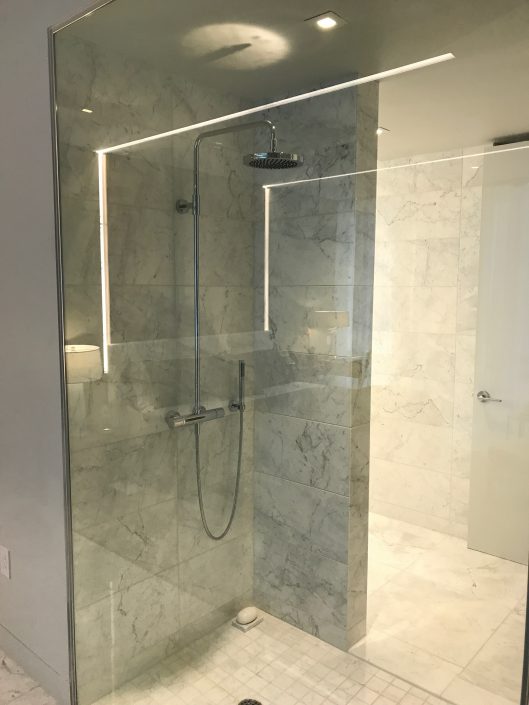 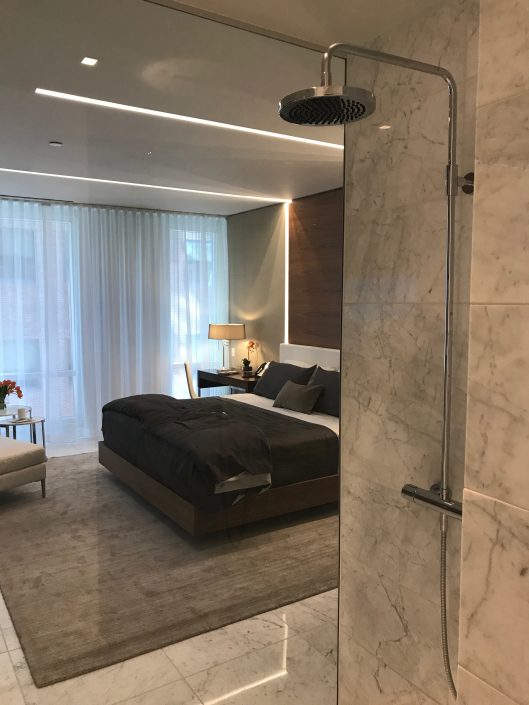 The view from the shower into the suite's bedroom.