Apartment List made a major change in its methodology designed to correct for "luxury bias." Its latest rent report, based on the new methodology, shows rents rose modestly for the fifth straight month in June. 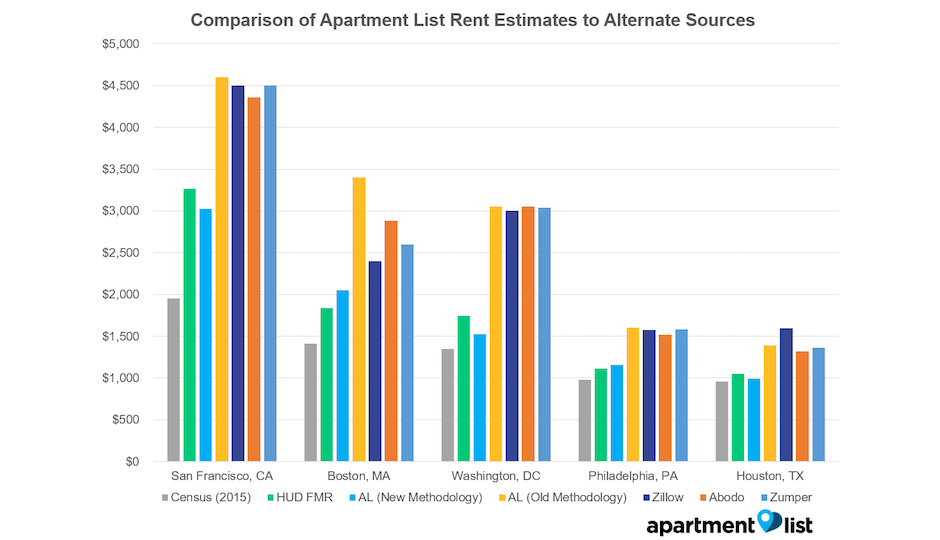 This chart shows the difference in median rents in several cities using the various methodologies of the apartment search engines. Apartment List’s new values are in light blue; the old ones are in yellow. The figures here are for May 2017 data.

You may have noticed that this section has not posted monthly data on rent trends in Philadelphia since April.

We explained the reason why in our April 11 post reporting on rental trends as reported by the three major apartment search sites: Zumper, Apartment List and Abodo. Put bluntly, there was no way of knowing whether the data sources were any good, as all three based their reports on data available only to them.

This state of affairs apparently caused some concern over at Apartment List, because in late May, the San Francisco-based apartment search site announced a complete revision of its methodology.

What Apartment List did was change the source of its data to reduce sample bias. The proprietary databases used by all three of the major search sites rely mainly on apartment listings posted online, which tend to skew towards the upper end of the market. And because the listings posted vary widely from month to month, without some sort of correction to remove the noise those variations produce, the changes — especially year-over-year ones — will swing wildly.

So Apartment List opted to take a hybrid approach by combining Census data from the American Community Survey, which collects data on a wider range of units, with its own same-unit analysis of listings in its database to extrapolate changes in rent from month to month and year to year. 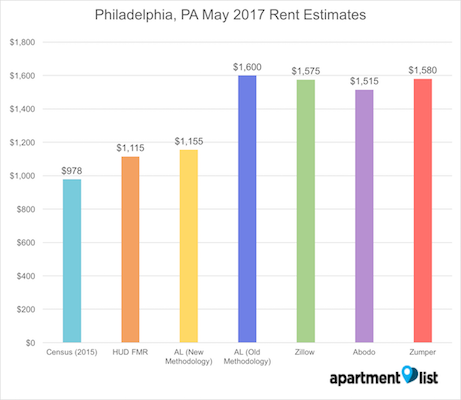 The breakdown of the Philadelphia estimates for May 2017.

This approach produces noticeably lower rent figures in the cities the site surveys. In some of the more expensive markets, the difference is dramatic; here, it’s not quite as great — about $500 per month — but it’s still noticeably closer to the figures based on Census data, which the Department of Housing and Urban Development (HUD) also uses to determine rent subsidies.

“We spent roughly six months researching and implementing the methodology changes that we rolled out last month, and are making ongoing efforts to continuously refine our methodology and improve the accuracy of our estimates,” said Apartment List data scientist Chris Salviati. “We now use data from the Census Bureau’s American Community Survey (ACS) as the base for our estimates – we chose to use this data because the survey methodology used by Census results in a broad sample that is representative of all property types and geographic locations within a city, instead of skewing toward the luxury units and trendy neighborhoods which are overrepresented in private listing data.

“As a result, our new estimates are notably lower than previous estimates in most cities, but we’re confident that we’re now presenting a more complete and accurate picture of the rental markets in each city.”

Last month, according to the new methodology, rents in Philadelphia increased 0.3 percent from the previous month and 2.1 percent from the previous year. Both figures are below the national figures of 0.5 and 2.9 percent, respectively. The median rent for a two-bedroom apartment in this market stands at $1,160, a figure slightly above the national median of $1,150 but more affordable than in many other large cities, according to Apartment List.