The city, the Commonwealth and the William Penn Foundation together have committed $215 million of the $225 million needed to build the cap over I-95. 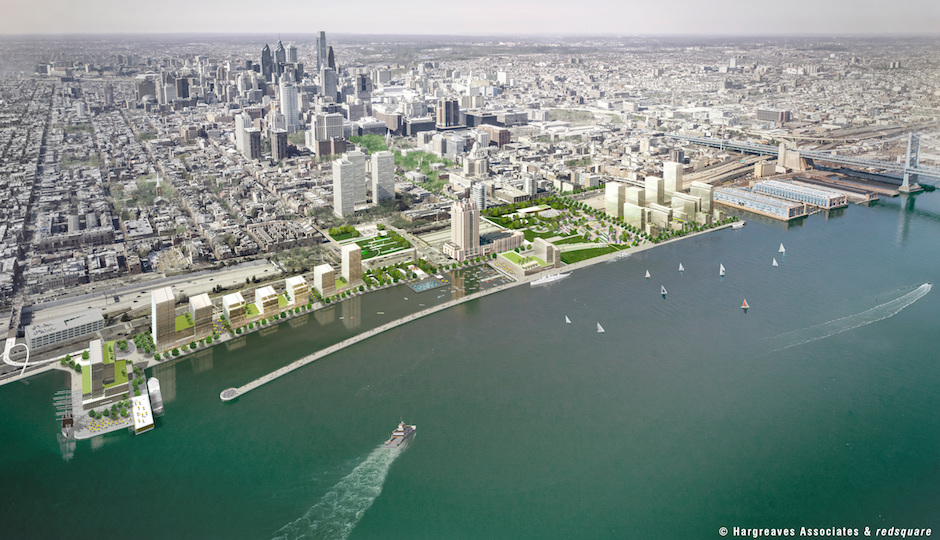 The new park and civic space for which funding has been secured is part of a larger overall vision for transforming the central Delaware riverfront. | Renderings: Hargreaves Associates and redsquare unless otherwise indicated, via Delaware River Waterfront CorporationThat huge new lawn intended to suture the gash separating Old City from the Delaware riverfront is a go.

At a noontime news conference at Penn’s Landing, Gov. Tom Wolf, Mayor Jim Kenney, and Janet Haas of the William Penn Foundation announced that together they have committed all but $10 million of the $225 million needed to build a new park and civic space between Chestnut and Walnut streets from Front Street to the water’s edge and a new signature pedestrian bridge across Columbus Boulevard at South Street.

The William Penn Foundation also announced at the news conference that it would help the city, the Commonwealth and the Delaware River Waterfront Corporation (DRWC) obtain the last $10 million needed to finish the job.

The city has allocated $90 million over the next five years towards the project from its capital budget. A spokesperson for Gov. Wolf said that the Commonwealth has identified $100 million it can contribute on top of the $10 million already being spent on preliminary design work, and the William Penn Foundation’s board has approved a $15 million contribution to the park. The foundation also expressed confidence that the remaining $10 million could be raised in a timely fashion.

As designed by Hargreaves Associates, the new park would enlarge and extend the existing half-block cap south of Chestnut Street to stretch all the way to Walnut and across both I-95 and Columbus Boulevard. From the east side of Columbus Boulevard, the cap would gently slope towards the riverside promenade, replacing the hardscaping of the existing Great Plaza with a large grass lawn fitted with ampitheater seating.

Amenities that will be included in the eight-acre expanse include a new ice skating rink in winter, spray pools in the summer, a café and space for other active uses. The existing Irish and Scottish Memorials will also be part of the new public space.

Spruce Street Harbor Park fans can breathe easy, at least for now: the park at the Tidal Basin will remain relatively unchanged, with improvements in that area consisting principally of a new swimming pool. The master plan for the central Delaware riverfront does envision new private investment along the Penn’s Landing Marina in the years to come.

DRWC and city officials envision the new park as the linchpin of an even greater transformation of the riverfront, with some 1,500 new housing units, 500 more hotel rooms and more than 100,000 square feet of retail, dining and entertainment space to be added down the road. These projects are projected to generate up to $1.6 billion in revenues for the city, the Commonwealth and the School District.

“This project is a once-in-a-generation economic development opportunity. It’s also long overdue,” Mayor Kenney said in a news release. “For decades, Philadelphia left millions in tax revenue on the table by not investing in its waterfront. We are behind the curve in comparison to other major cities who have all seen significant economic growth thanks to public investment in their waterfront properties. I thank the state, the William Penn Foundation and DRWC for coming together to make this possible.”

Joining the governor, mayor and Haas at the announcement were City Council member Mark Squilla (D-1st District), Transportation Secretary Leslie Richards and representatives of the city and the DRWC.

Some preliminary design work has already taken place. The bulk of the design work should be completed and the necessary permits issued by the end of 2019. Construction is slated to take three years.

Images of the Future Penn's Landing 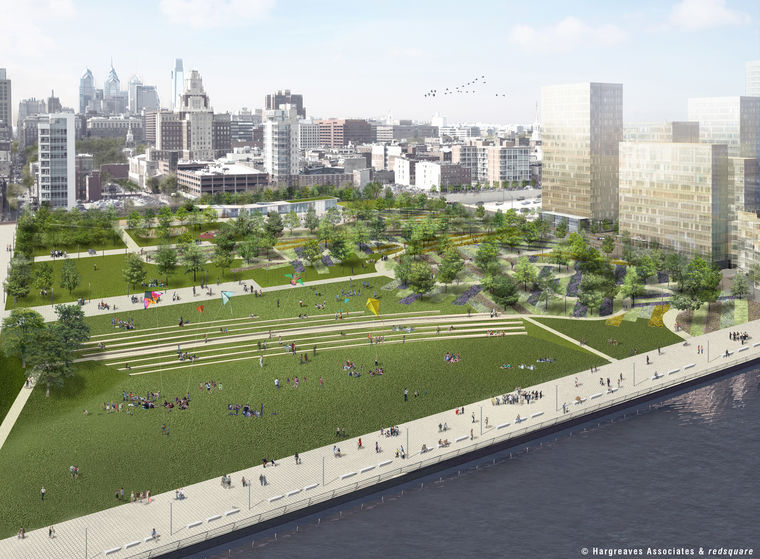 The cap and park over I-95 and Columbus Boulevard between Chestnut and Walnut streets. 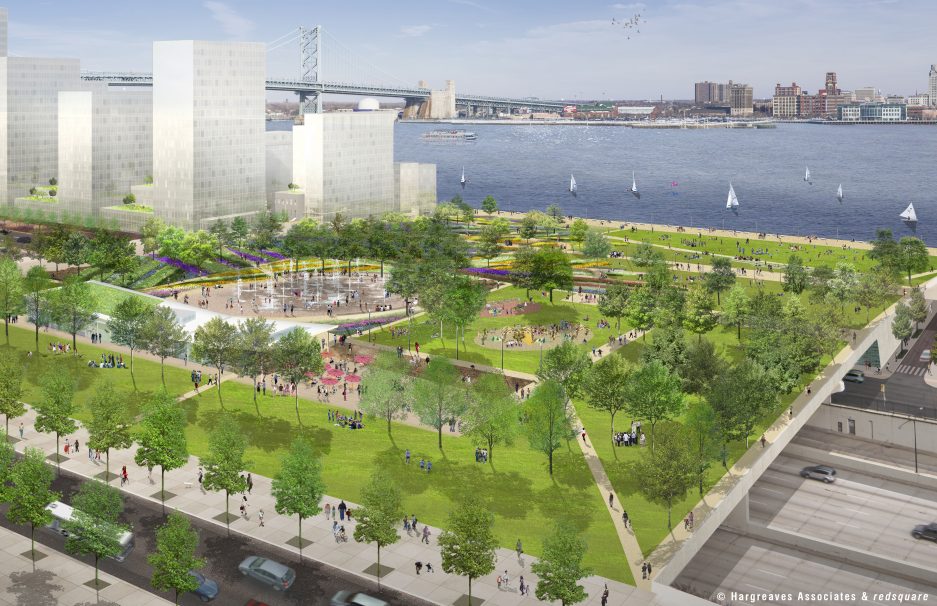 The park, looking east towards the Delaware. 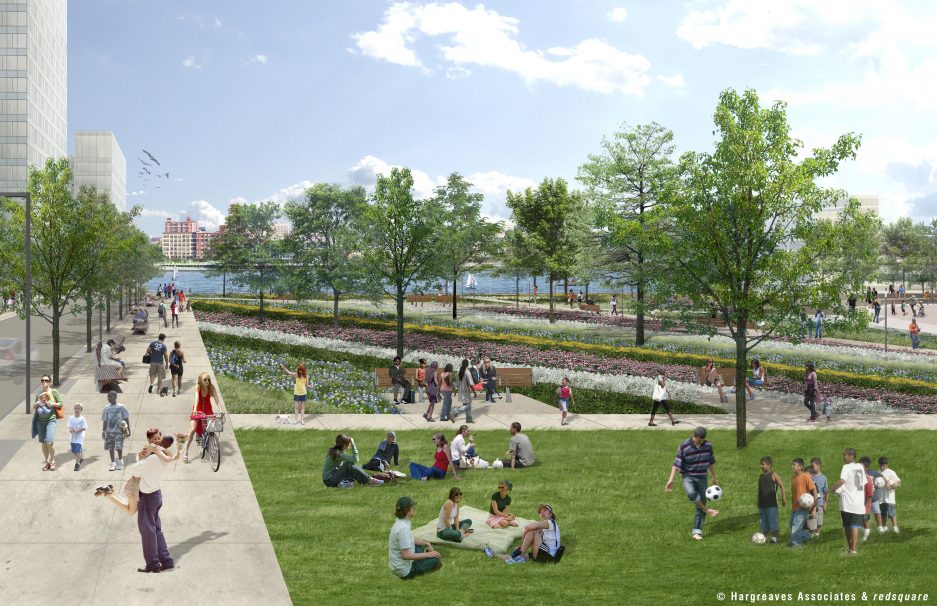 A view of the park from Front and Chestnut streets. 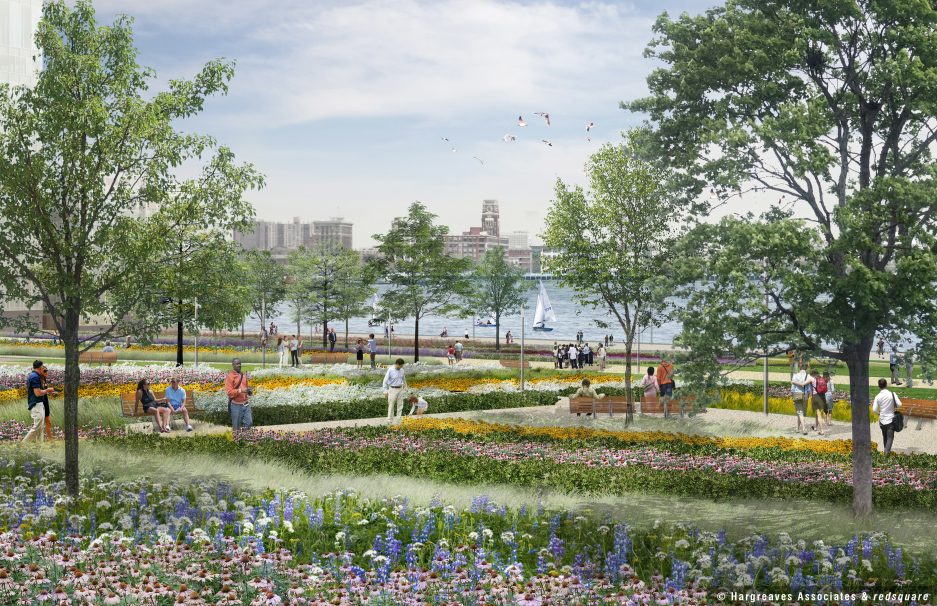 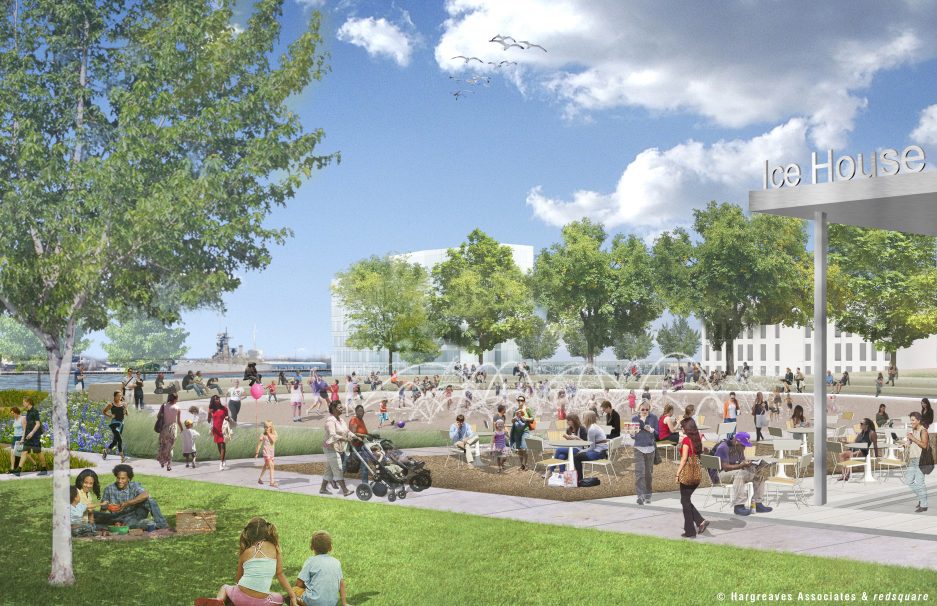 The café and spray pools in the summer. 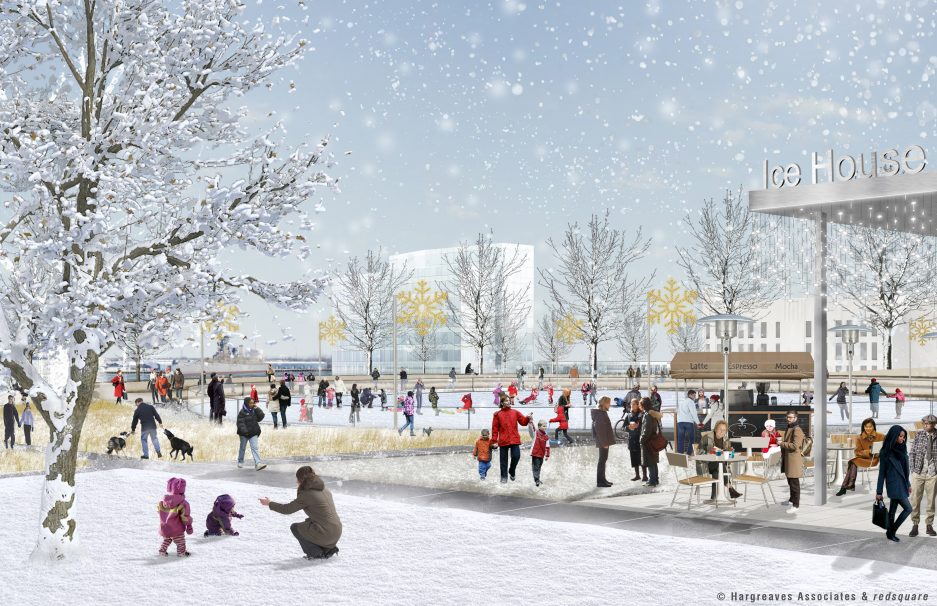 The café and skating rink in the winter. 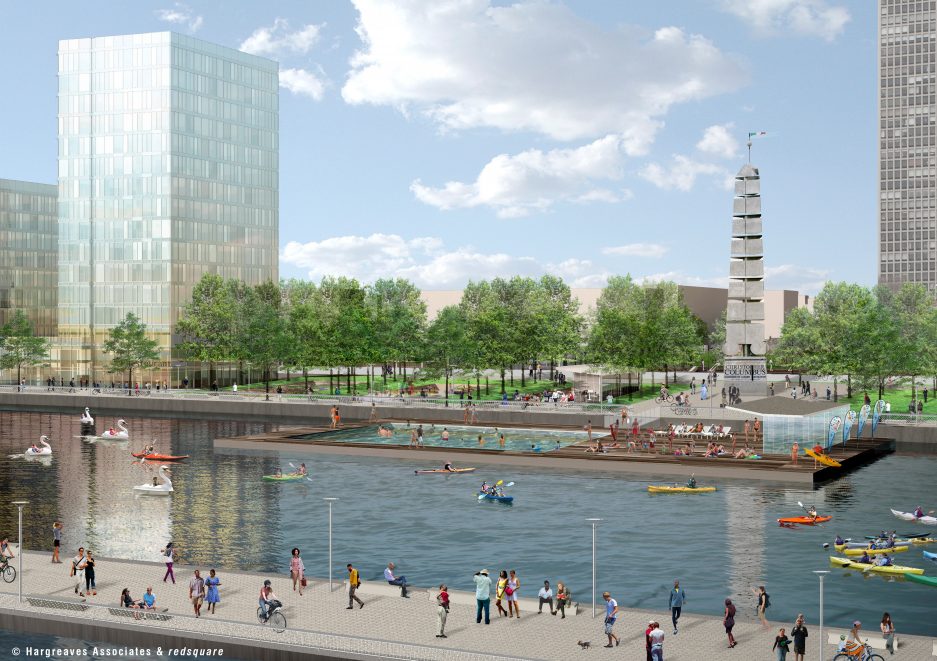 An overview of the Tidal Basin, looking west. 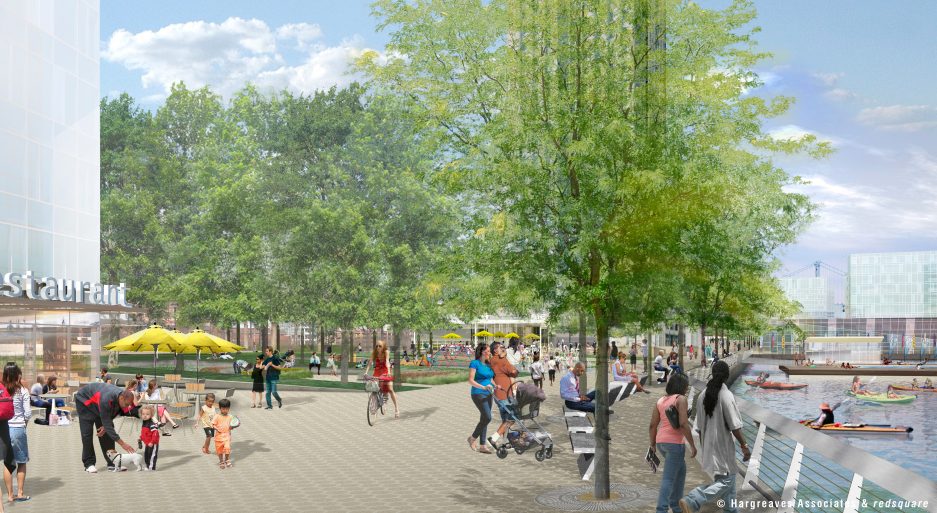 The Tidal Basin park, viewed from the south along the basin promenade. 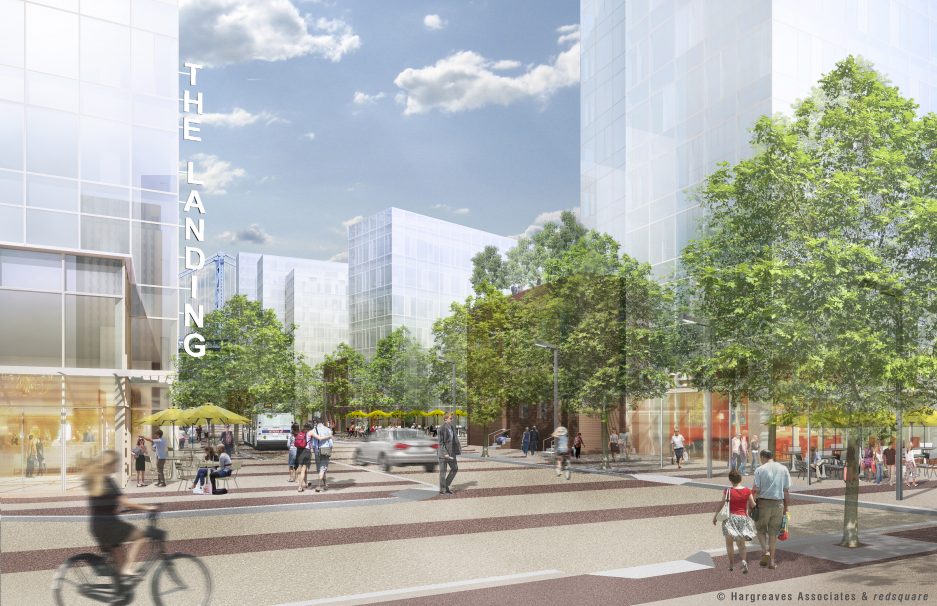 A view of future construction from Front and Market streets. 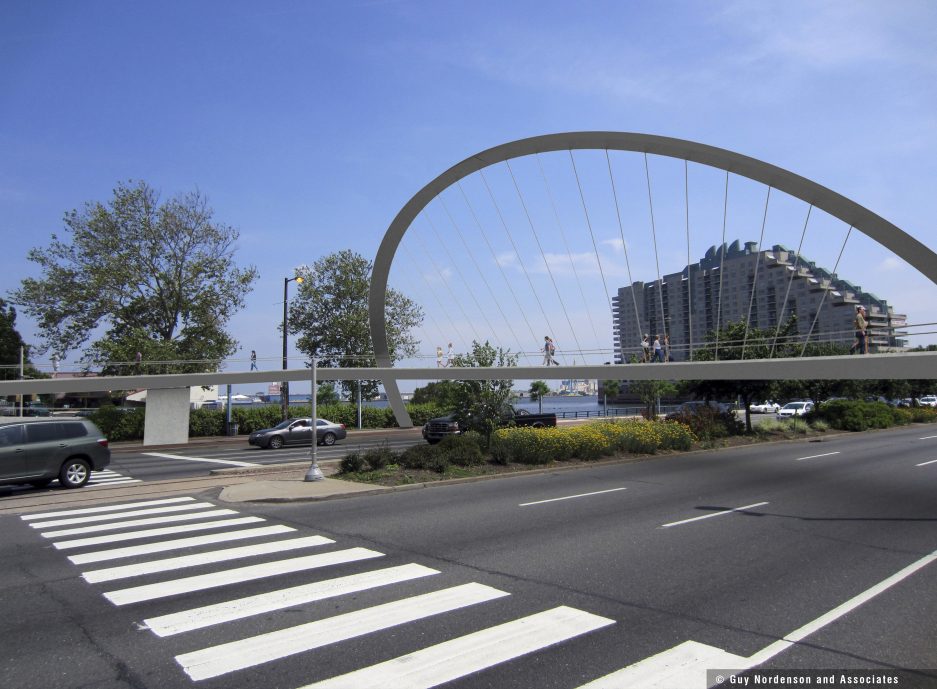 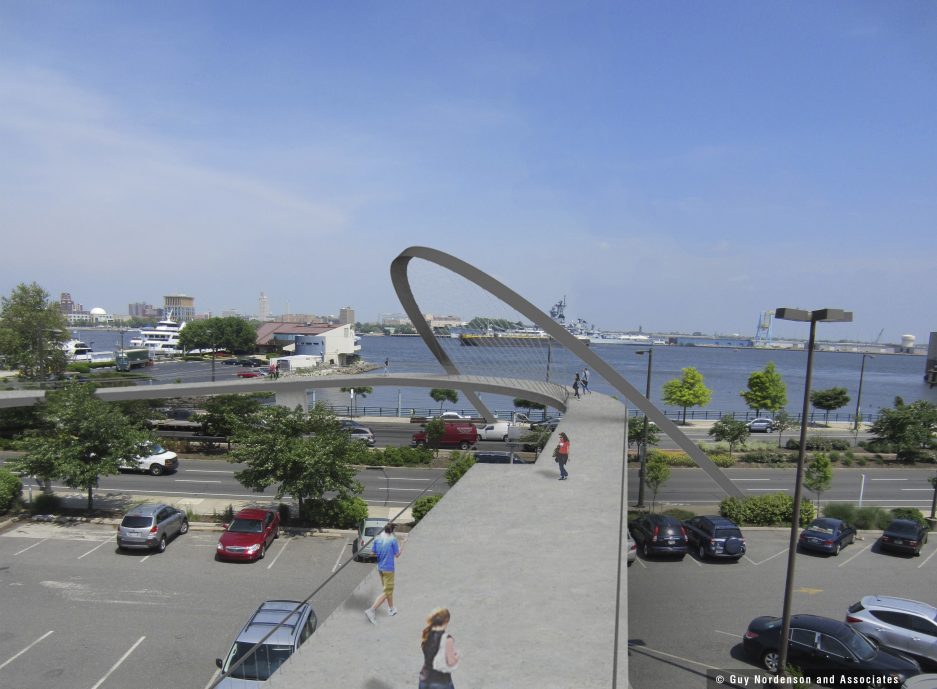 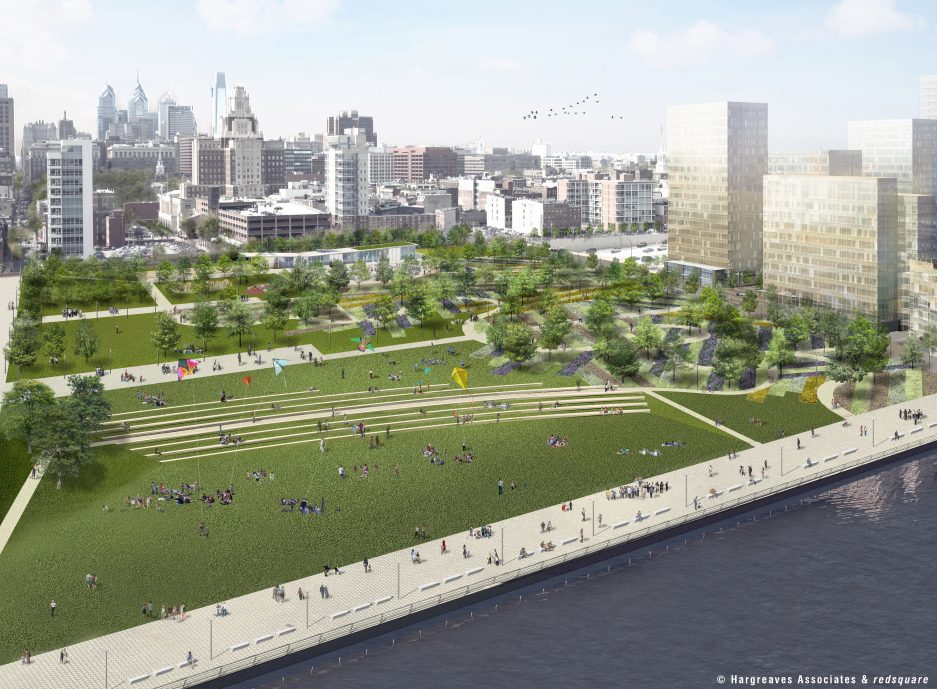 A daytime view of the park, looking west. 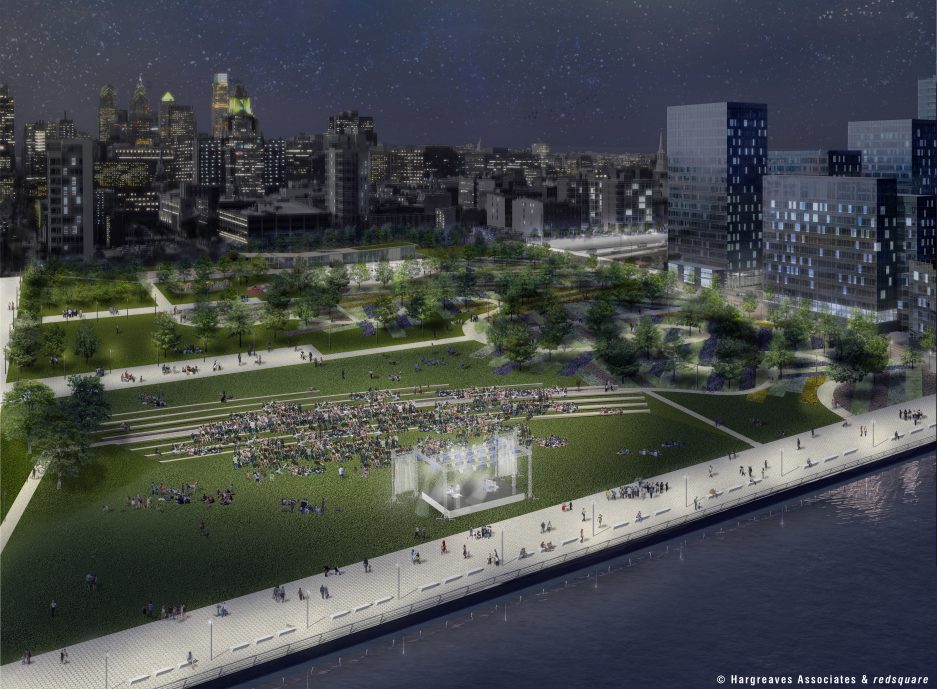 The same view, at night. 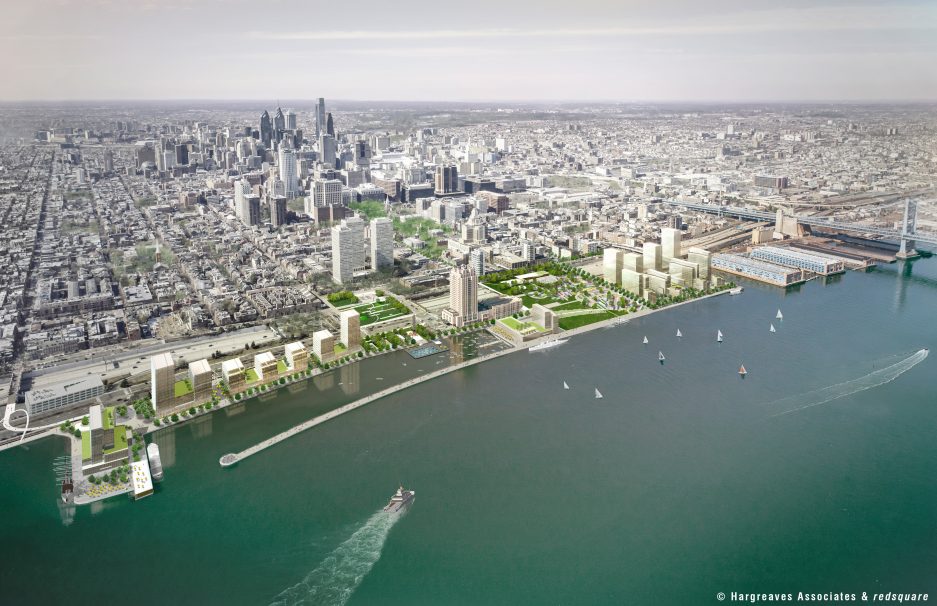 An overall view of Penn's Landing, including planned future development.