The bride-to-be works at L. Priori Jewelry and helped design her own ring. 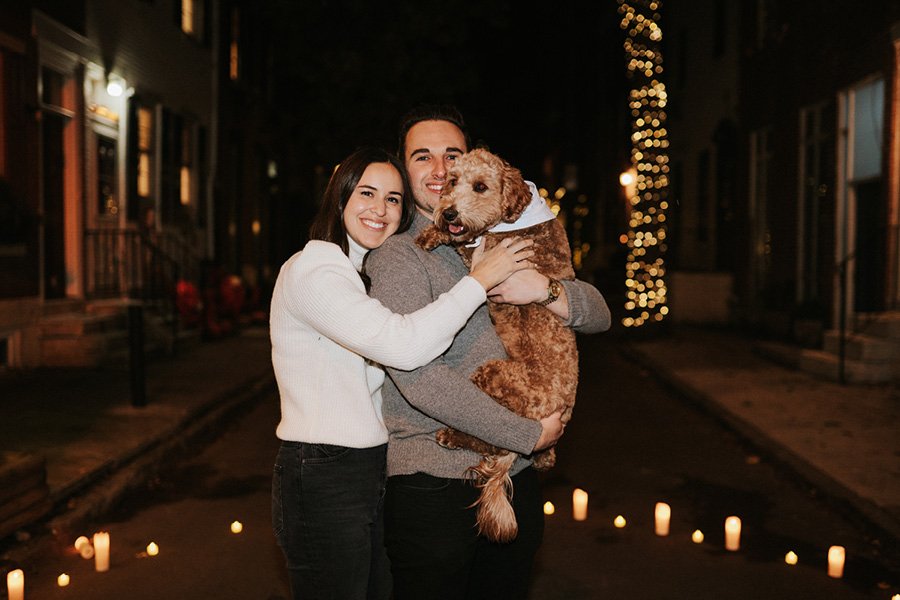 Leigh Kurtzman and Lee Goldberger’s Addison Street engagement took place in the fall. Their dog Barbie joined in on the fun. Photography by Rachel Rosenstein Photography

Proposal season continues this month with a Philly favorite location for popping the question: Addison Street. But what makes this Addison Street engagement particularly unique is the couple has the same first name (well, it’s spelled differently but you get the idea) and the bride-to-be, who works at a local jeweler, helped design her own ring. Rachel Rosenstein Photography captured all the sparkling moments below. 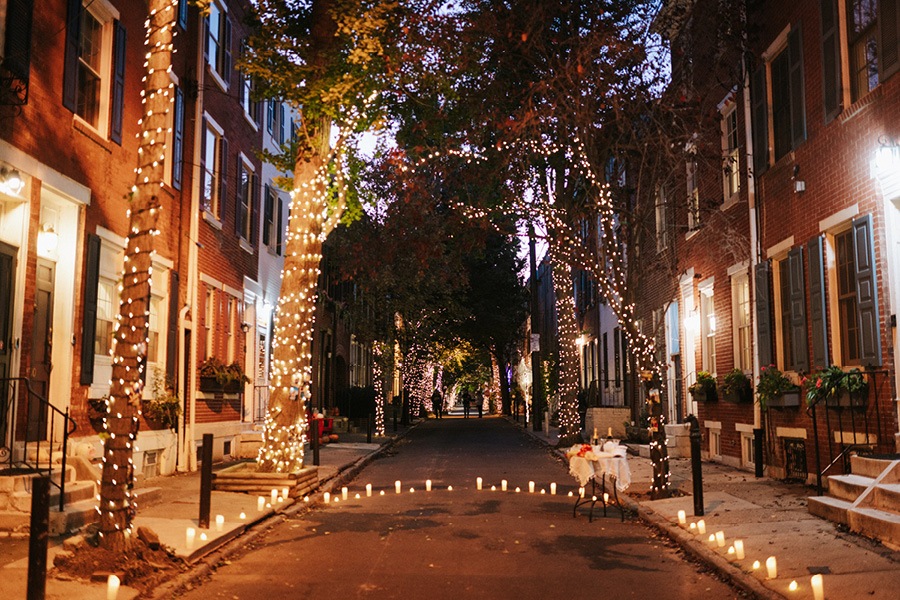 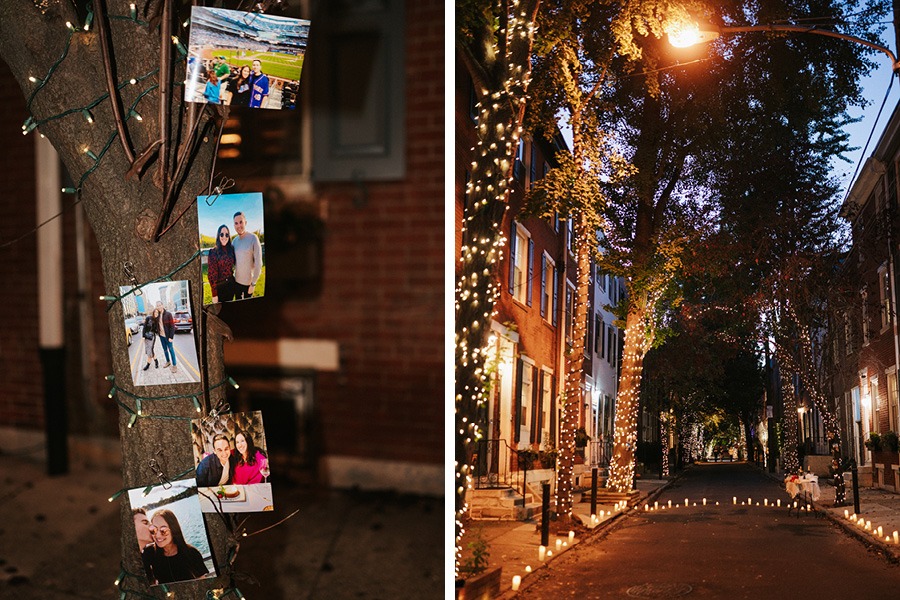 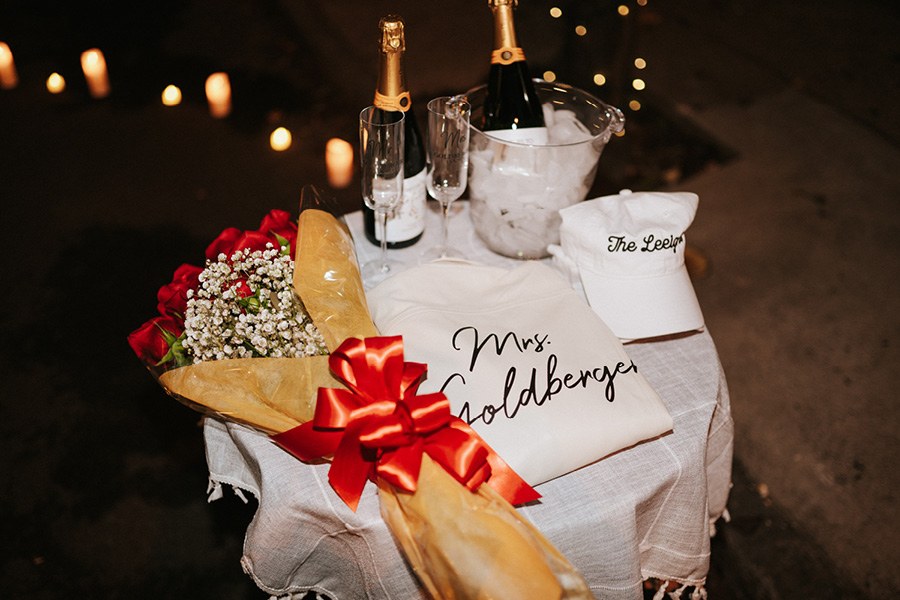 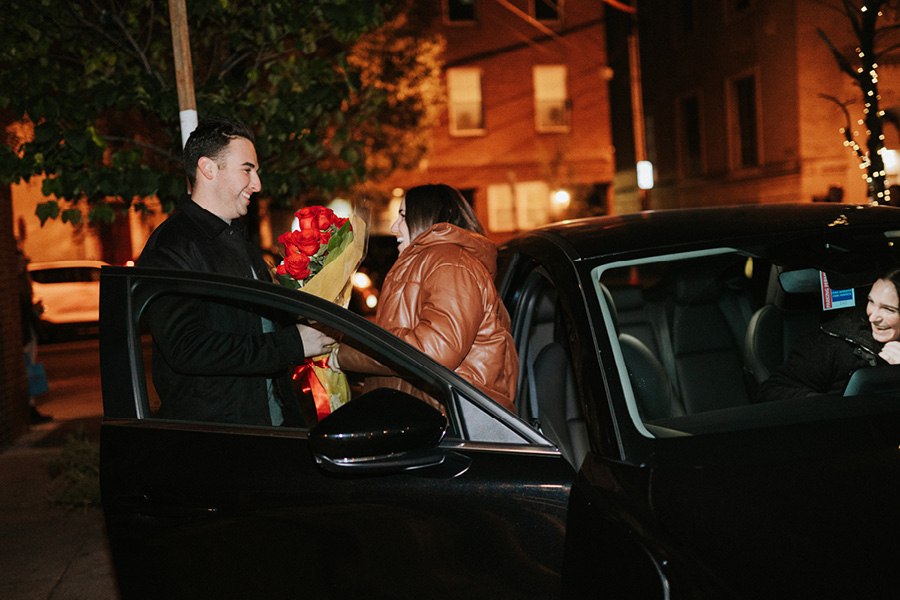 The couple: Leigh Kurtzman, a 27-year-old production associate at L. Priori Jewelry, and Lee Goldberger, a 26-year-old risk and insurance underwriter at Justworks, both of Rittenhouse Square 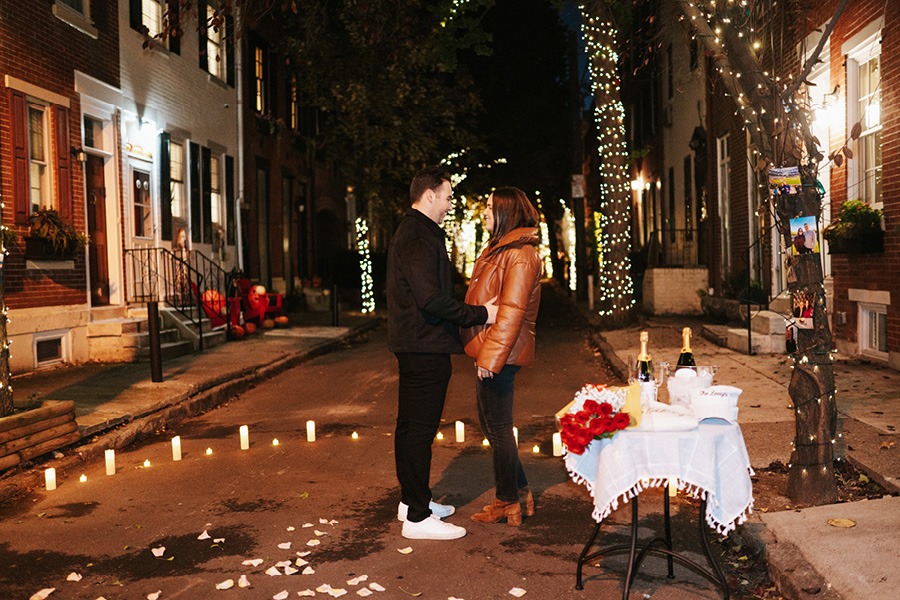 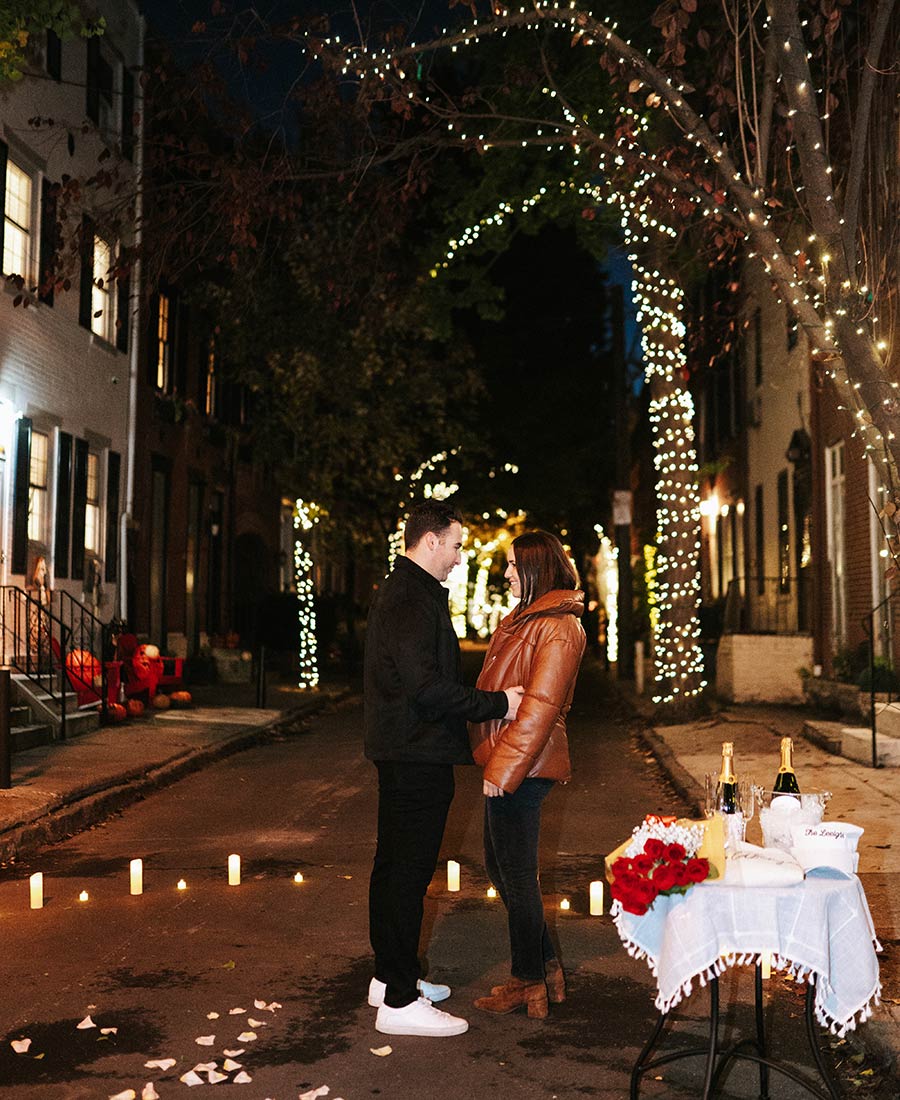 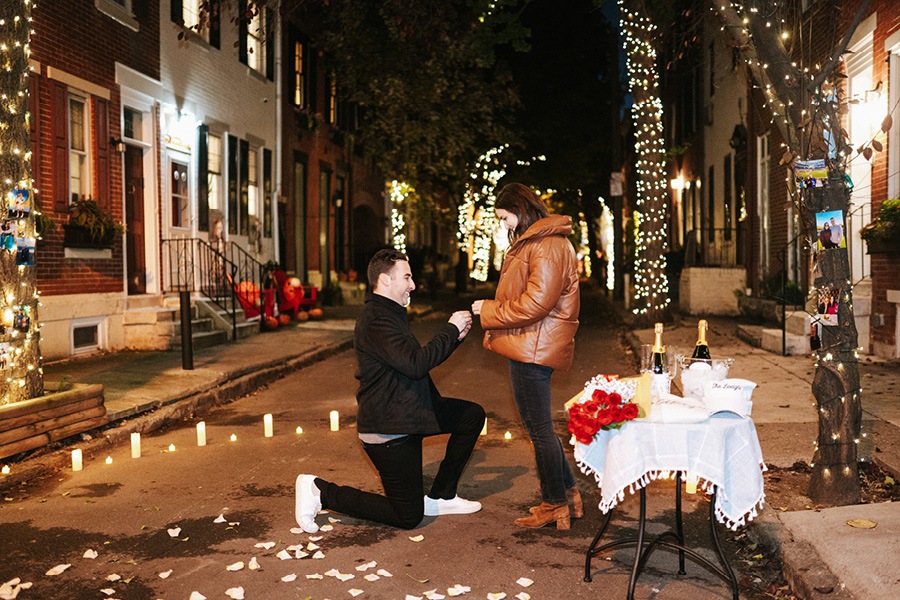 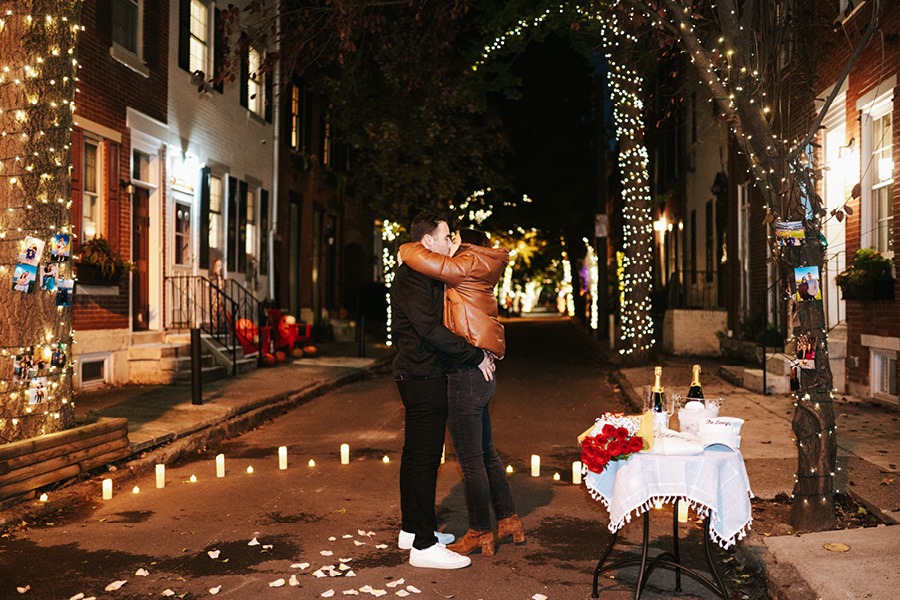 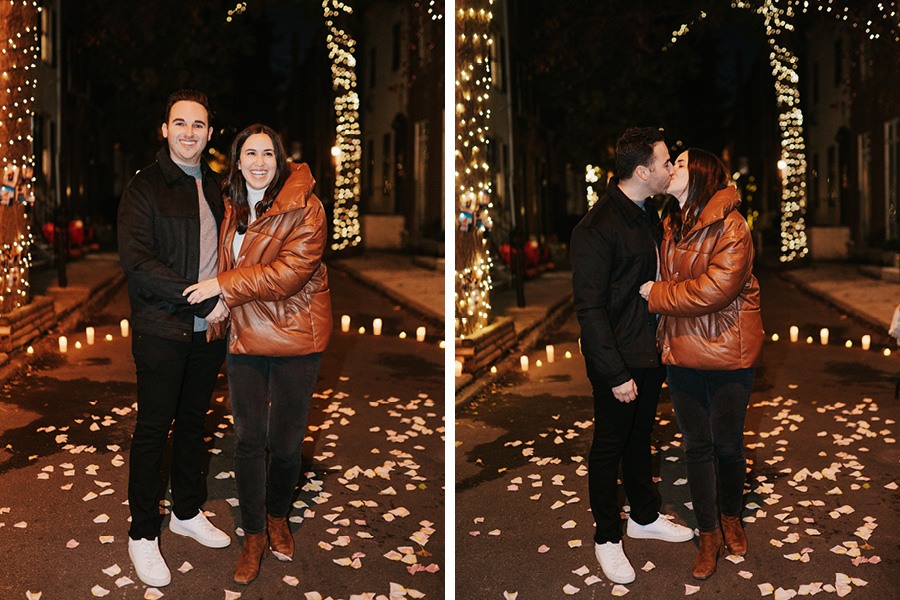 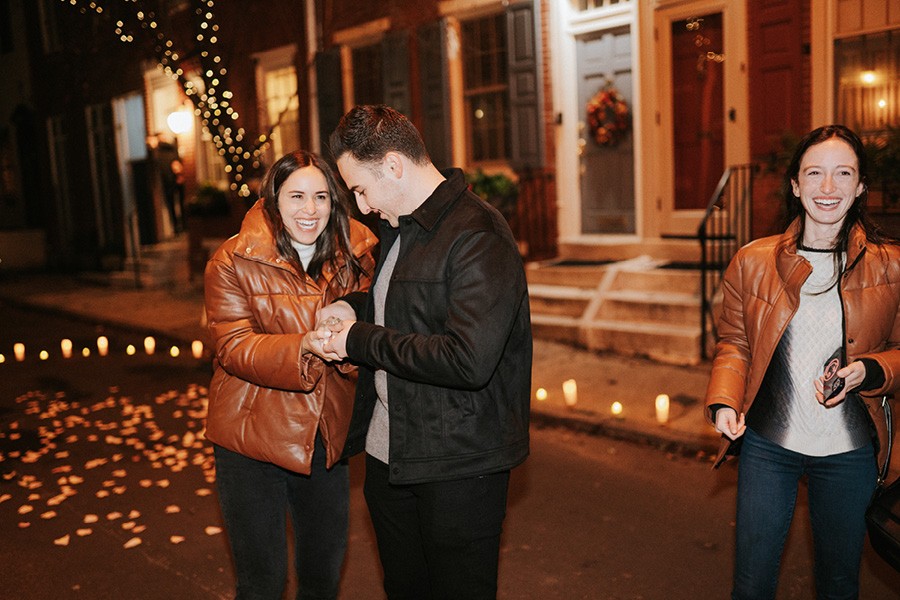 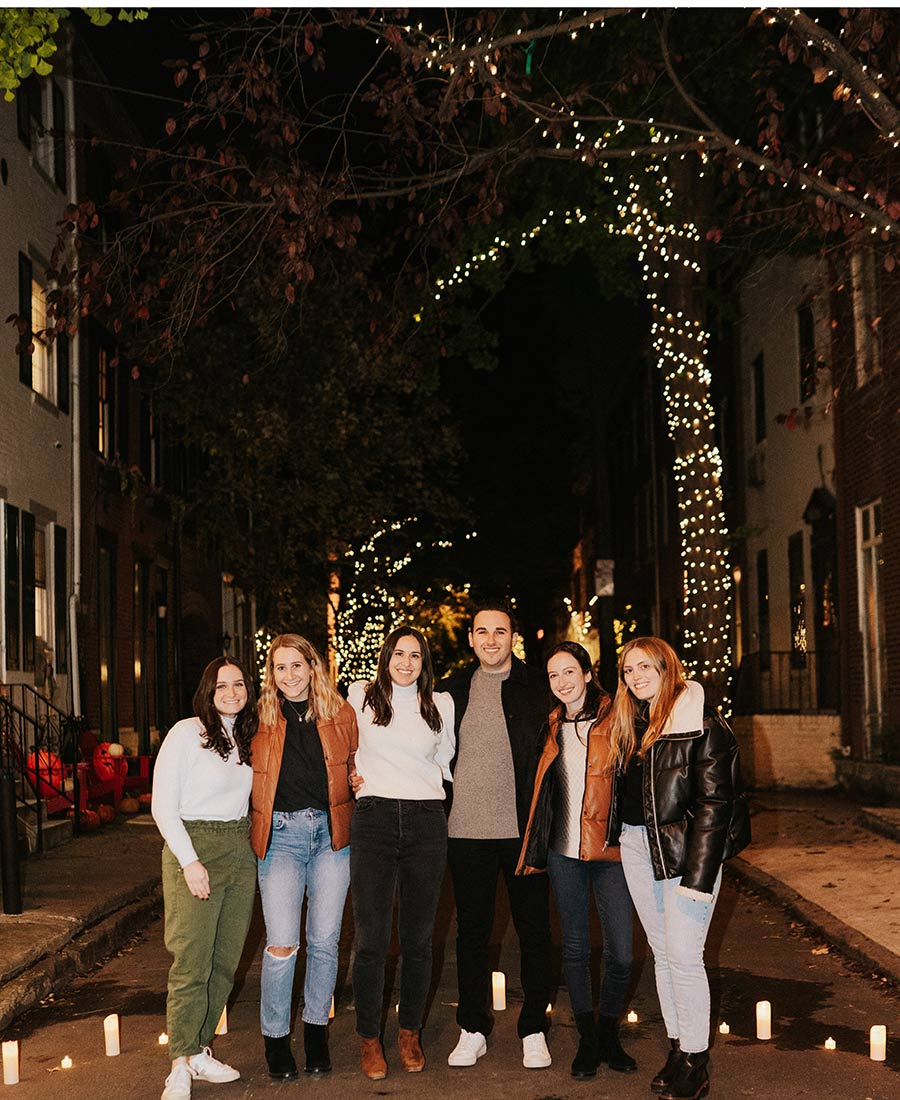 How they met: Though Leigh and Lee were attending different colleges (the University of Michigan and Syracuse University, respectively), they ended up on the same study-abroad program in Prague during their junior year. They had mutual friend groups and went out together at the start of the session. Leigh thought it was funny Lee had the same name, so she pursued him. At the end of the semester, they officially started dating — long distance while they finished college, then in the same city when they both moved to NYC after graduating. (They recently moved back to Philly, Leigh’s hometown.)

The proposal story: The couple dated for about five years before Lee popped the question. He spent a month planning the proposal; Leigh’s mother and best friends pitched in to help, too. They convinced Leigh she was going to dinner with two of her pals in Fishtown — until they dropped her off on Addison Street and said she was getting out there. Lee was waiting with a bouquet of roses, and the couple walked down the street together. “It was the happiest moment of my life,” he says. Lee had hung pictures from the lights on the trees and lined the road with candles. He’d also set up a table with champagne for the special moment, and Leigh’s favorite song, “Perfect” by Ed Sheeran, was playing on a speaker. Then Lee got down on one knee. 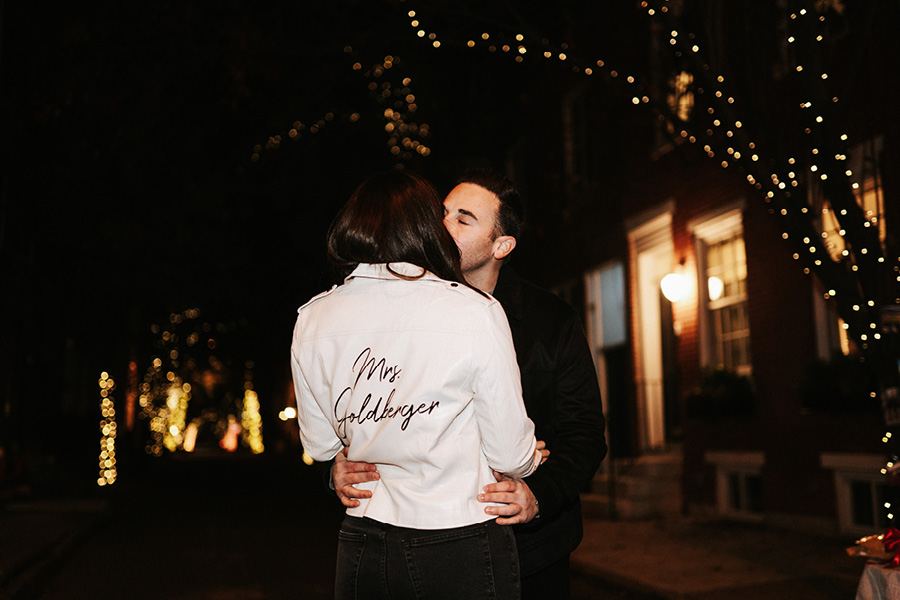 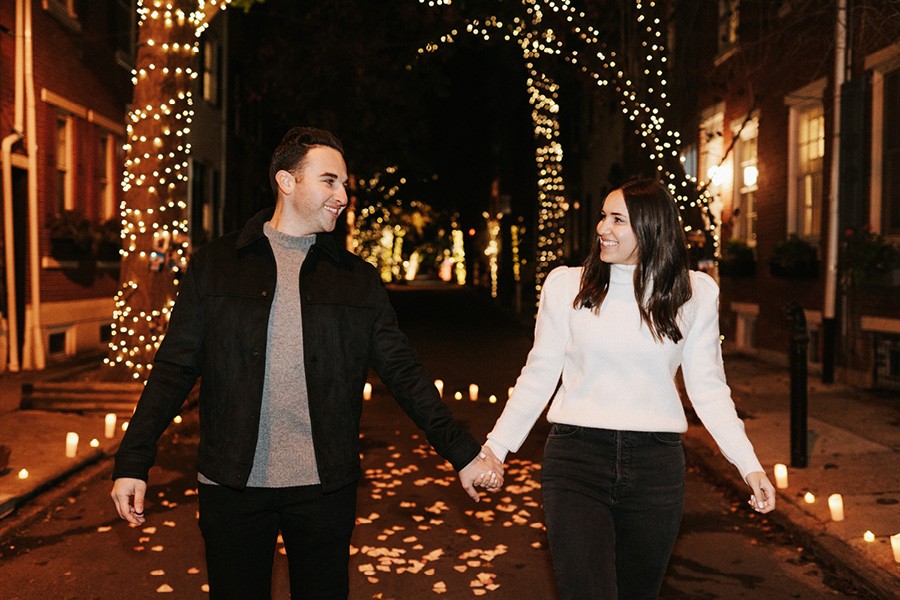 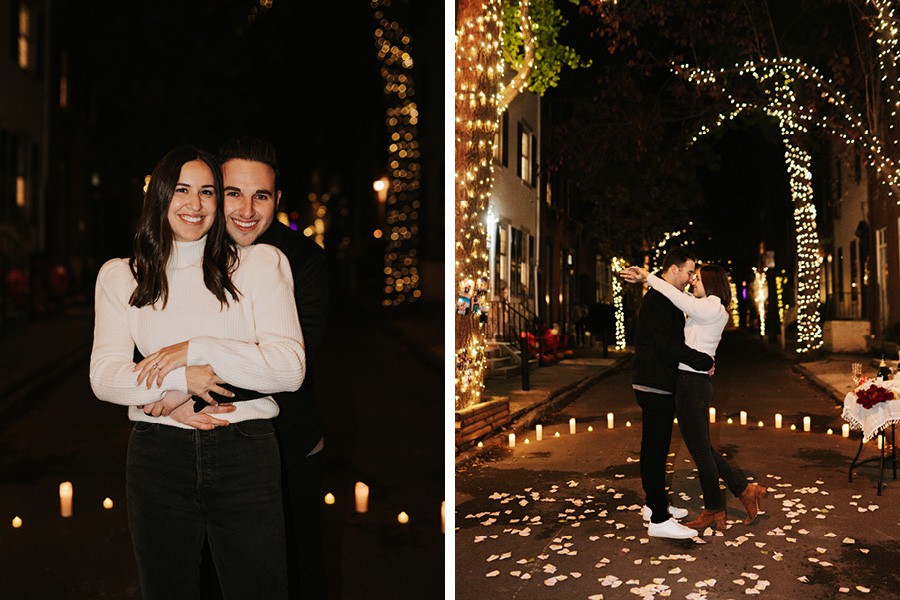 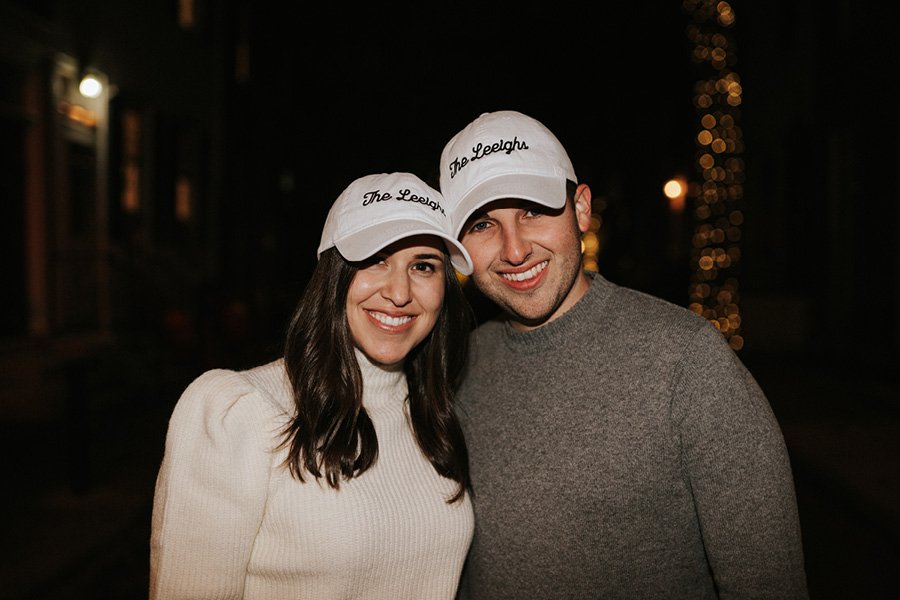 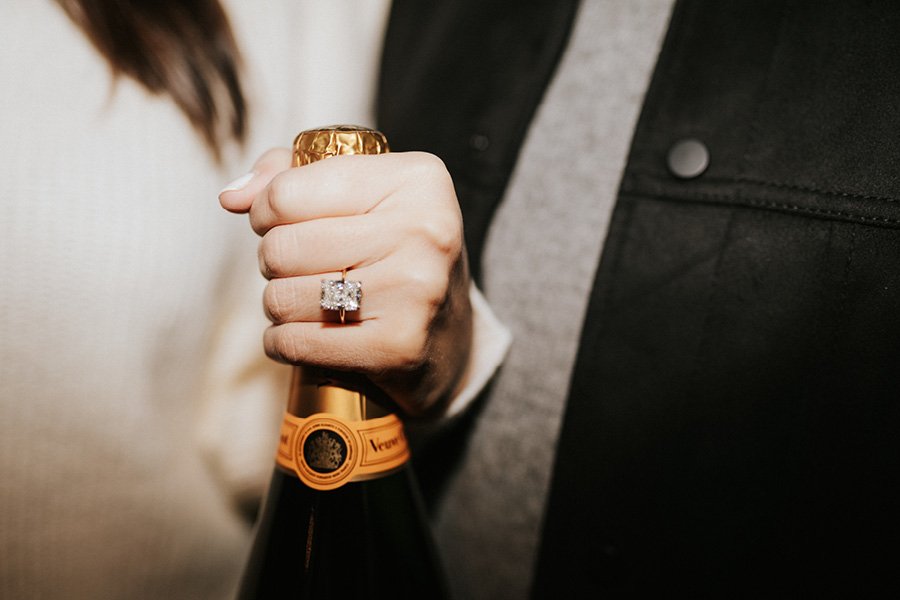 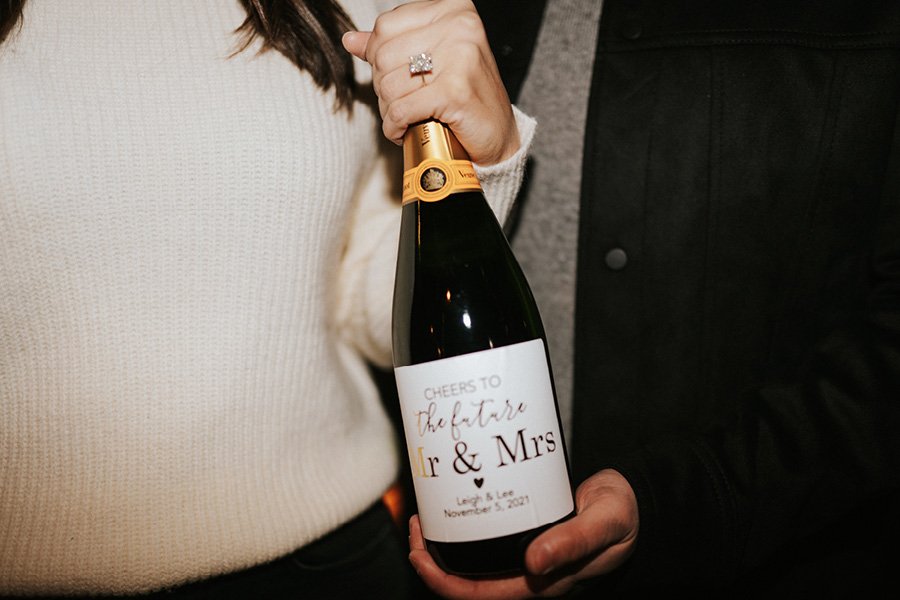 Leigh’s reaction: While she knew the proposal was coming because she helped design the ring — an elongated cushion-cut diamond set in a solitaire setting with a yellow gold band and platinum prongs — she still ended up being surprised, which was important to her. “The proposal was truly perfect and better than anything I could have expected,” she says. “Lee did an amazing job keeping the secret.”

The post-proposal festivities: After Leigh said “Yes!” she was surprised one more time. Her other friends came in from NYC to help with the big moment. (The couple’s dog, Barbie, was also on hand.) While the couple celebrated with dinner at Butcher & Singer, just the two of them, Leigh’s friends snuck into the couple’s apartment and decorated it with pictures and balloons. A week later, the couple and their families continued the festivities with dinner and a party at Attico Rooftop the following night. “It was so fun and special to be able to celebrate with all of our friends and family,” says the happy duo. 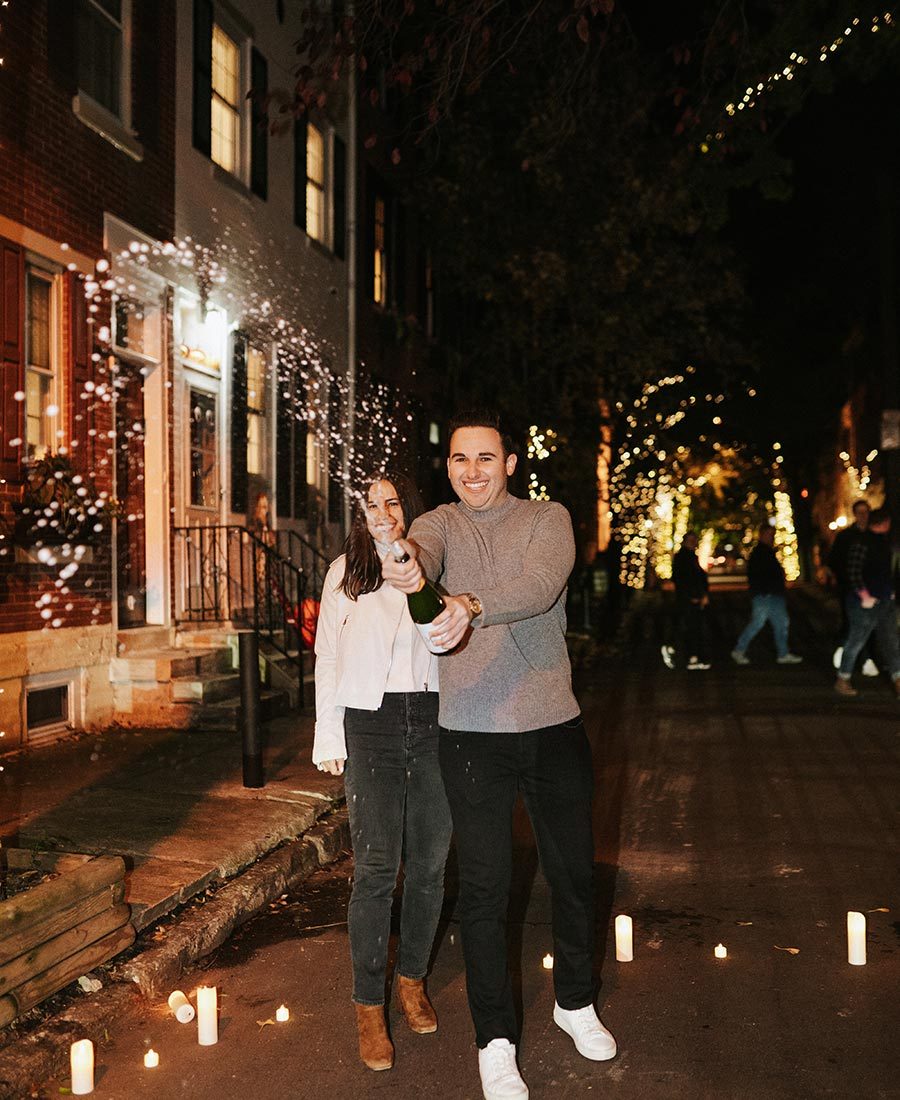 The wedding plans: The couple plans to say “I do” at the Four Seasons Philadelphia on March 25, 2023.