We Got Vaccinated on Our 31st Wedding Anniversary

The couple got their second shots at the exact date and time of their wedding, then went to the Capital Grille to celebrate. 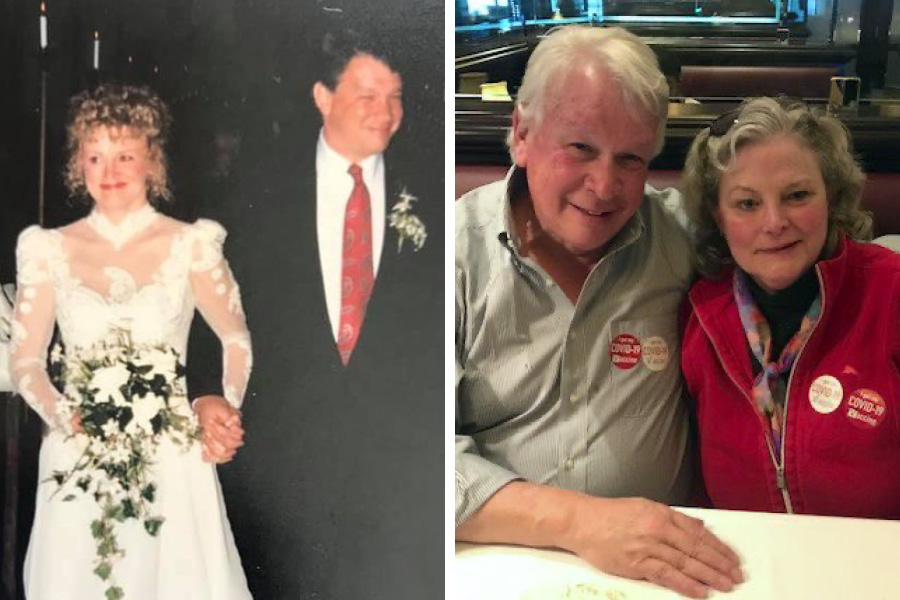 Suzanne and Kip Salus were married on February 24, 1990. They got their coronavirus vaccines on their 31st wedding anniversary. Photos courtesy of the couple

On February 24th, 1990, Suzanne, now 59, and Karl (a.k.a. Kip) Salus, 66, were married at St. John’s Catholic Church in Elkins Park. It was the same church where Kip was confirmed. The wedding took place at 11 a.m. and was followed by an 80-person luncheon reception. It was, of course, a day to celebrate. And little did they know that 31 years later, at the very same time and date, they would have another reason to celebrate — the Jenkintown couple got their second coronavirus vaccine shots and followed that with lunch at Capital Grille. Their 27-year-old son Ben, an actor living in NYC, shared the moment on Twitter, and we’re sharing their story with you. 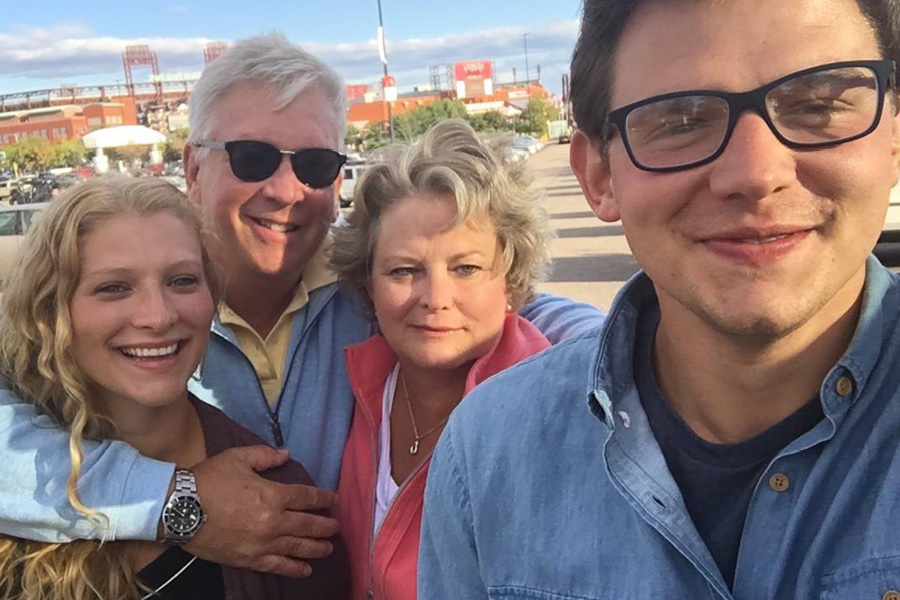 Katherine, Kip, Suzanne and Ben Salus before the pandemic

Ben: I stuck my nose in to make sure they got their coronavirus vaccines. My mom has a pre-existing condition, but they were just going with the rollout and had registered through Montgomery County. I kept asking if they needed anything. They had an appointment scheduled for about a month from now, around April. And I said, “No, that’s not right.” This whole pandemic has flipped the idea of taking care of your parents and where you are in life. I had to turn on the jets with my parents — we all have, as a society — in a way that I’ve never had to before.

Suzanne: It was good to have Ben over my shoulder, bugging me. That’s all he did, continuously. He kept saying: You have to get this stuff done. I’m a pulmonary patient at Temple. I called back in January, and at the time, they weren’t doing appointments. I was looking at the Montgomery County site, and it seemed like a free-for-all to schedule something. So on a snowy day in February, I decided to call the lung center to reschedule my regular checkup, which had been canceled back at the beginning of the pandemic. The receptionist said the center was closed because of the snow but asked if there was anything else she could help with. I asked if she could help me get my shot. She gave me a number, and I called it. Both Kip and I were registered at Temple the next day, February 3, 2021, for our first vaccination. It was the first day they were doing patients. [Editor’s note: A patient portal has since been set up.]

The second appointment had to be 21 days later because it was Pfizer, on February 24th. I said, “Oh, my goodness, that’s our wedding anniversary.” Then it was scheduled for 11 a.m. It was the same time we got married. Isn’t that funny? It was all by fluke that we got the appointments.

Kip: We didn’t really think about it too much beforehand. But on the 23rd, it suddenly dawned on us: We were both going in the car together, which we don’t do too much anymore because of the pandemic. We knew we had to go somewhere afterward. It was spur-of-the-moment. We decided to go to Capital Grille. Normally when you go, it would be busier, but only a small portion was filled. It became a little festive, by happenstance. Your mind isn’t on your anniversary or even birthdays in this environment.

Suzanne: When I sat down in the booth, it was a sense of relief. After having the second shot, sitting there with my husband of 31 years, I was relieved that we made it this far, and through the pandemic. We had glasses of champagne and a cocktail. It was, like, 1:30 in the afternoon, and we thought: “Isn’t it a little early? Before we got married, we did this a lot!” The servers brought us an anniversary dessert, and someone took our picture.

Ben: I wasn’t there, but I made sure they would try to get a picture. I knew there was some kind of feel-good moment here, especially for people who are going through this pandemic with significant others. It’s so emotionally fraught.

Kip: The toughest part of the pandemic has been the lack of mobility to do things. Nothing really changed Monday to Friday. I work at my desk, and Suzanne goes to work four days a week. We’re in a stage of life where we could do things, but it was like being handcuffed. [Editor’s note: Suzanne works at a CPA firm, and Kip, while retired, manages assets.]

Suzanne: It was peaceful during the summer to sit outside; it was nice and quiet. People would walk around outside and keep their distance. But we Zoomed holidays. And my mother passed away in October, and I had to do a Zoom funeral because I couldn’t go back to Michigan. [Editor’s note: Suzanne is originally from that state.] And everyone has worse stories than we do in reference to losing loved ones. We were very fortunate.

One of the greatest things to come out of the pandemic was that our daughter got engaged in September. We are planning the wedding for March 2022.

Kip: We miss our kids. Ben has been kept in isolation from us, really only able to connect with telephone and Zoom. Helping with our vaccines and sharing our story was his way of expressing closeness to the family. It shows caring and involvement. He’s up in NYC doing his own thing, but he’s much more involved mentally than that.

Ben: My parents had a great mind-set about the pandemic. I ended up spending about six weeks with my sister and her fiancé, Michael Phillips, in Warminster, and I got to see my parents a lot, which was really special but really hard. I couldn’t hug them.

It was important to me to share their story. My parents have provided my sister and me so much, and they truly mean the world to me and are my best friends. Love and marriage have a fluid definition, and I know they are exemplary people for how they’ve cared for our family throughout the years.