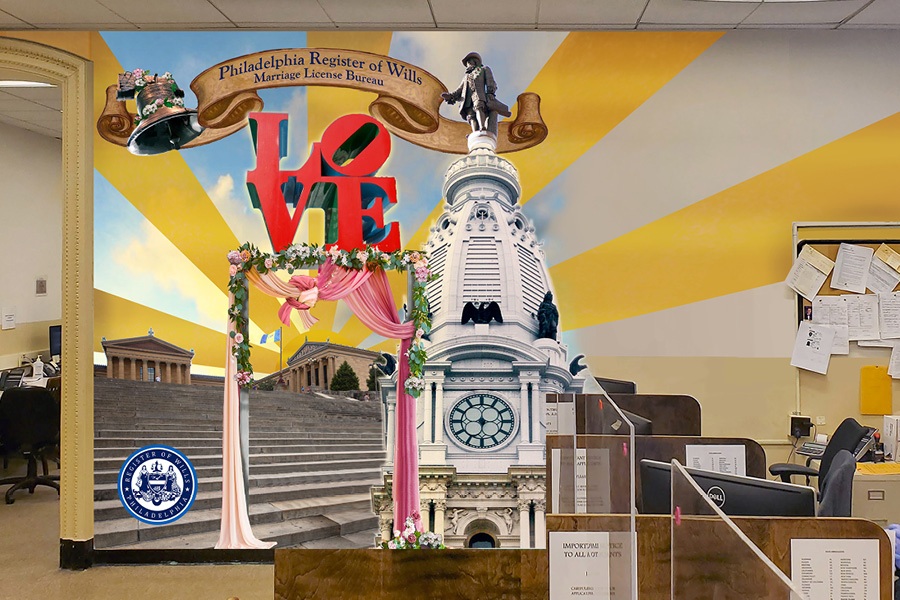 A rendering of a new Philadelphia-focused wedding mural going up at City Hall. Rendering and photos courtesy of the Marriage License Bureau at the Register of Wills

On Valentine’s Day 2020, before COVID-19’s impact had truly been realized and quarantines went into effect the world over, the Marriage License Bureau at Philadelphia City Hall was filled with couples who wanted to say “I do” during a mass wedding event. Ten judges officiated the 50 ceremonies, and guests (two per duo) watched happily as folks pledged their love to one another. While there won’t be any group marriages this year (yes, because of the pandemic, but also because V-Day is on a Sunday), the bureau is introducing a selfie wedding mural filled with landmark local spots — and those visiting for marriage license appointments will be able to snap photos by end-of-day Friday.

A collaboration with Mural Arts Philadelphia, the installation by staff artist Nathaniel Lee came about as a way to provide a sense of place for couples getting their marriage licenses. After obtaining their documents, duos would often pause in front of a lackluster wall in room 413 to take a celebratory selfie. “Everybody wants to pose in front of something in Philadelphia. That’s what we’re known for,” says Register of Wills Tracey L. Gordon, who took office back in January 2020 and calls herself a hopeless romantic. Initially, she wanted a photo booth, but then she and the staff came up the idea of a mural — one that’s uniquely Philly, filled with some of the historic spots where duos celebrate weddings, proposals and engagements. 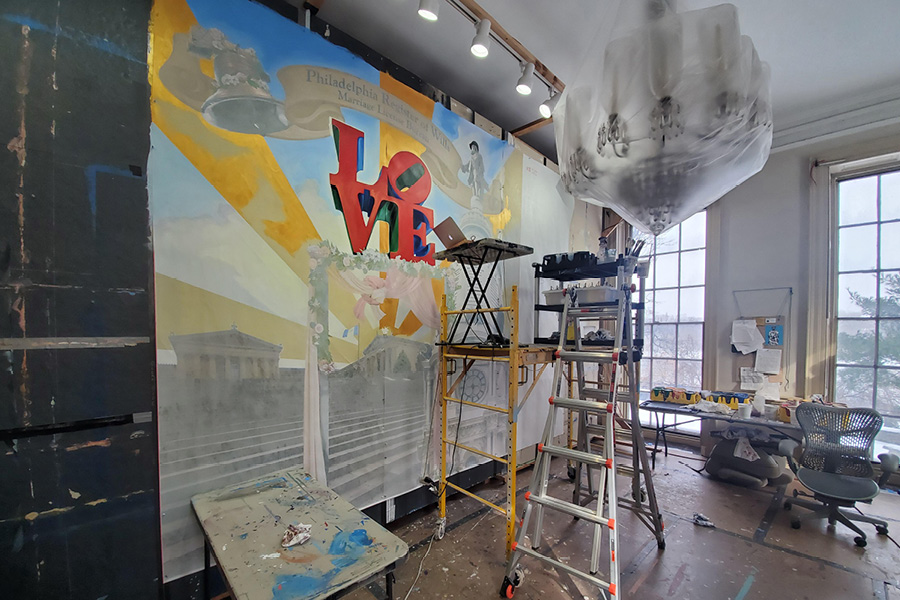 But the LOVE statue, the Philadelphia Art Museum steps and the City Hall images you see in the mural aren’t simply straightforward depictions, notes Lee: “I took some artistic license. I didn’t want to re-create a landscape that anyone could go to on their own and take a photo. I wanted to make it a stylized collage, so you have to be here to take this photo, and when you are here, you know you’re in Philadelphia and not in some generic chapel.”

That’s why the statue of William Penn is turned a little bit — he’s blessing the couple, rather than the city. The steps are symbolic, too. “Marriage is a journey. Climbing those steps—it’s a tough journey, but it’s worth it when you get to the top,” says Lee, who’s been married since 2003. And he made the LOVE statue into a wedding arch — as a nod to couples who’ve been impacted by the pandemic and are holding impromptu micro-weddings or elopements or self-uniting with emergency marriage licenses. (About 1,000 were issued between April and July 2020.) “A lot of people were getting their certificate and going back to their living rooms,” says Lee. “Unless you want to do a green screen, you aren’t getting any specific scenery in there. So doing the wedding arch was a specific shout-out: Listen, you can do it here.” 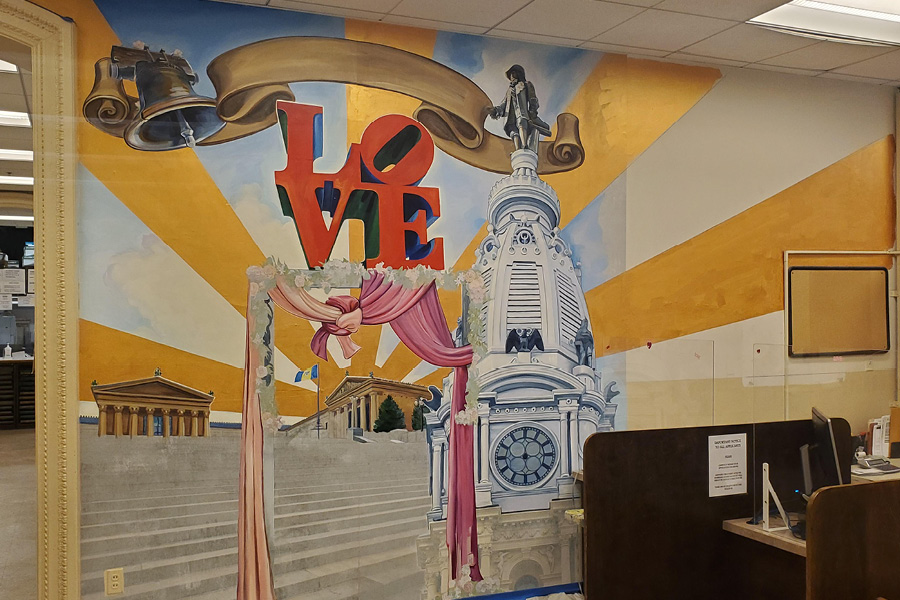 The near-complete mural, which will be finished by end-of-day Friday

In a typical year, about 400 to 500 civil ceremonies take place (excluding the mass event on Valentine’s Day), with about 10,000 licenses issued. (Fun fact: Former Supreme Court justice Thurgood Marshall married his first wife in Philadelphia; the records are on file at City Hall.) In 2020, 107 civil ceremonies took place before the pandemic put things on hold, with a total of 5,620 licenses issued over the year. While ceremonies still aren’t occurring, marriage licenses are being offered by appointment only. (The ROW isn’t open for walk-ins.) About 200 such appointments are scheduled for the rest of February, with some 871 licenses already issued this year. And the couples who have visited since Lee began putting up the panels on Monday are getting a sneak peek. (He painted on mural cloth in his studio beforehand, so the piece was 90 percent finished before the installation.) Lee notes that some were already taking pictures in front of the nearly finished mural.

The installation is permanent, so you can snap that selfie whenever you make it official. “It’ll be a backdrop for you and your family and generations to come,” says Gordon. Ready for your Big Day? Marriage license appointments can be made here.