This is What Drone Wedding Photography in Philly Looks Like

It gives you a totally different POV on weddings. 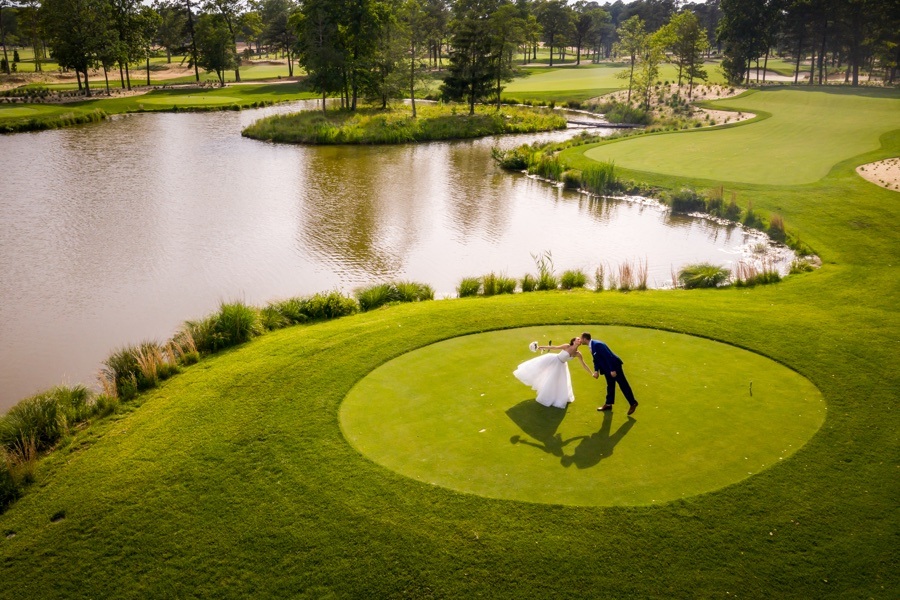 Drone photography has been gaining popularity for years now, and though drones might not be the most obvious choice for wedding and engagement photos — I mean, whirring airplanes don’t exactly scream “romance” — they do open up possibilities for breathtaking, elevated angles you don’t get in typical wedding photography. That means shots that can add a wow-factor  to your wedding album, , since the landscapes of the Rail Park, Boathouse Row and Kelly Drive, plus all your favorite wedding venues, look a little different from above. Here, we chatted with Joseph Gidjunis, owner of Manayunk-based JPG Photo & Video, to find out the need-to-know about drone wedding photography in Philly in his words — and see some gorgeous photos, of course. 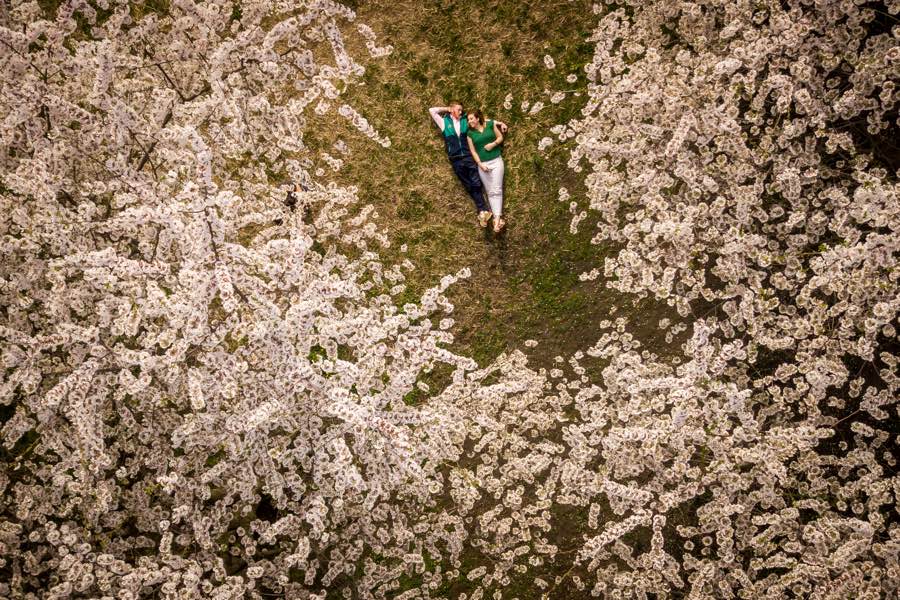 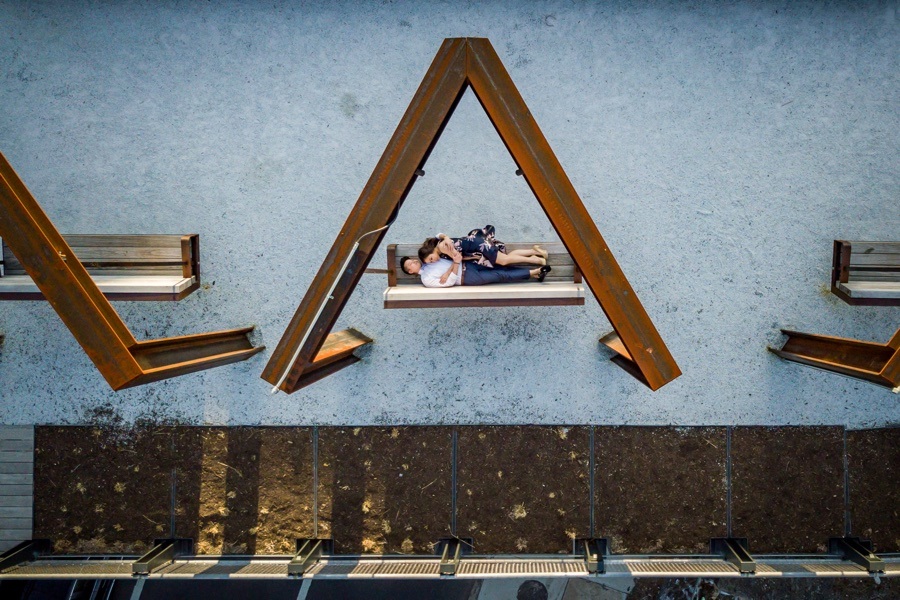 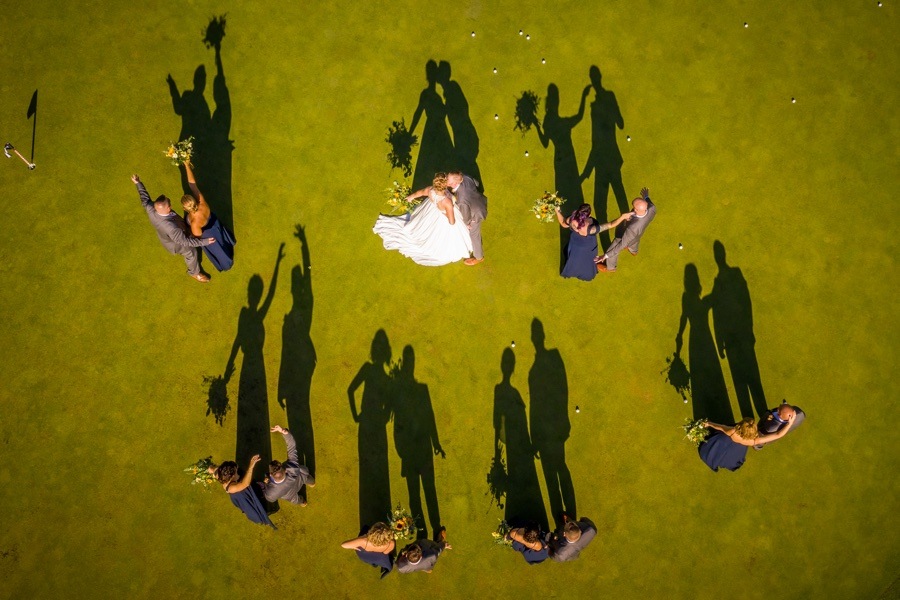 Why it’s such a fun way to shoot: “Drones are able to offer interesting angles nobody has seen before. I’m always looking for trends and finding a new way to tell a story. In art, there’s a saying that you’re never doing anything new. It’s all been done before, and you’re just mimicking someone who came before you. But with drone photography, I’m placing my camera somewhere nobody has in history. I’m able to photograph people in a way that had been previously impossible. I’m excited every time I fly because there is an opportunity to be original and create art that makes people stop and savor a moment.”

Why it’s perfect for wedding and engagement photography: “Everyone has seen drone shots capture beautiful landscapes. But few photographers are using them to document a personal emotion and connection from the air. And I think as drones become more ubiquitous, there is a growing excitement about couples and families around including visual perspective in the final product.”

One of the best wedding shots he’s done: “One of my favorite portraits with a drone was captured last month at the Doylestown Country Club. We had a beautiful day with strong sun casting shadows on the putting green. I directed everyone to be playful and notice their shadows. I’ve been fortunate to gain the trust of many couples and wedding parties because I’ve asked them to lie down on boat piers, on rocks and on the gravel around the Logan Circle Fountain — another one of my favorites. I love looking for natural textures and shapes that exist across the region, from Ridley Creek State Park to Kelly Drive.” 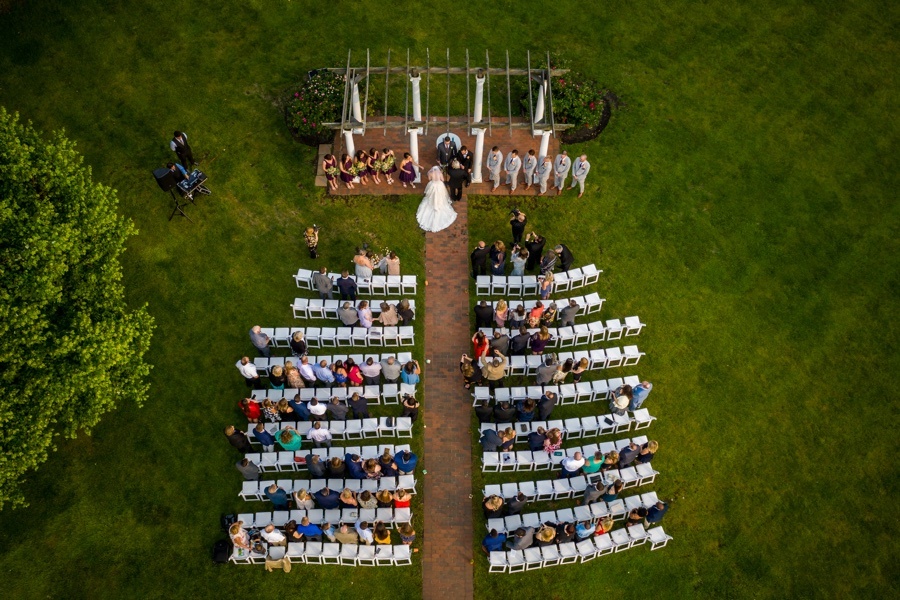 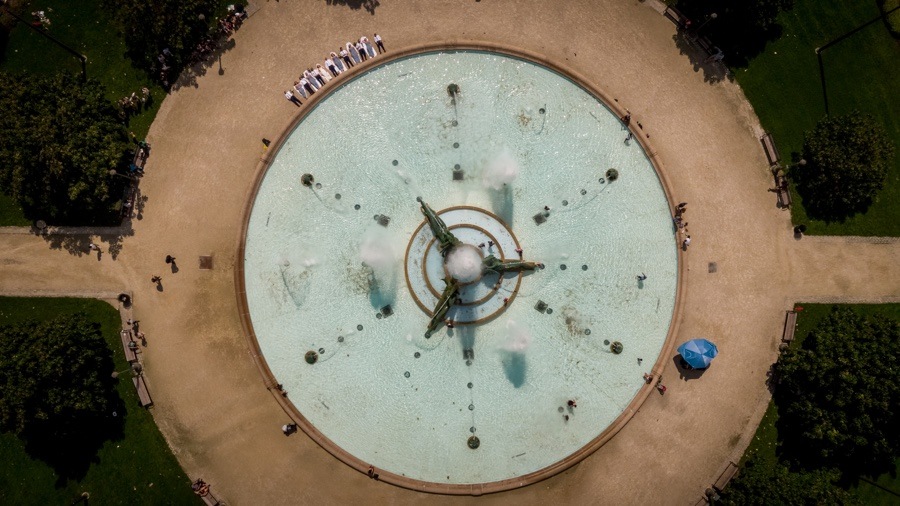 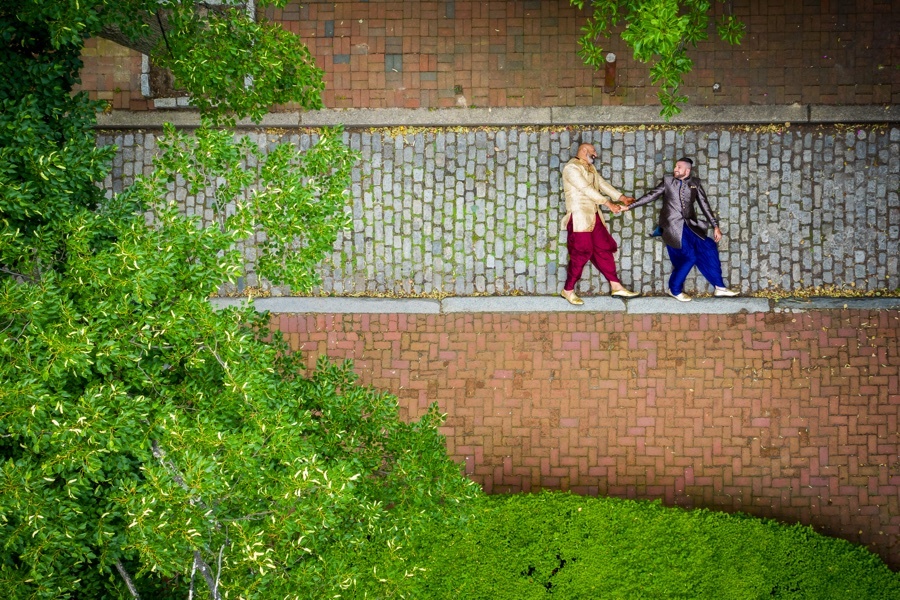 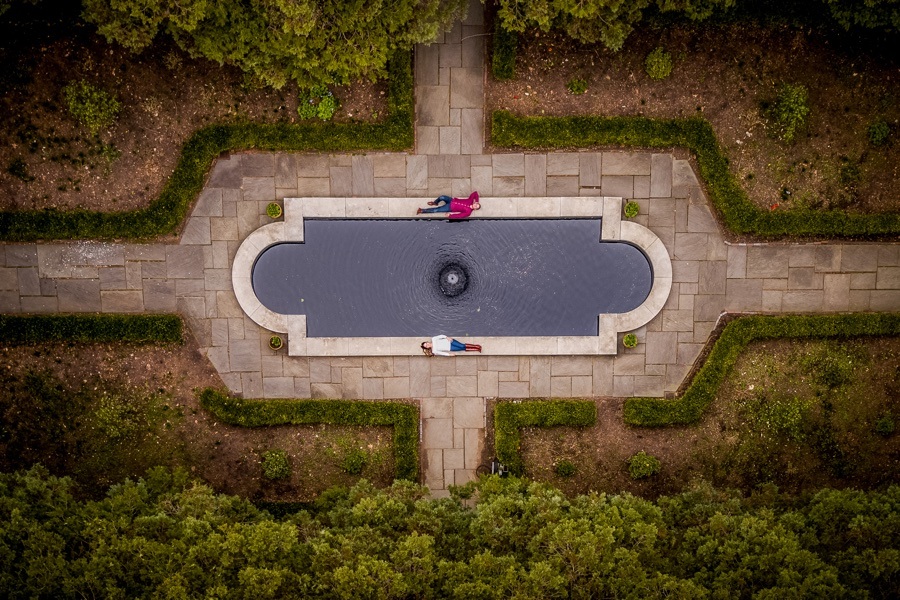 How to know where (and when) it’s legal to fly in Philly: “The biggest no fly areas are around airports, helipads and National Parks — things Philadelphia has aplenty. Fortunately, drones like mine, which are from DJI, won’t even allow flight to occur in restricted areas. There are also temporary restrictions during professional sporting events. During say an Eagles home game, a 3-mile restricted zone is enforced around the stadium, so this covers most of the city south of Market Street. I recommend two Apps. The first is AirMap which shows the drone pilot their location and the airspace the drone would be flying in. If I’m clear, and weather permitting it’s safe, I’ll open up another app called Verifly which is used to purchase insurance on demand for as little as an hour in a specific radius. Then I do a scan of the area to look for possible obstacles like power lines or birds, and best practices would have a partner or visual observer with you to watch for anything coming near the flight path of your drone.”

How to prevent drones from becoming a distraction during a wedding: “Recently, I’ve taken the drone in the air during the entrance of my outdoor ceremonies. I’ve flown it in the back in order to balance being respectful of the ceremony with the additional noise. I’ve asked guests if they heard the drone, and some said they knew it was there, but said it wasn’t overpowering or distracting. The new quieter blades of the smaller drones are better than previous models. And I always land before the speaking begins. In addition, when I fly, I have a team with me, so there is another photographer at the front of the wedding capturing the must-have images.” 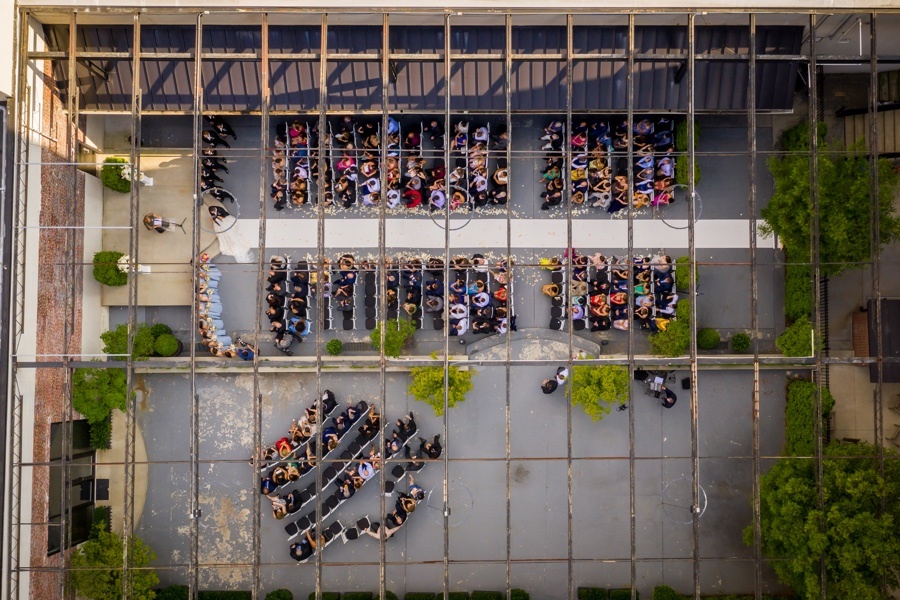 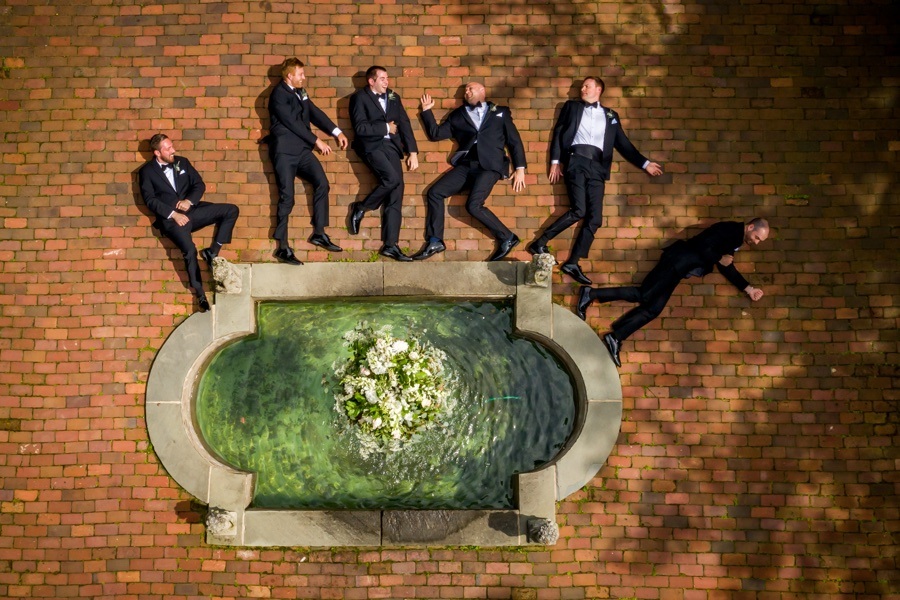 What type of training is needed: “Using a drone recreationally doesn’t require any training, but using them professionally does require passing an FAA administered test called the Part 107. Safety and common sense are extremely important when flying. While the latest models have impact avoidance sensors, drones are capable of causing a lot of harm for any careless pilot.”

The final word: “Drones can be toys, but in the hands of a professional artist, they’re an amazing tool that could capture a moment you never thought possible.” 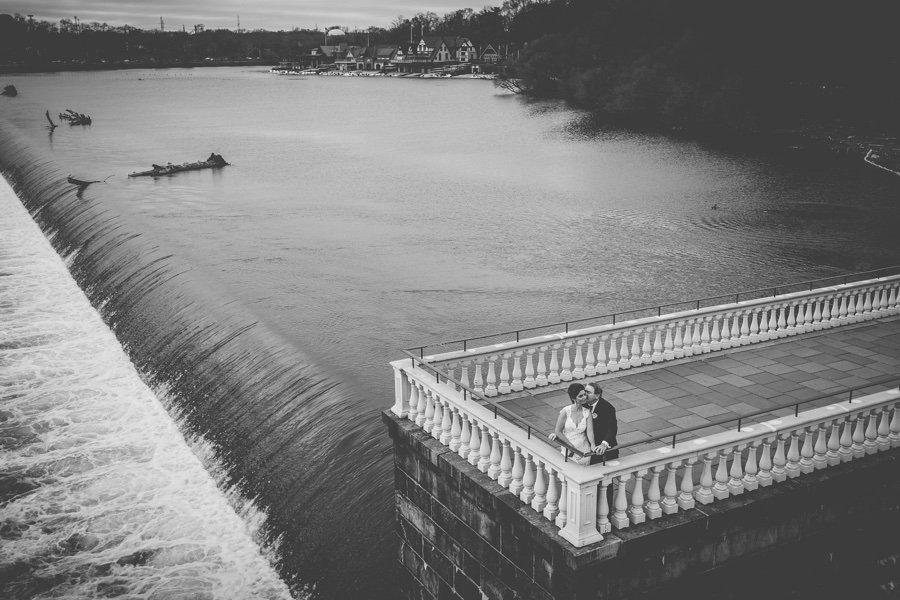